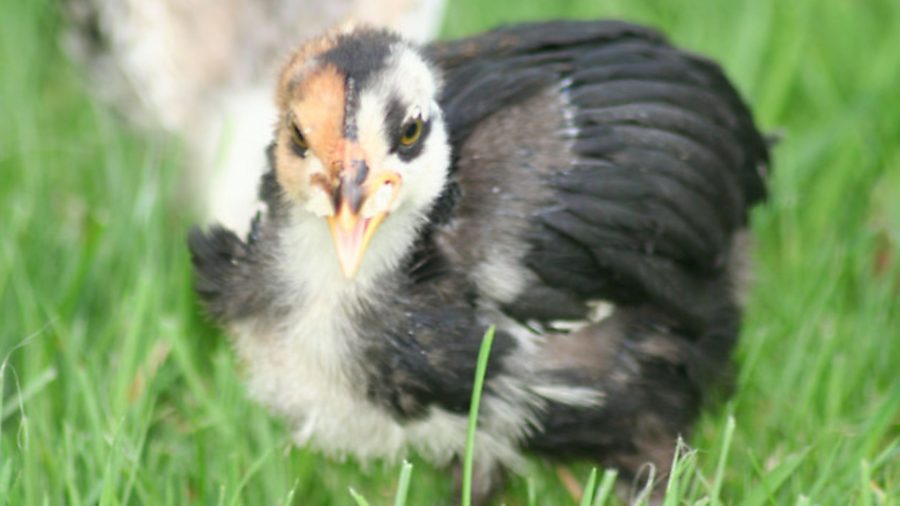 A chick that decided to be that little bit different

You may have noticed that your chickens have strong bilateral symmetry. This means that if you take an imaginary line between your chicken’s eyes, the two sides of its face are a mirror image of each other. As with all faces, there will be small differences if you look closely, but to all intents and purposes, both sides are identical. If a chicken has golden feathers around its left eye, it will have golden feathers around its right eye. If the feathers are white on the right hand side of its face, they will be white on the left hand side, and so on.

One of the joys of keeping chickens is that as soon as you accept something as a hard and fast rule, something happens to prove you wrong. In this case it was the hatching of Wonky, the chick you can see in the picture. Wonky most definitely does NOT have a symmetrical face.

This asymetry is unusual, and I have certainly never seen it before. The reasons behind it are complex, but it happens on a genetic level when the embryo is developing in the egg. The first division in the fertilised egg carries genes that code for colour on both sides of the body, and if there is a mutatuion at this level then the two sides of the body may have different colours. I have heard of a case where a hen had one yellow leg from a Rhode Island Red father, and one white leg from a Light Sussex mother, but young Wonky was the first time I have ever seen such a thing for myself. She is one of a clutch of 12, and the only one to show this asymmetrical plumage. Apart from her curious face, she is in perfect health and developing well.

With animals bred as extensively as chickens, it is not surprising that tales of chicken oddities are well documented. Some of the more extreme ones include two-headed chickens, three-legged chickens, and a particularly odd sounding bird with one head and two bodies. It is even possible to have a bird which is female on one side and male on the other, a condition known as gynandromorphism.

So, Wonky is not as unusual as all that. Still, I am looking forward to seeing what sort of eggs she lays….