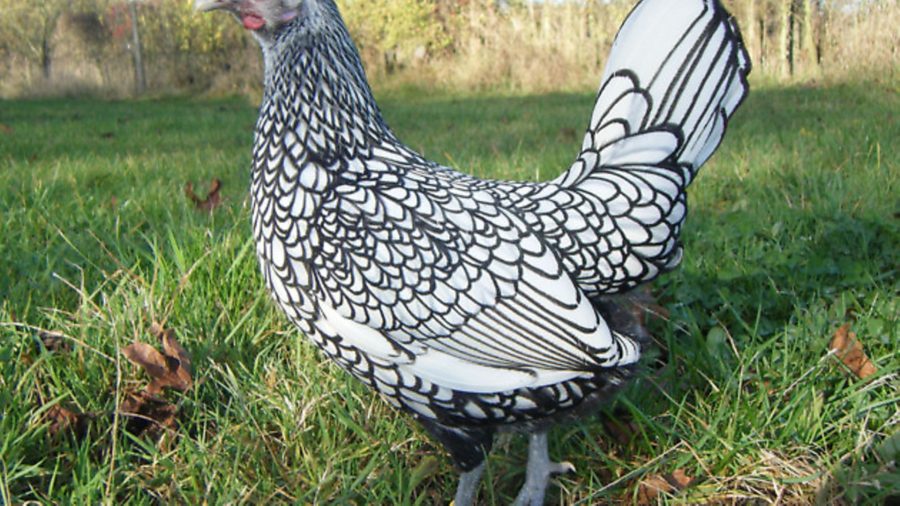 Robin Creighton has achieved phenomenal success at poultry shows with his Sebright bantams. He talked to Terry Beebe There are not many poultry breeders who have achieved the incredible success of Robin Creighton. He has won Supreme Champion at the National Poultry Show – the ‘Crufts’ of the poultry world – three times, beating more than 6,000 other birds on each occasion! Clearly, Robin and his beloved Sebright bantams have something very special. I paid him a visit to find out more. Needless to say, I found a man who is utterly dedicated and has worked very, very hard for that success… How did you get started with poultry?

In 1977, when I was four years old, my parents started giving me pocket money of 50p a week. After a while, my mum asked me what I would like to buy. I decided I would really like a bantam. A lady in our village sold birds and I soon became the proud owner of a Silkie cross for just £1.50. She lived to the age of 15 and hatched many chicks including two ducklings from eggs set under her. When I was a teenager, a school friend showed poultry. After going to a show I thought this is the hobby for me!

What is your favourite breed?

What first attracted you to the breed?

I set my heart on Sebrights after looking through many books. Their sheer beauty and neatness is what attracted me – their perfect lacing is so beautiful.

Where did you get them and how much did you pay?

Despite been advised they were not for beginners, I managed to acquire a trio of gold’s for £25 back in 1987.

Do you have any fond memory of a particular bird?

In 2005 I bred a lovely pullet. Unfortunately that was the year of bird flu and the National and Federation shows were cancelled. I took her to Reading Classic Show and she got Champion True Bantam out of 926. After this she became unwell but I managed to get her better and took her to the North Yorkshire County Show. I was over the moon to get Supreme Champion with her out of 845 entries. I then took her to the next two largest summer shows that year, Bakewell and Nantwich, where she also got Show Champion. She would stay with us in the hotel room the night before the show! She has died now and is buried under the apple tree in the garden.

What is the breed like as an egg producer?

Being exhibition bantams, their egg production is low. A pullet can lay more than 50 eggs in her first year. As the years go on, production reduces and after the age of 5 virtually no eggs will be laid.

Are there any particular challenges in keeping this breed? Do they have any special needs?

As a breed they are prone to Mareks disease, but there are some resistant lines within the breed. I do vaccinate my chicks at day old. Chicks are infected from adult stock at a young age so I incubate all my eggs and vaccinate them and rear them separately to my adults.

Sebrights do tend to peck each other and the feathers soon get damaged when in a group together. The cockerels and cocks are placid and multiple cocks and cockerels can be kept together as long as they have enough space.

On introducing males to each other they will have a little fight but then, within a few days, they generally settle down well. This really helps when you have lots of breeding birds.

The females can really attack each other and I have known a couple of females to gang up on another bird and cause some real damage. Introducing females to each other needs to be done carefully and they need plenty of room to get away from each other

Have you bred from them, and was this a success?

Sebright females will go broody and rear chicks successfully. As long as you don’t get your stock too inbred, I would expect to get over 90% fertility. They rear well and are off heat and in sheds with grass runs at six weeks of age. Over 95%of chicks hatched are reared to adulthood, so there are few losses. They are fed chick crumbs to five weeks of age, then growers pellets to six months, then layers or breeder pellets afterwards.

Tell us more about your show success

I go to on average eight shows a year and only show the pullets. After the first moult they lose the desired almond shaped lacing. I have great success at the shows, winning Supreme Champion at the National Poultry Show, the ‘Crufts’ of the poultry world, three times – beating over 6,000 birds on each occasion. I keep detailed records of all my shows. I have had a total of 55 Show/Reserve Champions, won 220 trophies and beaten 44,500 other birds.

Do you have any tips for others who might try this breed?

Always try to acquire the best possible stock as this will enable you to breed better quality birds. If you want to breed for exhibition and improve your birds you need to breed 50 or more. Getting the type and all the lacing right is difficult. If you only breed 20-30 it is likely your strain will go backwards. When I created my strain I was breeding 100 a year to ideally only select 10 birds out for breeding. Rear the cockerels and pullets separately. This will reduce feather damage in the youngstock. Another important point is not to keep too many birds thus allowing your birds to have as much room and space as possible.