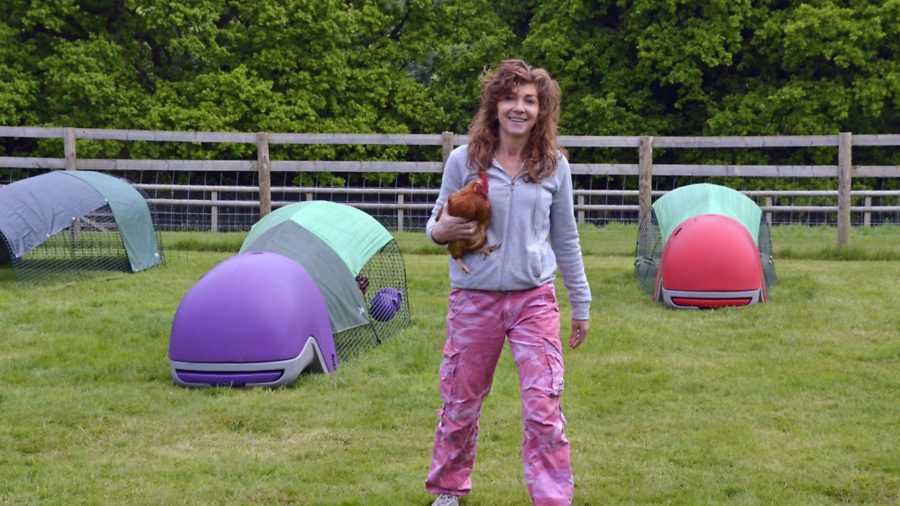 The ebullient Rachel Misra runs a boarding service for chicken owners who jet off on holiday. Susie Kearley pays her a visit 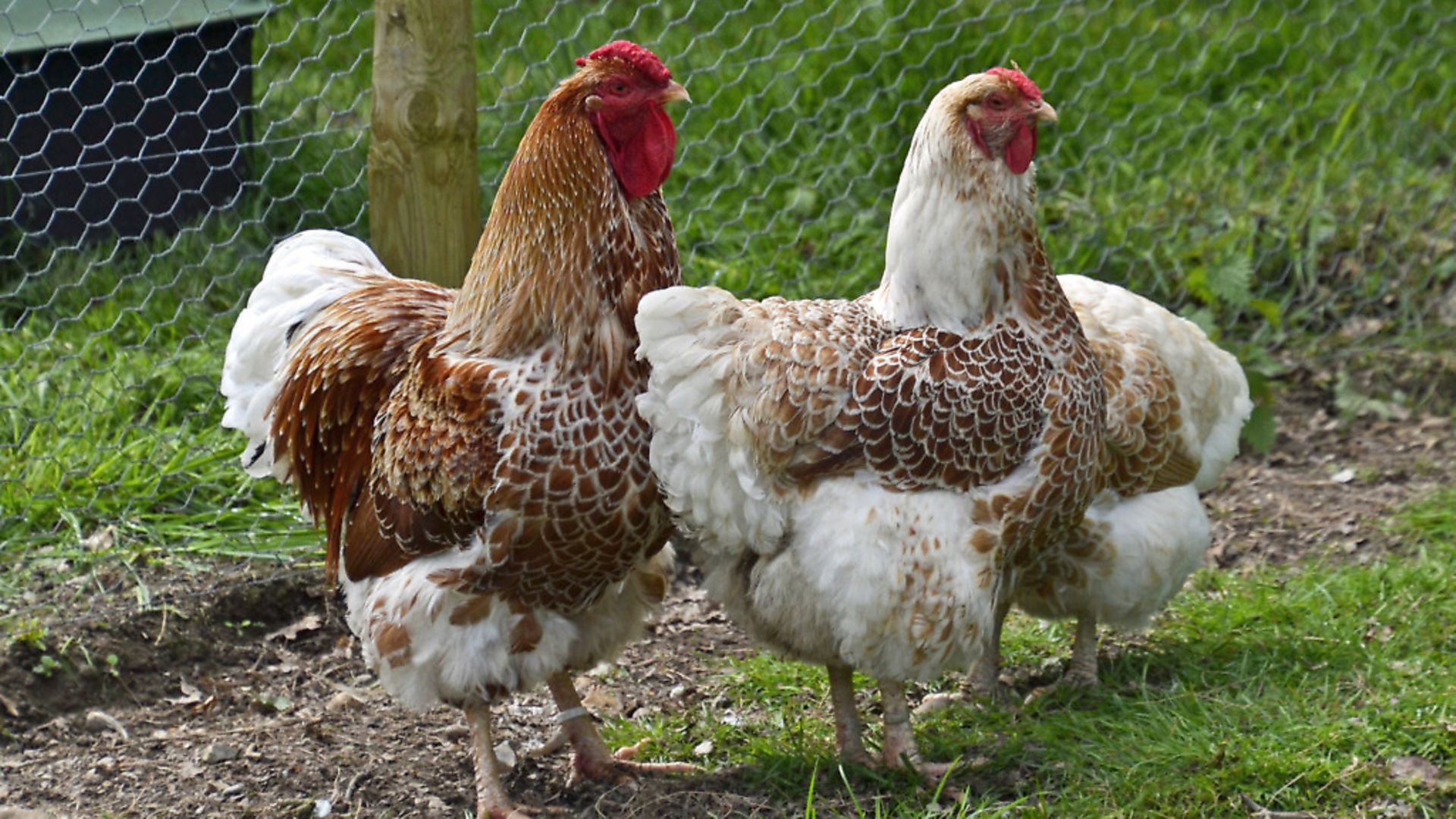 A chicken hotel? What a novel concept.

I had arranged to visit Marlow’s only chicken hotel after hearing about its chicken boarding service. On arrival, Rachel Misra, the ebullient owner of Marlow Poultry, greets me wearing pink combat trousers and a big smile.

She points me towards the chicken boarding pen and I run the car down there to park. That is when I see a dozen colourful chicken houses spaced out inside a grassy pen. The hens are clucking. A cockerel is crowing. It’s charming.

Rachel has been running her poultry business for seven years, looking after other people’s chickens while they are away. She also sells chickens, coops and free range eggs. 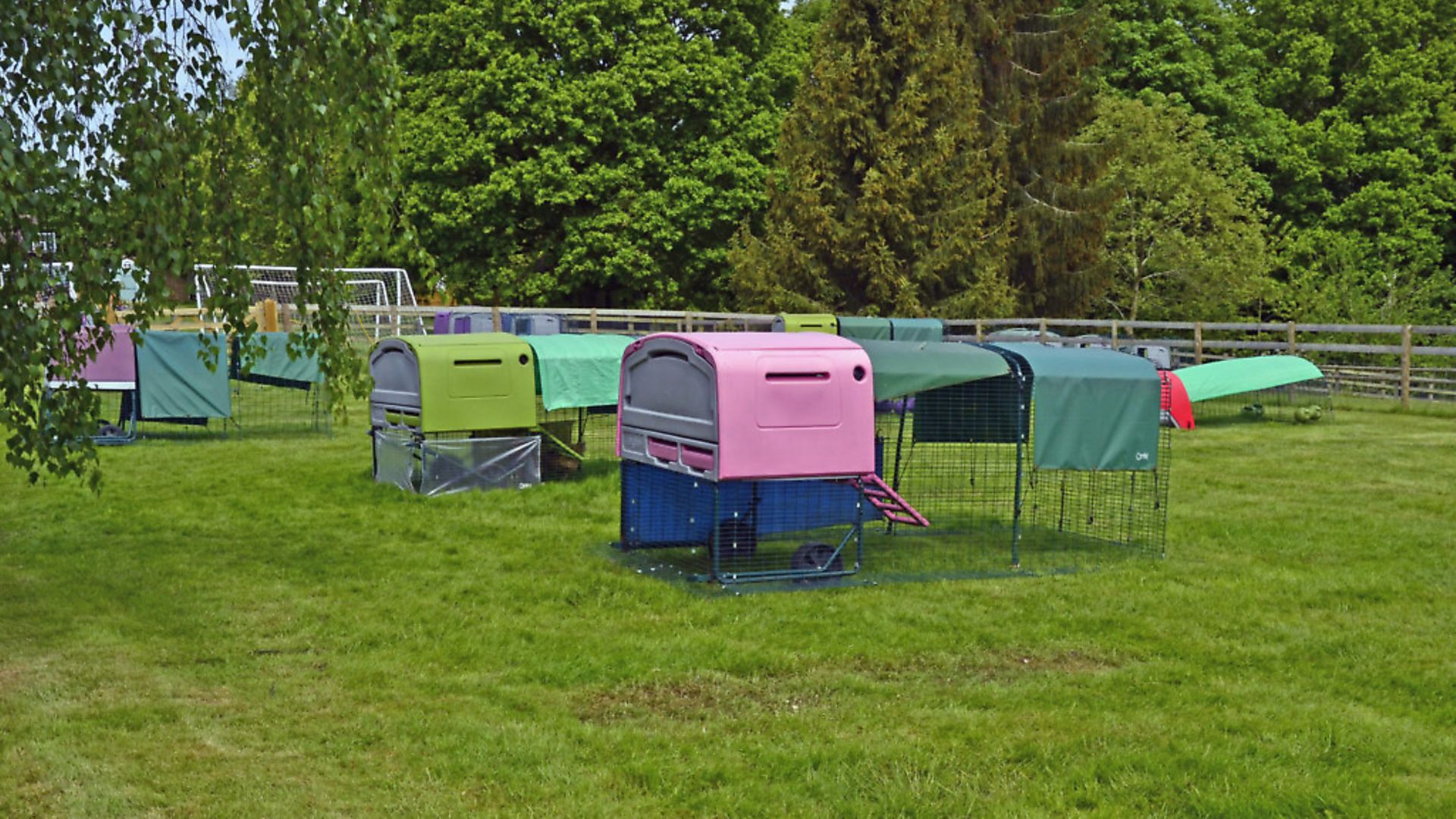 I was told about Rachel’s chicken hotel venture by an acquaintance who brings their chickens here for their holidays.

“It’s chicken boarding really,” says Rachel. “We don’t offer a luxury hotel service, but we do take good care of people’s chickens while they’re away. It’s the same principle as a cattery or kennel. There are so many people keeping chickens these days, so there’s plenty of demand. People bring their chickens to stay from all over the county, with increasing numbers from London — we’re not that far to drive from the capital. The modern plastic coops make chicken keeping more appealing to city dwellers because they’re easy to clean and move. The houses are funky and can be pressure-washed, so the chickens get hygienic homes.”

Rachel keeps the chicken boarding enclosure close to the house so that she can keep an eye on things, and with every change of resident the ground is sanitised and the coop is moved onto fresh grass, ready for the new occupants. She also moves the resident chickens every few days.

We dip the soles of our shoes into disinfectant and then Rachel heads towards the coops, where she introduces a cockerel called Debbie. He is a very handsome fellow and quite friendly. 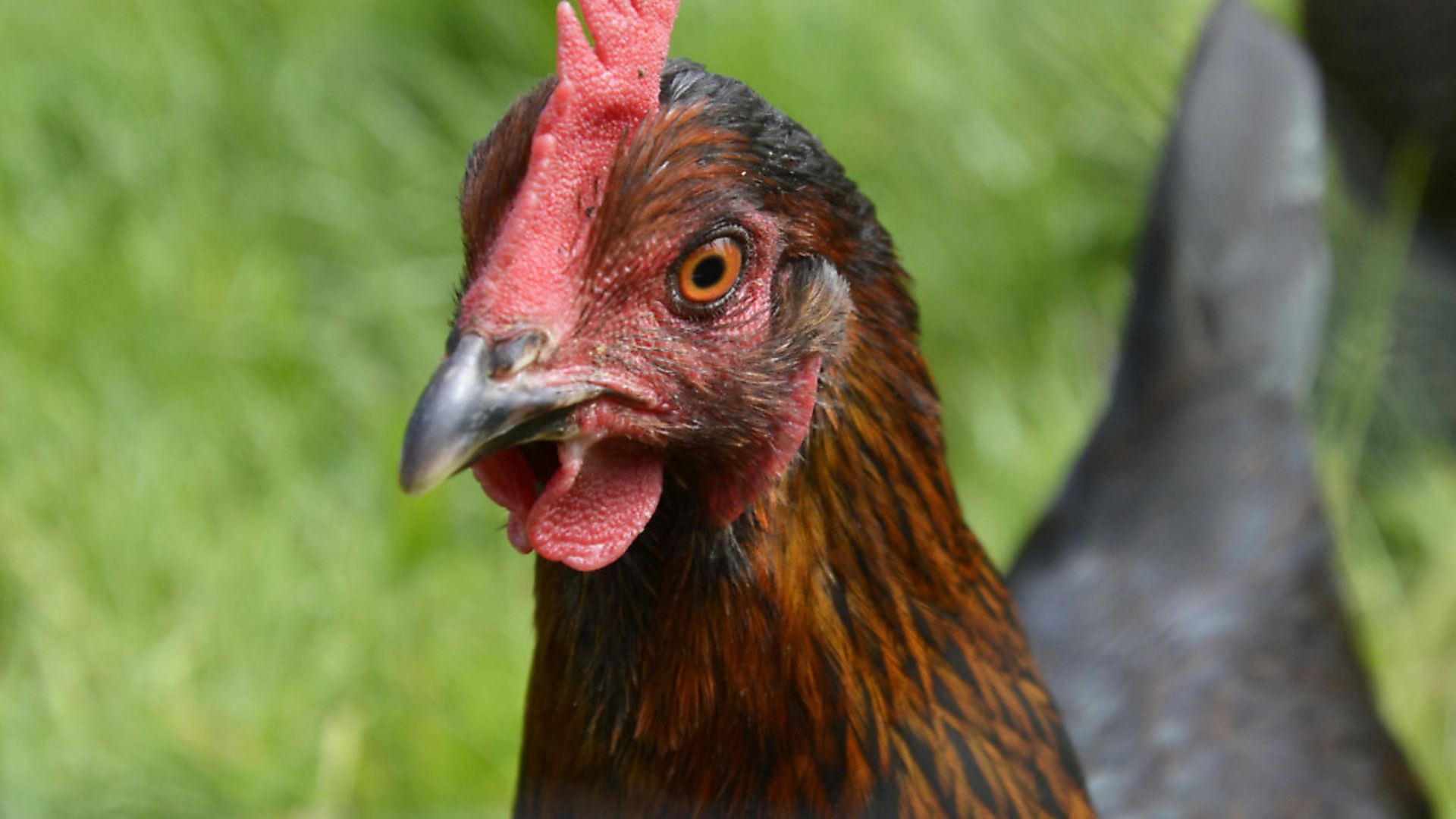 “His owners found him as a chick wandering around behind Debenhams — hence the name,” she smiles. “When it turned out that Debbie was a cockerel, the neighbours started complaining about the early morning wake-up calls, which can be as early as 4am in the summer.

“They got the Environmental Health people round, so Debbie’s owners bought him a collar, which stops him from extending his neck so much and reduces the volume of his crow. They have also sound-proofed his hutch and given it a lower roof, which helps to keep noise to a minimum. Environmental Health were satisfied, but it’s cost the owners a fortune in modified housing and accessories. They adore Debbie, so nothing is too much trouble for him and they are determined to hang on to him,” adds Rachel as Debbie struts towards the toy that his owners have left to keep him occupied on his holiday. “But I think he’s more interested in the ladies in the next pen.” 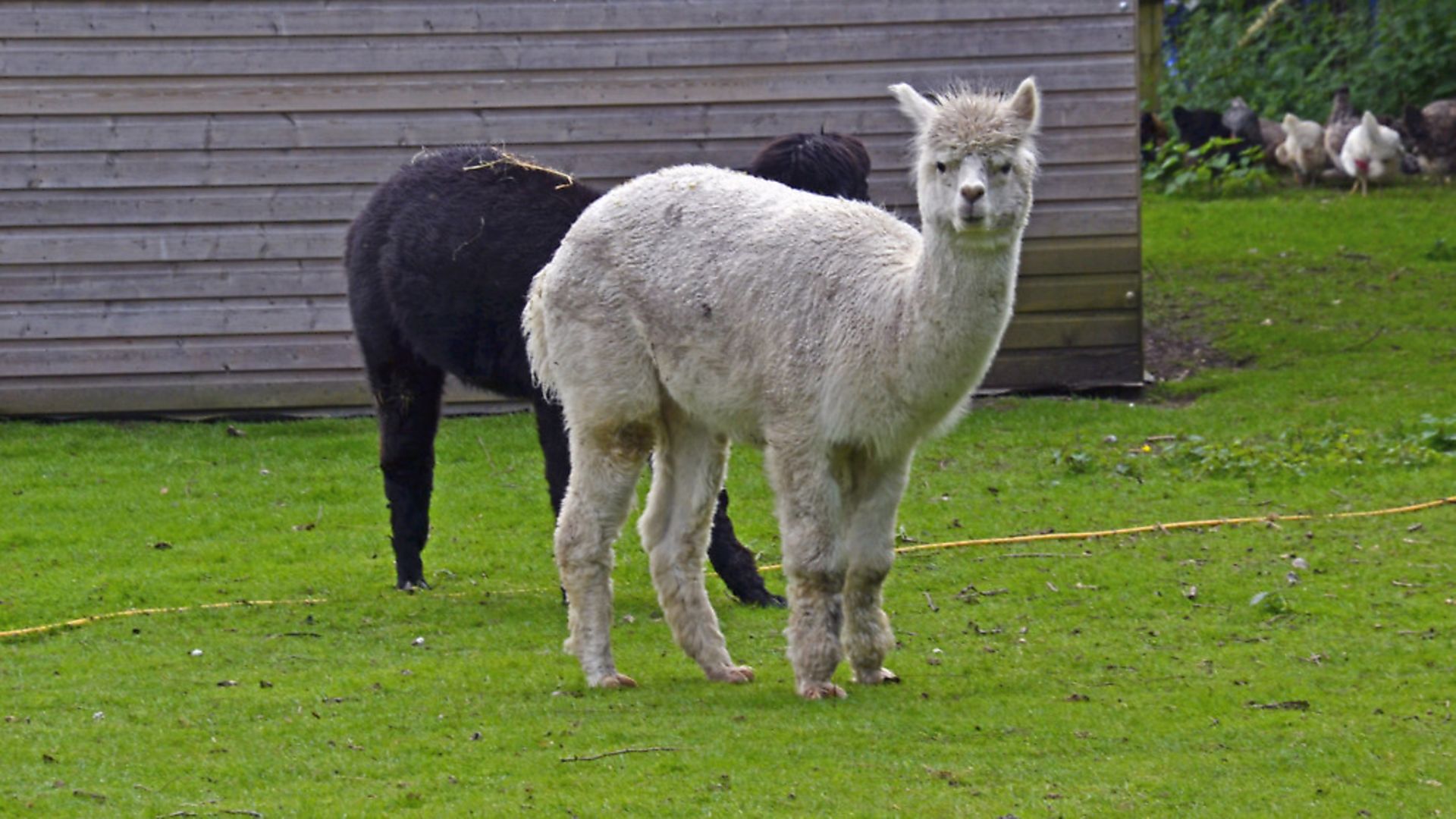 Rachel offers her chicken boarding service all year round. People even drop their hens off on Christmas Eve, New Year’s Eve and New Year’s Day.

“I don’t accept drop offs or pick ups on Christmas Day, but we will look after the chickens over the festive season if people go away for Christmas,” she says.

Rachel is clearly in her element in this corner of Buckinghamshire, thriving in the calm environment with its pure green surroundings. “It gets us away from the hustle and bustle of everyday life,” she says. Her dad, David, spent his life as a farmer, so the lifestyle suits him, and Rachel enjoys interacting with the chickens. She relates how some children arrive in cars with chickens on their laps, while also divulging some of the funny names they are given, such as Tikka and Masala.

“Sometimes we get a husband tasked with dropping off the chickens, but he doesn’t seem to know their names,” she giggles. 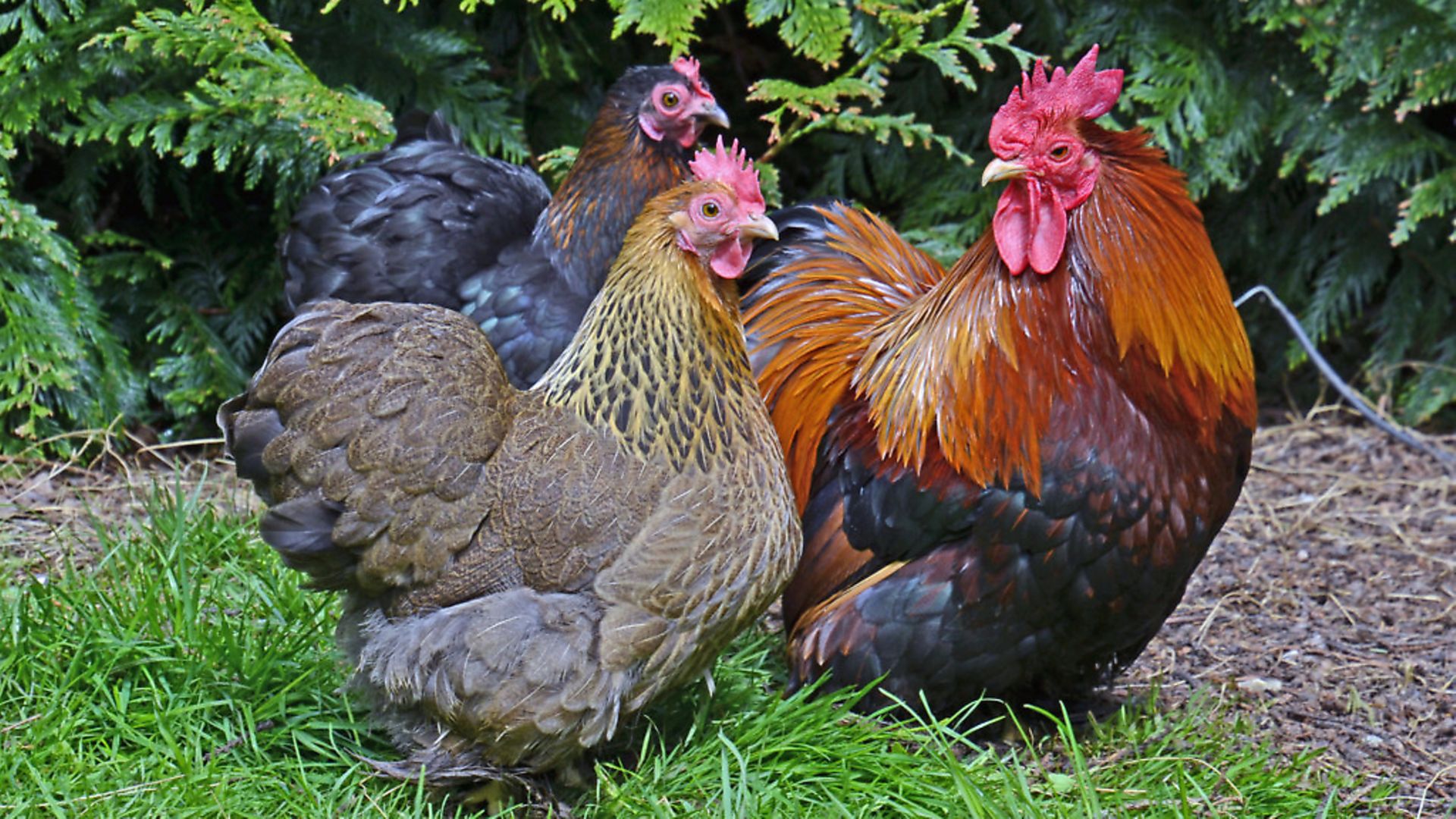 Rachel asks people to pick up their hens by 11am and to drop off new arrivals after 1pm.

“I need that time to make sure the coop is cleaned and disinfected for the next occupant,” she explains. “If the owners don’t pick up their chickens on time then sometimes I’ll pop them into dog crates for a few hours. It’s important to get the accommodation ready for the next occupants.”

Everyone also gets to keep their own chicken’s eggs when they come to collect them. 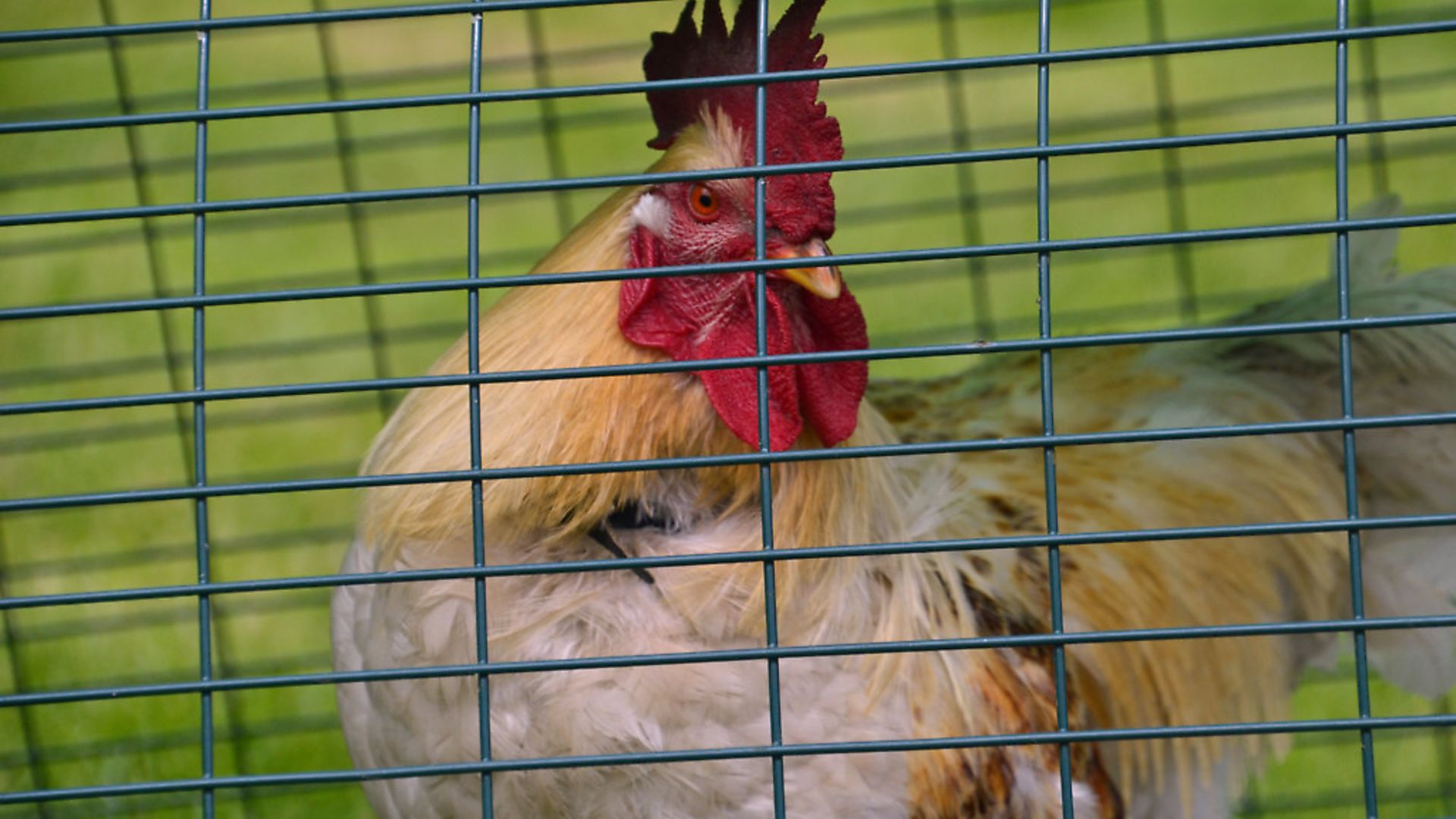 Rachel is particularly fastidious when it comes to ensuring that infections are not brought into the pens.

“A lady once bought me a hen with a discharge coming out of its mouth. I couldn’t take her in, but, as it turned out, the poor hen died there and then,” she says. “We don’t like respiratory problems, but we will assess each hen individually. Some hens are just old and on medications for age-related ailments. As long as they’re not contagious, we are happy to take them in and give them their medications every day.”

Rachel occasionally gets a hen that becomes egg bound.

“You have to massage the area with oil, so it releases the egg, then she’s usually fine.”

The chickens are fed layers pellets, but if their owners have other preferences that can be accommodated. People bring along all sorts of foods and treats. Some even arrive with bags full of their hen’s favourite fruits from Waitrose.

“We find that if you give them lots of titbits or scraps, they don’t lay as well, but it’s completely up to the owner,” says Rachel. “Some people aren’t bothered about the number of eggs produced by their hens. We just try to do whatever people ask.”

Rachel is not averse to doing some basic health checks while the chickens are in her care and she will give treatment for mites if necessary. She encourages people to check for crawling things on the underside of their hens before they arrive and also to worm their hens every three to four months.

The next visit is to the breeding hens and hybrids for sale. They are running around in large open-topped pens and seem very confident.

“I’ve got two cockerels in here,” says Rachel pointing to her breeding Silver Laced Wyandottes. “They hatched together so they’re OK to live together. Once you separate cockerels you can’t put them back together again because they’ll fight. We also have silver-laced and buff-laced chicks, as well as a couple of Pekin Bantams. They stay under the heat lamp until they’re six weeks old.

She leads the way into the shed, where the latter are being kept. The tiny timid chicks suddenly run en masse to the other side of their enclosure.

“I’ve got a collection of 16 to 19-week-old hybrids for sale, too,” says Rachel, who explains that they typically lay eggs on two out of every three days, compared to commercial Gold Stars who lay every day. The different varieties particularly appeal to people with children who like the different colours of the chickens and their eggs.

“Choosing the colour of their eggs gets children interested in eating them,” she adds.

A Gold Star chicken is running up the path towards us, keen to be in on the action. She follows us around in an endearing way.

“The Cream Legbars can be lively and flighty,” continues Rachel while walking past their pen. Given that introduction, however, they are paradoxically looking rather reserved. Finally we reach the field where Rachel’s alpacas roam. They are here because they frighten away foxes who might otherwise prey on the birds. More hens roam nearby too.

“We have a number of older hens in the field,” says Rachel. “They don’t lay — they are just pensioners living out their days in peace.”

There are surely challenges to running a chicken hotel — being on call 365 days a year being one such issue. According to Rachel, though, running her chicken boarding service is fairly straightforward. She occasionally has to wait in for people to deliver or collect their chickens, but she has help in the business. Her dad, David, who lives with Rachel and her four children, takes on a lot of the practical work and steps in when his daughter is busy with the numerous school runs and supermarket shops. Rachel’s son, Rohan, is a whizz on the business’s Facebook, Twitter and Instagram accounts. This is definitely a family affair, even though husband Kesh isn’t here today. He works as a doctor for the NHS.

One unavoidable problem is predators. Rachel says: “We sometimes get foxes in the field, but the alpacas are curious creatures. If they see anything like a fox, they’ll go to investigate and, as foxes are nervous of alpacas, they run away. Alpacas are a brilliant deterrent. Their field goes all the way around the chicken enclosures, so the alpacas protect all the hens from predation.”

The chicken houses and runs have been made fox-proof with skirts constructed along the bottom to stop foxes from digging underneath. All the chickens are shut in at night and the family keeps a close eye from the house.

In recent years they have had to introduce stricter biosecurity measures because of bird flu. “Before entering the areas where the chickens are kept, everyone must dip their boots in a tub containing disinfectant,” explains Rachel. “I also restrict visitors from entering the poultry pens at such times. There have also been periods when the birds have had to be kept indoors to prevent contact with wild birds who may be carrying the disease.”

Rachel came up with the idea of chicken boarding after seeing a similar service in Cornwall.

“A friend told me someone had opened a chicken hotel there. We thought it was a great idea and decided to do something similar ourselves.”

When Rachel, Kesh and the children go away, they leave David in charge. “He’s really brilliant at the feeding and cleaning and as he doesn’t have many holidays he’s generally around when we need him.”

I leave Marlow Poultry feeling uplifted. What a wonderful, innovative way to make a living in the heart

of the beautiful Buckinghamshire countryside.