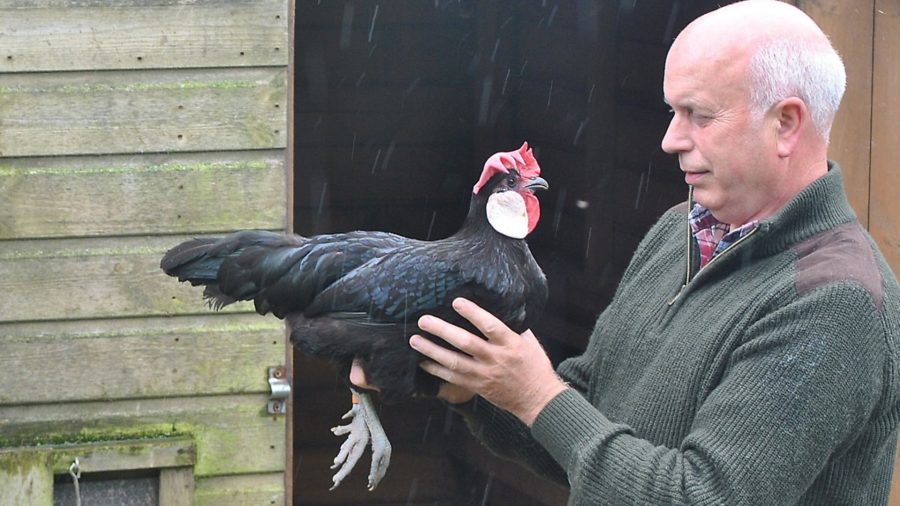 Andy Cawthray looks at the pure breeds developed for egg laying. his month: The Minorca

The Minorca is a striking looking Mediterranean breed of chicken that is well known for its huge prominent white ear lobes surpassed only perhaps by those of the white-faced black Spanish fowl. It is a typical-looking south European laying breed and has a strong dedicated following on the exhibition circuit

The Minorca is a development of the common black fowl of Spain known as the Castillian. Its name is believed to have been derived from the port, Ciutadella de Menorca on the western end of the Balearic Island of Minorca. It is from there where many of the birds were exported to other European countries such as Britain and Germany.

The Minorca is one of the heaviest light breeds around and is a popular breed on the show bench. Predominantly seen with black plumage, the current standards also cover blue and white plumage varieties. The main characteristics of exaggerated lobes, combs and wattles remain significant in the remarkable appearance of the bird.

The Minorca hen weighs 6lbs (2.7kg) and has an upright carriage with a graceful appearance. This is accentuated by the lop of the single comb which drops down over one side of the face, but not as to obscure the bird’s vision.

The Minorca cock weighs 7lb (3.2kg) and shares the same the alert and graceful appearance as exhibited by the hen. However, the single comb stands upright and is evenly serrated with five serrations. Rose combs are acceptable in the large fowl version of the breed but they are less frequently seen.

The Minorca is famous and highly prized for its ability to produce extra-large white eggs. The hens seldom go broody so eggs need to be hatched by another breed or in an incubator.

As with most light breeds the Minorca is quite capable of short flight and can easily fly rather high. They can be a little skittish but a relaxed and patient keeper will be rewarded with friendly birds.

They are a hardy breed and can cope with most climates, but care must be taken with the headgear of the Minorca during the winter months. The exposed skin of the large lobes, wattles and combs should be treated with petroleum jelly to protect them from frostbite plus drinkers need to be adapted to avoid the wattles, and the comb of the hen, from getting wet. As a light breed that is capable of flight, a roof will be required if the birds are to be kept contained within a run. If the birds are to be free ranged then suitable boundary fencing may be needed.

The Minorca is a specialist breed and has a strong, but very limited following. As a consequence, despite their excellent laying capability, it can be difficult to source good quality stock. A show standard bird can cost anywhere from £50-£100. However, the standards of perfection are such that anyone who breeds for show will potentially have a large number of birds that don’t meet the mark. As a result you may well be able to pick some discarded or below par pullets for £10-20.