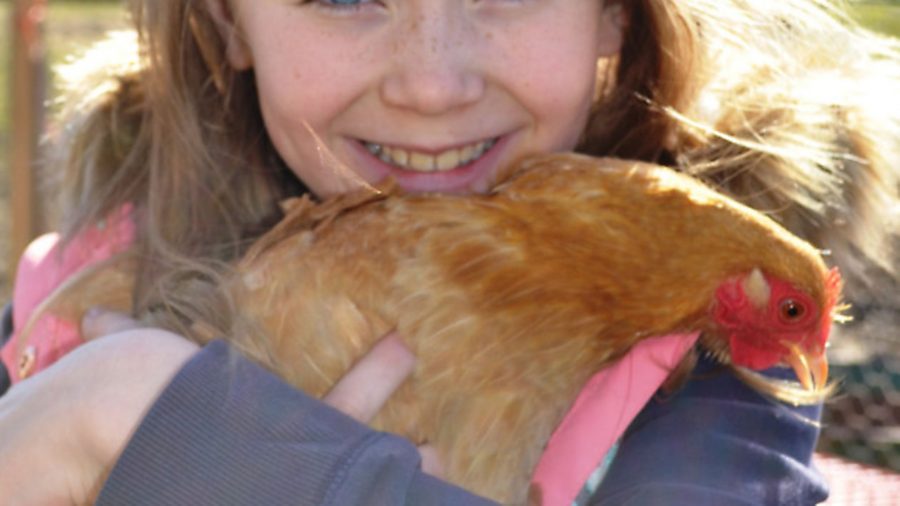 What are the most popular chicken breeds with buyers? Charlotte Popescu visited three poultry breeders to find out

It is fascinating to talk to poultry breeders and gain an insight into the market. I visited three breeders in the south of England to find out what are their big sellers: 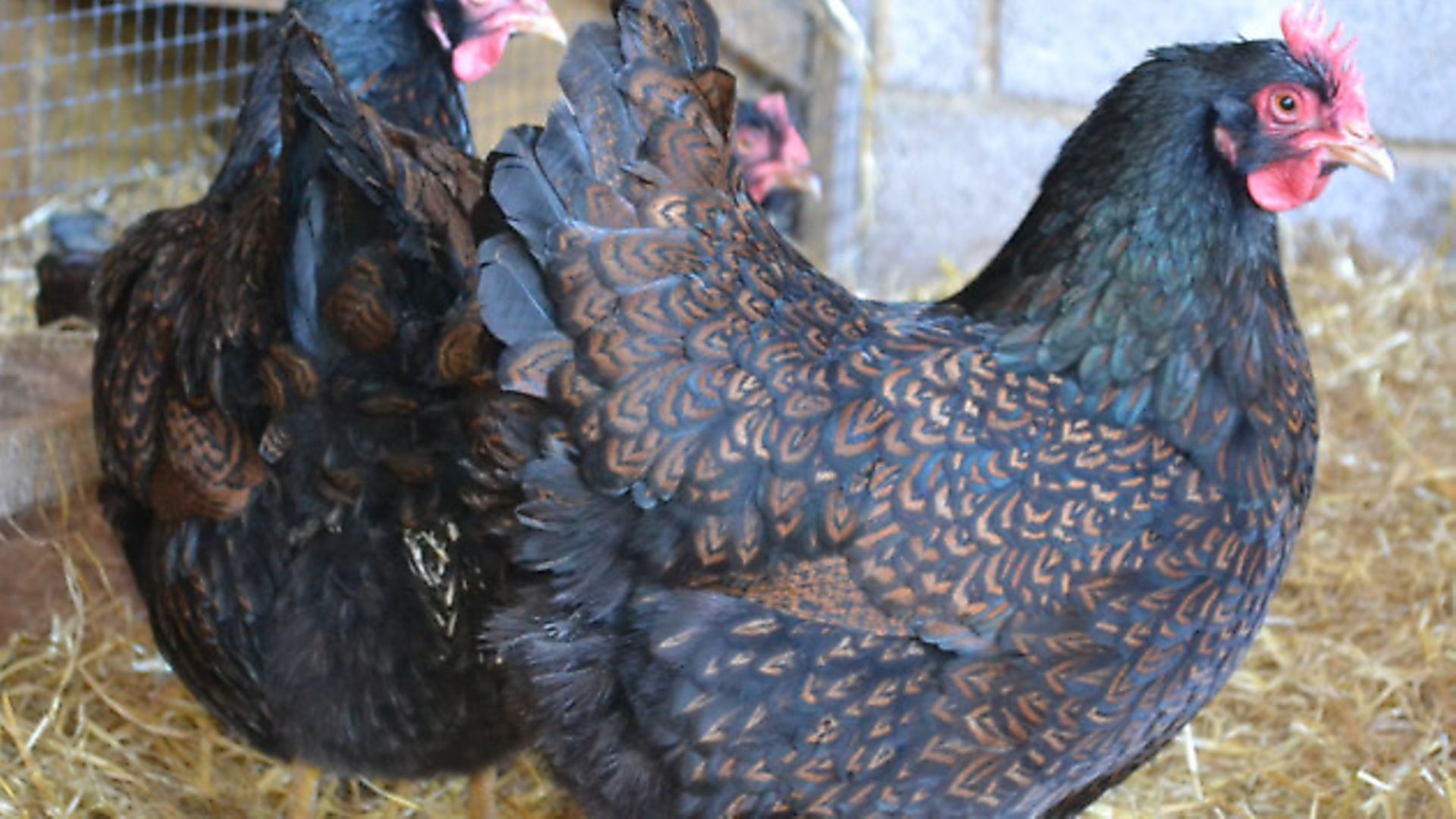 Fleur Swanton runs Wylye Valley Chickens in Wiltshire and sticks to pure breeds with a really good selection of bantams. She does not sell hybrids. She says: “The popularity of certain breeds can vary year on year. Currently my most popular are the Buff Sussex, the Araucana, the Buff Orpington and the Barnevelder. “One year,” she adds, “the Norfolk Grey was very popular but that was because there was an article written about them!”

“People come for the bantams,” Fleur says, “then go off them because they go broody all the time, so they come back for the large fowl which may also go broody. Eventually they may decide hybrids are going to be the best bet.”

Fleur has all sorts of breeds, kept on straw in breeding pens in a large barn for the first half of the year. They will go out to grass in June and new breeding stock will come back into the barn next January. Unusual breeds include the Derbyshire Redcap, but it is not a good seller as people don’t particularly like the strange comb. I am most struck by the Fayoumi, an Egyptian rare breed. Fleur has silver and gold but it is the silver that I will be trying this year; I’ll go back for some hatching eggs as soon as I have some reliable broodies waiting for eggs. The Sicilian Buttercup is another rare breed. “People are fascinated by the very original cup comb,” Fleur tells me. The Kraienkoppe is also rare and these are sometimes on sale at Salisbury market. “They are good layers,” Fleur informs me, and quite popular.

While I am with Fleur, two families come over to buy hens. First Kate Barnacle and her dad turn up. They take a while to choose from a pen of various breeds but eventually go for two Pekins and four large fowl, two Light Sussex and two Gold Brahmas. 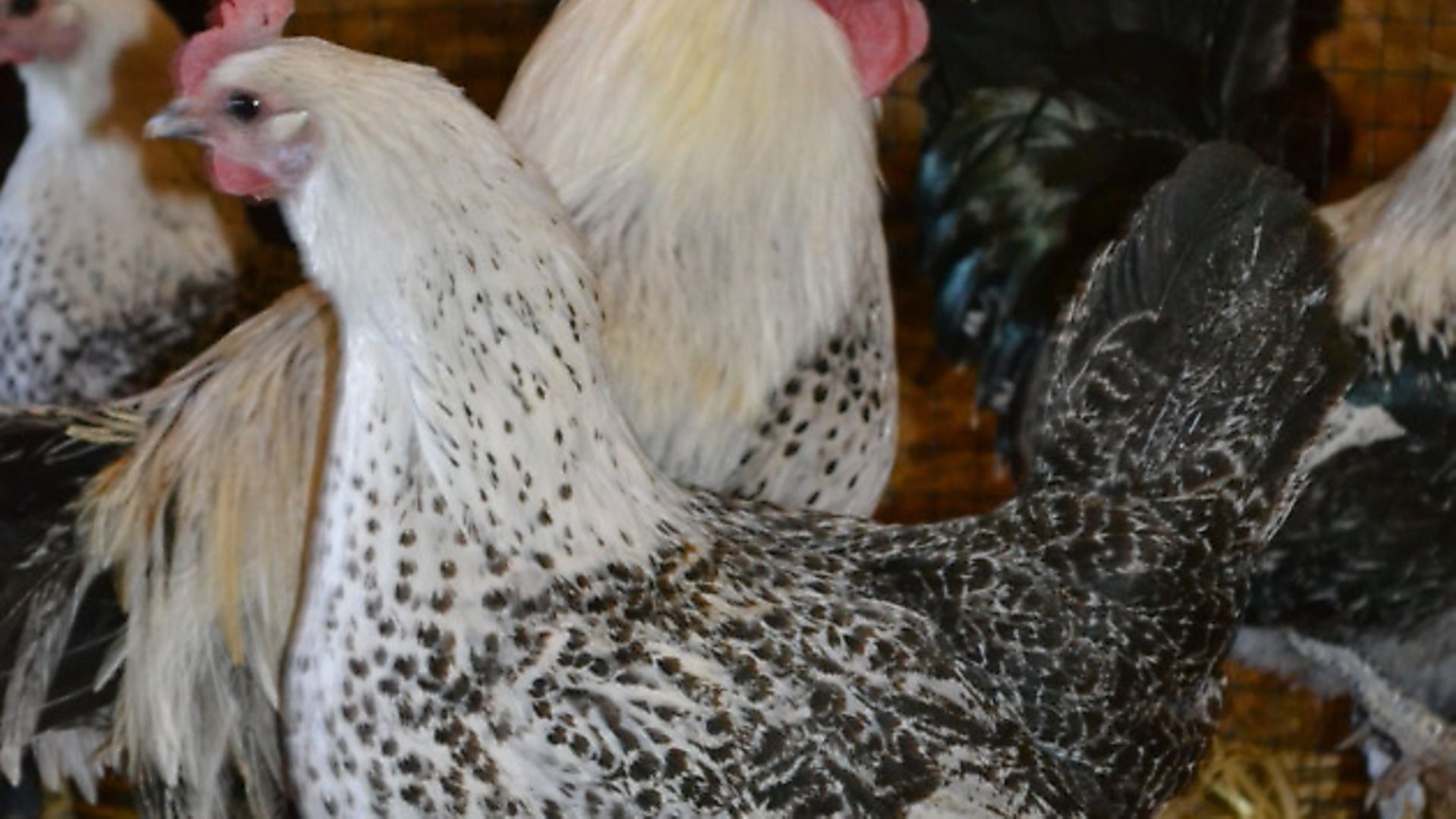 Then the Oldfields appear; Dad, with three daughters, from Winchester, have come to pick up a cockerel. Fleur has all her spare cockerels turned out together in two large grassy pens. There are so many it’s difficult to choose. In the end they go for Fleur’s spare Welsummer cockerel possibly because he looks the most traditional and is neither too big nor too small. They also choose a barred Plymouth Rock hen as they had lost theirs a few days before and they want a Light Sussex.

Fleur adds: “The looks and character are important. Families are buying hens as pets so appearance will often outweigh the hen’s egg laying abilities. I usually suggest families have fewer hens than they are asking for as I want them to be enjoyed and space in the garden is important.”

Oxford Poultry specialise in hybrids. They buy hybrids in at day old chicks, rear them on site and sell them from 16 weeks. They are priced very reasonably at £12.50 each. Owner Sarah Smith says: “The Blues are the most popular. They are such a lovely colour and lay well. Second choice would be the brown hens (Isa Warrens) as customers like to include one or two in the mix as they are the best layers. People usually go for a Nera (also known as Rhode Rock and similar to the Black Rock) as well and the fourth most popular is the White Star. A white egg layer is often wanted for the mix of differently coloured eggshells.

“I let everyone know that, even though they may look the same, hens have their own individual characteristics and the hybrids can be particularly friendly. They are bred to be docile. The other huge advantage is that they are unlikely to go broody as this has been bred out of them. They have also been vaccinated against all the major poultry diseases which is a huge advantage.” I am amazed at the beautiful cockerels strutting around with the girls. Sarah tells me that about 1% in the batches of chicks that she receives turn out to be cockerels. These are predominantly Blue Ranger cockerels. I think this is because the males are more difficult to sex when hatched.

Lastly, I went to see Pam Pickard at Blackwater Traditional Rare Breeds in Hampshire. Pam has a wide selection of hens for sale because she keeps rare breeds and sells hybrids, acting as an agent and buying in 100 hens at 16 weeks to sell on. Pam says: “Bantams are really popular at the moment. Customers are keen on Pekins and Sablepoots (Dutch booted bantams) as they don’t fly and are easy to keep, needing less space than large fowl.”

Bantam versions of the large fowl that are popular and can be hard to source are Rhode Island Reds, Light Sussexes, Partridge Welsummers and Cuckoo Maranses. Other pure breeds that she can’t breed fast enough are the Buff Orpingtons, both large fowl and bantam versions.

Pam enthuses: “When the hybrids arrive the first to be snapped up are the Amber Stars as they are both attractive and docile. Second to go are the Rhode Rocks but there are always at least seven different colours available including Isa Browns, Calder Rangers, Rhode Rocks, Speckledys, Blue Rangers, Sussex Rangers, Ambers and the Magpie (a barred Plymouth Rock/White Rhode cross).”

Pam has boarding facilities for hens and is an Omlet UK reseller. Visiting Blackwater is a treat because as well as all the chickens there are lots of other animals to see including horses, alpacas, goats, turkeys, ducks and other waterfowl.