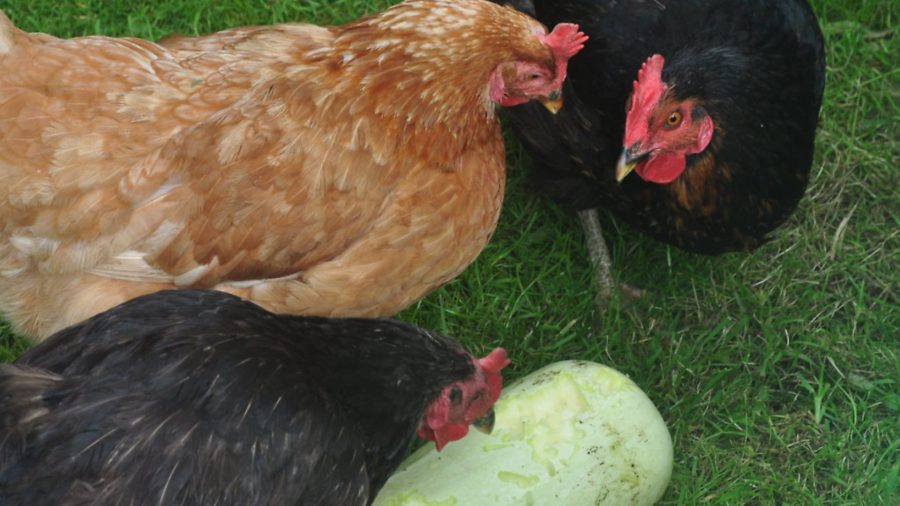 Recipe for success: Kim Stoddart looks at some of the best feed choices for laying hens

If you have ever spent time watching your hens, you will see that in addition to eating the layers pellets or grain you provide them with each day, they enjoy actively foraging for food. Whether it is pecking at grass or scratching the ground looking for bugs and goodness knows what else, they also love any spare produce from the veg patch that you can pass their way.

A favourite of mine would be the courgette or three that got (grew) away, transforming in marrow-esque proportions on the patch as I struggled to keep up with picking them. Chickens will happily munch away on these – using their beaks on the tougher exterior to get to the soft summer squash beneath. It is arguably entertainment as much as food. Likewise, any spare (bolted) salad leaves or spoiled fruit also go down extremely well, as do cabbages, herbs, tomatoes and much more besides.

Chickens will also often jump up in the air to catch flies and can take on (namely eat) creatures you might not have thought possible – small rodents for one. A friend told me that she saw one of her chickens eat a bird the other day, and it doesn’t surprise me. I adore keeping poultry, but I am under no illusion that if they were bigger than me they probably would bite the hand that feeds them (literally), given half the chance.

Instead, they also get to eat any slugs or cabbage white caterpillars that I have picked off the veg patch, which I tip into their enclosure before walking away to let them get on with it. I’m too squeamish to watch, but it is an eat-and-be-eaten world, after all. And at least it is making some practical use of these nuisance-making creatures on the veg patch. I should mention, however, that any black slugs go on the compost pile instead, as they are less of a threat than the others and they actually undertake a valuable role in helping to transform plant waste into gardener’s black gold.

Of course, alongside this bounty of natural smallholding fare, your feathered friends will need bought-in edibles as well. Here is a look at a few of the varieties that are widely available to buy…

This well known feed company sells pellets which offer a general all-purpose, balanced diet for chickens from point of lay onwards. You don’t need to supply any additional limestone or oyster shell grit with this food as it has been specially designed to ensure shell quality, good yolk colour and optimum egg production.

It is available to buy through most smallholding suppliers nationwide.

This family-owned company, based in Norfolk, says it produces feeds designed for animals being raised in a more natural setting. All of its products are vegan approved by the Vegetarian Society and they are made using the highest quality oils, without the use of genetically-modified ingredients. Allen & Page sells a wide range of feed for poultry, including free range and organic layers pellets.

Its organic product, which is Soil Association approved, is made from 100% organically grown agricultural ingredients. It contains vitamins, minerals and omega 3 oils for the health and vitality of your hens and their eggs.

Marriages Layers Pellets As well as offering standard everyday feed for your hens, this company also has a medicated feed which comes with a wormer (Flubenvet) built in. It is therefore an easy option for ridding your hens of any parasitic infestation and, according to the manufacturer, is effective against several types of worm issues. There is no withdrawal period for the production of eggs, just a recommended seven days before slaughter if that is what you are planning.

Mixed corn – for an afternoon feed

Allen and Page The Smallholder Range

The company also provides a non-GM maize, which is a nutritious treat for birds later in the day, following on from their morning feed.

This product apparently helps to provide warmth during the night and contains, among other healthy ingredients, extra carrot, pea and sunflower seeds. It is suitable for all poultry and waterfowl and has been designed to encourage healthy digestion and natural foraging, the company says.