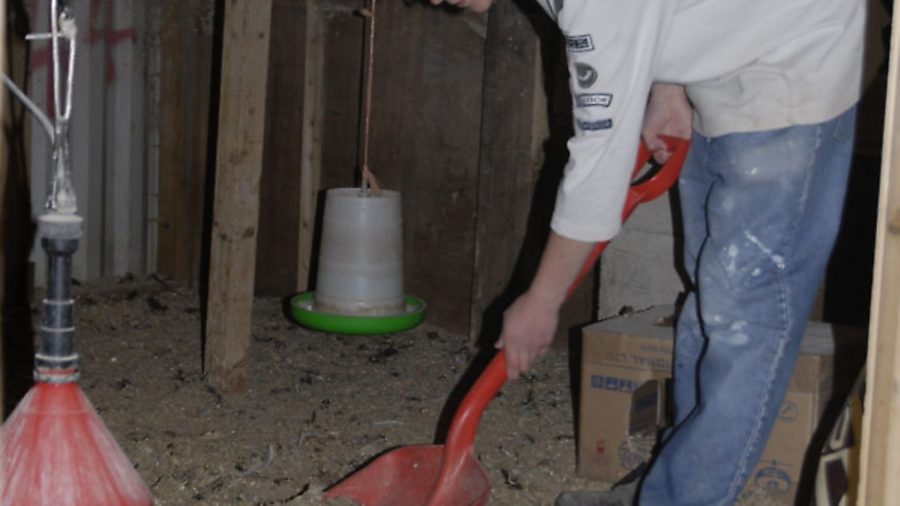 How do you keep your birds comfortable during the winter without it costing a fortune? Terry Beebe offers advice Many henkeepers worry about their chickens getting cold in winter. Ironically, the birds are actually more at risk in hot weather, but there are some things you can do to help keep them warm in deepest, darkest winter.

One thing to remember is that the birds themselves will generate some heat. A single commercial hen can produce around 10 watts of heat, so 10 hens will produce as much heat as running a 100w light bulb, and this will help keep away the chill.

Sunlight is obviously the best heat source, so allowing natural heat through the windows and doors is ideal, but this obviously won’t be the case when the temperature really drops.

If the housing is right down on the ground, this will make it colder. Raising the house off the ground will help.

One ideal way of keeping the birds a bit warmer is to use a really thick layer of bedding, ideally shavings. Deep litter is basically forming a sort of ‘compost pile’ of chicken droppings and bedding on the floor of the coop. This acts in a similar way to a compost pile. You begin by laying a layer shavings or similar bedding, then, as the birds deposit droppings on top, you add another layer of shaving, so building into a nice composting floor. The chickens will aerate the floor with their usual scratching; scatter a small amount of corn to encourage them. This will keep the floor fresh while helping with warmth; this compost also contains microbes that will benefit your hens.

Scatter hay or straw in the run and at the entrance to the coop to reduce the amount of dirt and wet from entering the coop. Always allow access to fresh drinking water.

If you have a very large coop with just a few birds, it can be partitioned inside to make the area smaller and easier to keep warm. You have to be careful not to overdo it though – birds that are to confined can be affected by respiratory problems if they are overcrowded. Never totally close air vents as this can lead to respiratory infections, but make sure there are no drafts. Ideally create a windbreak and only slightly limit the ventilation.

If using normal bedding methods, then make sure the coop is kept as clean and dry as possible as the birds themselves put out a lot of moisture, both through poo and breathing, and this dampness can create frostbite (see next page). By keeping the coop both dry and clean, you will help to prevent the problem. Using wider roosting perches will help as the birds settle down on the perch and the breast feathers will cover the feet helping to keep them warmer. But also remember that the birds will huddle together to keep warm.

Roosting perches are best set at around 2ft from the ground if possible.

Using electrical heating devices is a favourite with many people. Heat lamps can be used, but they can be costly to run and sometimes are too hot to be safe. There can also be a risk of fire. An electric light bulb is ideal; they give off a certain amount of heat that will help to keep the chill out of the housing, and they are also relatively cheap to run. Feeding corn before bedtime will help increase the birds’ body heat as they digest the corn during the night.

• If using standard bedding, clean the droppings from inside the coop daily.

• Scatter hay or straw in the run and at the entrance to the coop to reduce the amount of dirt and wet from that gets inside.

• Cut down the ventilation, but only slightly to reduce drafts and damp.

• Treat combs and wattles against frostbite.

• Don’t have the water inside the coop – it causes damp.

• Avoid drafts in the coop.

• Don’t use a heater – there is a risk of fire and it can be costly. Light bulbs will help.

• Always make sure there is enough space for all the birds to roost on the perches.

• Don’t close off all sources of ventilation.

When the frost bites…

With the onset of winter, your flock is prone to frostbite. Not only is frostbite painful, it can cause disfigurement, loss of mobility, a fall in egg production and infertile roosters (fertility will return with warmer temperatures). Knowing the causes of frostbite will minimise the risks and how to treat frostbite should any chicken succumb is essential for any backyard keeper.

Frostbite occurs when the fluid in tissues freezes, causing a loss of blood supply which deprives the cells of oxygen. The damaged cells die and will eventually appear as blackened areas on the tips of combs, wattles or toes. The dead tissue will ultimately dry up, harden and fall off.

As temperatures fall, chickens naturally conserve their body heat by restricting blood flow to their combs, wattles and feet — it’s this decrease in warmth and oxygen that puts these extremities at risk of frostbite.

Chickens with large combs and wattles are more susceptible to frostbite than those with smaller combs such as pea combs. Roosters tend to be more at risk than hens, but any large-combed hen, for example, a Leghorn, is vulnerable. Wattles are particularly prone to frostbite due to immersion or drips from drinking water.

Frostbite isn’t just caused by freezing temperatures. In fact, frostbite is more likely to occur overnight in a poorly ventilated coop with damp bedding where moisture from droppings and respiration cannot escape rather than from the cold itself.

If a chicken has frostbite, you’ll see the tissues whiten and become greyish blue in colour, eventually blackening. The tissues will be swollen and will feel cold and / or hard to the touch. You may see blisters filled with clear or milky fluid one to two days after exposure. Chickens with frostbitten feet are likely to limp. You’ll notice a loss of appetite.

A bird with frostbite may need to be moved to a warmer area if the case is severe to prevent further injury. Warm the affected area slowly once the bird is no longer exposed to the cold — thawing and re-freezing of exposed tissues will cause further damage. Never use direct heat such as a hair dryer or heat lamp. Soak frostbitten feet in lukewarm water to slowly bring their temperature back to normal. Soak a clean cloth in lukewarm water and carefully hold against combs or wattles. Never rub or massage the affected area — you could cause further damage. Avoid the temptation to burst any blisters — they are a natural plaster, protecting the underlying tissues. Do not remove any blackened tissue as this is protecting the remaining comb. Keep the bird hydrated and segregated from other birds to prevent pecking. Seek veterinary help if there are signs of infection.

Prevention is better than cure — a few simple steps can help to reduce the incidence of frostbite within your flock. • Ensure that the coop is watertight so that rain and snow cannot leak inside;

• The coop should be properly ventilated. Ideally, you want to get as much air exchange throughout the coop as possible without any draughts. If there is condensation on the coop windows in the morning, there isn’t enough ventilation;

• Provide plenty of flat wide perches so that the birds can cover their feet with their feathers and bodies;

• Provide a covered and protected outdoor run or lean-to structure to avoid confinement to the coop during inclement weather. If temperatures do plummet, never force chickens to go outside.

Whilst frostbite may not be completely preventable amongst our flock, the actions that we take now can help reduce the number of instances of frostbite this winter.

This article is from the November 2014 issue of Your Chickens