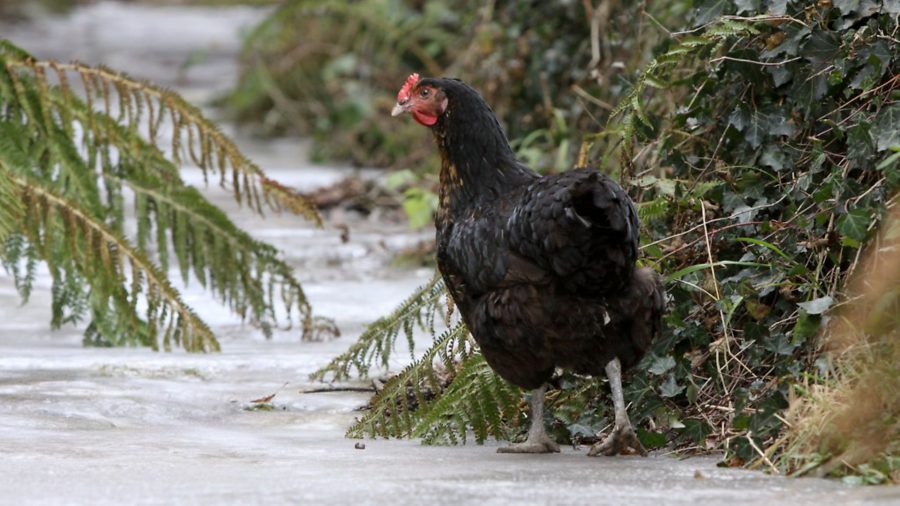 Homoeopathy can have remarkable success as a health treatment for chickens, says Julie Moore 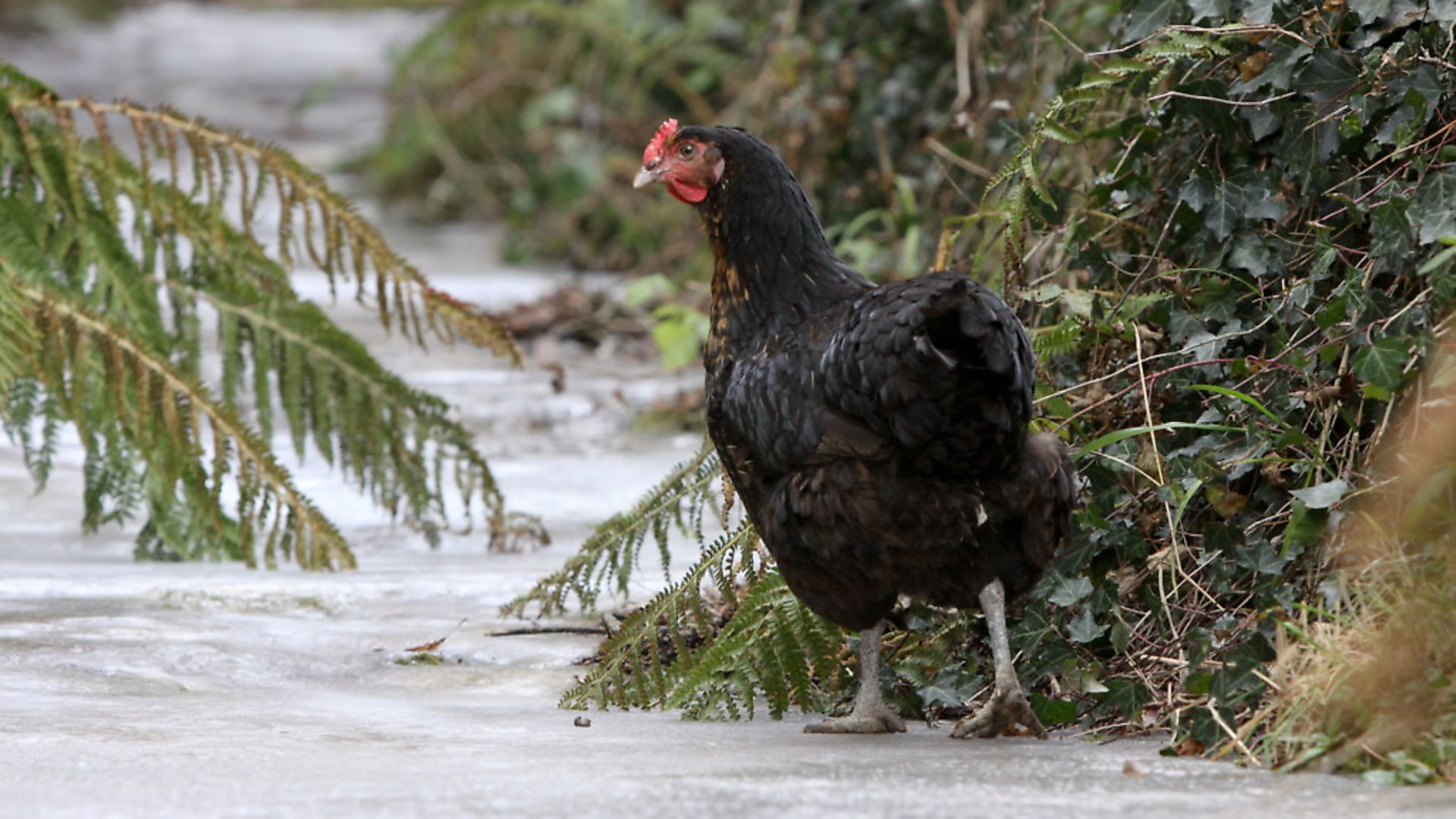 Homoeopathy has been used by humans for more than two centuries and is becoming more and more popular despite the advances in modern medicine. An increasing number of pet owners and farmers are turning to alternative, natural medicines and have found that homoeopathic remedies are effective for all types and sizes of animals, including chickens.

Homoeopathy is a system of medicine that stimulates the body to heal itself. Both humans and chickens have an innate ability to stay well and heal themselves if they fall ill — it’s called the immune system. If we catch a cold, we generally recover in a few days. Most of us can get over emotional stresses such as bereavement, bullying or business problems.

However, in some of us and some of our hens, this ability not to fall ill, or recover if we do, is damaged. There are a number of reasons for this including: mental stress, inappropriate diet and genetics. 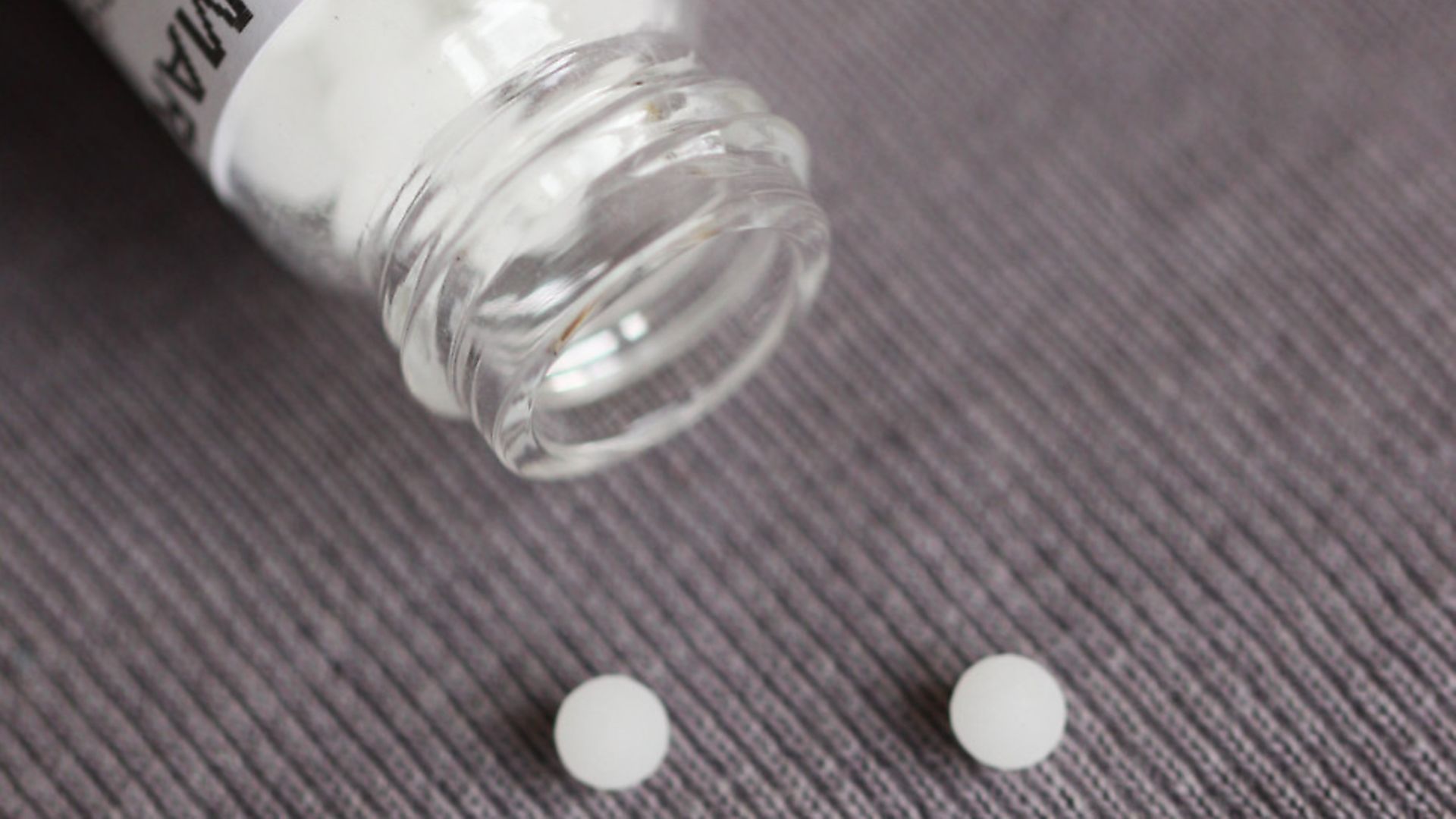 “As a homoeopath, you realise there’s always a reason for a disease. Our body doesn’t decide ‘I’ll get ill today.’ A large percentage of diseases, including cancer and auto-immune diseases, are caused by mental stresses such as grief or bullying. Homoeopathy addresses that mental imbalance or disharmony, which is actually the cause of the physical disease that follows. In conventional medicine, you treat the physical disease but seldom address the origin of the disease. The exciting thing about homoeopathy is getting to the root cause and understanding your whole patient rather than just looking at a disease in isolation,” explains Geoff Johnson, a homoeopathic vet practising in Somerset.

Geoff qualified as a vet from Cambridge 30 years ago. He was the Principal for 11 years of a mixed veterinary practice on the edge of Exmoor. During this time, he realised that he seldom cured anything and merely contained diseases all the time using continual drugging. It wasn’t until he learnt more about the philosophy of disease that he understood that a sick animal would still be sick if the drugs were stopped. He witnessed the power of homoeopathy, and having completed the demanding VetMFHom examinations, he incorporated it into his work. He sold that practice 12 years ago and opened a homoeopathy only surgery in Wiveliscombe where he primarily sees complex chronic disease cases.

Geoff recalls, “In my six years of study at Cambridge, I never had a single lecture on the fact that animals have emotions and can suffer from stresses in the same way that humans do. This is astonishing because they absolutely can and that’s what causes disease. It’s only recently in conventional medicine and particularly veterinary conventional medicine that people are beginning to realise this.” 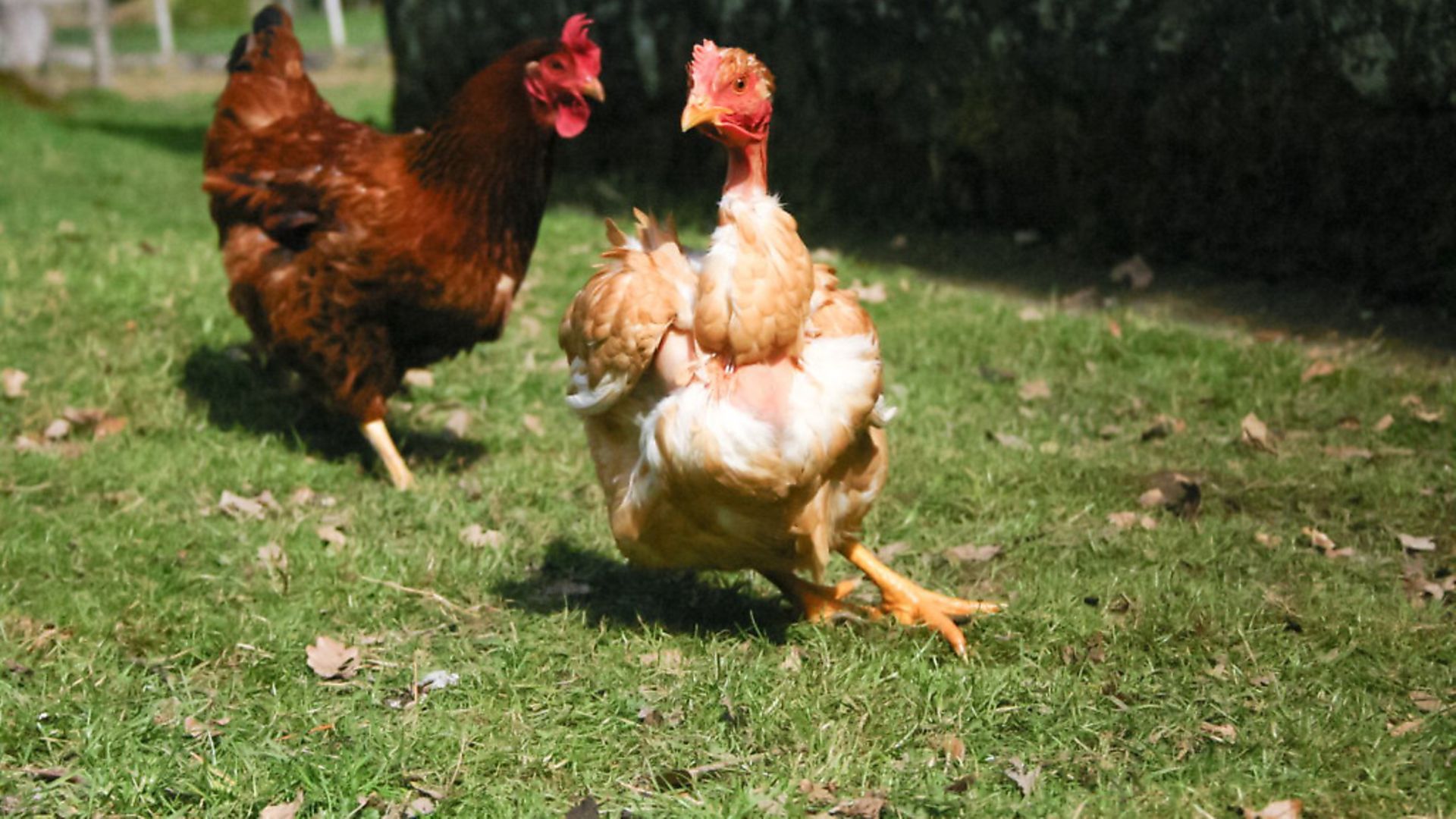 Stress can be particularly prevalent in chickens. How many times have you purchased new birds only to find they become ill within a few days of arriving? “It’s not just coincidence,” says Geoff. “The loss of the familiar, the travelling, the change of environment, of food and companions — it’s all stress. Some birds are more affected than others.”

Other stresses common in chickens include: abrupt changes in the weather, bullying, introduction of new stock, diet changes, confinement and boredom and grief.

Because homoeopathy treats the individual, it’s not as simple to use as conventional medicine. You have to be a good observer and look carefully at the symptoms your hen is showing and give the remedy that covers those symptoms. “If I were to visit a flock of 10 chickens, I’d stop at the fence and observe. Is the one that is poorly with the others, by itself, behaving differently? How does it look — is it sad or frightened? How is it moving? Is it restless, very still or hiding? I’d just look for up to five minutes before asking the owner to fetch the hen. I’d then perform a head to tail examination. When you’re treating individuals, you want the remedy to match the disease, history and also the character of the chicken. All homoeopathic remedies have different characters and each chicken will match to one of these remedies,” explains Geoff. 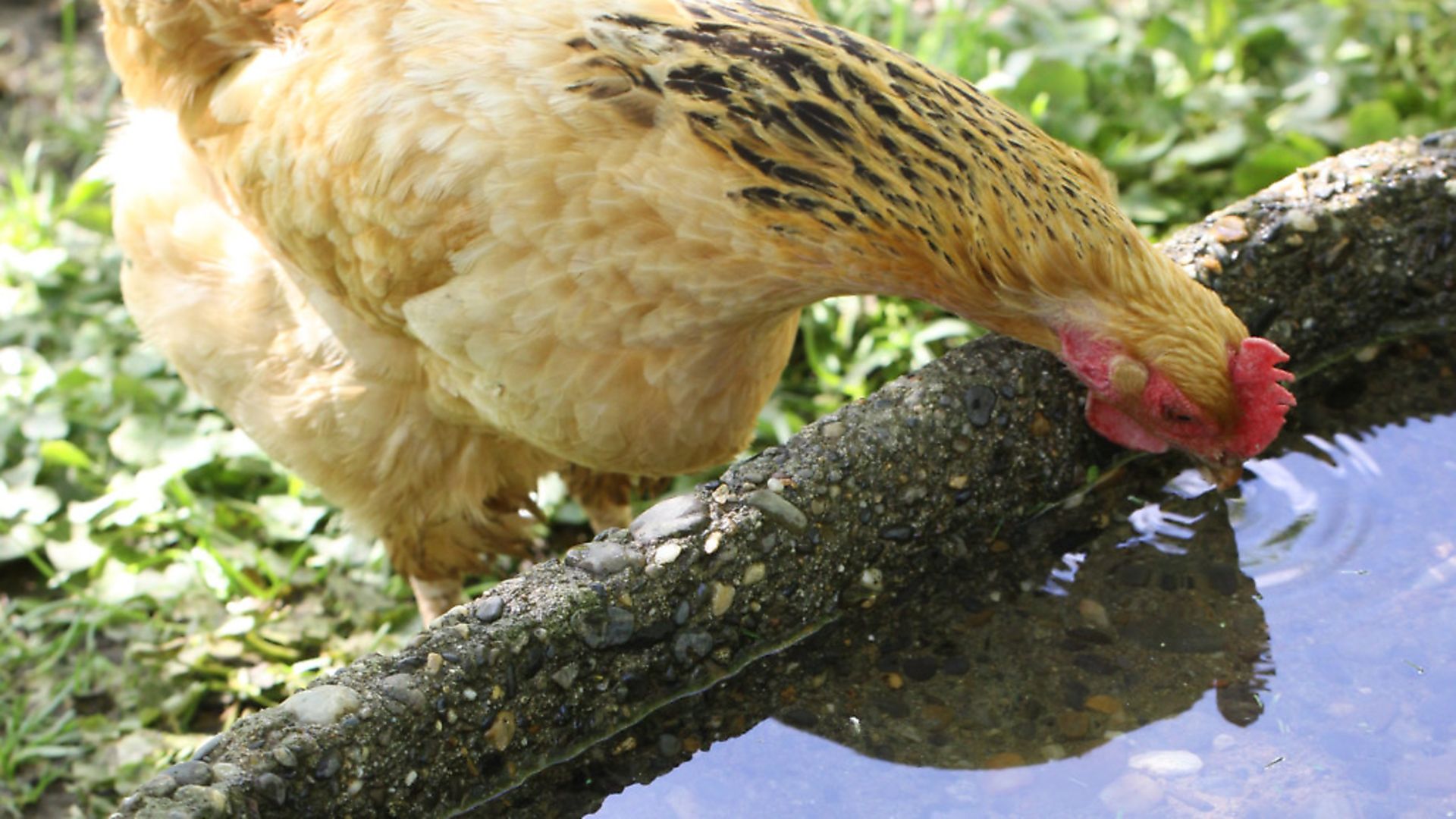 A homoeopathic remedy is made from its mother tincture (the concentrated plant, mineral or animal extract which gives it its name) is serially diluted in distilled water and shaken in a particular way until the desired potency is achieved. “When dealing with mental, emotional or behavioural issues, you would need a strength of 1M for chickens,” advises Geoff.

Homoeopathic remedies are extremely cheap and are not on prescription. Remedies can be purchased at Boots, Holland & Barrett or you can order the remedies from one of the pharmacies listed below — these are run by qualified homoeopaths who are able to give good advice and help. Homoeopathic principles and remedies are the same regardless of animal species, humans included.

“If you want to treat a flock of 20 birds because there has been an emotional upset, for example, moving coop, crush one pill of Ignatia M between two clean spoons to a powder and put it in a bottle of mineral water, two-thirds full. Shake this hard by banging the bottle on a book on a table 20 times — this is called succussing. You’ve effectively turned your bottle of water into Ignatia M. Use this to dose the trough of water and you’ve treated all the chickens for around 5p,” explains Geoff.

“To treat individual birds, for example in the case of bullying, you’d give the bully Lachesis and the one being bullied Staphysagria. Make the remedies up as before. Be sure to use different bottles for each remedy,” cautions Geoff. “Then dose 1ml using a syringe into their beaks. If you can catch the birds, give the remedy during the daytime, otherwise administer it at night when they are on the roost.”

“Homoeopathy stimulates the body to begin the process of cure. As soon as you see changes, that process has begun. You should stop dosing and watch, restarting when needed.”

As homoeopathic medicines are administered in a highly diluted form, there are no side-effects or egg withdrawal period.

Remedies need to be stored in an easily accessible place in the dark, away from electrical devices and strong smelling substances. Ensure that the temperature range is between 2 and 45°C.

“If you know that your hens are likely to experience grief imminently, then there’s likely to be disease.” Geoff continues “If you’re going away and taking your hens to a poultry ‘hotel’ or a friend will be visiting to look after them, give them Ignatia M in their drinking water the day before they / you leave. The person looking after them gives a dose halfway through and then a final dose when they / you return. Animals don’t catch diseases in kennels — they’re stressed, frightened and feel abandoned so their immune system doesn’t work and they become diseased. They catch abandonment and grief and then become ill. By giving Ignatia you can prevent problems arising.”

There are many areas where conventional medicine cannot compete with homoeopathy, particularly in the treatment of stress and diseases deriving from stress.

I explained a recent scenario of my chief rooster being killed in a bird of prey attack and the remainder of my normally free-ranging flock staying inside the coop for two weeks after the attack even in my presence. “This is a perfect case to be treated by homoeopathy,” enthuses Geoff. “The number one remedy for acute fear is Aconite. I’d give 1M in their drinking water and wait to see if they come out the following day. If they remained inside after two days, perhaps it’s more than fear and they’re not confident in going outside without the support of the rooster. I might give a remedy like Pulsatilla which is good for a child who feels unable to go anywhere without holding onto Mummy’s hand. This is a situation where homoeopathy is really useful and conventional medicine has little to offer.”

Despite all the positive evidence, there’s still considerable resistance and scepticism within the veterinary world. Geoff is one of only 150 vets — that’s about 1% of the vets in the country, to have studied the therapy. It takes an already qualified vet or doctor a further four years to become a qualified homoeopathic practitioner. Geoff shakes his head, “It’s not taught in veterinary schools. Sadly many vets discredit it despite having absolutely no knowledge of its use in practice.”

Many sceptics claim that the success of homoeopathic remedies is all down to the mind, a placebo effect. How can treating animals with homoeopathic remedies and curing those diseases all be in the mind? I’ve tried it with success and can only speculate to suggest that its relative cheap effectiveness is unpopular with the growth model of this world.Try it, and see for yourself.