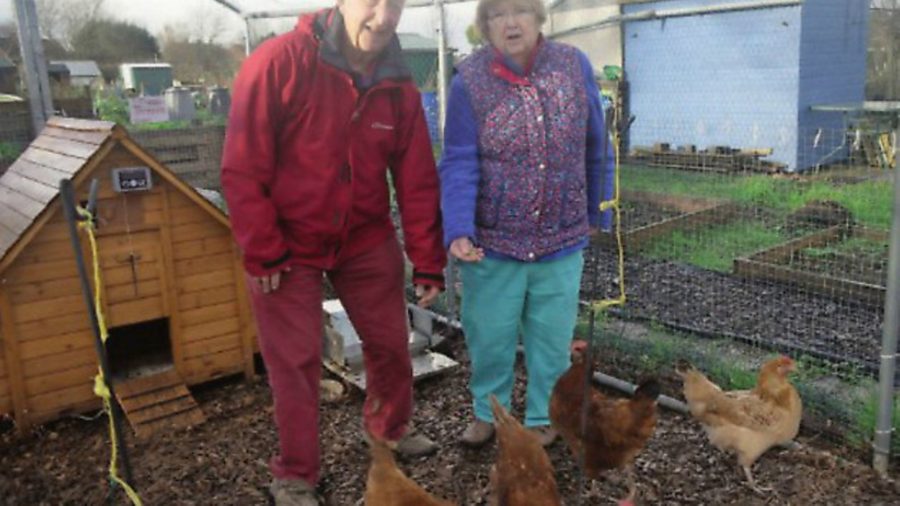 Can you keep chickens on an allotment? Liz Mills, from Worcestershire, found she was able to do so. But our writer Andy Cawthray offers a word of caution…

Liz Mills had been on a waiting list for an allotment near her home in Malvern Link, Worcestershire. “At last I heard I had got on,” she said. “I had been waiting for it for one reason – I wanted to keep chickens again.

“I so missed my daily fresh egg. We sold our smallholding 10 years ago and then discovered the deeds of our new bungalow said we could not keep livestock or poultry. I immediately put in for an allotment.”

When Liz was finally successful, her hopes were dashed when she was told she could not keep chickens on the plot. Some time later, however, the council changed the rules and agreed that chickens could, after all, be kept by allotment holders.

“I am allowed to have five chickens on 20% of the allotment,” said Liz. “I decided I would have a cage 6m by 3m with a chicken house big enough to hold six to 10 birds. This would give them plenty of room.”

Liz and her husband got a cage in kit form from Cocoon Chicken Coops (www.chickencoopsandhouses.co.uk) and, once it was erected, installed an automatic doop opener from Chickenguard (www.chickenguard.com).

“It is still early days, but the hens seem very content in their new home and we are pleased with the way things are working out,” she said. “We are very happy with the way the Chickenguard is working perfectly. It was a great investment.

“People are very friendly at the allotment and many of the holders drop by to see the hens and have a chat.

Allotments were, and still are, provided for the purposes of food growing, so naturally one would imagine that keeping livestock on an allotment would be acceptable.

Be careful, though, before you go down this route. Despite the well quoted fact that under the terms of the 1950 Allotment Act, the keeping of hens and rabbits is permitted on allotments and viewed as an allotment holder’s right, this is only so if they are for the tenant’s own use, and not for business or profit.

It is also not a universal right that covers all allotments, especially as new pockets of land are popping up. Always check your tenancy agreement (and the local legislation) before investing in any livestock, be it rabbits, poultry, bees or any other livestock. In some instances, private landlords may have included a clause prohibiting the tenant from keeping animals on the plot.

? Andy Cawthray runs Chicken Street in Shropshire. He is well known as a ‘chicken pundit’ and writes regularly for Your Chickens.

Resources: You can find out more about keeping chickens on allotments at The National Allotment Society: www.nsalg.org.uk