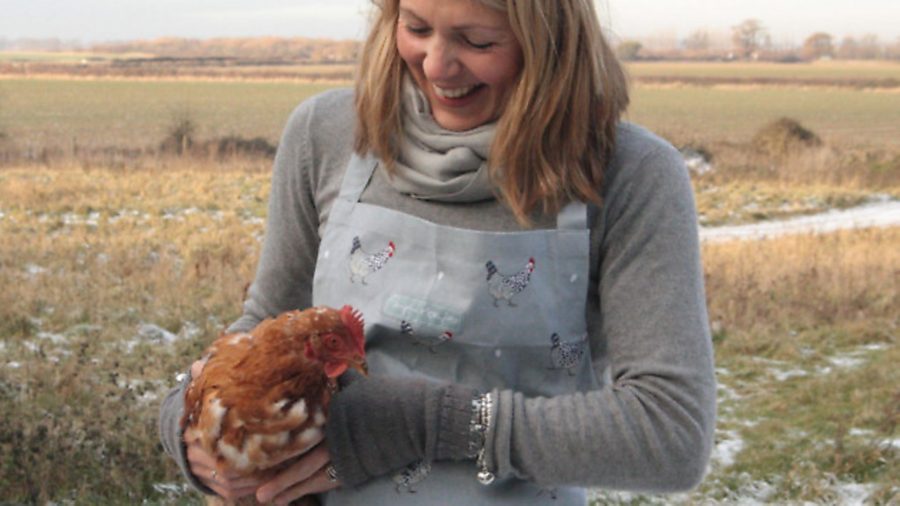 Sophie Allport is a designer whose work features on many of her fine bone china, kitchen and home textiles. Sophie loves chickens and takes some of her inspiration from those of her best friend and marketing manager, Pippa Rymer. Jeremy Hobson talks to both.

What is it about chickens that you both love?

Chickens are so quirky – they all have such individual characters and are so entertaining.They’re lovely to watch. There’s something quite soothing about the ‘cluck, clucking’ noises they make and of course everyone loves the fresh eggs they produce! We both have three young boys and they love scooping them up for a cuddle – and they help in the cleaning out, feeding and egg collection. There’s something very special about your children actually seeing an egg being laid and being able to carry that warm egg into the house – a valuable life lesson.

The first chickens were given to my boys, [said Pippa]. Granny and grandpa gave them as Easter presents. They were rescue Rhode Island girls and proved to be great layers and wonderful pets. More recently we bought three from a local farmshop – one white feathered, one brown and one black. They produce brown, white and blue eggs… [the latter of] which the boys are delighted with!

What was it about chickens that first inspired you to use them in some of your designs?

Having moved to the countryside I was suddenly surrounded by nature and friends like Pippa started to keep their own chickens… The first chicken mug I designed was our ‘Lay a little egg for me’ which features Speckled Marans, Sussex Hens and some rather unusual blue and buff Orpingtons. The fabric collection followed with inspiration taken from the Speckled Marans – I just loved the colours of them. It quickly became our best-selling collection.”

What it is about their inclusion in your work that attracts your customers?

Hens are more than ‘egg producers’ – they are genuinely loved pets. Each hen has a different personality and her own quirky behaviour which is a very endearing characteristic. Our range of chicken china and kitchen fabrics quickly became our best selling collection so we extended the range… it seems that chicken ‘fans’ want chicken designs on lots of things – we had requests for ironing board covers, Aga hob covers and oilcloth by the metre. The sage grey coloured fabric is also very popular.

I believe your most recent chicken venture involved fertile eggs bought via eBay – can you tell us more?

I had two broody hens [explained Pippa] so bought six fertilsed Legbar eggs on eBay as a bit of an experiment. They arrived in the post in a standard egg box and I immediately popped three under each of my hens. 21 days later all six hatched… We were able to sex the chicks straight away as they are the only breed that have different feathering at birth. The three cockerels were sent to a local farming friend that wanted them while the remaining three were very happy with their foster mums!

Being involved in design, do your chickens live in a specially-constructed ‘des-res’ palace?

They have a lovely area of the garden but I’m afraid it hasn’t had any special interior design or architectural effort! [laughed Pippa] There is a fox proof high fence around the compost area (which they love) with a triangular structure inside the fencing for them to roost and lay in. They’re often let out into the garden to gorge on fallen fruit, bugs and to dodge the boys’ footballs!