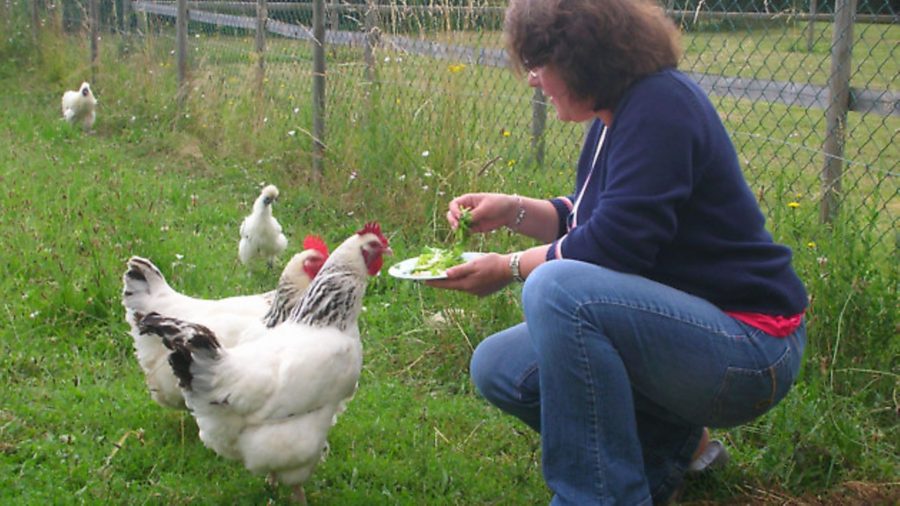 This month: Jeremy Hobson talks to Helen Tait-Wright, an independent dress designer and keen chicken-keeper living and working in France

What’s the greatest pleasure you get from your chickens?

That’s easy. It’s the lovely fresh eggs which taste so different to shop bought ones. You can’t beat them! But the chickens do also make me laugh, and I enjoy them clucking around outside.

Who first gave you an interest in chicken-keeping?

I grew up on a farm, and my grandma, who lived next door in the old farmhouse, always kept chickens. I used to go round collecting eggs with her, so I suppose the interest grew from there. For Christmas we used to fatten up a large flock of chickens to sell for the table, but the farm chickens were pretty much free range, and it was fun looking for the eggs.

How long have you been keeping chickens?

I first got chickens of my own in 2005 when I moved to France. The first lot were Black Rocks and Marans. Since then I have had several Light Sussex, who are excellent layers… but my absolute favourites are the Silkies. I must admit I usually pick breeds because I like the look of them. I’d certainly recommend Light Sussex if you are looking for egg output, and the Silkies if you want something eye-catching and amusing.

What’s your daily routine as far as your chickens are concerned?

It’s pretty simple really. I let the birds out in the morning, and give them their breakfast – a mixture of layers pellets, mixed corn and sunflower seeds – and check they have water. Then they have the day to themselves in their run, unless I go out to give them kitchen scraps. I usually feed them again between 5pm and 6pm, depending on the time of year (corn only at night), then go and shut them up once they have put themselves to bed. I interact with them more in the summer months as we are out in the garden more, and they get grass cuttings when we do the lawns.

Do you/have you ever used feathers (chicken or otherwise!) in any of your dress designs?

I have never used chicken feathers that I am aware of, although I suppose I might have bought feathers that had been dyed, but yes I have used other feathers. Much of my couture work is with bridal wear, and I have used marabou feather many times as a trim on winter outfits. It has an almost ethereal quality as it is so light and fluffy. Feathers are also popular in bridal headwear, but they tend to be large and dramatic ones.

I’m currently working on a dress for a bride who is theming her wedding around peacock feathers, so we have taken some of the colours from the feathers to create the colour scheme for the dresses. The peacock feather is significant for her as her family have an Indian connection. I had always thought that peacock feathers brought bad luck, so I was surprised at her choice, but in fact, peacock feathers are more revered in India than anywhere in the world.

With your eye for design, do your chickens live in a house and run created by you, or are they kept in a similar way to most others?

As it happens, I did design where my chickens live. They have part of a building which was created to also house a feed shed/ tack room and an open field shelter for our pony. So, I suppose it is slightly different to where most people’s chickens live.