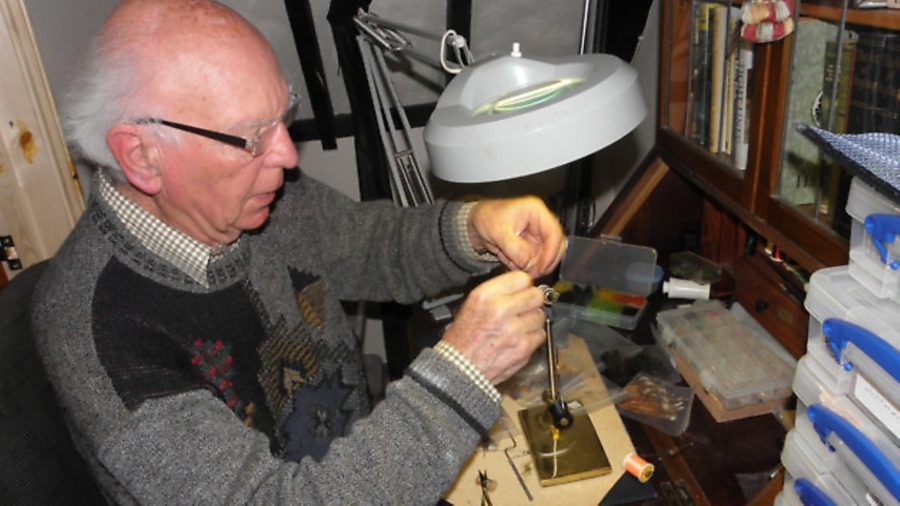 How long have you been keeping chickens?

Not all that long! The family bought a farm in November 2013, and we inherited seven retired battery hens. I then felt I would like to start a small flock of some of the old traditional breeds so I got some Light Sussex eggs, borrowed an incubator and hatched the eggs. I also got some Pekin bantam eggs and did the same with them. The Pekins produced two males and four hens which, being unrelated, made two nice breeding trios.

Did you encounter any unexpected problems when you first began?

Not really – except that I seem to get more males than females from each hatch! From the outset I knew I needed to be sure of building secure enclosures in order to keep out the predators here in the New Forest. With more experience I would like to breed more of the old traditional birds whose feathers are used in my hobby of fly dressing.

As chairman of the Ringwood & District Fly Dresser’s Guild, I’m guessing that some of your chickens’ discarded feathers will already have been icnorporated into fishing flies. What types of feather do you find most useful?

We use feathers from the cape and the saddle. The feathers from a mature cock bird are stiff and, when wound around a hook, stand out at right angles to the hook supoting the fly on the surface of the water. It also leaves little dents on the surface film which we hope the fish will see as being the feet of the insect floating down towards it.

Basically, what we are trying to achieve is an artificial insect that a fish considers good enough to eat.

Feathers from hen birds are much softer and these can be used in what are known as wet flies that are worked below the surface to replicate the insects as they are ascending through the water to hatch into a mature insect, as opposed to the dry fly that sits on the surface. The feathers from hens can be used from quite an early age as we are only looking for softness and movement in the water. The feathers for the dry fly ideally need to be stiffer so those from the more mature bird are better suited.

Bearing in mind your interest in fly-dressing, if you were ever to expand you flock, what other breeds would you consider – and would you choose a breed purely for their feather potential?

There are many patterns of trout flies that have developed over the years and used feathers from many of the old breeds of bird that are now considered ‘at risk’, endangered or even extinct. For instance, the Playmouth Rock with the grizzle feather was once a common sighnt in every farmyard when I was growing up, but nowadats us rarekt seeb except perhaps on the show bench and perhaps in a few fanciers’ gardens.

That’s interesting… so avid fly-dressers could, indirectly, be helping ensure the future of some chicken breeds?

Not only do we use the feathers from domestic fowl, but also those from many of the more common [and sustainable] game birds – the ring-necked pheasant, for exampkle. At one time, feathers fro fly-tying came from abroad and from bird species that are now endangered and, quite righly, the collection and export of their feathers banned.

To replicate these, domestic fowl feathers can be dyed to produced the colours we require…. And a greater availability of breeds such as the Plymouth Rock can only be a good thing whether you are a fly-dresser, chicken-keeper or, like me, a combination of the two!