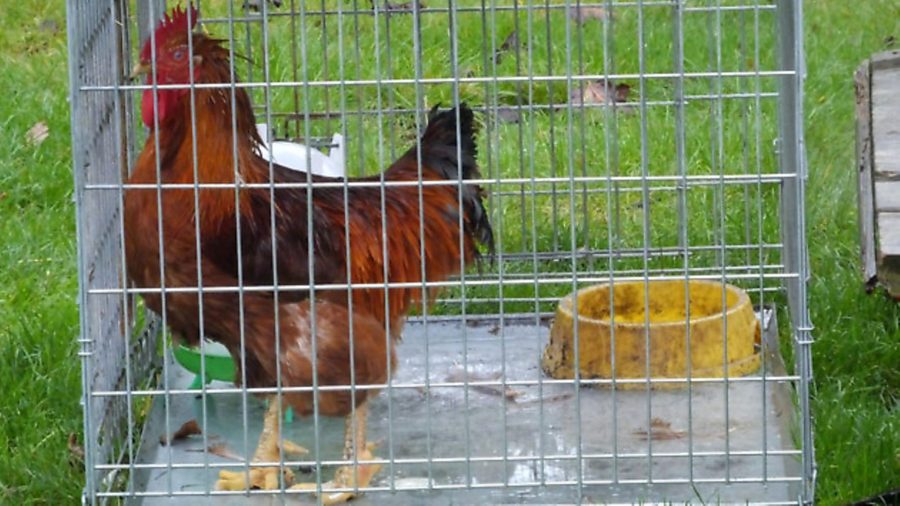 I spoke too soon about Svenson the cockerel, who far from being in rude health has apparently been very ill.

He has a swollen foot and I misdiagnosed the cause as Bumblefoot, a fungal problem, often accompanied by a scab on the foot’s pad, which in Svenson’s case was missing. In fact the problem turned out to be a less specific, but very nasty infection, which depressed his immune system, but the animal carried on pretending to be fine, until he developed an impacted crop.

Instead of strutting about the garden he retired to the hen house nest box, where I found him looking tired and unhappy. His crop was bulging and squishy, his foot once more enlarged and hot.

I put the bird in an isolation run, and spent the next week bathing the foot in iodine and massaging magnesium paste into it, offered him tinned sweetcorn, and paid him several visits a day to massage his crop.

Five days later and he’d perked up a little, his crop shrank and his appetite returned, but his foot was looking worse, and one morning I let him out to discover that one toe had been badly damaged. I called the vet.

Cockerels are highly strung, and although Svenson has always been pretty good natured with people, he loathed being handled, had been hatched in our garden and had never left it, so I did not look forward to taking him out of it.

We once had a cockerel called Zorro, who on a trip to the vet became so stressed that he collapsed and died, so once Svenson had been stuffed into a cat box, I covered it with a large old jacket to make it as dark as possible. The bird hunched inside it and looked miserable.

The vet’s prognosis wasn’t good. He reckoned the foot had been injured and become badly infected. He used the words ‘necrotic tissue’, and said that the damaged toe would have to come off.

‘Dead tissue,’ said the vet. ‘He has no feeling in that toe.’

I had two options. Full surgery including a general anesthetic and a £150 bill, or a quick, apparently painless toe amputation, clean up and then spending a week giving the bird anti- inflammatories, antibiotics and painkillers. Total bill £80. I went for the cheaper option.

Ten days after the amputation and I really don’t know where we are. Often ill chickens rally quickly or expire. Svenson is eating well, and although resistant to the daily Savlon slatherings, does not appear to find having this stuff worked into his foot painful, but he is spending a lot of time sitting down, limps when he runs and seems reluctant to put weight his damaged foot.

Is he suffering? Again, I find it hard to tell, because his posture, which isn’t hunched and moribund, would suggest not, and his new, post-molt plumage is coming along nicely, which hopefully means that less energy going into producing feathers and more into getting better. However, I get the feeling that his previous zest for life is missing, that everything is more of an effort, and I’ve been around domestic fowl for long enough not to ignore gut instinct about how they’re coping.

All this means another trip to the vet, which neither he, I, nor my bank balance, is going to enjoy.