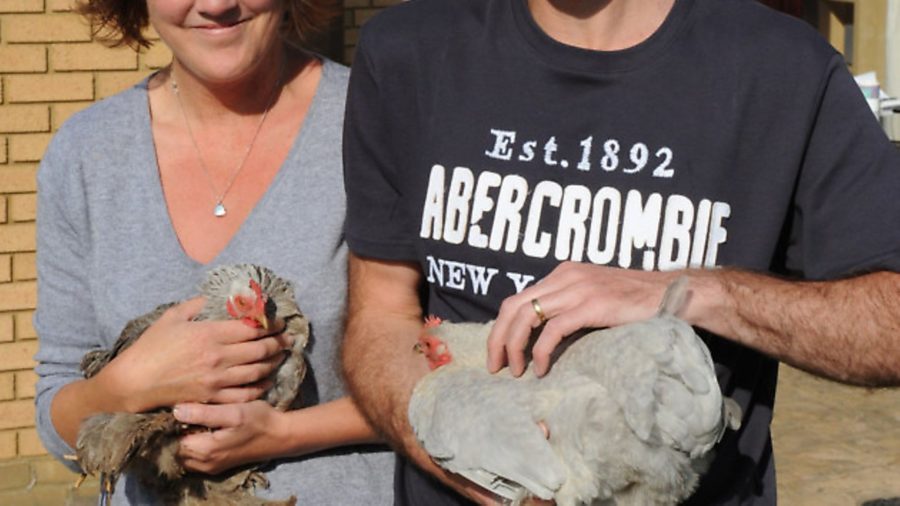 Phil and Lesley Carline had no interest in keeping chickens… until fate stepped in. Now they are hooked. Rob Morris reports 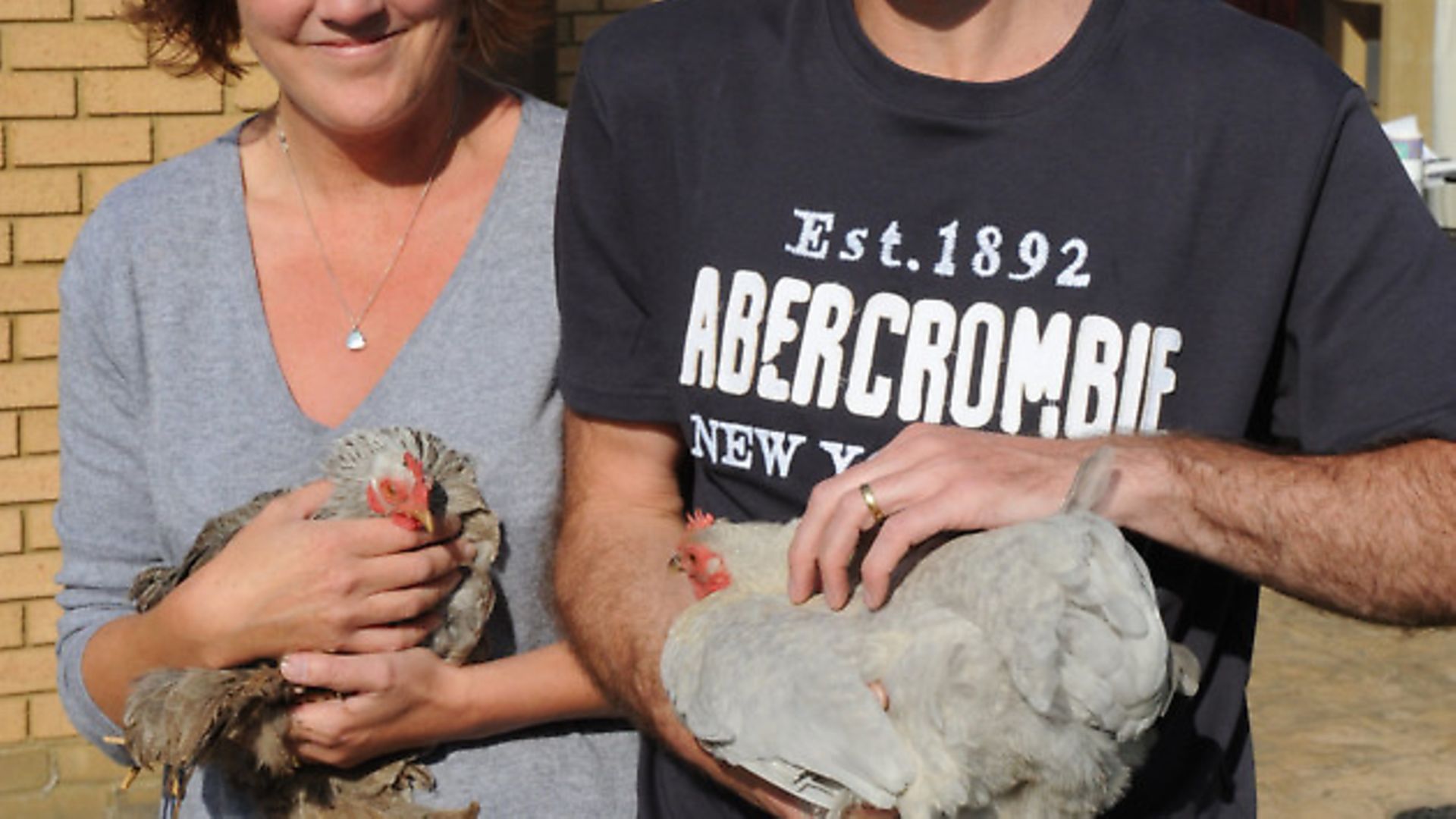 It all started one wet afternoon when Lesley and Phil Carline were out for a country walk with their dog Chester from their village near Peterborough two years ago.

Phil saw what he thought was a bedraggled pheasant with a few missing tail feathers in the hedgerow… but then they realised it was a bantam hen. They took the bird home, gave it some food and water and put it in the garage until they could work out what to do next. Lesley said: “The only suitable place to keep her temporarily was our tool shed, so that was cleared out and a makeshift door made with some chicken wire.

“Knowing nothing about keeping chickens, I intended to pass her onto a friend at work who rescues ex-battery hen. But I noticed that the hen was stretching its neck and making a funny sound. After some research on the internet, I realised she might have worms. We bought some medication from a poultry supplier with the aim of treating her before introducing her to my friend’s flock… but by this time I was getting attached!”

Phil said: “I knew we were keeping her as soon as Lesley named her; it was bound to happen, so I just had to accepted it. We then got a small coop and run and moved it around on the grass each week. Then we got two more hens as we couldn’t leave one on her own. 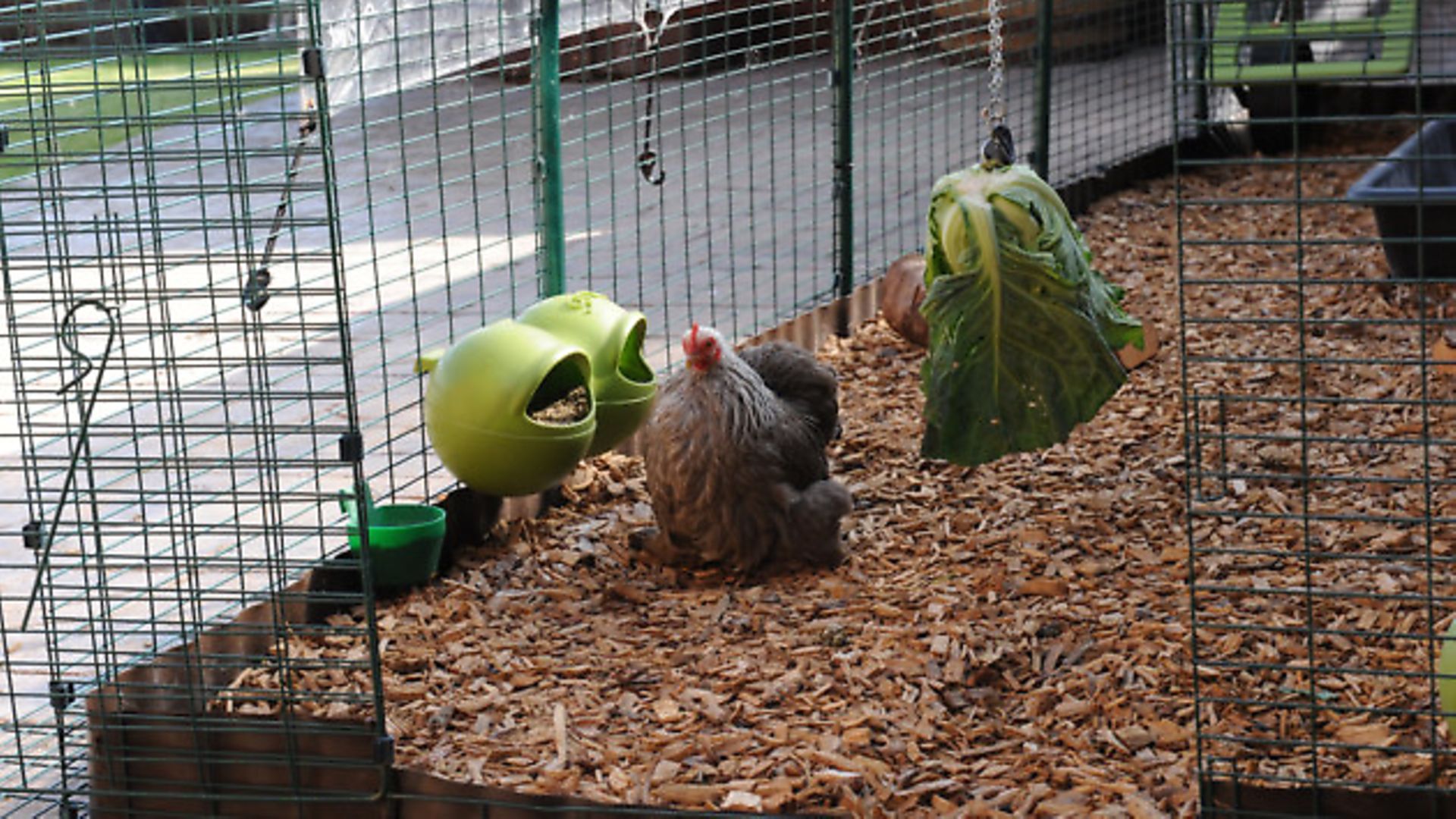 Lesley said: “Within weeks we knew we wanted to add to the flock so we brought two more and decided to have a permanent set-up on the patio. We bought the Omlet Eglu Cube system which is easy to keep clean and we believe doesn’t have the same level of problems with red mite that wooden ones can have.

“The sections of the Eglu are easy to remove to get access for cleaning and replacing the bedding and to collect the eggs. The floor is covered in hardwood chips but we also grow seed trays with grass to put in the run. The birds do get to wander around the garden each day, but we don’t let them out unsupervised. The dog puts up with them but isn’t overly keen.

“To be honest, we didn’t go about getting hens in the normal way … it all just happened. That first one was a ‘Chicken of Fate’! It’s been great to have them around and they are so friendly. When we first found our original girl, I had no idea that bantams didn’t lay in winter and was desperately hoping to see an egg every morning. I learned I’d have to wait, and was thrilled when suddenly there was an egg in the nestbox a couple of weeks later. I proudly handed it to Phil … who then dropped it! I was about to scream at him… when it bounced! Phil had planted a rubber egg that looked realistic as a joke. Of course, eventually they started to lay and the difference with the eggs from those from the shop is almost unbelievable.

“I love their different plumage, but I was worried when they started to moult – suddenly they were almost like porcupines. The hens are always a topic of conversation at work. A colleague even knitted a woollen jumper for one of them! I post about them on Facebook and am often asked when the next installment is due. I’m also a member of some of the chicken groups on Facebook. Most people are really helpful. It’s also nice to chat with other henkeepers both in the UK and overseas.” 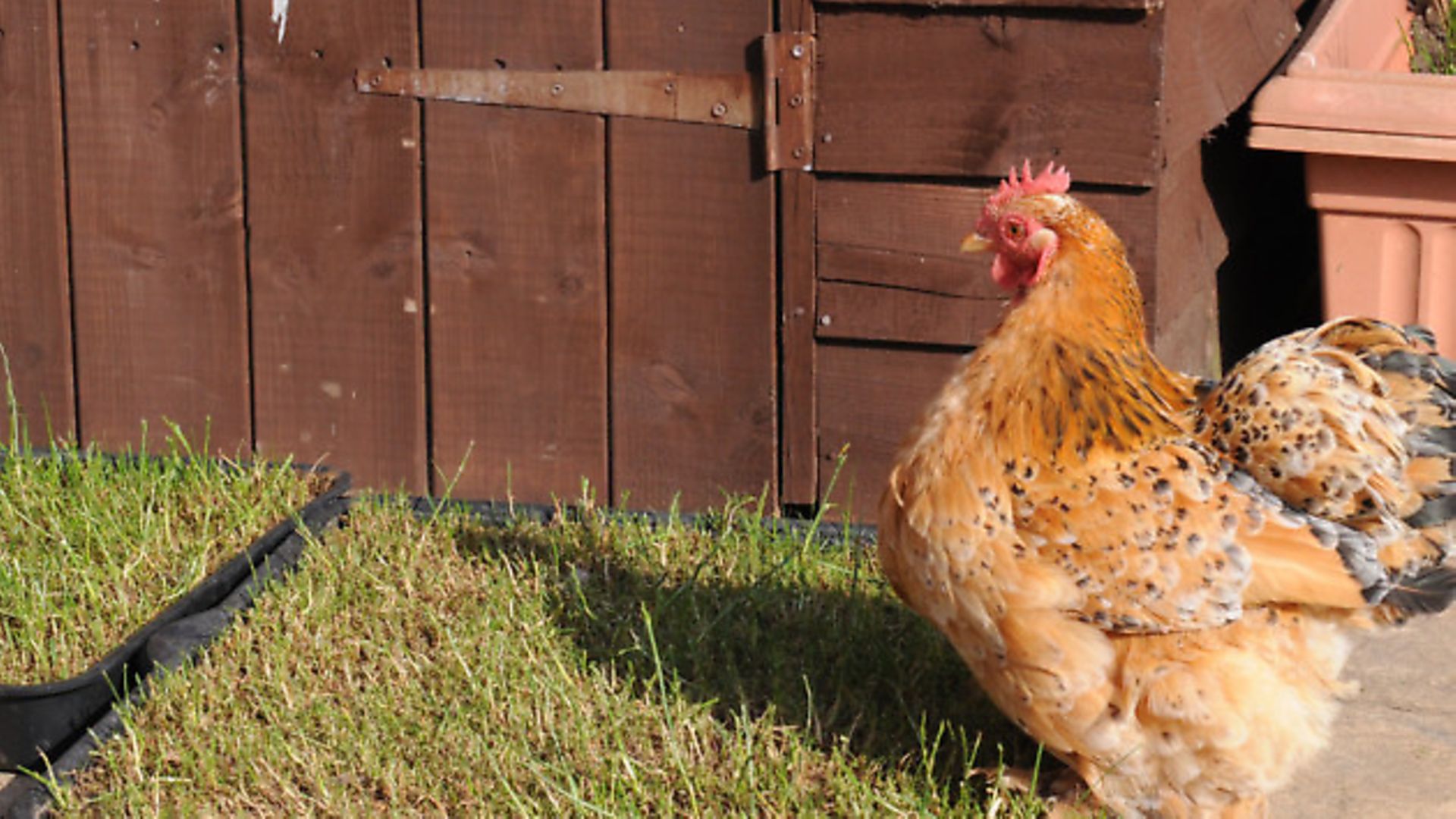 Phil said: “Lesley recently went on holiday with some female friends and left me to look after Chester and the girls. I was given a list of things to do, and whenever she contacted me it was always to check on Chester and the hens… never about me. I know my place!”

Lesley, a midwife at the local hospital, finds keeping hens very relaxing.” I love being able to spend time with them and get to know each of their personalities. I also love to see them free in the garden. “We were doing some work in the garden recently, trying to lift some slabs, and the birds were scuttling around eating all the bugs. It was tricky working with them under our feet, but it was also fun. They’re incredibly nosey.”

Lesley and Phil reflect how that country walk with Chester in 2013 opened a door to a fascinating hobby. “It really was the start of an adventure – into the wonderful world of keeping hens.” 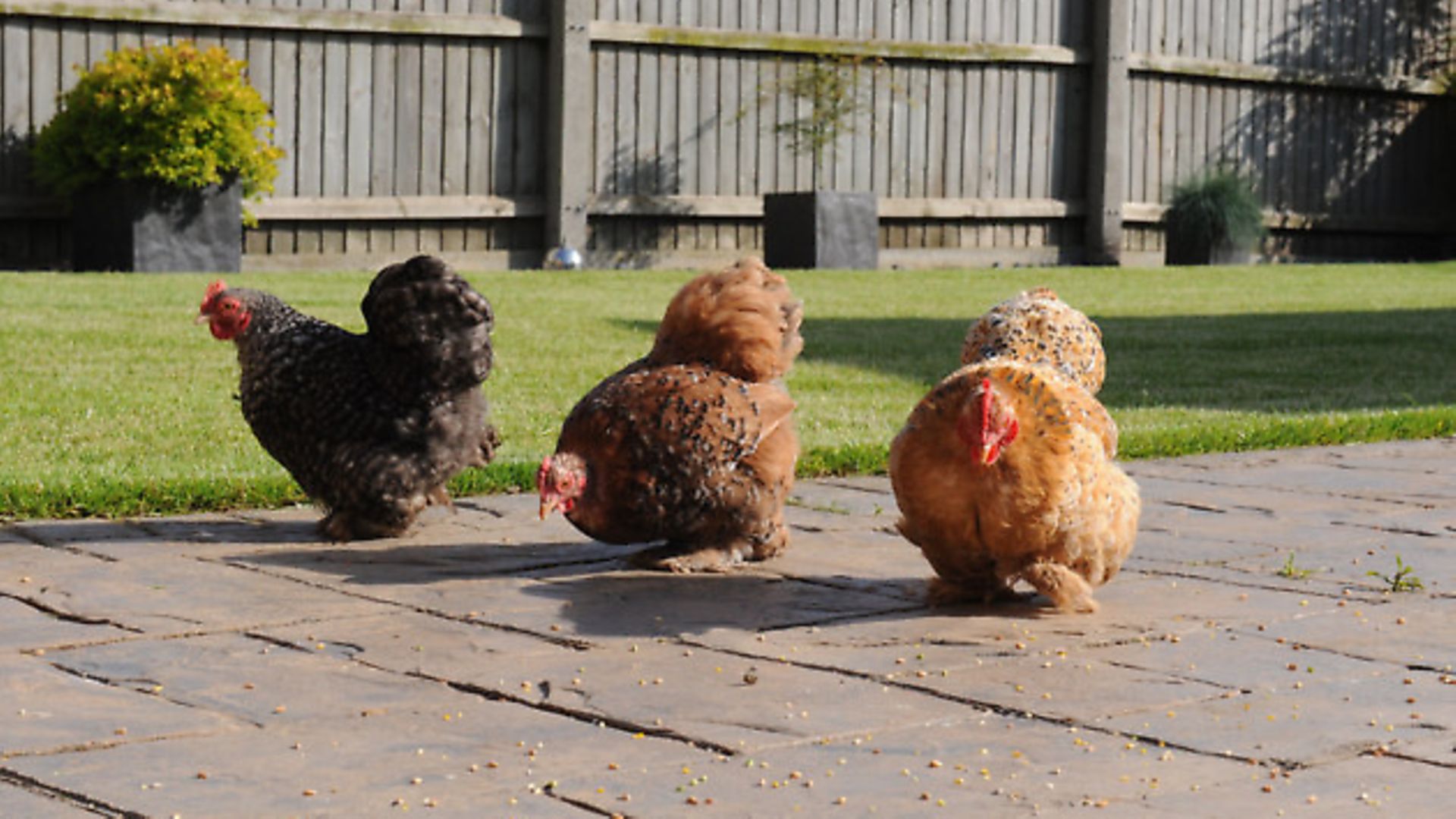 The couple live in the village of Yaxley, and have open fields at the back of the house. Although they have occasionally seen foxes, they haven’t suffered an attack. “Perhaps this is because we have a male dog and the urine smell is supposed to help deter them,” said Lesley.

“We did have a problem with a persistent rat some time ago, but that’s to be expected with the fields at the back of us. We won’t use any poisons though as we see barn owls over the fields and don’t want them affected by eating poisoned carrion.