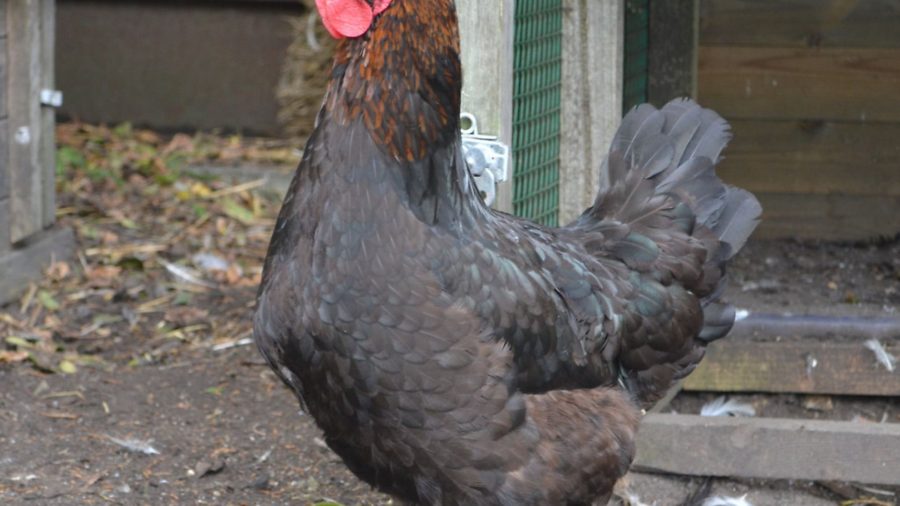 Charlotte is given two Marans to add to her flock 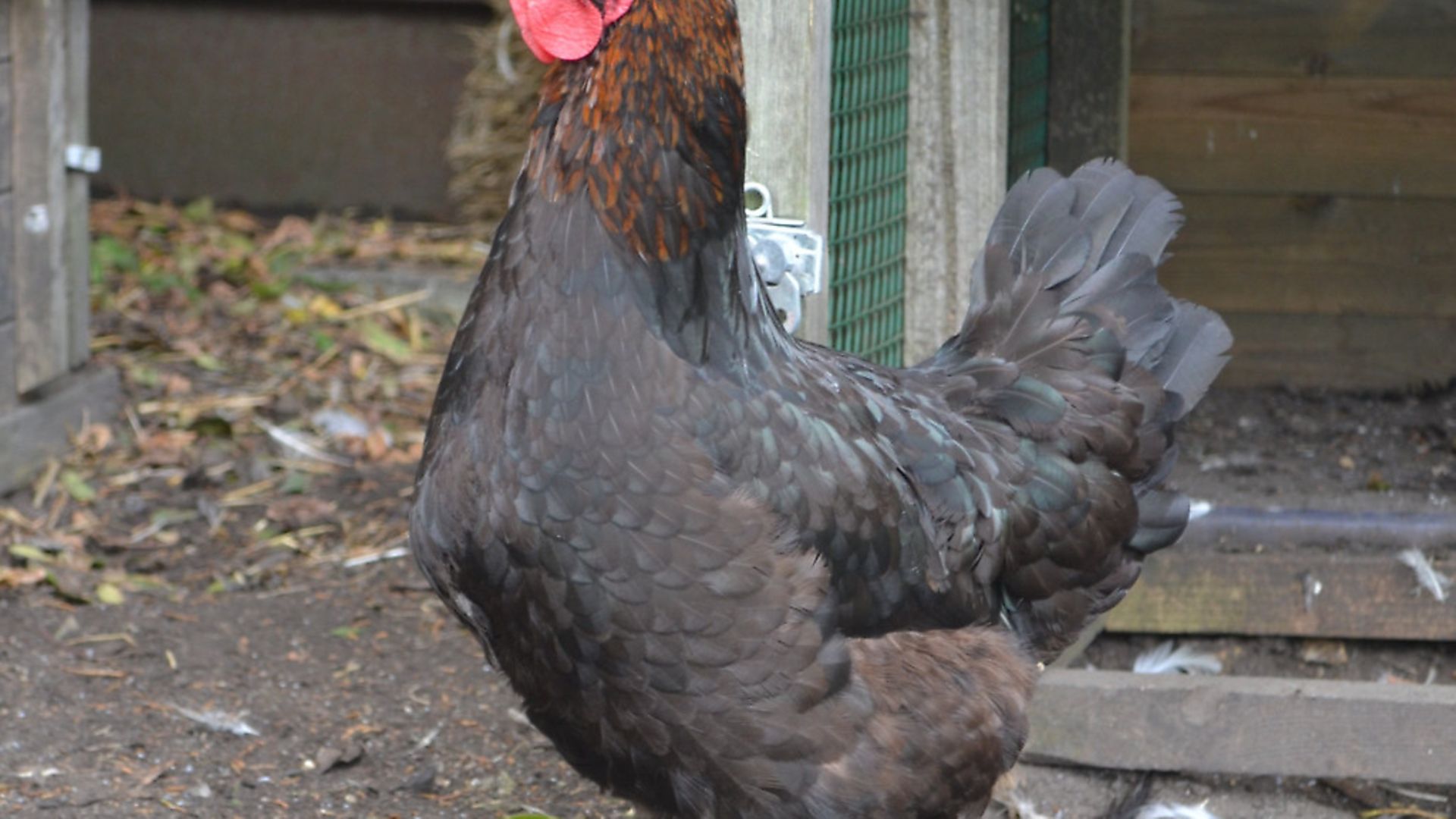 I am not sure why it keeps happening, but I have been given two more hens: a French Copper Black Marans and an English Cuckoo Marans. They are already three years old but will hopefully lay a good batch of dark brown eggs next spring – yes I’ve got a bit of time to wait. I think my friends felt a bit guilty because both the hatching eggs they gave me only produced two cockerels! These two new hens were very nervous and unfriendly to start with and things haven’t improved now that I have let them out to join my flock. This is understandable if they weren’t handled much in their previous home where they were probably left pretty much to their own devices. They look in very good health, though and the Copper Black has a beautiful red comb! I did lose both my Copper Black and Copper Blue in the last year or two so it is nice to have a couple of replacements. 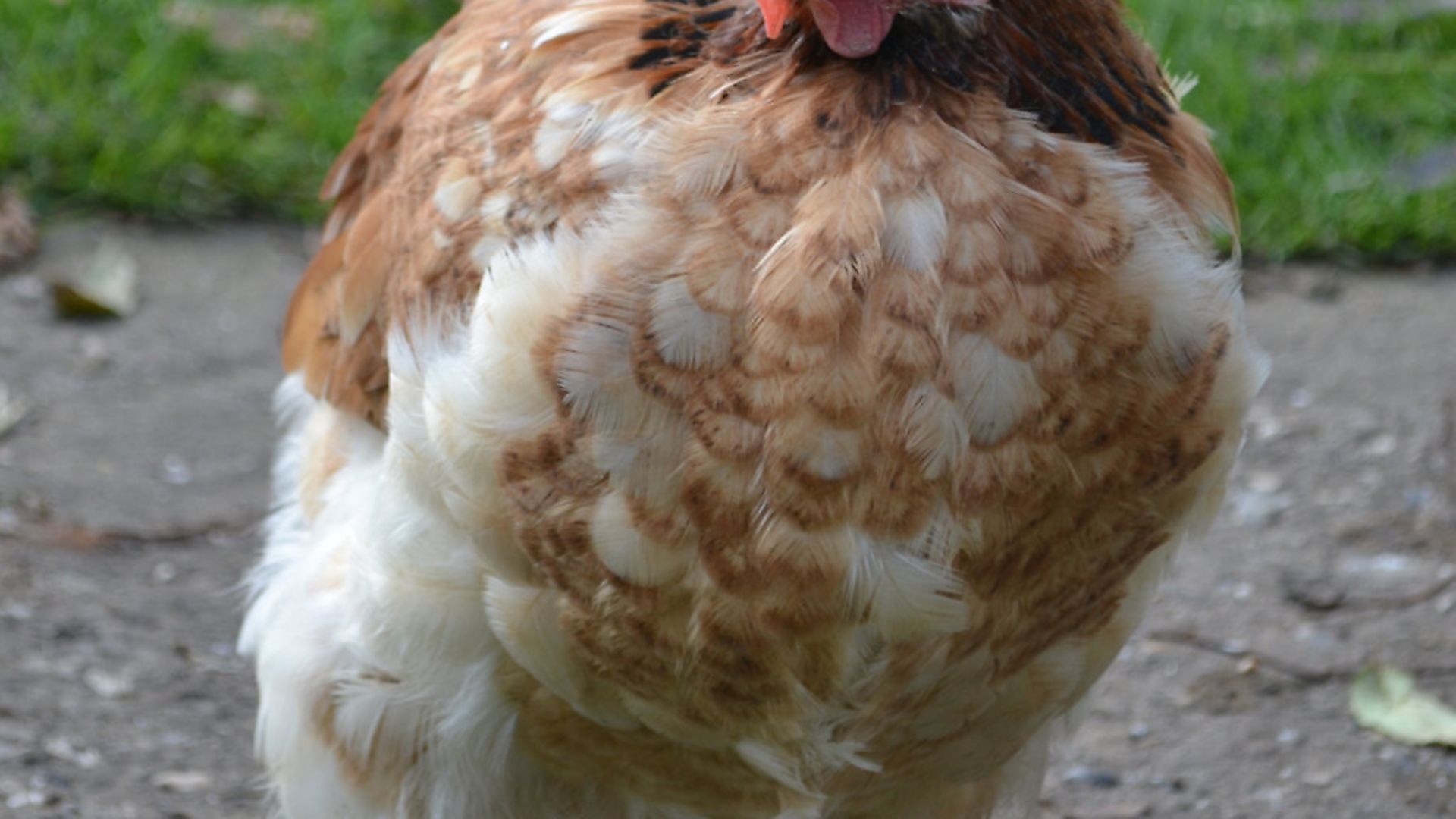 I didn’t manage to sell any of my new Fayoumi crosses so have a total of seven new hens, but they look very pretty as part of my flock as they have such beautifully coloured feathers! I am quite glad now that I didn’t sell them as they should lay well next year.

Although leaves are a pain to sweep up, at least raking them up also gets rid of loose feathers and chicken pooh scattered across the lawn and will make a great mulch when composted down. Beware though; make a pile of leaves, leave it for two seconds and ten to one a hen will have scattered them to the four winds within a minute!

Winnie seemed really unwell recently. She was at the start of her moult but I thought she was on her last legs as she is about six years old and her partner died a year or so ago. She was not eating and was light as a feather. She was standing hunched up all day and taking little interest in anything. But she has pulled through; she is a good way through her moult now and is looking much better. She is eating and cackles away happily when I put the feeders out in the morning. Just shows that sometimes there is a happy ending!

Often those to whom I sell eggs do not understand why my hens do not lay in the winter and sometimes remark ‘oh it’s so cold, I’m not surprised they have stopped laying’. I try and explain it’s all due to the light.

Hens possess a complex mechanism. The hen’s pineal gland, part of her endocrine system, sits above her midbrain, behind the eyes. This gland produces melatonin, which helps regulate sleep and other body functions. As the days lengthen, her pineal gland responds by sending a hormone through her body to her ovary to start producing eggs. As the days shorten, the pineal gland stops sending this hormone. Since the gland is light-sensitive, you can fool it by increasing the amount of light available to the hen during the autumn and winter.

For optimum laying a hen likes 16 hours of light with only eight hours of darkness. Lighting can be fixed in hen houses, with a timer, in winter but should be used to provide extra light for two or three hours before dawn rather than in the evening, to allow hens to roost naturally. As a general rule, a 40-watt bulb for each 100 sq ft of henhouse should suffice to keep hens laying year-round. Use incandescent bulbs rather than florescent lights, as the wavelengths of incandescent bulbs are closer to those of natural sunlight. It must be said though that I would never use artificial light. I like my hens to have a rest in the winter and, since hens have a finite number of eggs that they will lay in their lifetime, I reckon this means that they will live longer and have more of a chance to go broody, hatch some chicks and live a more natural life.