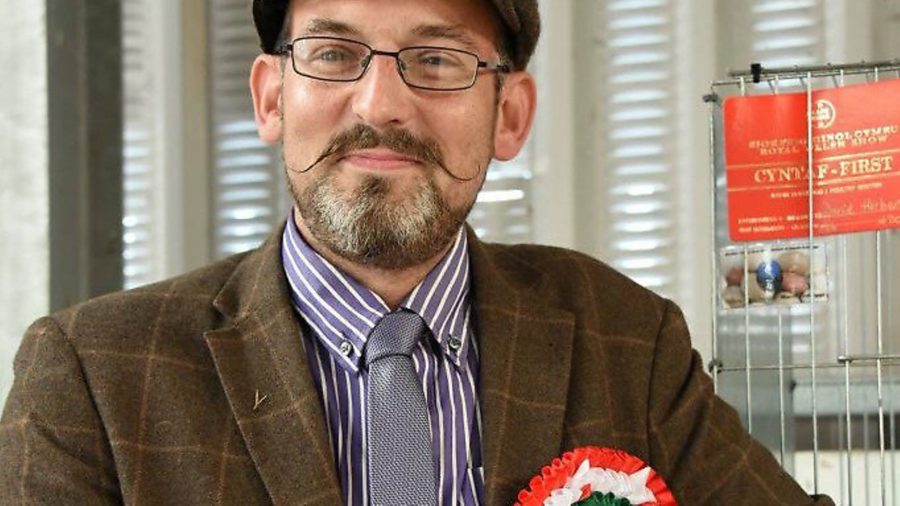 Most of us chicken devotees have been to an agricultural or poultry show at some point. You’ll be familiar with the sight: rows of beautiful birds, all shapes, sizes and colours with delighted show-goers enthusing about the chickens’ attributes. But how many have noticed the egg classes? Most poultry shows have a selection of classes for competitors to exhibit eggs and it’s become the fastest growing sector of The Fancy, the exhibition world. Whilst many shows became victim to avian influenza restrictions last year, egg showing continued in many cases and helped maintain a presence for all things poultry during the season. It’s a fascinating aspect of the hobby – full of its own intricacies and characters.

Meet David Herbert of Hermit Crab Eggs, now Wales’ most successful egg exhibitor, and winner of 477 awards since he started showing in 2013. Last year was a real watershed moment for him as he undertook to push forward the profile of eggs and egg showing.

“What a year 2017 was!,” said David. “We got to 14 shows across the UK, with 236 awards for our troubles. We were also lucky enough to be featured on ITV Wales’ Coast & Country as we clinched the much coveted Champion Egg prize at Royal Welsh Agricultural Show.”

It all began for David after a visit to his local agricultural show, Bedwellty, in 2012. It was the first time he’d stepped foot in a poultry tent and was immediately fascinated. Keen to learn more and get involved he ‘hatched’ a plan.

“Walking into the section for the first time was amazing, such an array of birds on display – and eggs too! I knew I wanted to be part of this. Thankfully my amazing wife was on board, and so it came to pass that the following Valentine’s Day Mrs H bought me a coop and my first three chickens. Three became five, then nine, and by that summer I was in a position to have a dabble at showing locally.”

David built up a varied flock, with many different breeds chosen and bred specifically for their egg sizes and colours.

“There are Copper & Cou Cou Marans for deep brown, chocolate coloured eggs, Crested Cream Legbars for their beautiful range of blue shell colours and for large, paper-white eggs we favour the White Leghorn – one of these, Jet, laid eggs that took top prizes at Royal Three Counties, Royal Welsh and Royal Cheshire.”

“There’s a multitude of other breeds so we’ve got a veritable rainbow of colours to choose from. We’re currently breeding some olive and mottled egg layers to really stand out on the show tables.”

What is about eggs that excites him and fostered this interest?

“I absolutely love seeing the birds at shows and have entered the odd chicken or duck, but the truth of the matter is that I simply don’t have the resources to adequately house and prepare birds specifically for showing. The flock all run free-range, enjoying as wonderful a life as we can give them and in turn I can enjoy a leisurely egg matching session over a glass of wine with no danger of feathers blocking the bath and the resultant ear bashing that would be sure to follow!”

“It’s never a case of ‘an egg is an egg’; I just love the intricacies and challenges of showing a perfect specimen. It’s not as simple as most people think. For a good egg you need a bird in good condition, good husbandry and environment. All have to be optimal to have a chance at laying top quality eggs. Get it wrong and you could have pale yolks, thin shells, a decrease in production, etc.”

“It’s then a case of taking a trayful of eggs and examining them in fine detail. I don’t want to see calcium deposits, staining, bulges, dimples, pimples or wrinkles. If the egg’s too small, too large, too round or elongated then it’s rejected. I’ll then match up eggs of the same shape and colour to make sets of three, six and sometimes 12 matching or complimenting colours (dependant on the classes on offer.)”

“Making matters a little more complicated we only use fresh eggs – this is paramount. And with never more than 50 birds at a time, there aren’t always that many to choose from, particularly if we’ve got two shows in quick succession.”

“This year I hope to get further around Britain, in particular up to Yorkshire and Cumbria where there’s a strong history of The Fancy. Hopefully the breeding plans from last year prove their worth and we’ll have some exciting colours and can build on the success so far.”

“I’m also looking forward to meeting new people and sharing my passion. If you ever see me at a show come and have a chat. I’m always happy to share tips, experience and to otherwise bore the pants of anyone who’ll listen!”

Days after speaking to Your Chickens for this article, Dave suffered a catastrophic fox attack that wiped out most of his laying and breeding stock, leaving the future of his enterprise and his plans for the future hanging in the balance. But some time later he contacted us to say: “Subsequently we’ve had amazing support and offers of help to get us back on our feet and now I know we are going to be just fine, although the hard work all starts again!”