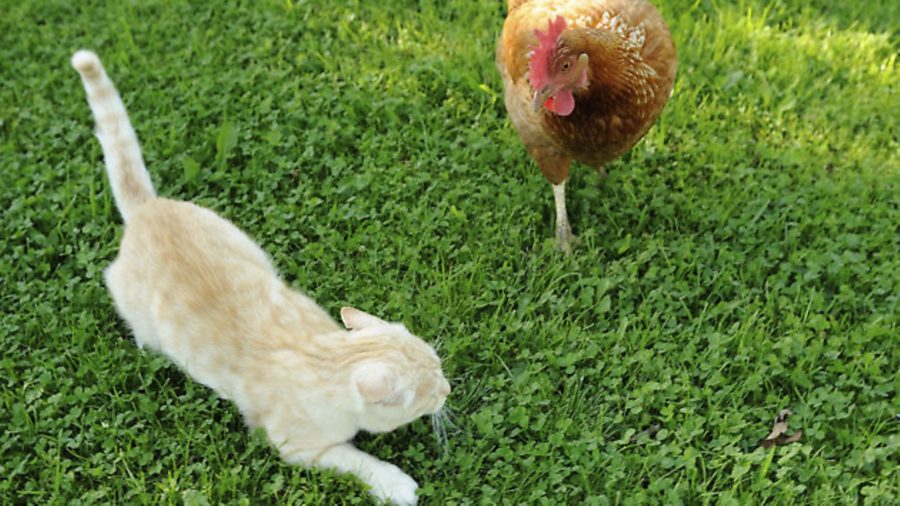 The next part of this month’s Ask Our Experts features tips on keeping chickens warm and comfortable in the winter, advice on a cockeral struggling to crow and whether pet cats are a danger to hens

Q: I bought four hens earlier this year and love them dearly. They’ve enjoyed the summer sunshine, but I’m worried about how they will cope in the winter. I’ve read that chickens are descended from jungle fowl, so will they be OK living outside?

Anne Perdeaux says: Surprisingly chickens are more affected by heat than cold. Overheating can quickly prove fatal, so it’s important they always have access to shade. In winter, as long as their henhouse is weatherproof and not too large for them, they will keep each other warm. Make sure there is some outside shelter from the prevailing weather, and carefully check the henhouse for draughts or leaks. Don’t forget ventilation, even in winter, as lack of airflow causes dampness. A good layer of bedding aids insulation, as well as helping to dry off wet feet and feathers. Supply extra feed along with some grain in the afternoons, and your chickens will be able to generate their own ‘central heating!’

Cock has lost his crow

Q: I have some bantams and a bantam cock. He’s a super little bird – I bred him five years ago. I’ve counted how many times he’s crowed in the day – 14 times. Now he has stopped crowing, and I am wondering if he has a sore throat? He tries to crow, but just a screeching sound comes out. Could this be because of moulting?

Victoria Roberts says: The male hormones influence not only the shape and colour of the feathers but the voice as well. If he is in the moult, this may well be the reason for his voice getting a bit scratchy. If, after he has moulted, it does not return to normal (some cockerels crow all year round, hormones or no), worst case scenario is he may have an aspergillus infection in his syringx (the voicebox which is at the bottom of the trachea, not the top as in mammals). If his breathing is normal, it is likely to be the moult; if his breathing is heavy or very obvious, you should get him looked at by your vet.

Are cats a danger to hens?

Q: We have seven chickens, three large hybrids and four Wyandotte bantams. Would a neighbour’s visiting cat pose any threat towards them, as our hens are sometimes out in the garden?

Anne Perdeaux says: Chickens usually seem very capable of dealing with cats. Although we often have cats coming through the garden, they’ve never given our free-range flock any trouble. A friend even found her hens eating out of the cats’ bowl – while four cats looked on in horror!

Still, animals don’t always behave as expected, so it would be a good idea to keep an eye on your chickens until you are sure that the cat is not a danger.

Bear in mind that cats will certainly take chicks, and very tiny bantams could also be at risk – although I should think that your Wyandotte bantams would be big enough to take care of themselves!

Q: I have two six-year-old hens left out of ten. My daughter has eight hens/bantams nearly two years old. Would it be possible to put her eight in with my two old girls? I don’t want my girls to be bullied. The coop holds 18 hens and they have a big run with lots of trees. I would appreciate your advice.

Jeremy Hobson says: Introduced carefully there should be very little problem in introducing your daughter’s chickens to your birds. If possible, pen the two lots separately but in a place where they can see and hear one another. Keep them apart or two or three days and then, at dusk one evening, put the new chickens onto the perch with the older residents. The next day, the size of the coop and run should help in ensuring that there little or no bullying – the ‘newcomers’ will be so busy exploring their new surroundings that they won’t have the inclination to intimidate your two ‘old girls’. You may, though, have to lift some of the birds onto the perch for a couple more nights until they all get used to one another.

Did rat poison cause deaths?

Q: My neighbour lost of three of her chickens last month, and the vet said they’d died because they’d eaten rat poison. Two weeks later another hen died with the same symptoms. The hens are enclosed in a pen and can’t get out, so how are they getting at the poison? Is there anything else that might have caused these deaths?

Michelle Dunn says: Many modern rat poisons work by preventing blood clotting. If the vet did an autopsy then the very low levels of vitamin K in the bird’s blood would make it a positive diagnosis. Sadly, chickens do not need to eat rat poison themselves in order to suffer the consequences. Mice and voles can be victims of rat poison, and chickens will often peck at injured or dead rodents. Poisoned mice contain enough toxins to kill a chicken. Because mice will store food, you can still have poisoned mice in an area weeks after all rat poison has been removed, which is probably what happened to the hen that died two weeks later than the others. Wildlife-friendly rat poisons are available which help stop these accidents.