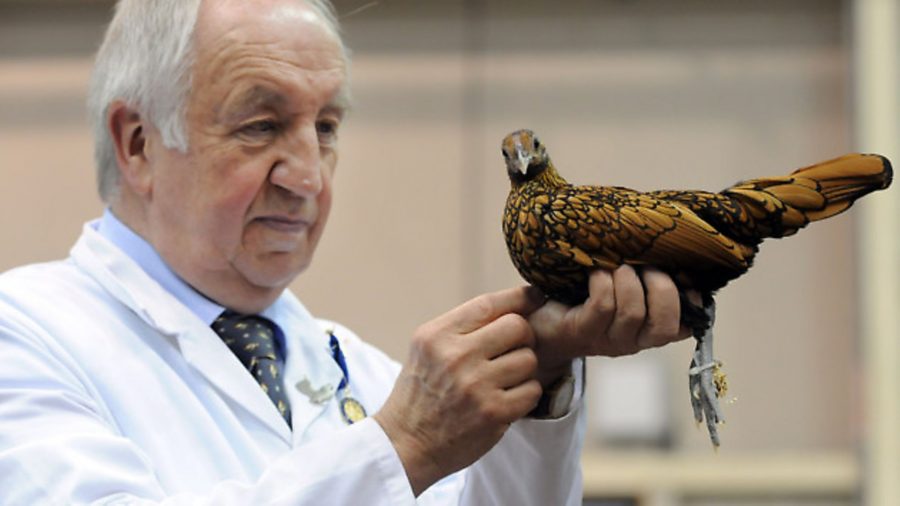 This month, Jeremy Hobson talks with Chris Parker, vice-chairman and past President of the Poultry Club of Great Britain, show judge and bantam exhibitor of note

I can clearly remember at the dinner table one evening my father announcing that we were going to move to the countryside. At the time I was nine years old, living in a town centre and had no idea that this move would bring about such a great change to my life. My father was leaving his post at Blackburn Cathedral to take charge of a country parish and my new home would be a vicarage with a large garden. In no time at all my new friends had introduced me to bantams and there were Spangled Old English Game bantams on the vicarage lawn. Later I acquired some Gold Sebright bantams after seeing some at Blackburn Show… and I’ve kept them ever since.

Apart from Sebrights, what other breeds do you keep nowadays?

Black-Red Ohiki bantams. I had seen these beautiful birds on a visit to Japan in 1998 when nobody had hardly heard of them and along with the late Richard Billson, I introduced them into the UK via a good friend in Germany. They are now kept throughout Europe and are growing in popularity in this country… At first it was very difficult to win any prizes… but now they are being awarded top prizes in Rare Breed classes.

What is it about bantams that you prefer over large fowl?

Keeping bantams suits my life style better than keeping large fowl as I am often away from home and they are easier for family and friends to look after in my absence. Also with Sebrights they breed very true so it is possible to have success in the show pen without having to breed hundreds of specimens.

Your name is synonymous with the Poultry Club of Great Britain – as its current vice-chairman, what are your main duties within the club?

I have always believed that the poultry fancy needs a governing body to be the guardian of the Breed Standards. The club is there to help the back yarder as well as the exhibitor. There is such a great deal to learn about poultry keeping and the club tries to answer all the many queries received on a daily basis – and I know that many back yarders enjoy the publications. However I realise that more of the work of the club is connected with the exhibition side of the hobby and the council would always appreciate any suggestions or ideas from small chicken keepers of ways that might increase their involvement in the club.

I joined PCGB over fifty years ago… I see my most important task as supporting the chairman… When he is away it is important to have someone to take charge who is already up to date with club affairs. I am also involved with finance, judging tests, workshops, publications – which involves a good deal of proof reading – welfare issues and European relations. When I had the honour of being President from 2010 to 2012, I also tried to promote the club as much as possible both at home and abroad.

What words of advice would you give to anyone contemplating keeping chickens?

Take time in choosing the breed you wish to keep; just as someone would choose a dog to suit their circumstances, the same principles should extend to choosing poultry. If possible visit a show and talk to breeders. Avoid purchasing stock blindly on the internet as buying from reputable breeders is far better. The Poultry Club is happy to help where possible in putting newcomers in touch with breed club secretaries.