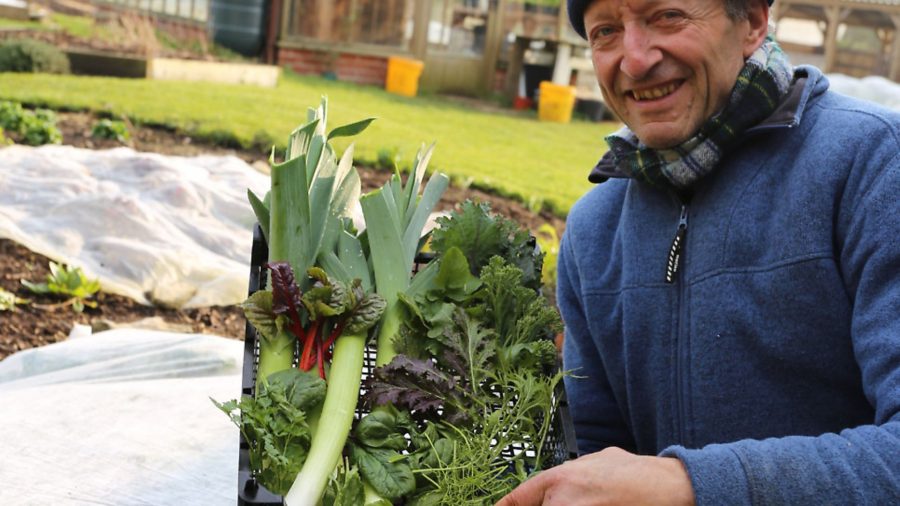 What should you sow during the cold months? Charles Dowding offers advice on winter vegetables, compost, weeding and more 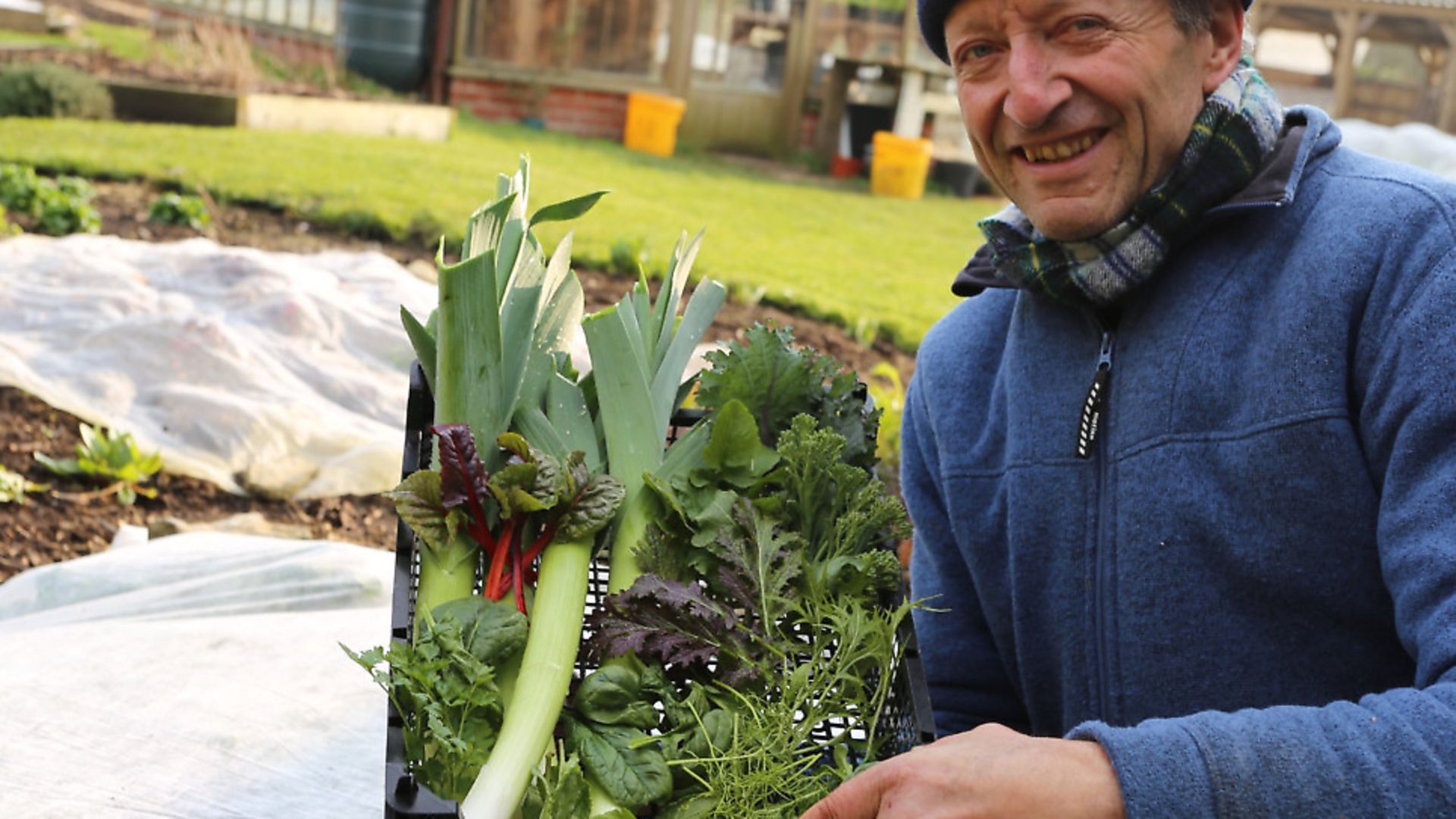 Make only a few sowings. The beauty of spring is that there is always more light ahead, and usually more warmth, so later sowings tend to catch up with the earlier ones. As well as that, they grow more healthily from being less subjected to cold winds and frosty nights, which we are sure to see plenty of yet.

Germinating seeds do not need sun, they need warmth, so you can put seed trays in a corner of any warm room, or a warm cupboard, until you see leaves popping up. This usually occurs within a week – so don’t forget them.

After mid-February, the seeds to sow are lettuce, spring onions, peas for shoots, early cabbage varieties, such as Greyhound, plus calabrese, coriander, parsley and dill. Why not try Cruiser, a new variety of coriander which crops for longer before flowering and grows large, fleshy leaves.

The ideal root vegetables to start undercover are radish, turnips, bulb onions and Boltardy beetroot. Multi-sow them in module trays to plant with their friends in clumps of four plants/clump on average for medium-sized bulbs. Multi-sowing saves greenhouse space, compost and planting time. There is no rush to sow tomatoes now because sowings around mid-March soon catch up earlier plantings. It is also true to say that later sowings make sturdier plants as the light levels improve. Only chillies, peppers and aubergines benefit from sowing this early. 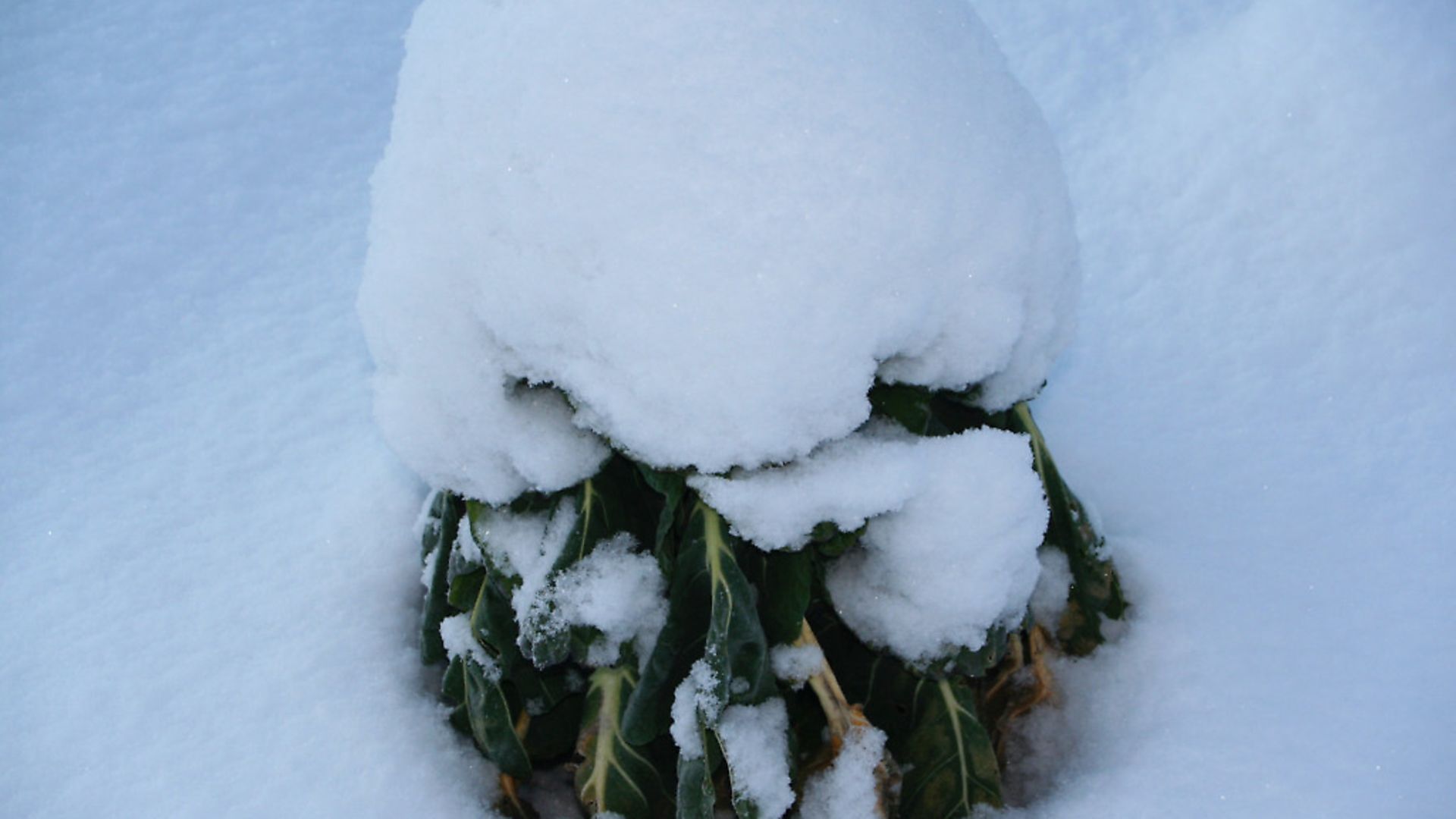 This is a lean time for new harvests. Most winter vegetables are either in store or in the ground after doing most of their growing last year. Last February, my store consisted mostly of root vegetables. They are easy to keep for many months, just stored in boxes, crates or sacks. The simplicity of keeping them is due to the fact that…

There is no need for packing roots in sand, as long as you don’t wash them before packing;

Large roots store especially well, from drying out less. It is a myth that large roots are woody. All of mine are tender. For example, we grate the large beetroot for salads. Roots are not woody or fibrous when grown in fertile, well fed soil and sown in their right season.

Outdoor harvests at this time of year consist of leeks, kale, parsnips, savoy cabbage, Brussels sprouts and salad leaves if the weather is kind, or if you covered plants with a cloche or fleece. The hardiest salad plants are lambs lettuce, land cress, spinach, Grenoble Red lettuce and Claytonia/winter purslane. 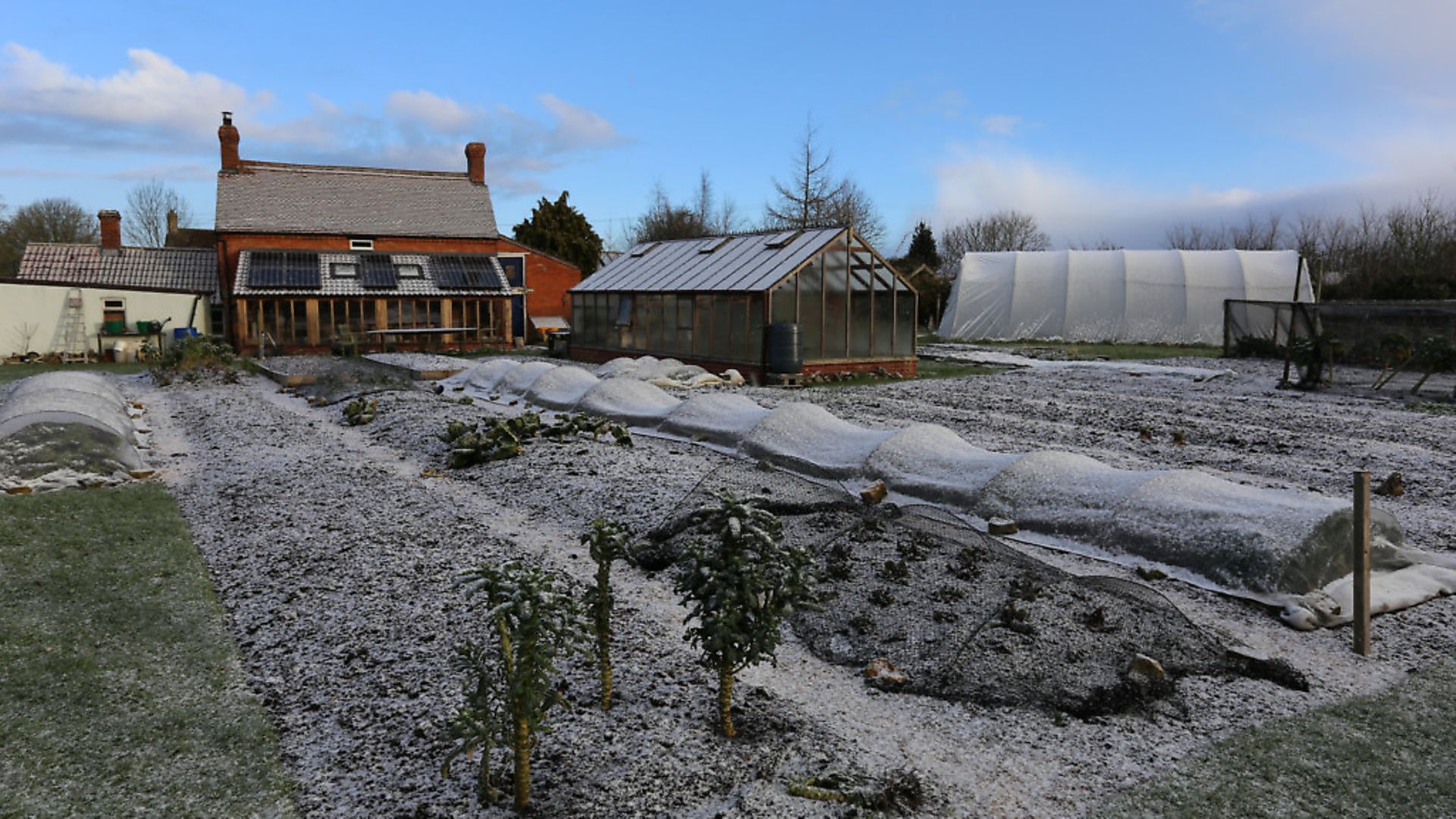 To weed or not to weed

In mild weather, early weeding is worthwhile to keep the ground clean until sowing time and to prevent weeds such as bittercress, groundsel, meadow grass and chickweed from seeding. At Homeacres I don’t have problems with these weeds thanks to one of the best aspects of no dig, which is that few weed seeds germinate. Chickweed, for example, is absent from most undisturbed soil, whereas it proliferates after passing over it with a rotovator.

Another advantage of no dig is that weed seedlings are easier to pull out of a compost mulch than out of soil. The compost may be your own, or green waste, or old animal manure, or leaf mould, or mushroom compost, or old woody materials. In fact, you will be spoilt for choice!

For composts with weed seeds, be ready with a rake in early spring to knock the surface compost around when those seeds are germinating, even if they are barely visible in terms of leaves. Do that on a bright and breezy day for the satisfaction of easily eliminating hundreds of tiny weeds-to-be, which will save so much time later on. 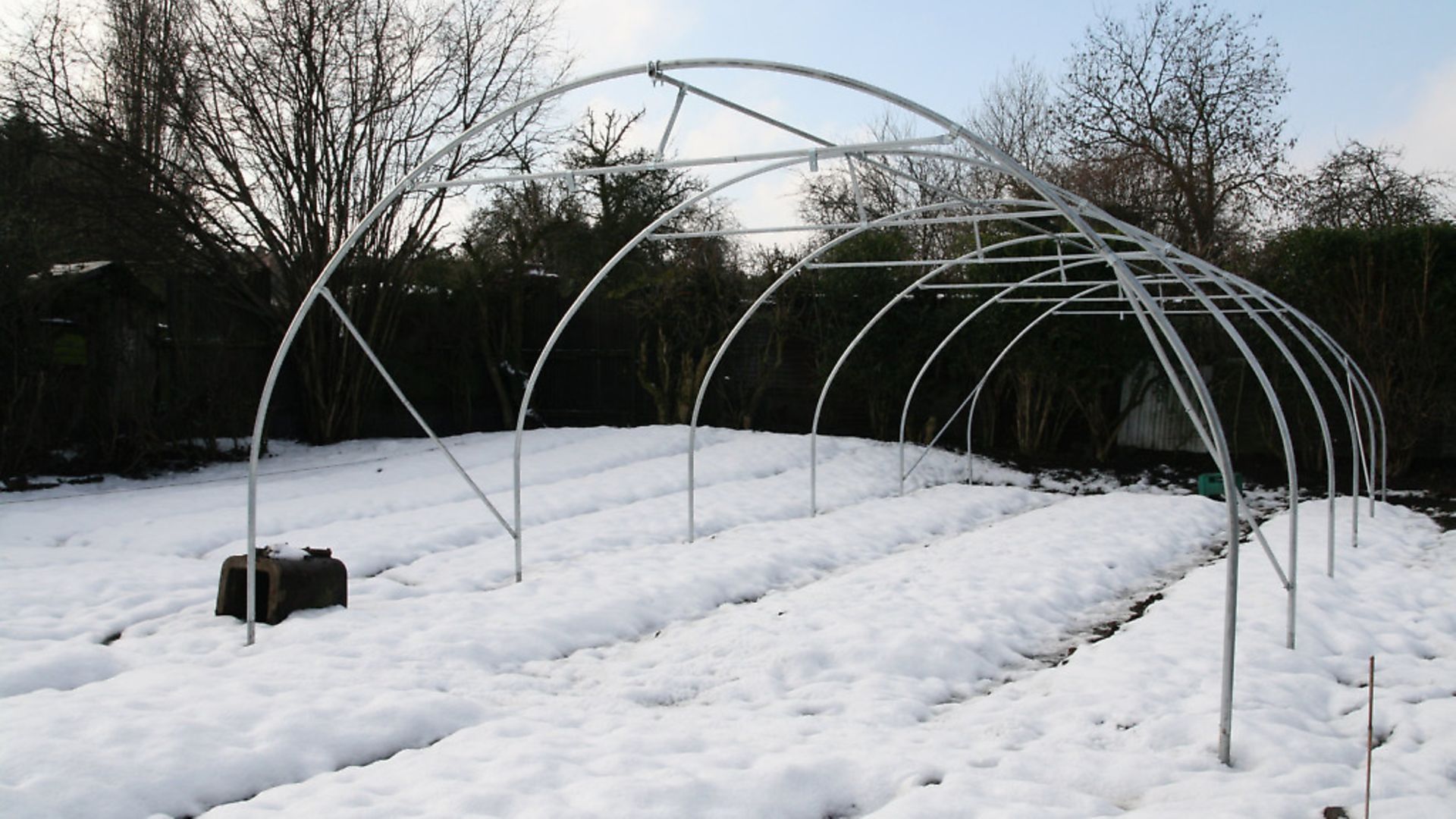 What is the difference between soil and compost?

There is much misunderstanding over the difference between soil and compost. I received an email from Roman Jonczy in the Czech Republic, which illustrates this perfectly. He works as groundsman for a school and had amassed large piles of compost from the mowings of leaves and grass. In his first year of growing, he followed my advice and enjoyed huge success with simply adding this compost as a surface, mulching layer which he planted into.

In year two he wanted to extend the school garden, but had insufficient compost. He started by spreading 5cm of shredded leaves on close-cut grass in the autumn since there is an adjacent forest. He then looked to buy compost.

“I was planning to use a 15cm layer of compost, but the company discouraged me from doing so. Their opinion is that compost can only be used diluted with soil and they sell a mix of soil/compost in a 3:1 ratio for planting. They think that a 15cm layer of just compost would be too strong and nothing will grow in it – according to them.”

This is totally untrue, yet I hear it often and it worries people unnecessarily. I have sown/planted into composts of all kinds, always with success. For example, on BBC Two’s Gardeners’ World screened in April 2017, I was filmed filling and planting a new bed. I did all of this within 20 minutes of tipping compost onto the weeds – and the bed was planted up. After all, many of us buy compost for propagation. Don’t be confused by the people who do not understand this, including – and often even when – they are in positions of authority. 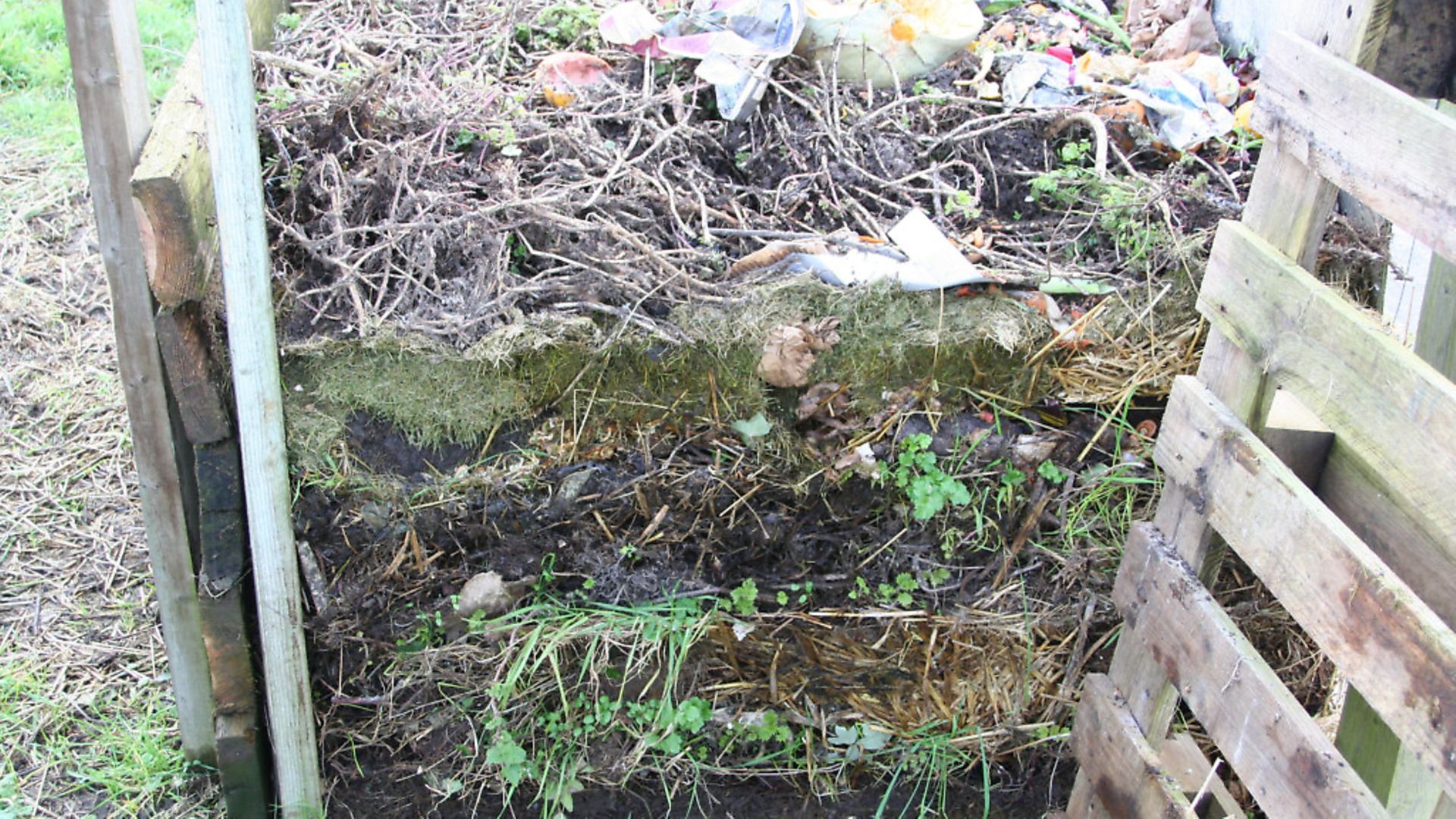 What makes the best compost?

All composts are good and all are a better option than filling a bed with soil, or with a mix of compost and soil. This was scientifically checked over two years and reported in a paper published in October 2018 in Urban Agriculture & Regional Food Systems.

My own studies show the value of animal manures, with the best results achieved when they are well decomposed – say two years old. One trial I ran compared growth of onions in different composts and they were much bigger when grown in old horse manure than in rather fresh green waste compost. However, the summer planting of beetroot (after the onions) saw equal harvests because the green waste compost had matured and was releasing its nutrients, which previously had been decomposing its woody fragments. 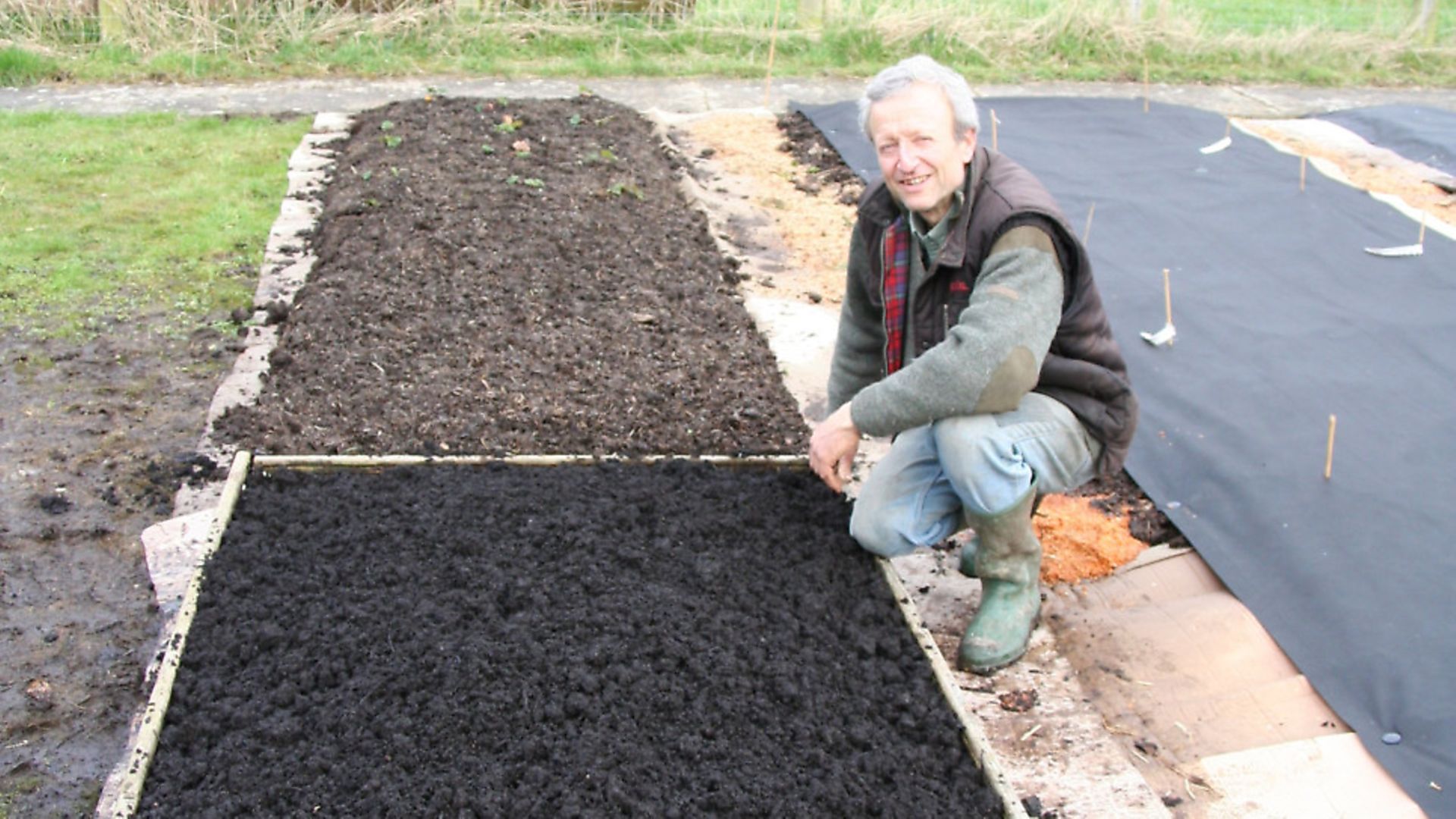 Adding weeds to the compost heap

Another confusion is the advice that roots of perennial weeds cannot be added to heaps “because they will regrow”. Well, they might if you tossed them on a heap and walked away for six months.

When I started to create a garden at Homeacres in December 2012, there were areas of rubbish that had to be cleared of roots of bindweed, nettles, docks, couch grass and dandelions. I added them to the compost heap, along with other wastes, and they all disappeared, even without much heat. The only regrowth was out of the heap’s pallet sides. Now I find it better to line the sides with cardboard or plywood.