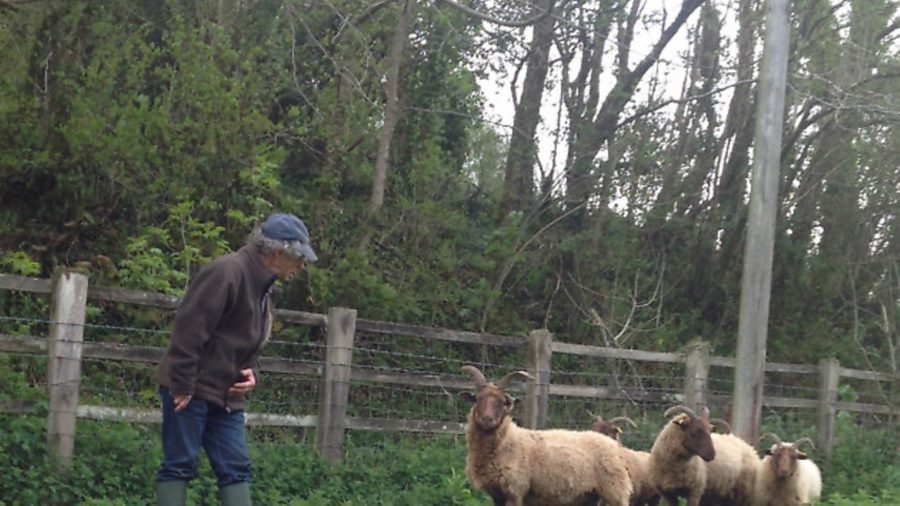 Not all smallholders keep animal for food. Debbie Kingsley talked to three vegetarian smallholders to find out more about the livestock they keep and why they keep them 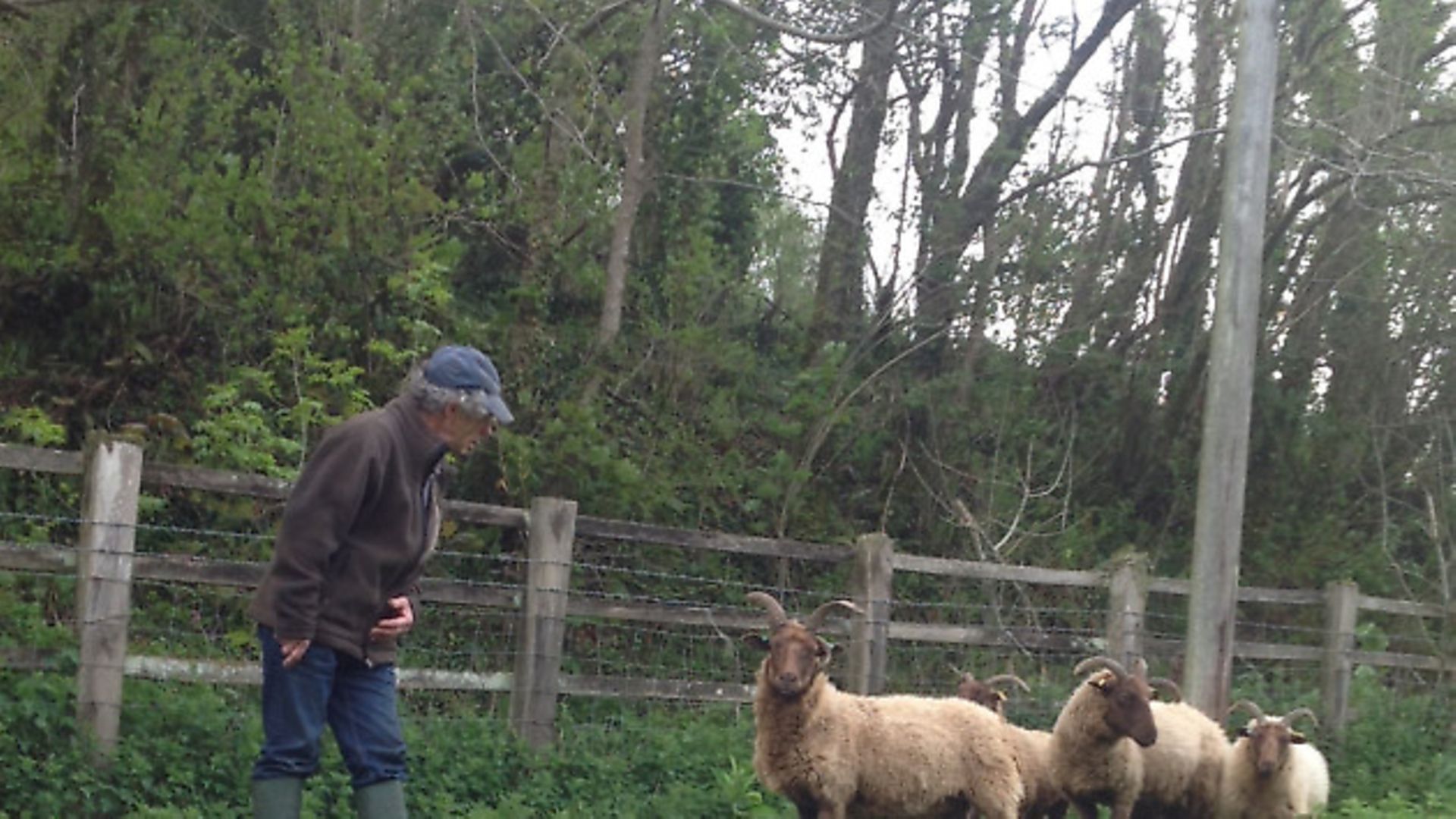 Sue says that she and her husband Mike are ‘accidental smallholders’.

“We bought an old Cornish barn conversion plus a few extra barns 20 years ago, and a few months later the previous owner knocked on the door and asked if we’d like to buy the field over the road. He’d initially kept it but it was too much for him running it from a distance. It was an offer we couldn’t refuse, so we bought the field and also rented some land behind our house. 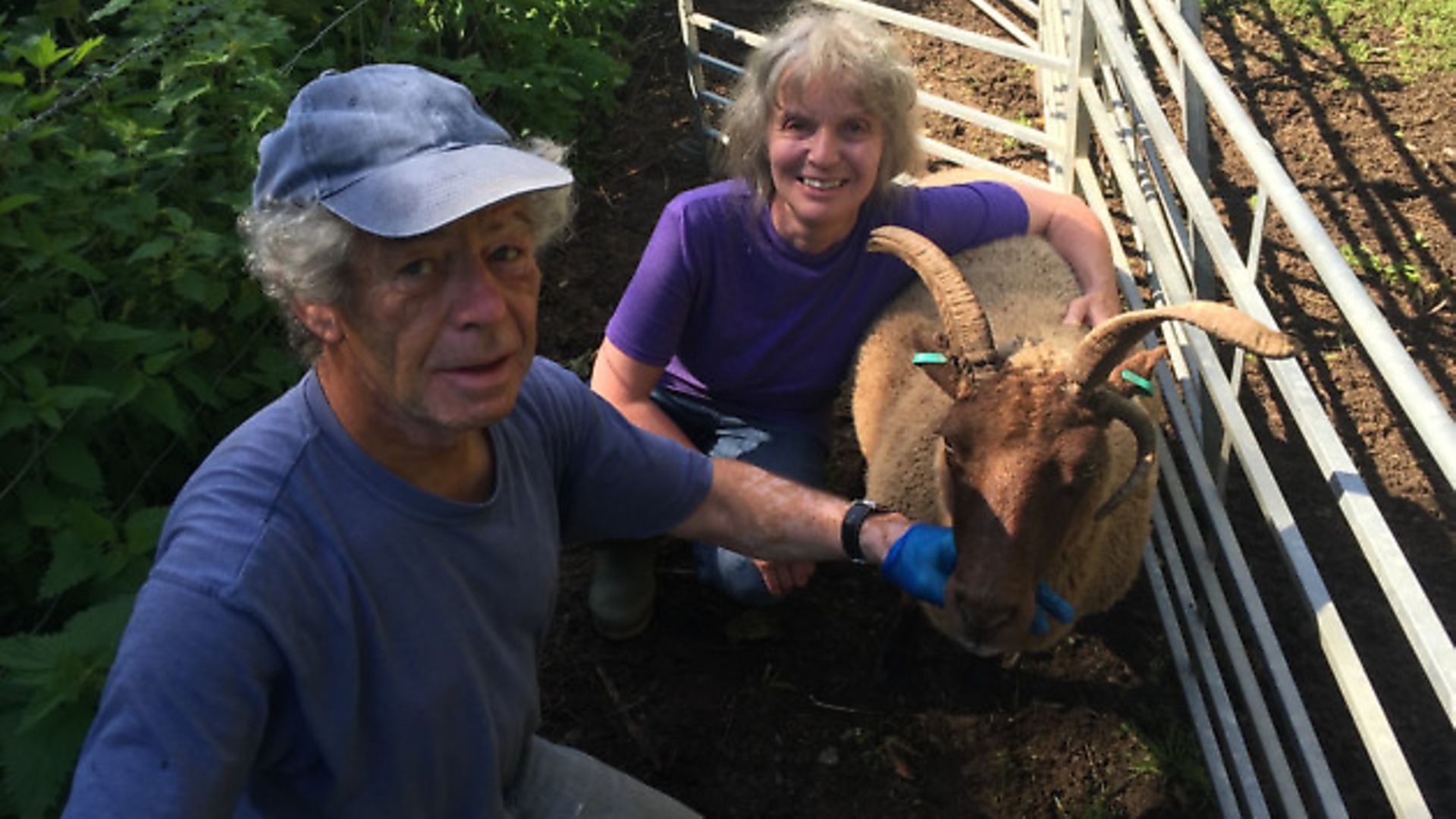 “To start with we kept our old pony plus its friend on the land, but when she died we needed other livestock to keep the field field-Iike. After much research we settled on Manx Loaghtan sheep, as they eat most things, and after attending Debbie’s smallholding course we took the plunge and bought our sheep. They are essentially lawnmowers and semi pets; they are tame but not cuddly. We lambed one year for the experience, which was good in itself but then, as vegetarians, we had the problem of what to do with the lambs. We didn’t want to send them to slaughter so we took some to a rare breed show and sale, naively thinking we could sell them to people wanting to preserve the breed; we soon learnt that the guy from the abattoir snaps up the cheap sheep. Our field then got a bit overcrowded, so we probably won’t lamb again and are now very clear that the reason we have sheep is to maintain our fields, to clear scrub and graze the Looe Valley. We don’t have fields to raise sheep for dinner.” 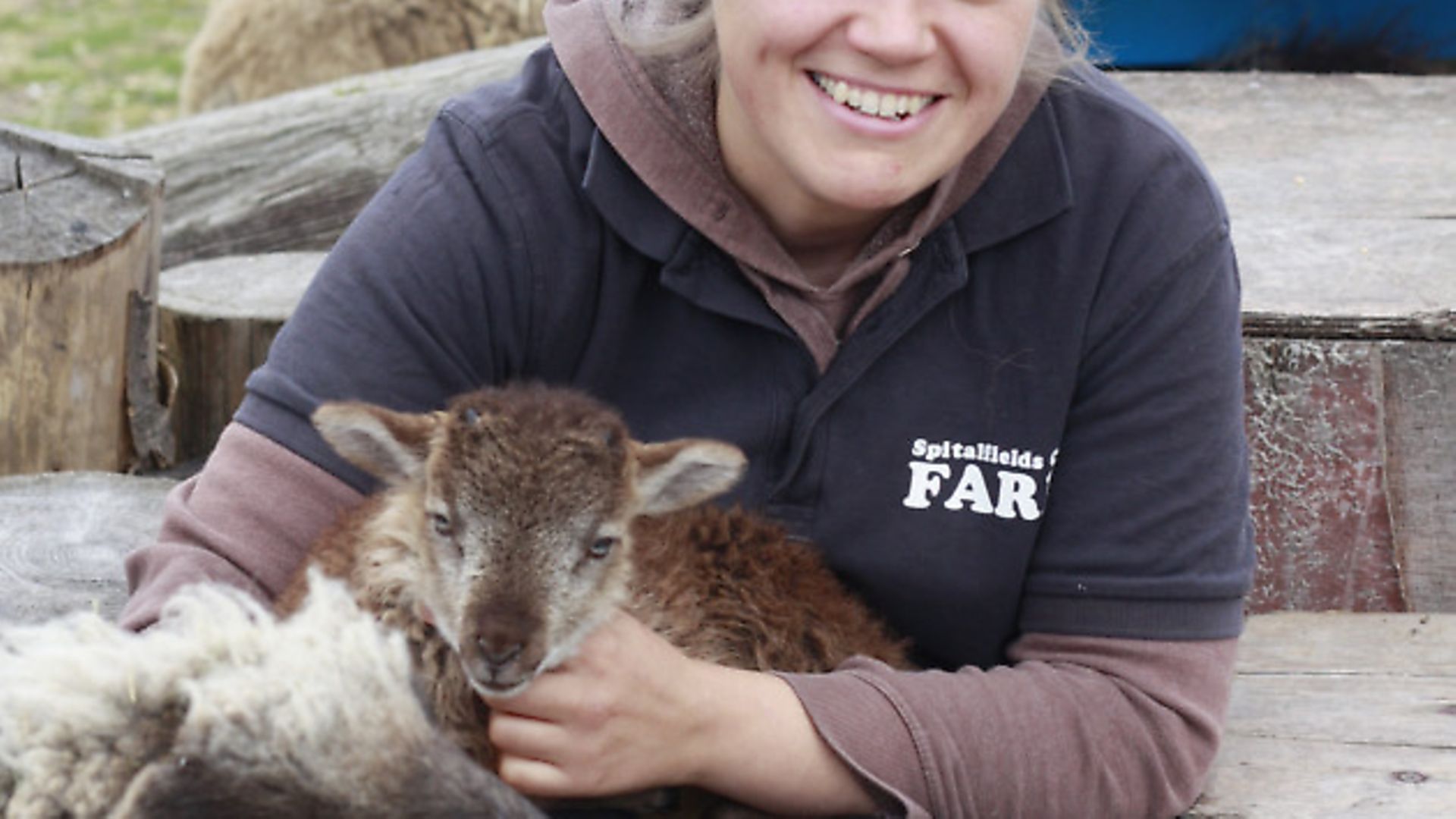 Jenny is the Livestock Manager for Spitalfields City Farm, the closest farm to the City of London. It was launched in 1978 as local people converted wasteland and a former railway depot into allotments. “With a long tradition in the East End of backyard farming it wasn’t long before chickens, rabbits, and geese appeared on the scene,” said Jenny. “Our grow-to-sell vegetable gardens are a big success, but the farm never developed a strong livestock breeding focus; the few excess animals may have been sold at market but this could never produce a sustainable income on such a small scale.

“The Farmyard Co-ordinators in the early 2000s agreed an animal policy that stipulated the focus of the farm would be as an educational resource teaching respect for animal life and explaining where food comes from, without breeding animals for consumption. In 2009 the farm became the first Rare Breed Survival Trust Approved City Farm. Today we are home to a mix of rare breed and rescue animals.

“Unlike a private smallholding, we are a charity that relies on donations to keep the farm open and free to visit. We sell eggs, wool, and surplus rare breed livestock to other breeders. A large part of the farmyard expenses are covered by our community outreach project, the Mobile Farm, taking animals out to local schools, events, film and photography projects for a fee. The donkeys are particularly popular at Easter and Christmas.

“Personally, I started volunteering at my local city farm when I was a teenager. Having focused my education on animal science I was offered a role at Spitalfields after university. Working on a community farm and having access to training has built my confidence and I’ve explored passions and ideas in a safe and supportive environment. 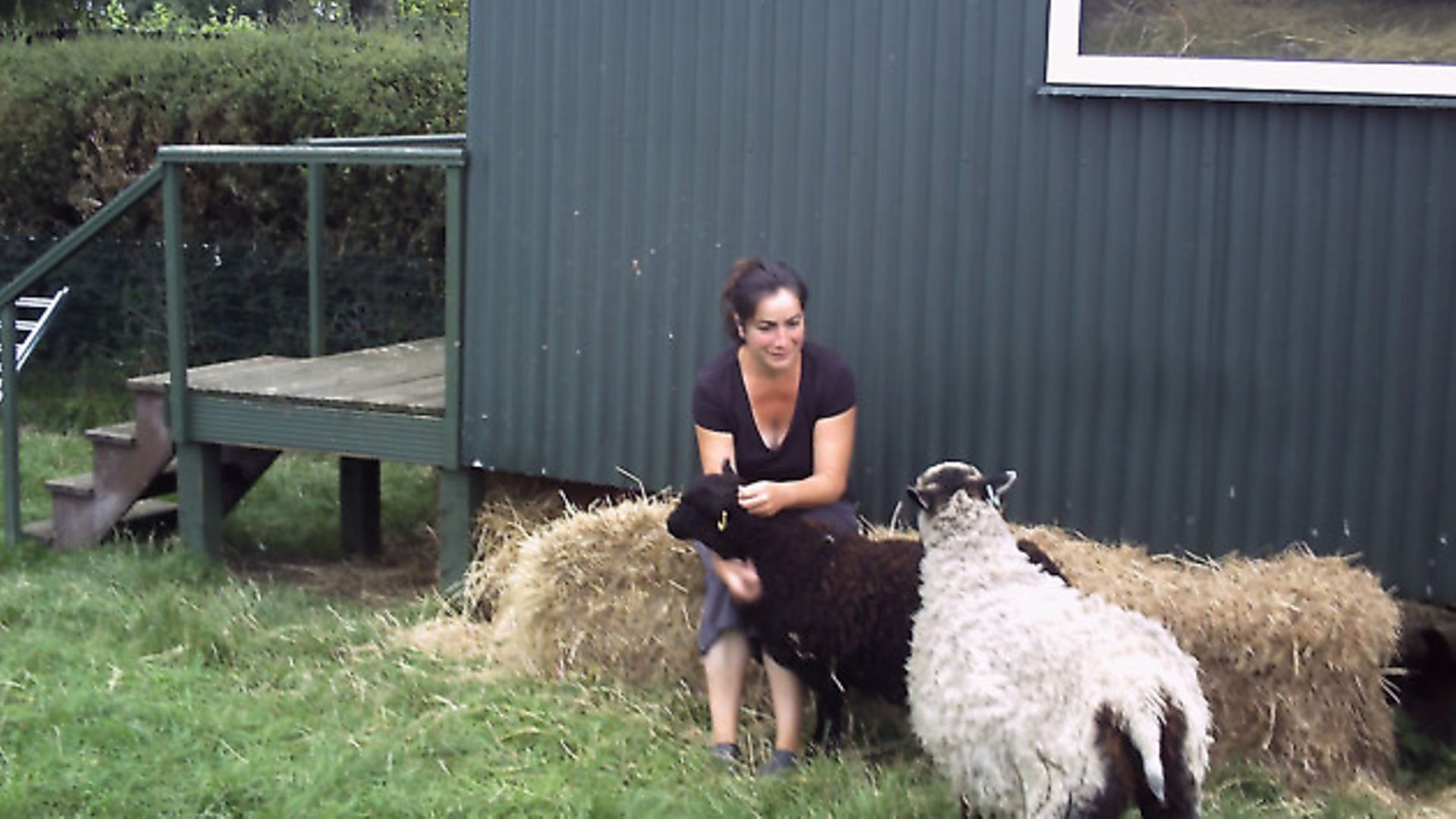 “The vision of me starting my own smallholding in the future is not entirely unrealistic now. Having only become a vegetarian in recent years, it feels like the organisation has had a big impact on me, pushing me to think about the alternative roles that animals can provide. Simply having iconic animals on Londoners’ doorstep enables us to support campaigns for high welfare farming. The past two years we have worked closely with Ahimsa Dairy Foundation, allowing us to foster cows that are part of a unique non-slaughter dairy in the UK.

“We have successfully piloted ‘Chickens on Tour’ as an alternative to incubation in schools. Three or four laying hens are set up in school for a half term allowing the whole school to take responsibility for their day-to-day care, feeding and cleaning and have the benefit of collecting fresh eggs on site. The feedback has been brilliant with schools linking up with one another, the chickens becoming a talking point between parents and children and the project has improved pupil attendance.

“Our biggest challenge is finding breeding rams and billies for hire and managing any resulting excess males. Ideally we try to source breeding homes but if not we occasionally find ourselves home to very friendly wethers. We have to remain aware that the farm has limited stocking space and some years we may not breed until homes are found. This can be disappointing for the public at spring time but brings home the message that our animals are not disposable.

“Managing an open farm comes with its own challenges but it is worth it for the moments when we find the animals have a therapeutic effect, particularly with special needs students. Working with named animals that are here for life provides them with a unique opportunity to build a lifetime bond with animals that may otherwise have been on their dinner plate without much thought. For future vegetarian smallholders I would say explore your limits, build connections with other smallholders in your area, think beyond what animals are historically used for and you may find a niche market for something special”. 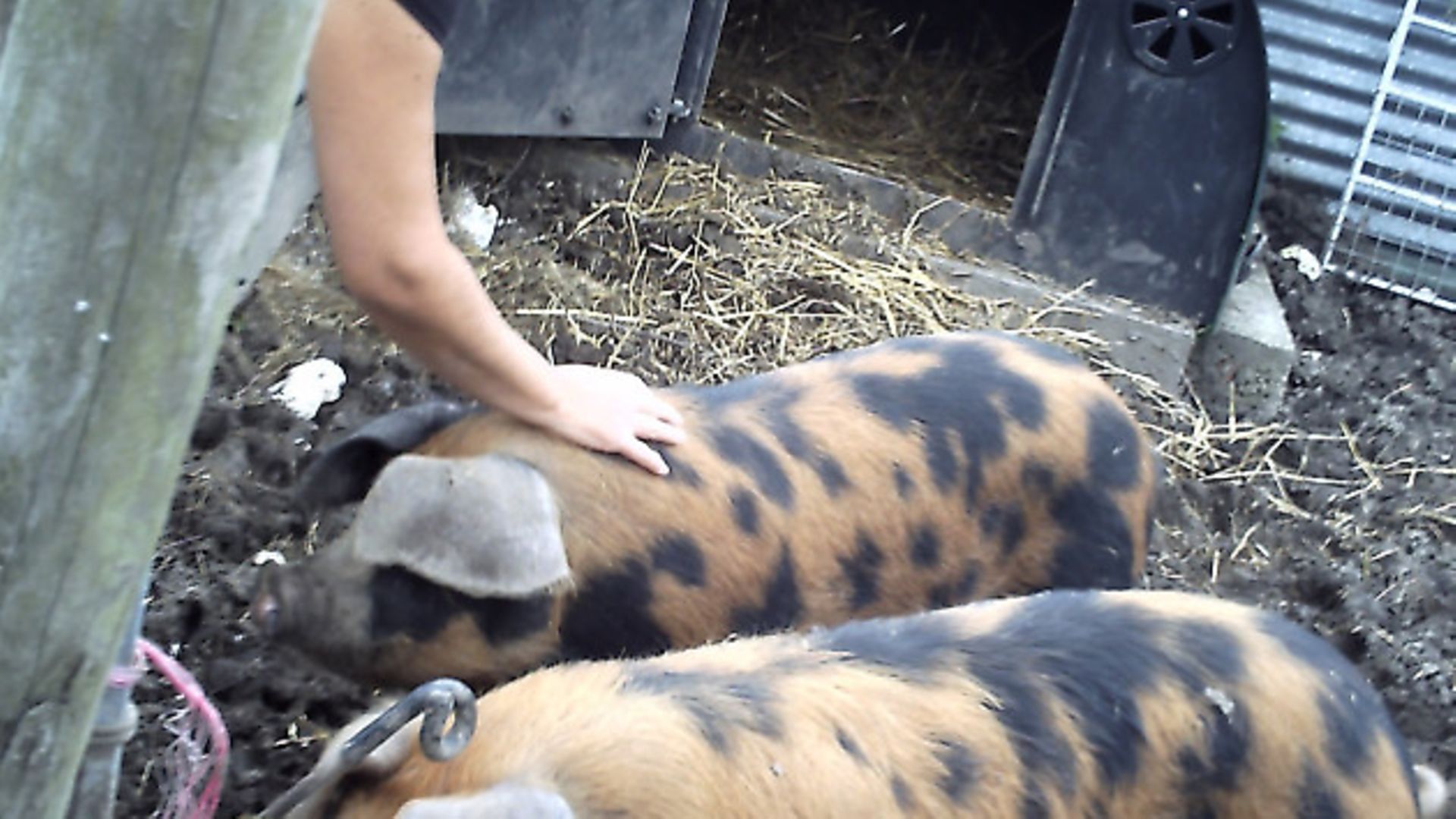 Tania runs a small B&B called The Paddocks, a smallholding with 7.5 acres in Melbury Abbas in North Dorset: “I keep chickens, ducks (Shetland, Runners and Khaki Campbell), guinea fowl, quail – well only three at the moment – Pilgrim and West of England geese, and Shetland sheep, seven girls and one castrated boy (not that he knows it) and my first lambs, twin girls and a boy. I am looking at having a couple of pigs this year for the first time and keep looking at llamas; I would like them for guarding and for interest.

“I sell my eggs which pays for poultry feed and last year sold my excess fruit, veg and jam. This did well and so this year I plan to produce more. I have planted a small orchard with a variety of fruit trees in a small part of the field along with a few in the garden and have my first cider apple tree.

“I have always loved the countryside and spent lots of holidays down in Dorset as my Nan lived down there (I was born in Poole but moved to London when I was two). I didn’t really have pets growing up so maybe that is where the animal part grows from and for a while had wanted to have a B&B somewhere in the country. I was made redundant from my job with De Beers and that gave me the chance to go on courses. I did get another job in the diamond industry but by then the smallholding seed had grown. I put my house up for sale, moved back in with my parents, got my first chickens and ducks and started looking for a place to buy.”

• I asked Tania if being vegetarian has had a particular impact on the type of smallholding she runs. “I don’t think it has stopped me having any particular animal. I want to try pigs and they would be for the freezer. I’m not sure how well I will do taking them for slaughter, but I’ll find out. Although I wouldn’t eat the meat, it will be used for the B&B as well as friends and family.

“Most of my animals are treated a little more like pets than working animals; at one time any little thing wrong with them and off to the vets they went! I don’t think I could end one of my birds’ lives even though I brought a dispatcher when I first set up. I am treating them more myself if they become ill and I happily tip a chicken up if it has sour crop. The time my duck had angel wing I strapped it down and sorted it out and I can check out limps in ducks and geese which helps when vet charges are so expensive.

“I now believe that all the animals need to contribute in some way to their upkeep and I am much happier selling off animals when I need to; at one time I would have kept the lot. The biggest challenge for me is having any animal put down. This is even worse when they are a favourite.

“I love spending time with the animals. The best time is sitting out on a nice sunny day and them coming up to you because they want to. Billy the cockerel often jumps up for a cuddle as do lots of the chickens. It’s great when the guineas come over, preen themselves and you too, and of course the sheep – luckily I seem to have lots of friendly animals. Watching my first batch of chicken, ducks, guineas and quail eggs hatch and this year seeing all my first lambs being born was wonderful and hopefully I’ll soon have my first goslings. I love the great feedback and loyalty from people who buy our eggs. I can’t tell the difference (I guess I am just used to them) but when someone tells you they are the best they’ve had, we must be doing something right. In the future I never want to look back and regret not going for it; not everything is perfect but I am glad I took the plunge. It takes time to adjust but there are always great days to make up for any less than perfect ones. Think of yourself as a custodian of your land and leave it in better shape than you found it.