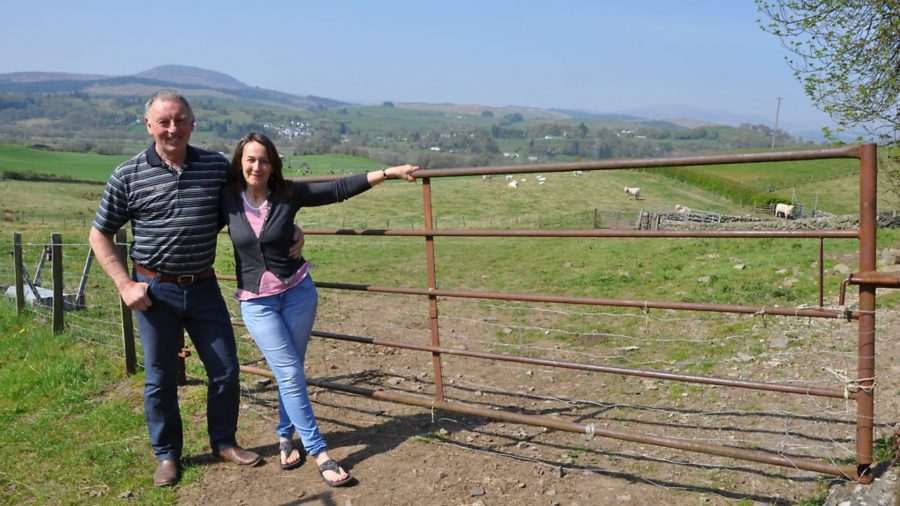 After meeting five years ago, Donald Hendry and Linda McFadzean now breed Highland cattle, as well as rare Whitebred Shorthorns. Julie Harding visits them on their scenic holding in Dumfries & Galloway to find out about their venture 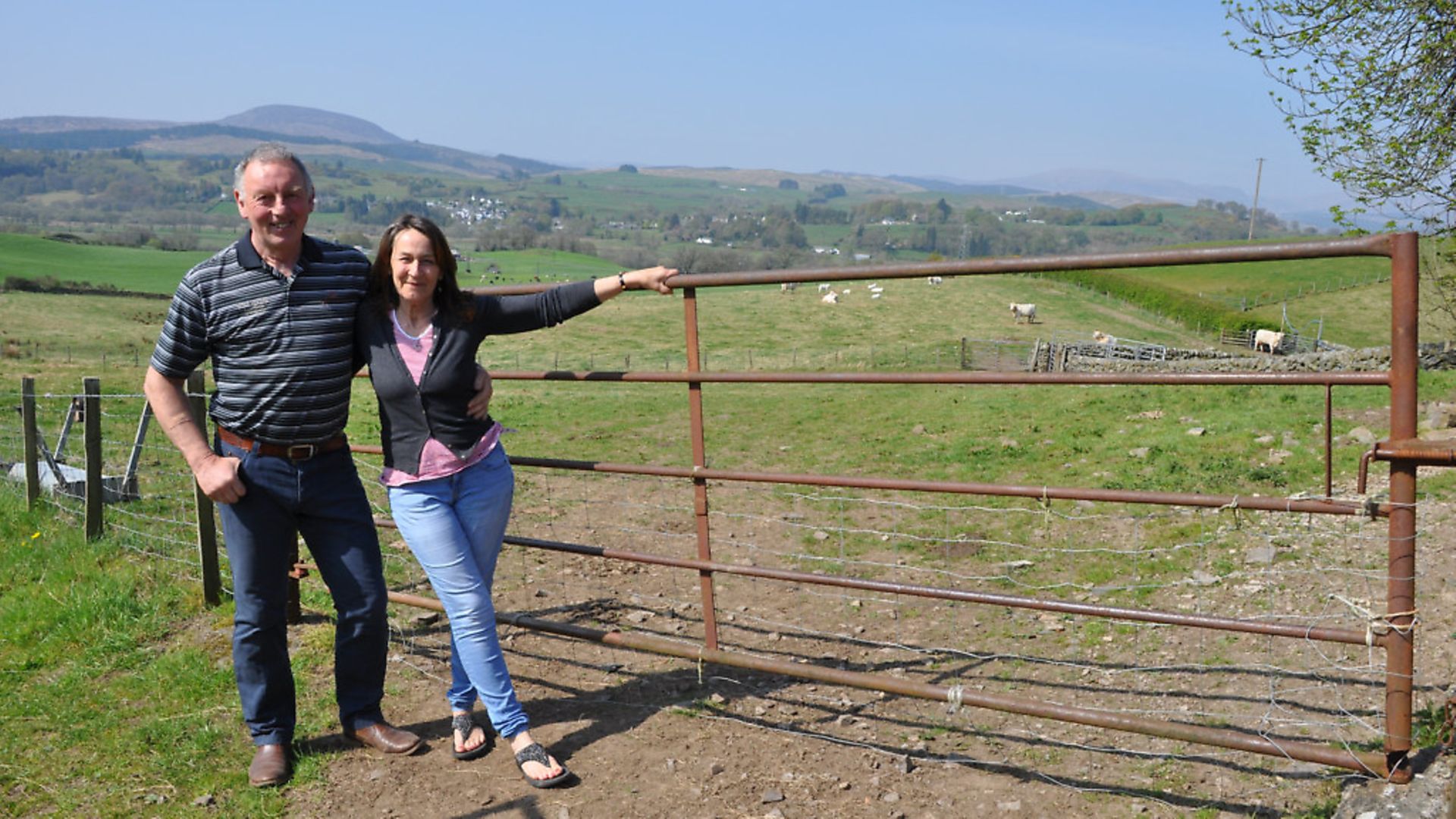 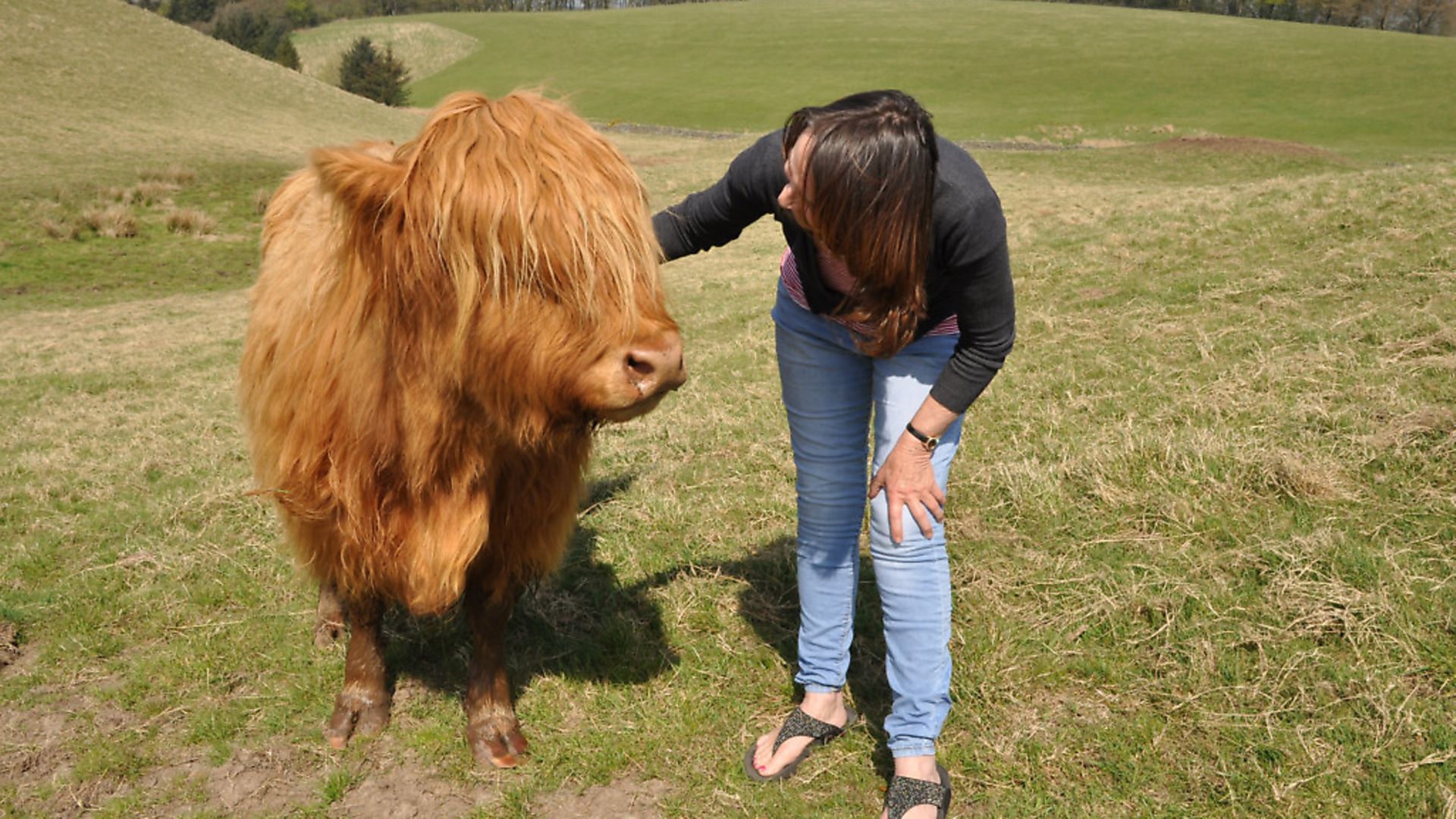 On a clear day you can see for 40 miles from Summerhill Farm. The land rises and falls until it meets today’s cloud-free azure sky. This is the kind of place where you want to stop and stare. God’s own country. A little less dramatic maybe than Ireland’s Wicklow Mountains, for which Edward du Bois is said to have first coined the phrase, but awe-inspiring nonetheless.

With vistas stretching all the way to south Ayrshire, the small herds of Highland cattle and Whitebred Shorthorns who graze the undulating fields that encircle the three-bedroom farmhouse are blessed with a more picturesque home than most. They probably don’t know how lucky they are, both in terms of the scenery that is good for the soul in this Stewartry area of Dumfries & Galloway, but also because they have owners who care deeply about heritage and rare breeds, for Highland Cattle once stared extinction in the face (in the 1970s) and Whitebred Shorthorns are still on the margins of danger. They are considered ‘vulnerable’ by the Rare Breeds Survival Trust (RBST), with, it is said, only around 250 breeding females in existence.

Their owners, Donald Hendry and Linda McFadzean, who moved into this holding last August, met on Muddy Matches five years ago. A mutual lifelong love of farming and livestock caused their first ‘date’ in a Dobbies Garden Centre café to overrun far beyond the conventional timeframe of most initial romantic meetings — the free-flowing conversation with not a single awkward moment lasted for three hours. There was a lot of catching up to do, for, extraordinarily, as teenagers, Donald and Linda were neighbours on adjoining farms, although fate failed to grant them even a brief introduction at this point. 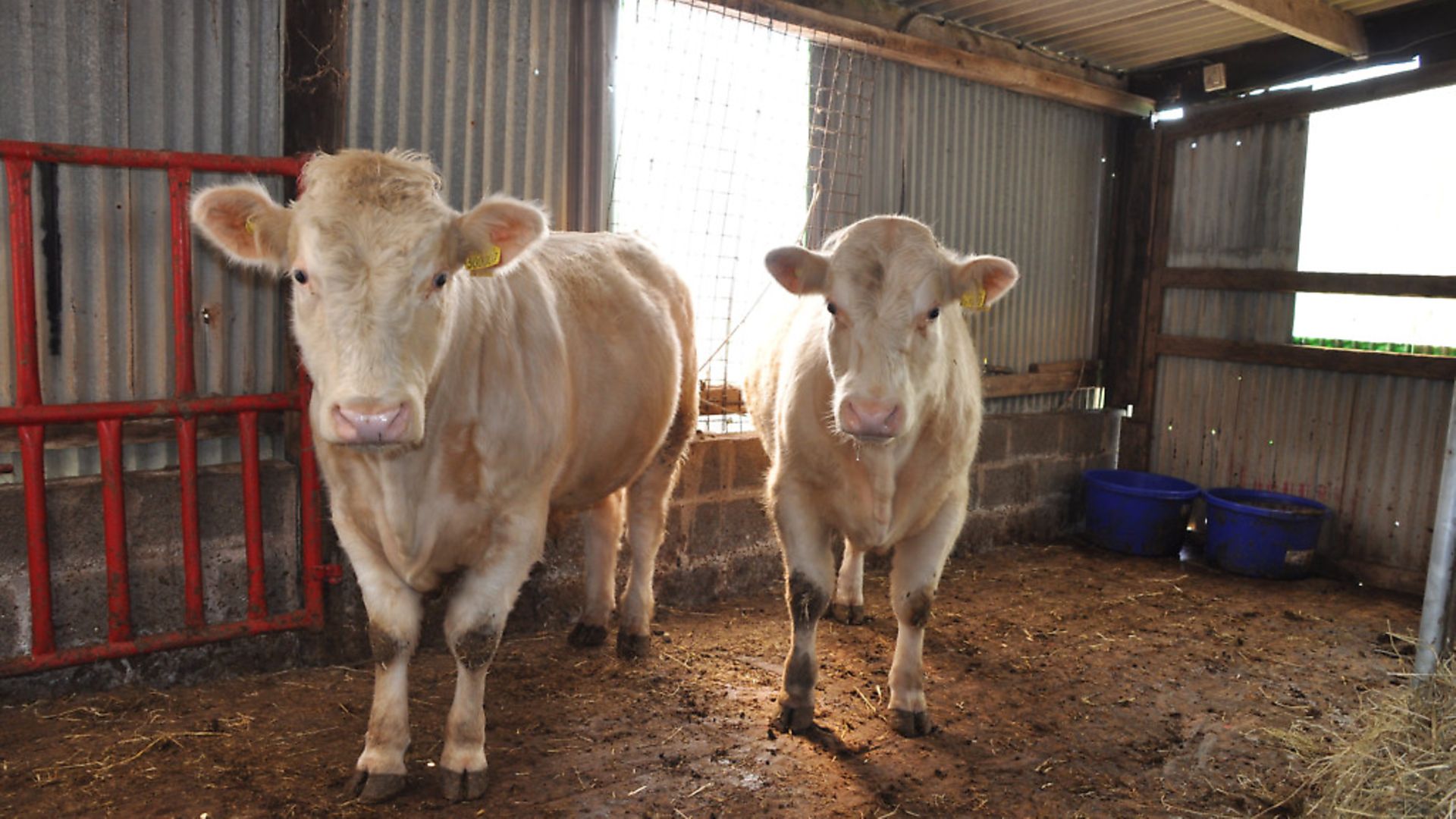 “I was a wee shy boy who was always hiding,” Donald laughs. 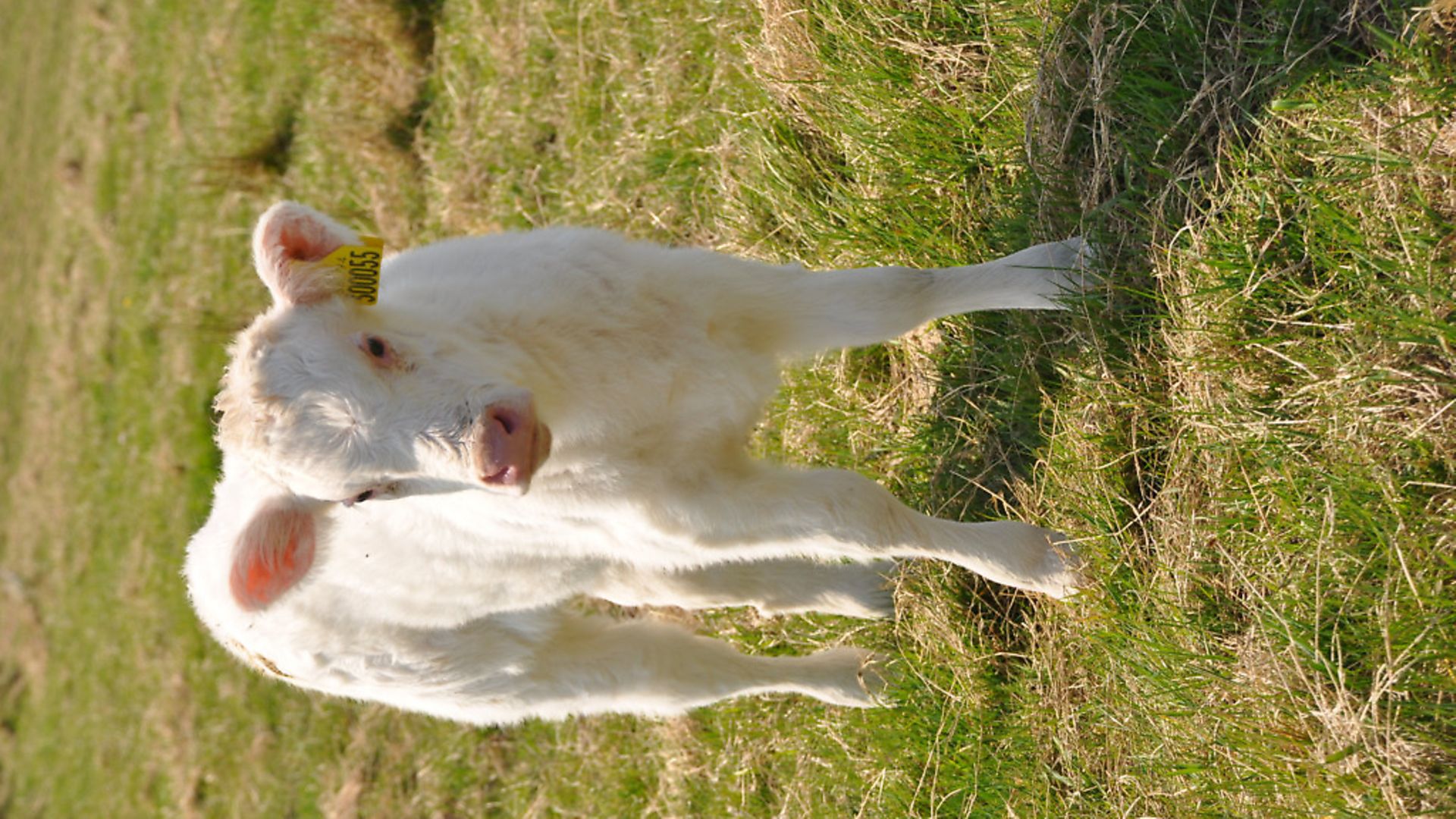 The Whitebred Shorthorns are really his and the Highlands hers. Donald leads the way into a large barn where there are four yearling bulls who are reluctant to come forward to greet a stranger (me), although courage comes to one after several minutes and a pink nose eventually appears at close quarters.

Two of these are on the market, while Donald will use the other two (who are sired by old AI bulls) this summer and sell them afterwards. There will be no shortage of takers.

“They make wonderful smallholders’ cattle because they’re not that big,” says Donald, a former chairman of the Whitebred Shorthorn Association. “This one’s called Ben Ledi Barney Rubble as he was born among the rubble in a derelict barn on the property during a blizzard on 4 April 2018.” Donald rubs the yearling bull’s soft hair which is the colour of latte froth.

“Barney’s father, Murtholm Premier, died in 1996. The RBST has a few straws of semen available and so do I. I’m the only breeder to register calves from the old bulls Murtholm Premier [1995] and Wolfhills Chieftain in the last five years. I’ve also got four calves by him — including that one at the back.” Donald points to the least brave of the quartet. “Wolfhills Chieftain died in 1981. The Scottish Milk Marketing board bought semen from him and I’ve got six straws.” 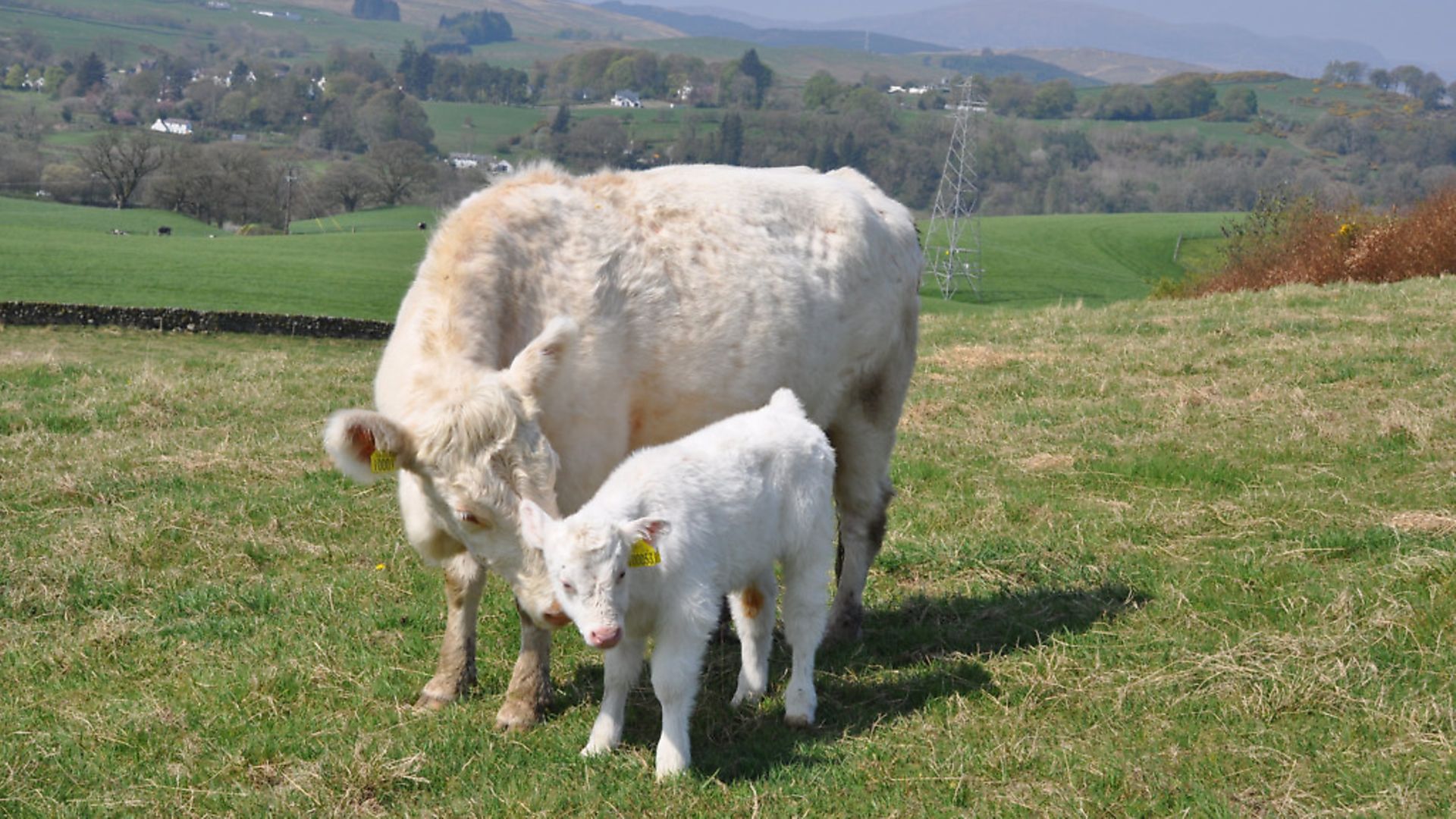 Outside in the unseasonably balmy Scottish air, Donald walks among his Whitebred Shorthorn cows and calves in a field boasting those breathtaking views towards south Ayrshire. Their cream colour ensures that they stand out against nature’s green backdrop. They wouldn’t be more prominent if they were wearing high vis.

“This one is Lochdochart Snowfall 19th,” says Donald, creeping gingerly towards a specific cow so as not to spook her. “She’s the mother of Barney Rubble. She’s one of my originals and at 11 is an old cow now. We’ll keep her and she’ll die on the place.”

Whitebred Shorthorns tend to be fertile and docile — two of the reasons why Donald likes them so much. They are also known for their longevity and for being milky, maternal mothers.

“They are a very commercially viable breed, but the average 40-year-old farmer doesn’t even know that they exist. Everyone who buys one becomes a fan.

“When the market wanted size and conformation,” continues Donald, referring to the rise in popularity of the Continentals, “they forgot maternal traits and ended up with cows that cost a lot in vets’ bills, who were greedy and hungry and needed cereals. We produce an animal that is grass based other than when they are calving, when we give ours magnesium cobs. Six weeks after calving they get cereals to get them back into condition. They have a calf every year.”

Next stop is the field of Highlands. They first arrived here last September, but have a look of total contentment as though they have been on this sandy loam soil for years. These may lack the iconic upstanding motorcycle handlebar horns (Donald and Linda dehorn theirs as young calves using anaesthetic), but the lengthy body hair and overgrown facial fringe make them unmistakable members of their breed.

Here we have black full sisters Orca and Unicorn, the dun Katrine Morag and the yellow Katrine Lisa.

“She’s a lovely quiet cow,” beams Linda, going in for a rub of Lisa. All the cows were sired by Loachan Dubh of Knockenden, who was old by the time Donald bought him, but he lived into his teens. The current calves are by Katrine King, a Whitebred Shorthorn bull. One such calf is Romeo, Lisa’s son.

“Romeo will be castrated because he’s no use for breeding,” Donald explains. “He’s got hybrid vigour, but we won’t use him as a cross-bred bull. He’ll end up as beef. We’ve killed our own in the past and their beef is lovely, being nicely marbelled. But these are Linda’s cows and I believe she may think differently….” His words tail off as he glances at his fiancée.

“Yes, Romeo’s a bit of a favourite,” nods Linda.

Just as their Whitebred Shorthorns are snapped up when they come on the market, the same is true of Donald and Linda’s Highland cows’ first offspring.

“There’s a shortage of first crossings and they all go for breeding,” says Donald.

Donald knows a thing or two about Highland cattle. He was

the driving force behind the Forestry Commission Scotland’s Loch Katrine project, which involved introducing the

breed in the Trossachs on 10,000ha of overgrown Scottish Water land in order to revive ancient forestry management techniques. In that first year Donald, then the Commission’s agricultural advisor for Scotland, bought in 80 Highlands, with numbers eventually growing to 100.

“The Forestry Commission came in for a lot of criticism for getting into an agriculture project, but I wanted it to be commercially viable so we looked at crossing the Highlands to produce a suckler cow for use in general agriculture. We wanted an easy calver with a star quality calf with a nod back to native breeds. So I bought five Whitebred Shorthorn bulls in 2008 and was really impressed with them.”

Eventually, Donald retired and the project came to an end, the herd sold on privately.

“A lot of people were upset about the scheme ending, especially the buyers of the cross-breds whose sources were coming to an end,” he says.

Back in the farmhouse dining room, with a freshly brewed cafetière of coffee placed on the large oak table, as well as a plateful of Linda’s home-made biscuits, Linda and Donald relate the journey that brought them to Summerhill. At the same time as that fateful meeting in the Dobbies Garden Centre café, she was living in a cottage in Turnberry, while he had a flat in Kippen in Stirlingshire. They pooled resources and purchased a farm in Cumbernauld.

“We had neighbours who weren’t used to cows and they complained about the muck, so we sold up, moved back to my cottage and bought land at Turnberry,” says Linda. “We were going to build our own house, but we’re so old now that we decided we’d be in a box by the time we’d finished.” She laughs.

By the time they chanced upon Summerhill, consisting of a granite house mainly built in the 1850s and boasting 38ha of land, they had been farm hunting for three years.

“It was on the market during bad weather. We looked in the windows to an empty house, drove away and were straight on the phone to our solicitor, instructing them to put in an offer. Properties are cheap around here. It’s called the hidden gem of Scotland. We feel so lucky to have been able to buy this place. We think we’re in paradise. There’s not a lot of rain and you can’t even hear any traffic.”

There is, however, no central heating; a bannister that leads to the downstairs toilet is held up by cable ties; and the couple feels that they take their life in their hands every time they use the gas cooker that sits next to the Rayburn in the kitchen. There is clearly a lot of work to be done.

“We want to extend the house to capture the views,” says Donald. “The priority is to get the house right while we’re still fit. The fertility of the soil is also important to us. We don’t want to use a lot of nitrogen, but will lime it to keep it in good heart.”

“I’m trying to develop the garden, but all the digging is killing me,” says Linda. “You go down 6in and hit rock. But I’m planting shrubs and I want to grow vegetables as well, plus we both love trees.”

For anyone potentially interested in Summerhill Farm, it doesn’t sound like Donald and Linda will be selling up any time soon.

Head: Medium length with a wide muzzle and bold eyes.

The origins of the Whitebred Shorthorn are a little vague, but it is thought that it was originally derived from the Cumberland Shorthorn. The beef breed was first noticed in the late 19th century and at that point was called the Cumberland White. It was popular with crofters.

The Whitebred Shorthorn is bred mainly in the border counties of England and Scotland and the males are generally used as crossing bulls, often with a Galloway or Highland cow. A crossing with a black Galloway will form a Blue Grey.

The Whitebred Shorthorn Association was set up in 1962, and the breed remained popular until the rise of the Continentals, which caused an almost catastrophic decline of these easily managed creatures.