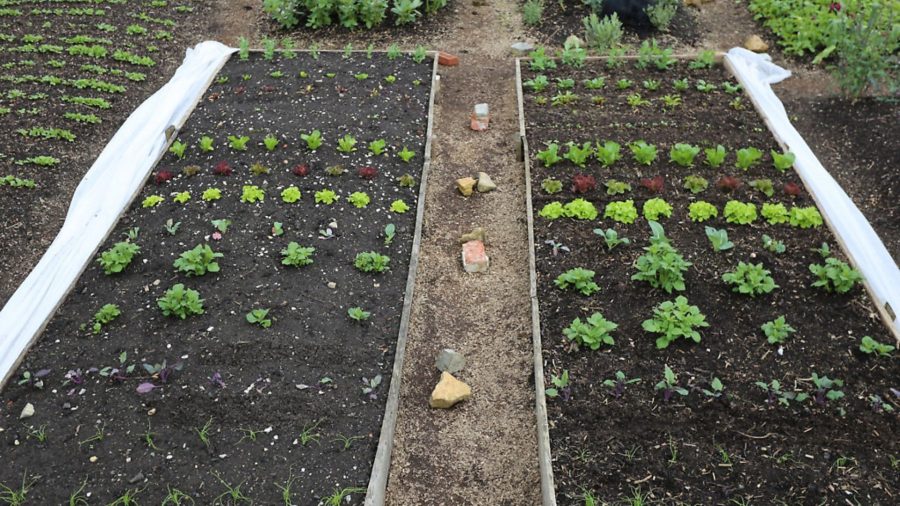 Charles Dowding thinks that his no dig approach to growing veg is effective, and thanks to his no dig beds at Homeacres, he can prove it 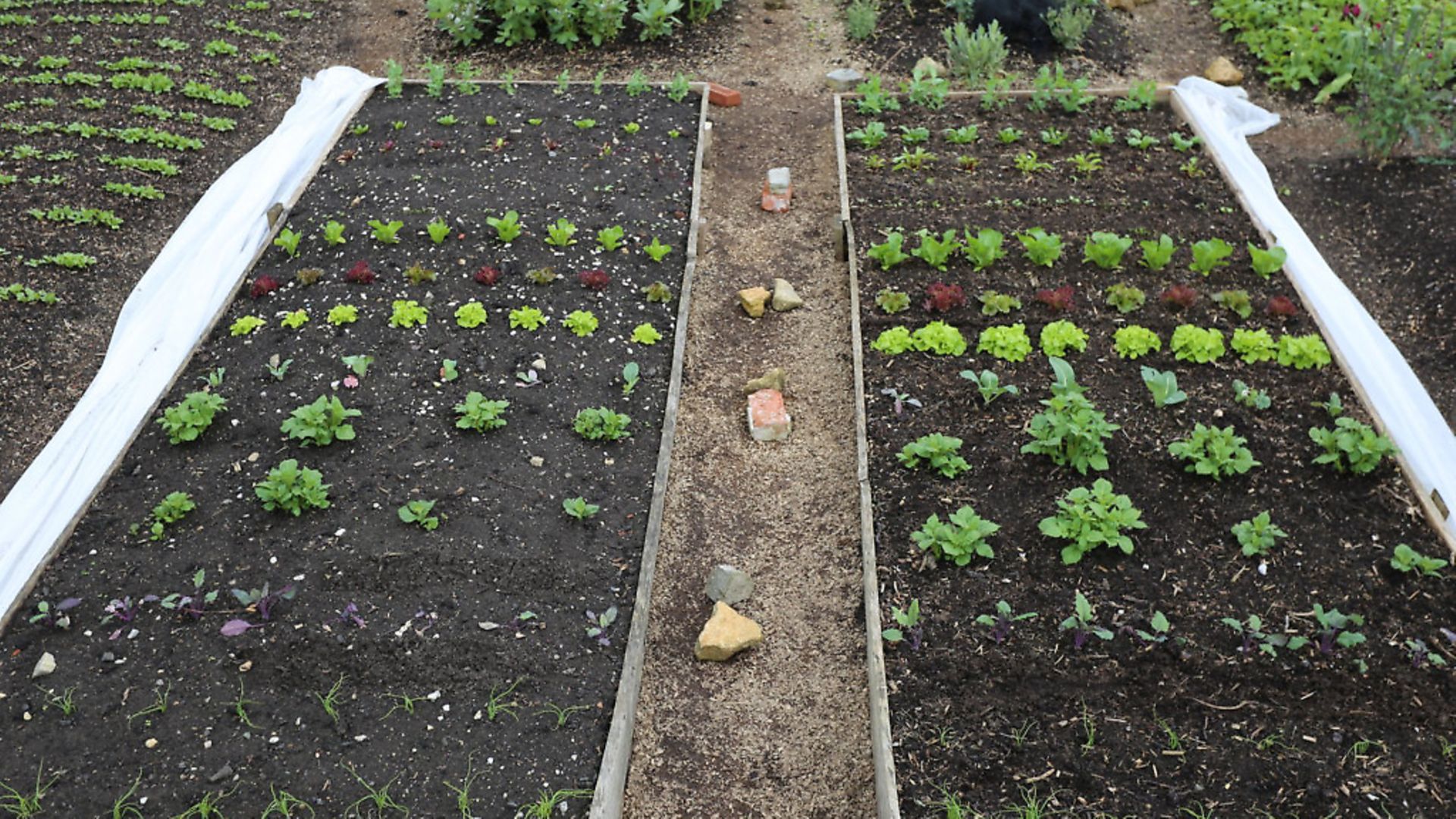 I look for methods that have a clear reason behind them and work. From my experience, that rules out an impressive amount of common “good practice” which actually does not stand up to scrutiny or yield the claimed results.

This theme runs though many activities besides gardening and since it is December let us mention baking. I make sourdough rye bread, acclaimed for its flavour and a relative lightness of 100% rye loaves. The secret? No knead.

Even though most recipes emphasise the importance of kneading, I simply stir vigorously with a wooden spoon and dollop the damp dough into tins. Much time is saved, more bread is enjoyed and yet many people have no idea that this is possible.

Gardening is choc-full of myths and misunderstandings and most of them result in unnecessary time wasted. ‘Hardening off’ is an example, with the in-and-out rituals one often sees advised that take up so many hours. I just take plants from the greenhouse and plant them outside, plus, in cold weather, I lay a fleece over for two to four weeks, depending on the season. 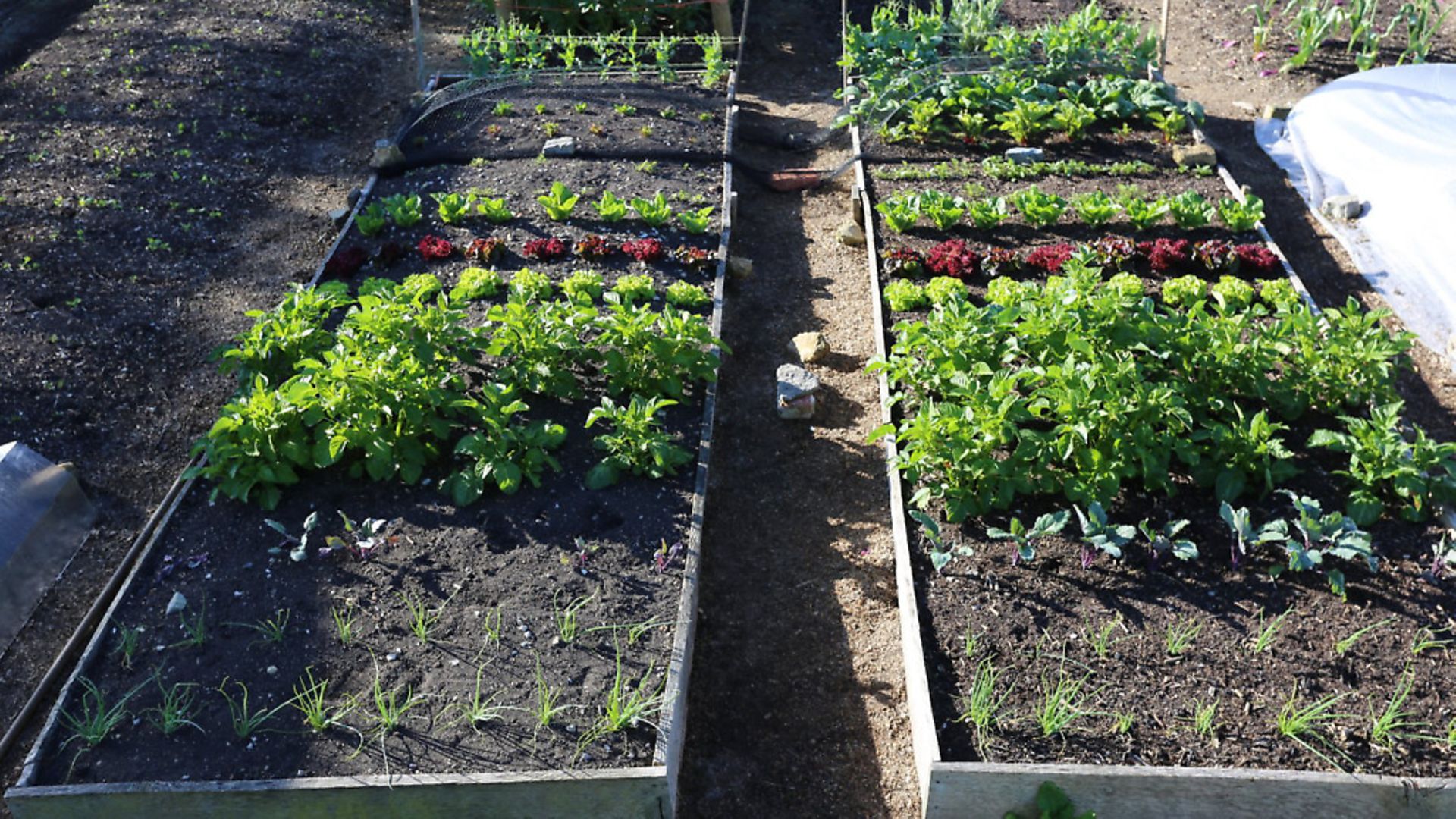 Let us look at more time-saving methods, with some explanation of my two Homeacres beds to compare growth in dug and undug soil. They are both 1.5x5m and are finishing their sixth year of cropping: their growth differences offer new insights every year and 2018 has been exceptional for this.

No dig was until recently seen as a lazy approach and not doing a proper job. Most gardening articles at this time of year feature a routine photos of fork and spade, man digging and advice to dig over, etc. At least the digging ritual affords a photo opportunity – but how to show no dig?

Recent changes in attitude come from the emerging knowledge about soil biology, such as mycorrhizal fungi. Understandings of the wood wide web in soil contradict many traditional views about soil structure, drainage, pests and how plants feed. Soil cultivation has the downside of damaging fungal networks and other soil organisms – and the evidence of growth on my two beds reflects this. 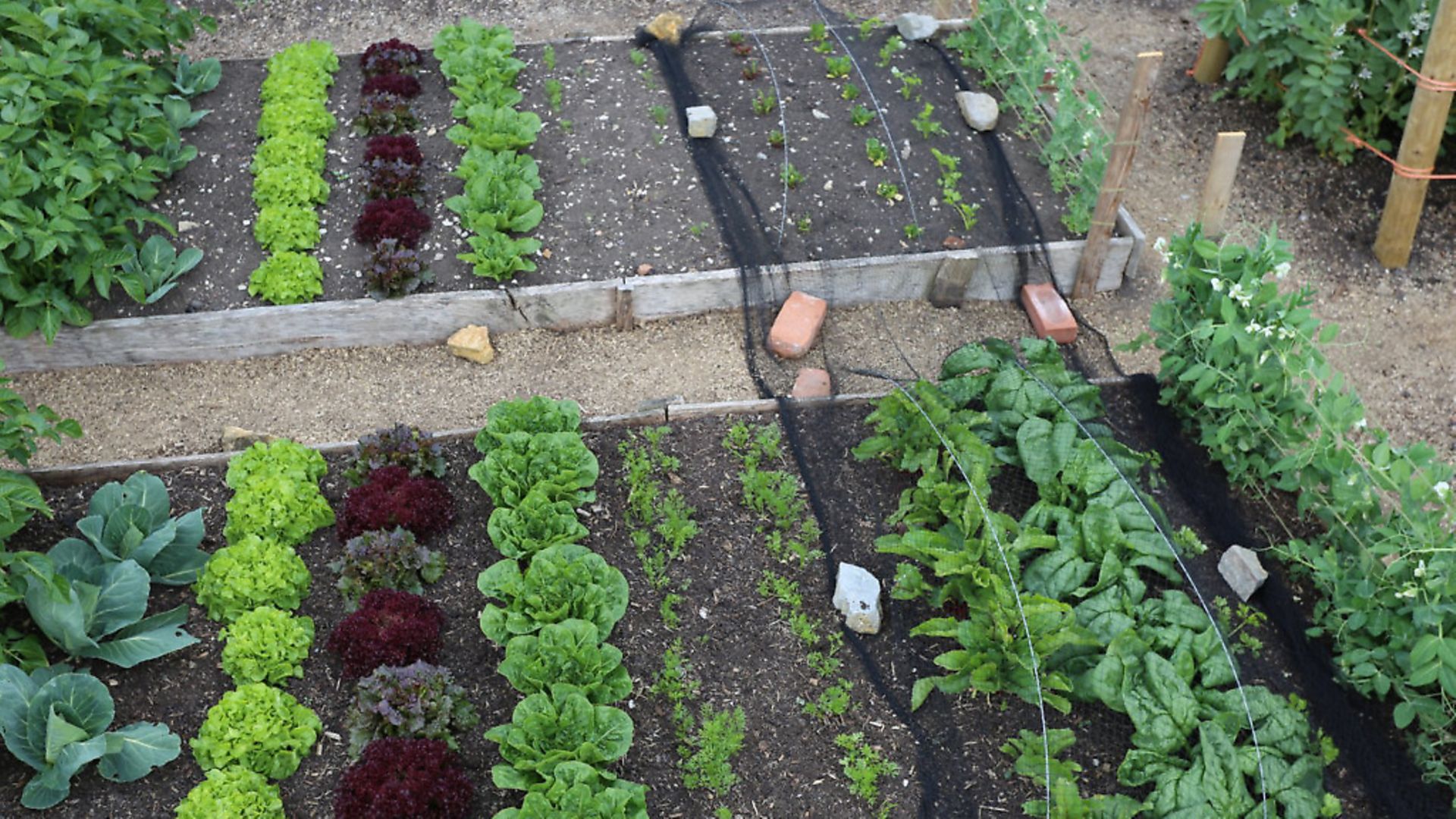 In spring 2018 my dig/no dig comparison of two beds of the same size, with the same compost saw the bed which I dig every December begin woefully. Its poor growth in spring suggests that soil structure is damaged rather than improved by digging. Plants on the dig bed struggled to make progress during April’s cold weather compared to the easy growth of all vegetables on the no dig bed.

Yet weeds grew more vigorously in the dug bed. Clean compost on the no dig bed (horse manure from a hotbed) meant that almost no weeding was needed.

This spring as April’s dull misery transformed to a magnificent May, the dig bed’s plants grew noticeably more slowly in the ensuing dry weather compared to the same vegetables on no dig. This was especially the case with peas, spinach, beetroot, carrots, cabbage and kohlrabi.

I notice how brassicas are generally stronger on no dig, yet most writings suggest that they do not use mycorrhizal association to grow. However, the brassica harvests to the end of October 2018 are 1.99kg dig, versus 3.95kg no dig.

Potatoes provided relief for the dig bed and yielded well. The no dig potatoes were good, too, but the difference was 16%.

By October, the dig plants were mostly the equivalent of those on the no dig bed, although even then there were dramatic exceptions. The dig bed celery was pale and small and there were stunted carrots with slightly more root fly compared to no dig. Harvests by late October on the dig bed were 62.5kg, and on the no dig bed 83.7kg.

The dig bed needed two hours extra work for its digging and a half hour of extra weeding. When watering, it needed more time because the water pans on its surface and then runs off (the compost is dug in), compared to rapid infiltration on the no dig bed. This has implications for erosion and flooding after soil cultivation. 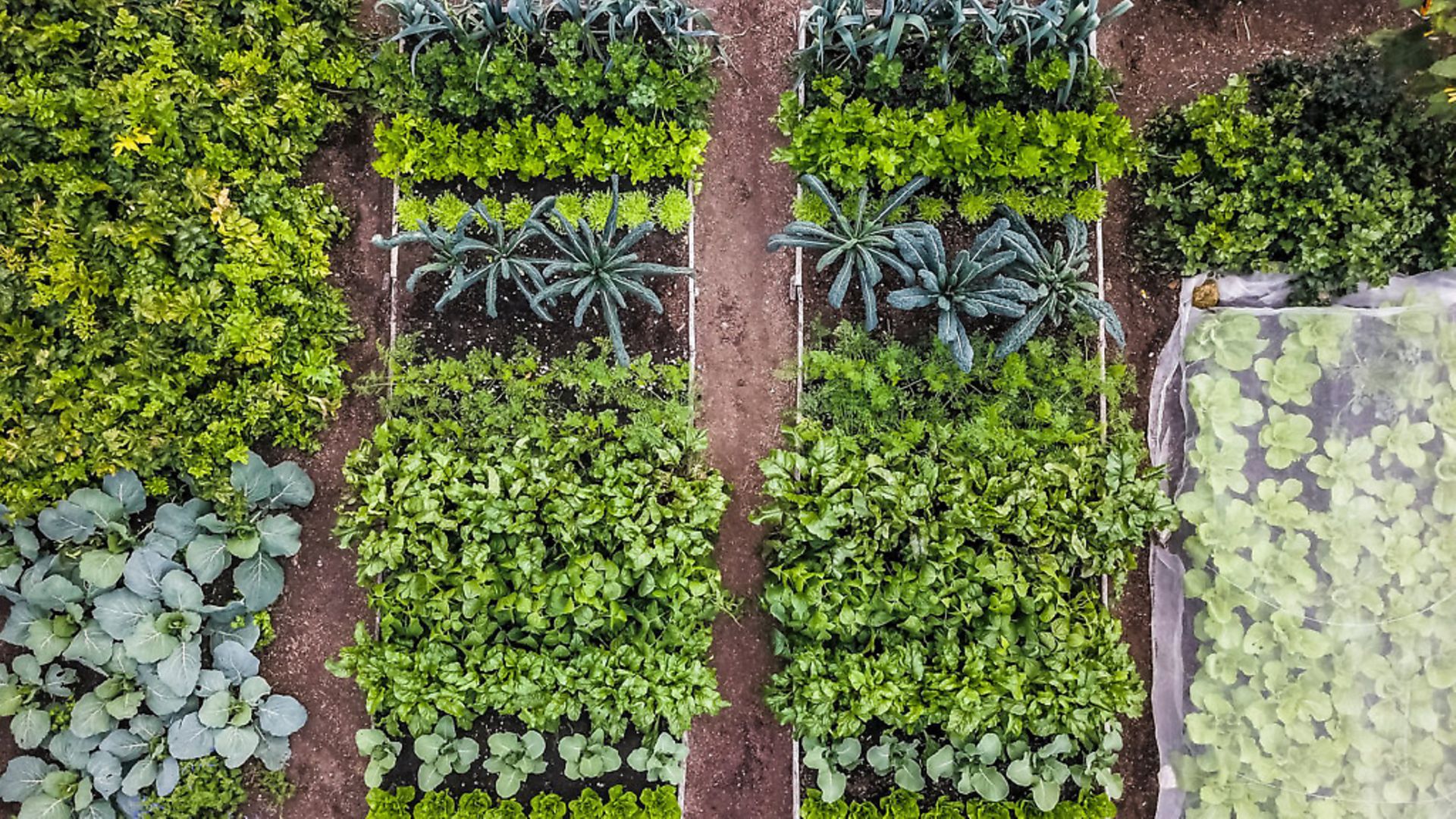 Pest damage is reduced with no dig

Two rows of emerging carrots on both beds became one-and-a-half on the dig bed by late April due to slug damage. On no dig, the carrots all survived.

I am tired of hearing the supposed justification for digging, that birds eat pests. In this case, it was the other way around, with more pest damage after digging. Moreover, the reasons for digging include no mention of how many worms and other beneficial soil inhabitants are damaged.

For 26 years, they had attempted to clear a border of Oxlis tuberosae (a weed with numerous small tubers of brown colour, that are difficult to see and they keep breaking when soil is moved), by double digging every autumn at The National Trust gardens in Mottisfont. The oxalis simply grew again every year.

In 2017, Jonny Norton, the new head gardener, decided to mulch this border instead, using thick cardboard and compost on top. The gardeners were unsure as to what the results would be, but they gave it a go and noticed how engaged the visitors became, asking what they were doing. Above all they were saving much time, effort and the lives of soil organisms.

Jonny Norton wrote to me recently, saying “the oxalis is very much now under control with regular light hoeing approximately bi-weekly”. The team is also creating a no dig kitchen garden to produce salad leaves for the restaurant and for selling. It is worth a visit if you are nearby.

Slugs and pest control aided by no dig beds

Slugs are like us – they need a home. Slug damage is related to the profusion or scarcity of nearby habitats and tidy plots with tidy edges suffer less damage than untidy ones.

Habitats and attractants include:

* low growing weeds, such as chickweed;

* decaying vegetable leaves on the ground, a magnet for molluscs whose life work is to process them into food for new growth;

* weak plants which send a signal of ‘eat me’ to slugs and snails.

The last point relates to soil health and no dig helps by growing stronger plants. Another big help is to sow each vegetable’s seed at its best time, so that strong growth is less interesting to pests.

Tip to reduce slug numbers: Be tidy. Remove all ageing, older leaves of Brussels sprouts, broccoli and kale before they go yellow and fall to the ground. Be in the habit of keeping plants tidy and pull any weeds you see, too.