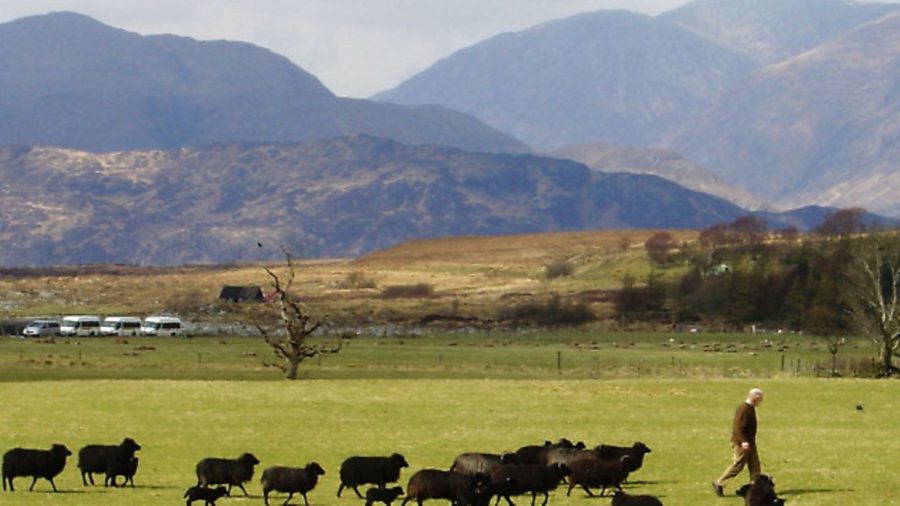 John Connolly owns a croft that runs down to the sea in Argyll, western Scotland. He is seeking a buyer…

We moved to this corner of Argyll at the end of 1995, having for some years sought throughout Devon, Cornwall and Argyll for somewhere, post ‘first retirement’, to try smallholding.

This was a bare holding when we bought it; no house, no fences, just grazing and steep hills. Hence, having built, we were able to move into the sort of house we’d always wanted. We were welcomed into the village that Christmas, Santa arriving on a decorated tractor with presents and a bottle of fizz.

We the help of a grant we fenced the croft, and acquired our first seven sheep, five in lamb. Next we obtained a few bee hives and were given some pretty Scots Dumpy bantams who much preferred our house to their own.

Our intention had for long been to build a flock of pedigree Hebridean sheep, which, at that time, were much rarer than they are now. They are the ‘perfect’ sheep, superb mothers, largely look after themselves and have a strong flocking instinct. They live outdoors all year, the little black lambs draw ‘aaaws’ from every visitor and tourist, and the spun wool is eagerly sought by knitters.

Having built over some years a healthy flock and a significant number of bee colonies, we branched out and kept a few Highland cattle and pedigree Tamworth pigs. As a result we joined the local farmers’ market, offering at various times, lamb (hogget, actually), pork, beef, honey and wool. The range of repeat orders spoke for itself.

As our holding runs to the sea shore, it was inevitable that we would take to the water. For some years we fished for langoustines, a great delicacy – although it is possible to OD on them!

Our polytunnel and fruit frame have allowed us loads of homegrown fruit and veg, and our large garden attracts both us and bees.

So why are we moving? It’s now time we (reluctantly) retired for the second time.