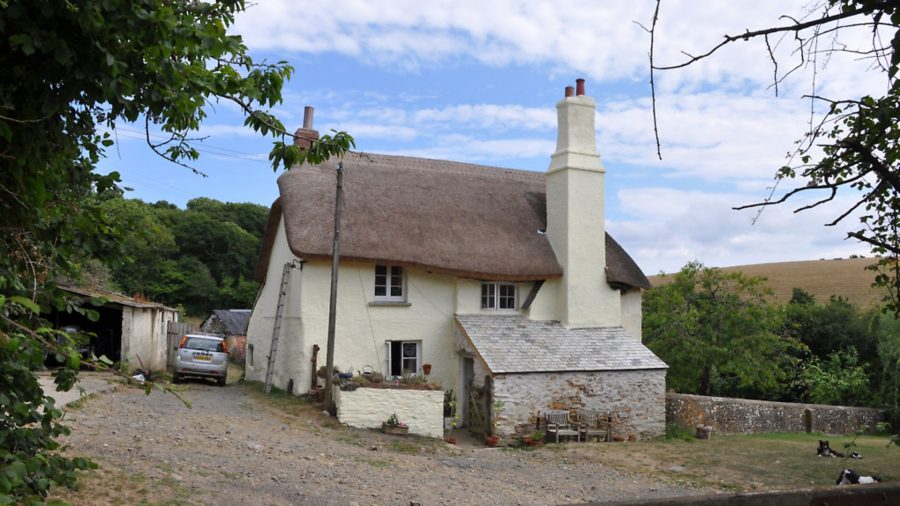 Harriet Mullins’ rustic bouquets, filled with the seasonal flowers she grows on her rented Devon smallholding, are finding favour with numerous local residents, including brides. She tells Julie Harding about her venture 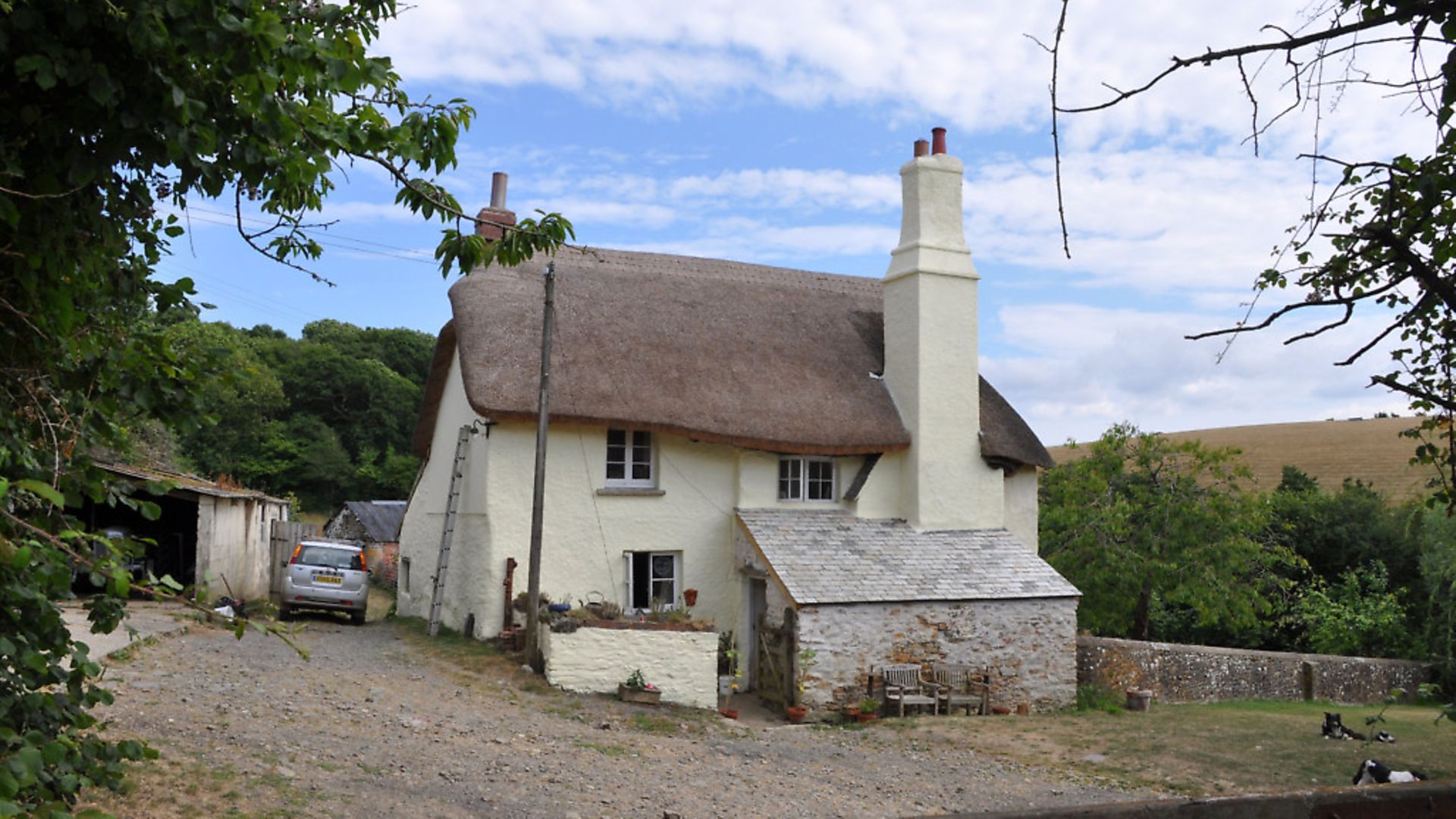 The path that leads to the clotted cream coloured cob cottage in the valley is steep, stony and slippery. It is summer and there is barely any evidence of water, bar where a spring trickles across the haphazard walkway. In winter this carved channel, which best suits 4x4s and tests two-wheel drive vehicles to the limit, often turns into a raging torrent, carrying mud and debris down into the 16th Century cottage’s yard and to within a few feet of its front door. The slip factor must then be magnified 20 fold.

“It’s a bit of a nightmare with the dogs in winter,” confesses Harriet Mullins, who has the confidence on the smooth fixed cobbles of the steep descent of someone who has raced up and down this mini cliff face on the Christie Devon Estates many times. 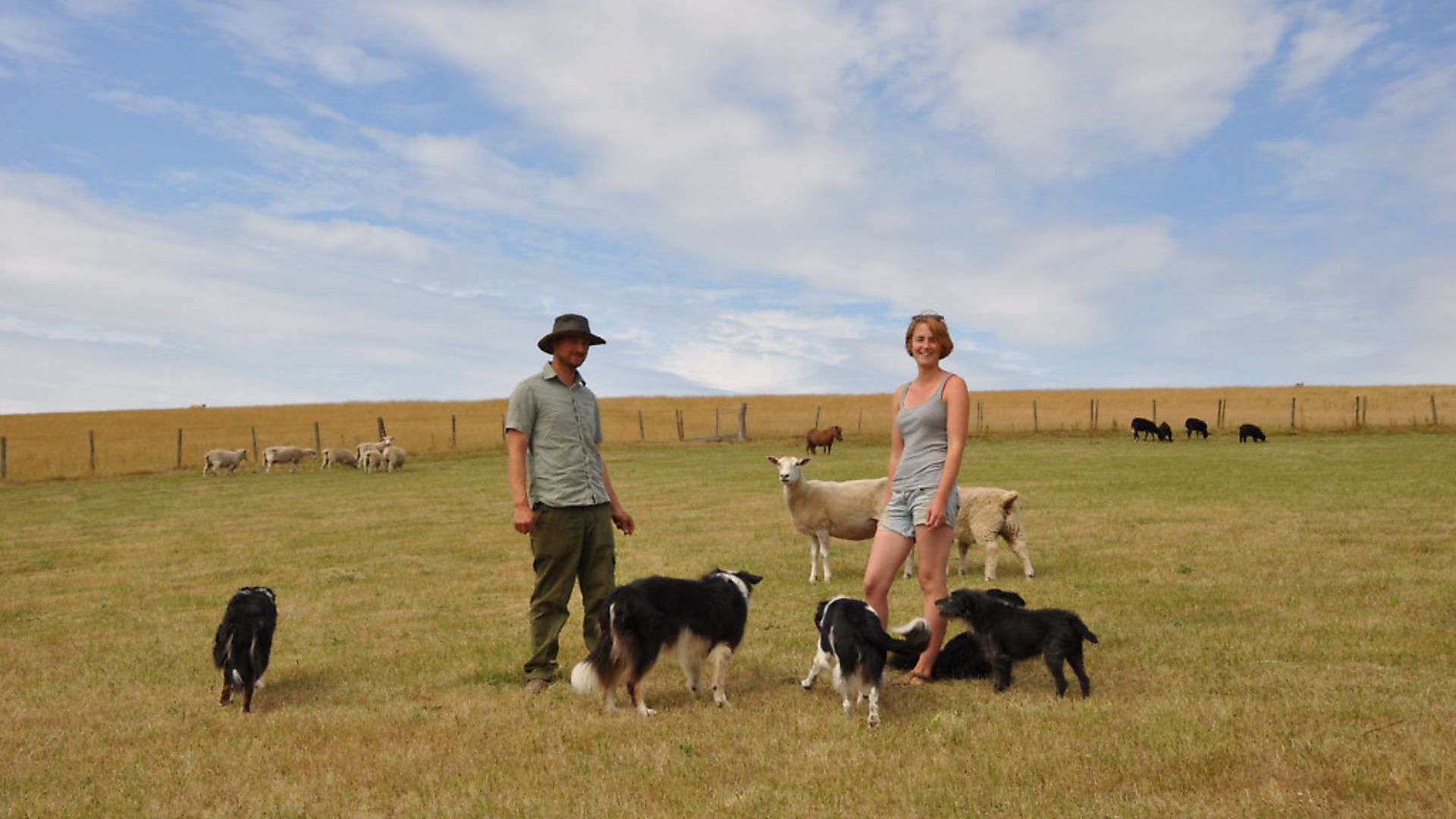 Six dogs, the majority of them Border Collies, bound up and down the steep grassy sides with enviable agility. Two of them belong to friends, while four are owned by Harriet and her partner, Woody Hudson. It is these big paws that carry the mud from the yard into the cottage on less sun soaked days. Today there isn’t a fragment of mud. Days of relentless sun have left only dusty soil. Harriet’s quarter acre of garden, located beneath the couple’s four-acre sheep paddock, has been baked for so long that small crevices are beginning to appear in the ground between the beds of roses, sweet peas and sweet Williams.

Despite spending her evenings watering — she is luckier than some and has mains water piped to this relatively isolated spot — Harriet still longs for rain. A deluge from a leaden sky would truly nourish the flowers she cuts for weddings, funerals and the myriad bunches she supplies to Johns, a deli and café located in nearby Instow and Appledore. 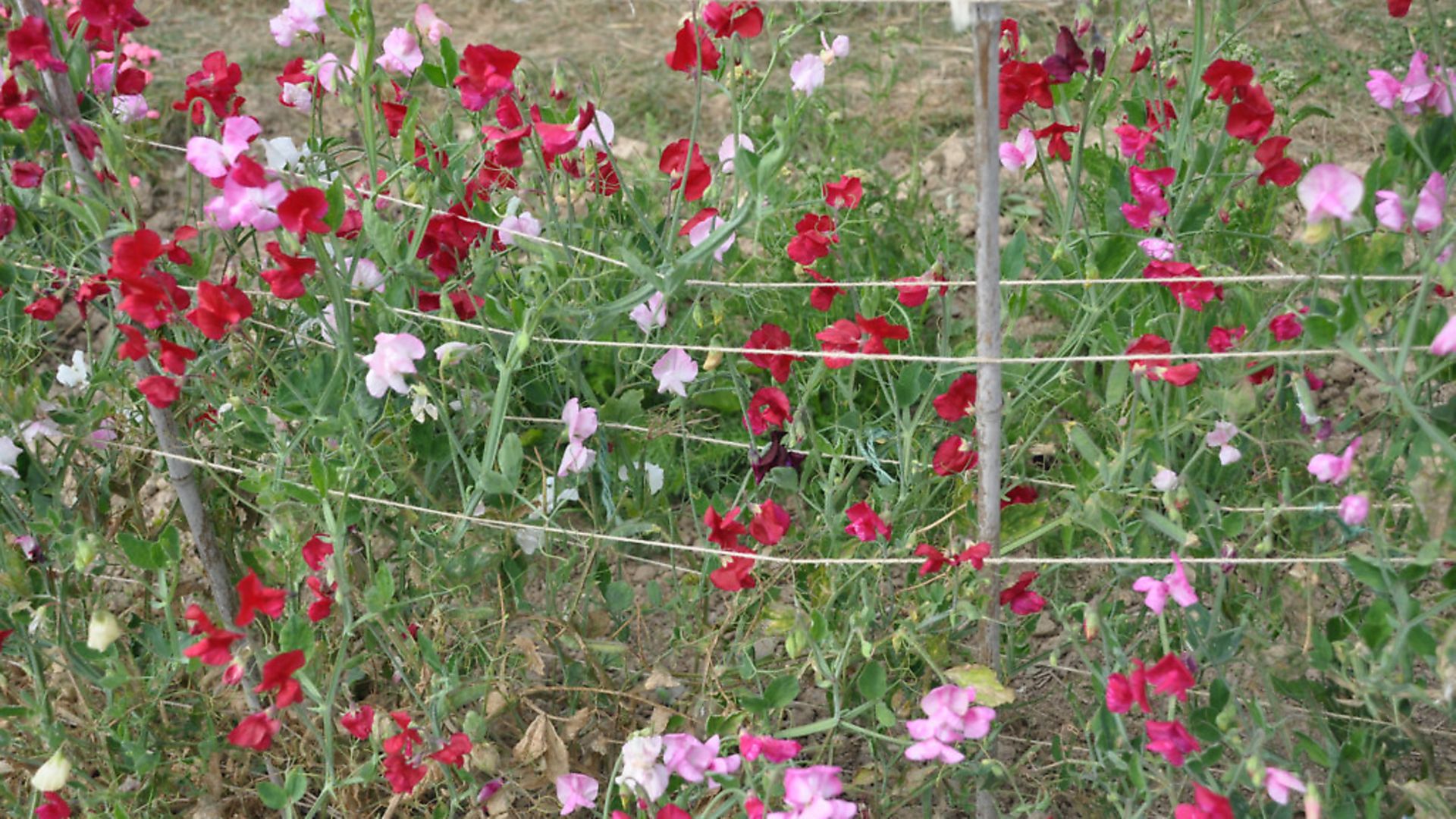 On fine days, Harriet’s flowers — the 20 or so bunches she delivers in the morning, often reduced to none by closing time — sit outside Johns in galvanised buckets.

“I sell more during the summer holidays or half terms so I take extra then,” says Harriet. “They usually sell out at weekends. I only take flowers that are in season. Johns held an event for local producers, so I met some of the people who buy my flowers and they told me how much they love them.” 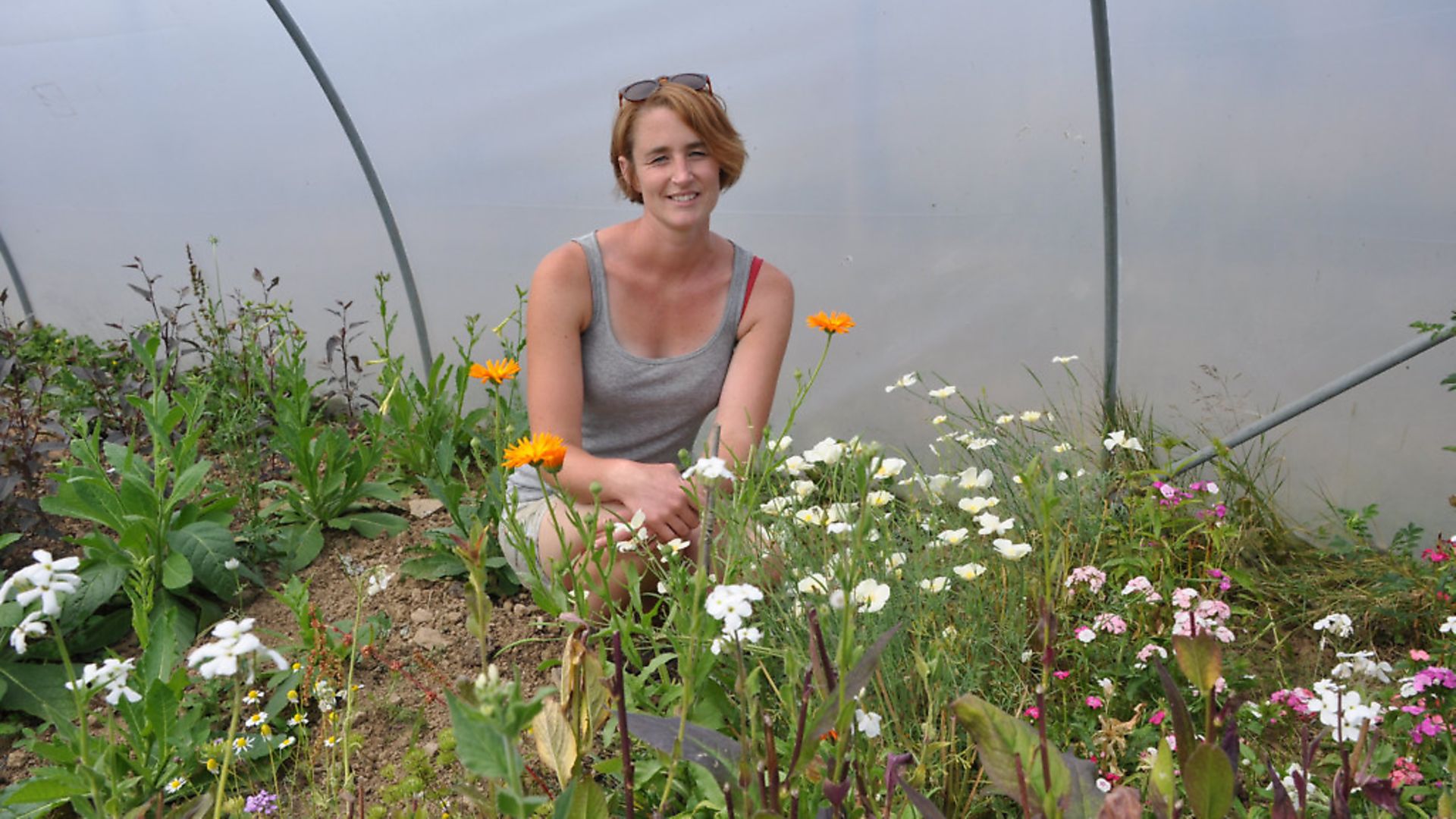 She sounds surprised, perhaps because she has never trained as a florist, but instead has a natural eye for what makes an aesthetic array of textures and colours, plus the knowledge gained at the floral art club she attends every week in Barnstaple for just £3 a session.

“I’m the youngest there by quite a few years,” she smiles. 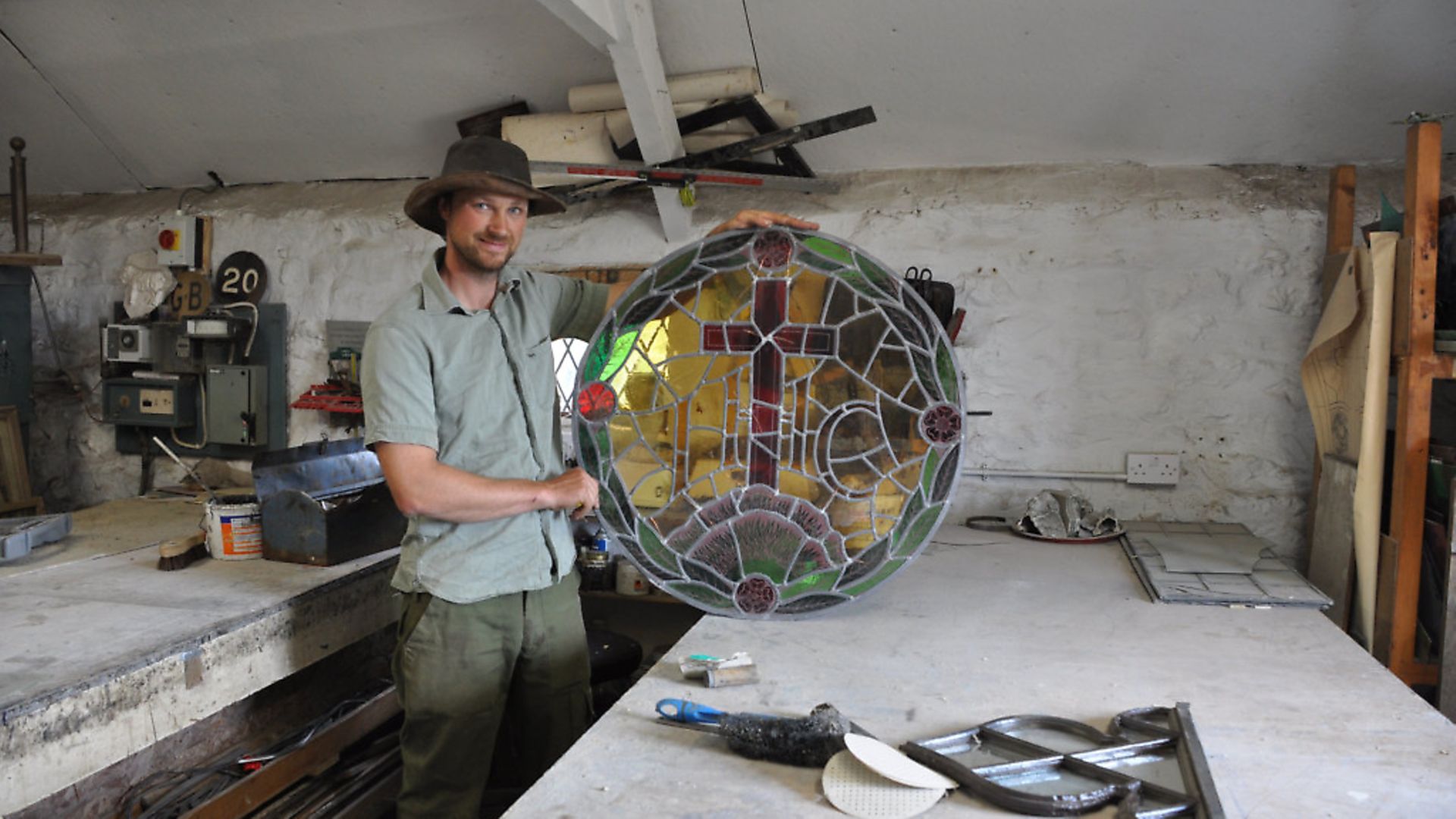 Harriet, who can often be found pouring over her collection of gardening books of an evening, is also a member of Flowers From the Farm. She finds it a useful advice forum, not least on the hot potato of pricing.

“Flowers From the Farm is how I’ve met local growers in Exeter and Combe Martin,” she says. “I’ve also got publicity because as a group we do plenty of shows. We won a Gold medal at Chelsea with flowers donated by members. I would like to donate mine next year.” 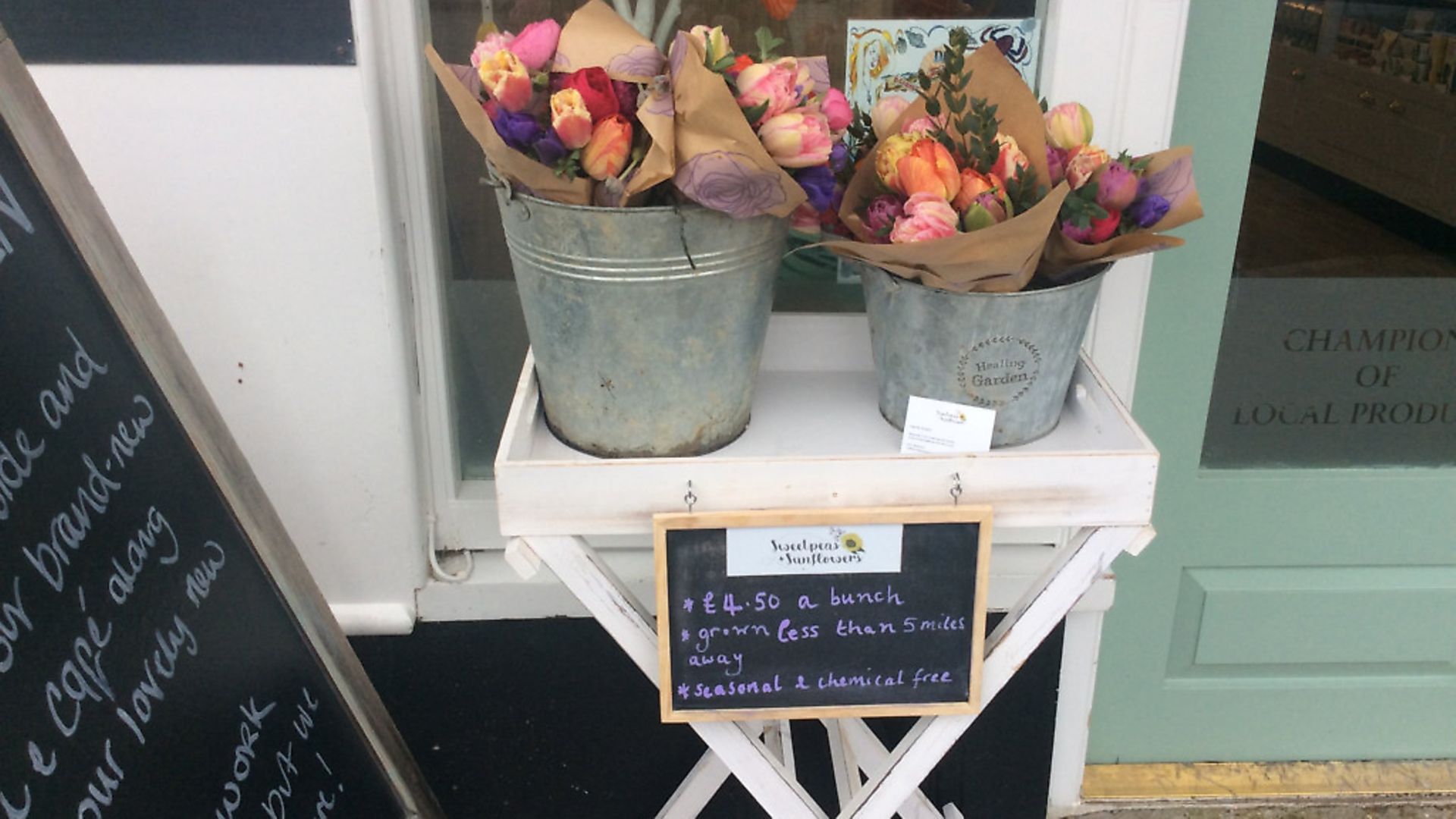 Harriet, who grew up in West Sussex with seven siblings, is meandering through her rectangular garden and in and out of a polytunnel (financed by a £3,000 start up grant she received from the Bideford Bridge Trust) pointing out the sweet Williams and sweet peas, the poppies and marigolds, bee-friendly vebena, the David Austin Queen of Sweden rose — “it was expensive, but great quality” — and the deep purple and white lupins that are currently growing.

“The lupins are Woody’s favourites. I use them for weddings, but they only flower for two weeks, so they don’t make sense cost-wise, although they are good if people get married at the right time.” She is already thinking ahead to next year.

“Purple will be the in colour in 2019,” she reveals. “The spring bulbs planted will be tulips, alliums and ranunculus.” 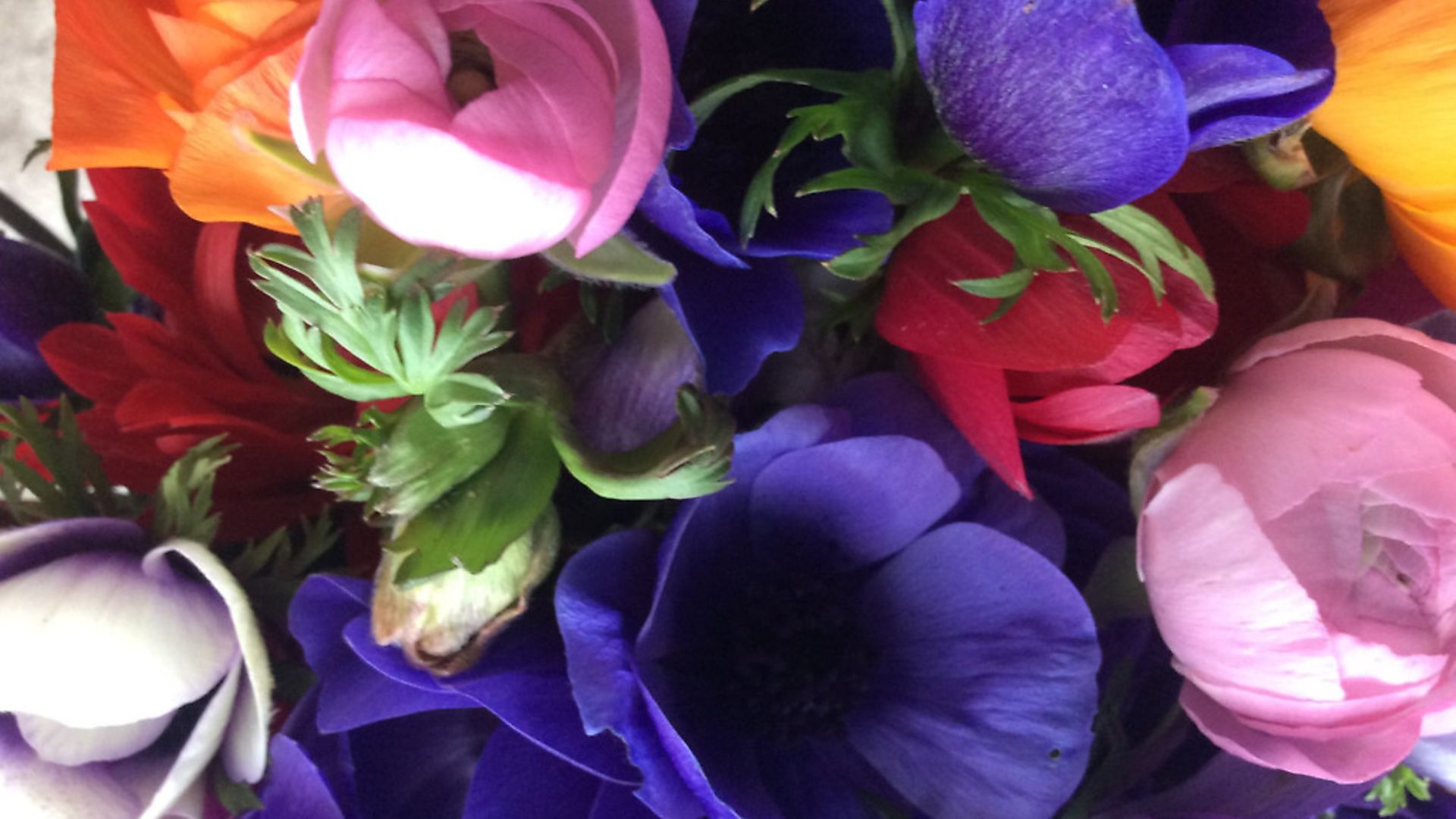 Tulips were the stand-out performers earlier this year at Johns. They simply flew off the shelves.

“It’s been a big learning curve and one thing I’ve learned is that a lot of people love tulips, so I will grow more next year. I love them myself and I mix the colours. The pinks sell well, but I really like the oranges and the reds. I’m learning, too, what lasts and that flowers need to be sturdy.” 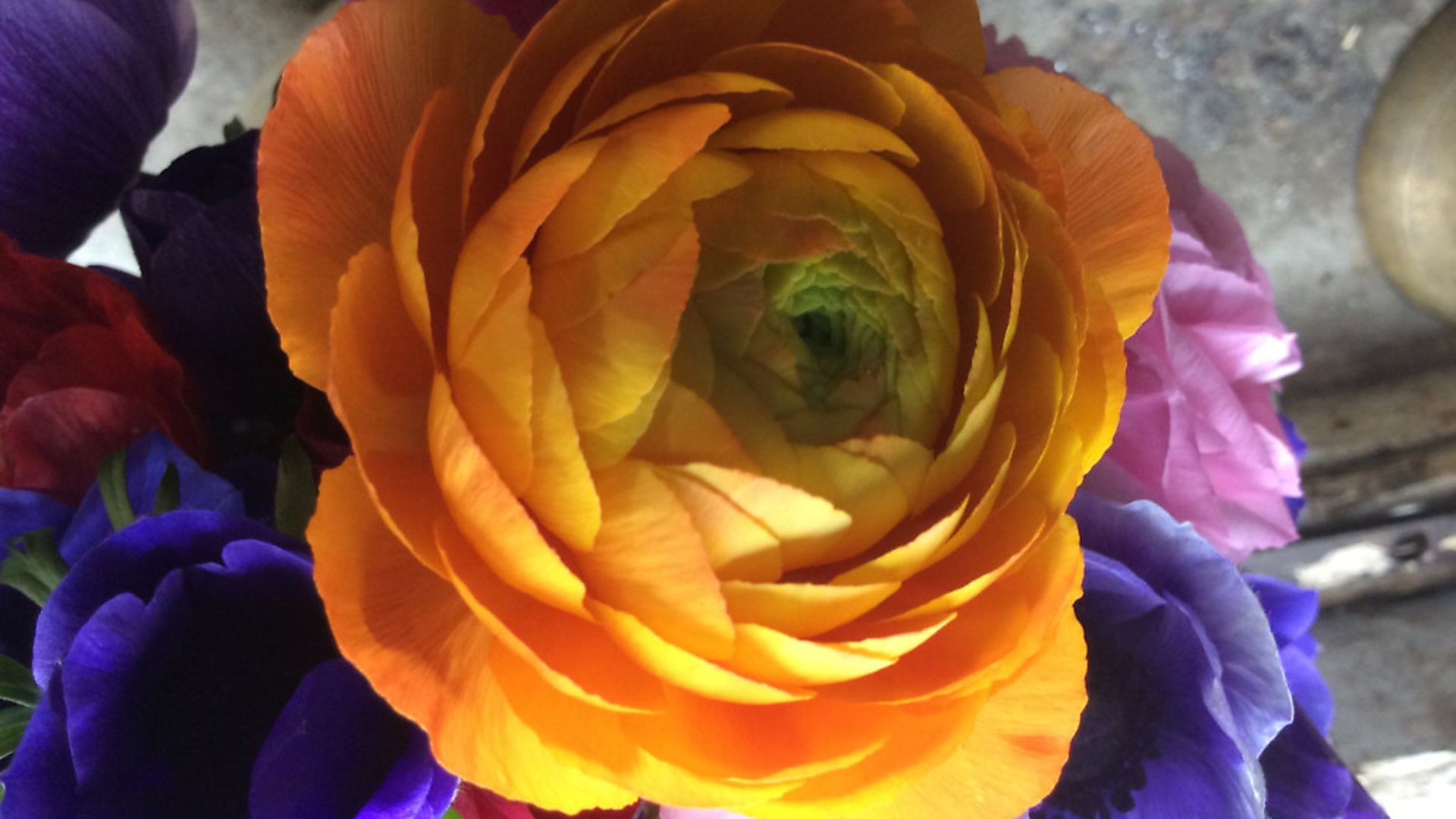 Harriet supplied flowers for her first wedding around two years ago, not long after she first kicked off her floral venture. This year she has had six commissions, but would like to double that soon.

“I wasn’t convinced that I would like doing weddings and, although the first couple were stressful, they are the money makers, plus my skills have improved and I enjoy the planning.”

Wedding flowers are always picked the previous evening and then stored in buckets in a cool shed.

“I get up at 5am on the wedding morning so that the flowers are ready to be dropped off at 10am. I get up far too early, just in case something goes wrong. Once I put the flowers in the car and a bucket fell over, wetting the ribbons. For the last wedding, I did 10 buttonholes, two flower crowns, a bouquet for the bride, plus four bouquets for the bridesmaids. They were all very simple. I can also do table decorations, and will provide DIY buckets so people can make their own if they want to.

“A lot of brides love ranunculus. Blush pink and white ones are the favourites for weddings, but I once did a spring one with yellow flowers. They looked incredible.”

On one occasion a lady asked for deep red roses in December and Harriet politely sent her to a traditional florist.

“When people enquire I tell them that my flowers are rustic/country cottage/festival flowers. It’s definitely a trend, as is people being more interested in things that are British made and grown.”

Harriet’s home-grown flowers have also been adorning cakes made by Bespoke Baking of Barnstaple, plus she has supplied a few local funerals.

“I’d like to do more funeral work. I’d also like to do a couple free for people who can’t afford flowers,” says Harriet, leading the way out of the garden gate and into the sheep’s field.

“Once the sheep got into the garden and pulled out all the plants. Daisy was probably the ringleader,” says Harriet, pointing to a Texal cross who is striding purposefully towards us. .“She’s also the one who leads the others into the slaughter truck. She was a bottle fed lamb and was given a name and so she can’t be eaten. When we were away once and mum came to feed the sheep, Daisy jumped up and nearly knocked mum over because she was carrying a feed bucket.”

Woody and Harriet currently have six ewes — two Texal crosses, two Zwartbles and two Devon and Cornwall Longwools — and six lambs that will be slaughtered for meat, but they would love more land as well as more Ovis aries.

“I keep badgering the estate, so they know we want more ground, even if we have to drive to it,” says Woody.

“We would like 30 ewes and a proper meat business,” says Harriet, continuing the conversation. “It was Woody’s thing to start with. I was a vegetarian, but I don’t have a reason to be any more and I started eating meat again recently. I would only eat our own meat, though, and I love keeping lambs. We sell our meat to friends and through word of mouth. It’s all grass fed and we keep medication to a minimum.”

Coping with a herd of sheep and supplying more weddings and funerals with flowers will only be possible if Harriet is able to relinquish her part-time job as a forest pre-school assistant.

“I love the job. I’m outside all the time with under fives, but in the next two years I would like to do the flowers/smallholding full time and then I’d definitely have more time for sheep.”

Like many people living the ‘good life’, Woody and Harriet’s main concern is having enough money to put food on their huge rectangular kitchen table.

“Our overheads are low. We don’t have central heating — only a Rayburn — and no posh holidays. We grow as much of our own food as we can, and although this year we may lose money on our hay as the grass didn’t grow, usually everything covers its own cost. But if you worked out our hourly rate we wouldn’t reckon on making much money,” says Harriet.

Their dreams are simple, pastoral ones that echo the wants of country folk down the centuries. Woody would love to walk out to his paddock and see a horse grazing. He once had Booty, who he bought off a gypsy just broken to harness and who he would drive to Bideford to collect supplies.

“Booty would trot from Instow to Bideford and barely break into a sweat. Sometimes I would sit in the back of the cart and just drive him with voice commands. He was jealous of Harriet, though, and once pushed her into a hedge and then chased her across a field,” smiles Woody. “But then he started to stumble and overreach and I gave him away. He’s got a great home now. It’s hard to find a good 16hh horse for driving, but I’ve still got some carts. If I won the Lottery, I would buy a small herd of cows and deliver the milk to Instow in a horse and cart. It may make a loss, but who cares.”

Woody leads the way into one of the barns and up a set of wooden steps to a studio where, on one of the tables, is a giant circular plum- and gold-coloured stained glass window, with a commanding cross in the centre. This was once Woody’s late father, Bill Hudson’s glass workshop and to bolster his bank balance Woody has taken on some of Bill’s clients.

“When he died five years ago there was a half finished design on the table. I had to pay the rent, so I finished it off,” says Woody, who is also a part-time tug deckhand.

In the couple’s unpretentious kitchen, the deep, dark mahogany wall panels and furniture are counteracted by half a dozen pale pink and white roses in a simple glass jar in the centre of the cocoa coloured table. They provide a mere hint of the incredible floral delights Harriet fashions from her tiny garden between April and October.

“There isn’t much I would change,” says Harriet of her life. “Although the winters can be hard here, I love growing things and being outside, plus every time I get an email commission it’s so exciting.”