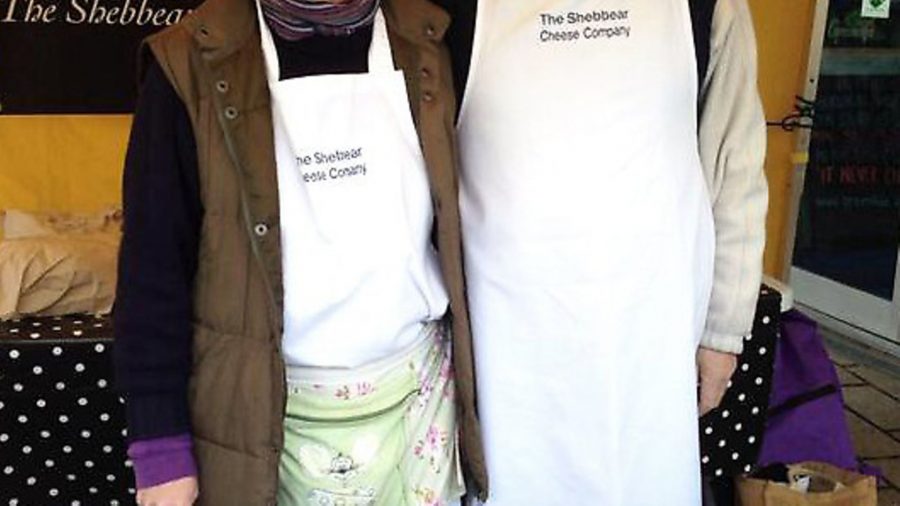 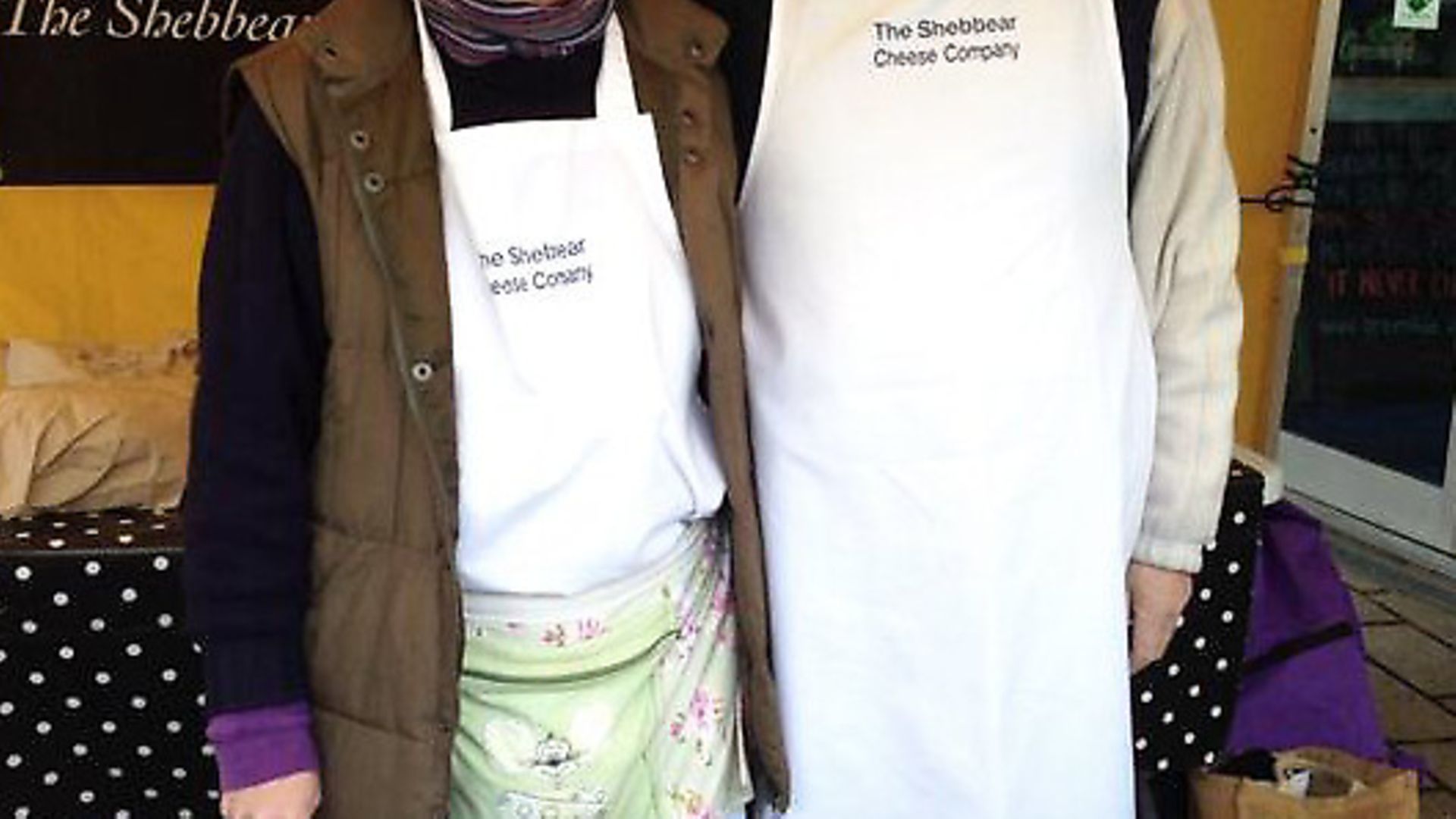 Husband and wife team Sarah and Chris Styles-Power, live in Shebbear in West Devon on a 3.8 acre smallholding where they are two-days-a-week cheesemakers. The venture started as Sarah’s hobby and as demand grew, so did Shebbear Cheese. The night before making day they have a massive clean down of their kitchen to meet the requirements of the Environmental Health Officer and the Rayburn is let out to avoid any ash and other unwanted debris getting into the cheese; in its early liquid form, cheese is highly susceptible to microbes and contamination. Because of their small scale they must adhere to the standards required of all food businesses but don’t come under the full force of EU law. Processing up to 150 litres of milk a week, they make six different cheeses, matured for up to four months: Borough Blue, Old Sheb, Bramley Barton, Forda Ash, Rupert’s Choice and a cow’s milk feta. This is much reduced from the 12 varieties they were making at one point when an artisan food mentor suggested that perhaps they were making life too complex for their micro set-up.

“Making cheese in the kitchen is a bit of a pain,” says Chris, but having looked at the costs of converting a barn into a dairy it just wasn’t going to prove economically viable, and in any case Chris has already retired three times (from the navy, United Nations and the police) and the current scale of activity is quite enough for the couple. Sarah runs a range of cheesemaking workshops in the kitchen, teaching six participants at a time, and most of the equipment is familiar to any cook: large stainless steel pans, roasting trays used as a bain marie, whisks and palette knives. A thermometer is essential, preferably one that’s dishwasher-proof, and you do need moulds and a press for anything other than soft cheese. Sarah reassures me that “if you’re doing cheese for yourself, it’s easy to get 8 litres of milk for one 0.8 kilo cheese just once or twice a month, and you can use your own kitchen equipment”.

Cheeses, like any other commodity, go in and out of fashion. “They change in popularity over time,” says Sarah, and some of the cheeses are tricky to make, with some pretty technical requirements such as monitoring a rise in temperature of two degrees centigrade every five minutes over a 35 minute period, which requires constant gentle stirring and checking. Whilst I was there the timer was continually going off to remind them of the next step in the process, the thermometer was in and out of the milk like a yoyo, and the heavy pans of warming milk were lifted from their hot water baths accordingly. “It’s not a pastime for the impatient or the frail and we are slaves to the timer,” says Chris. 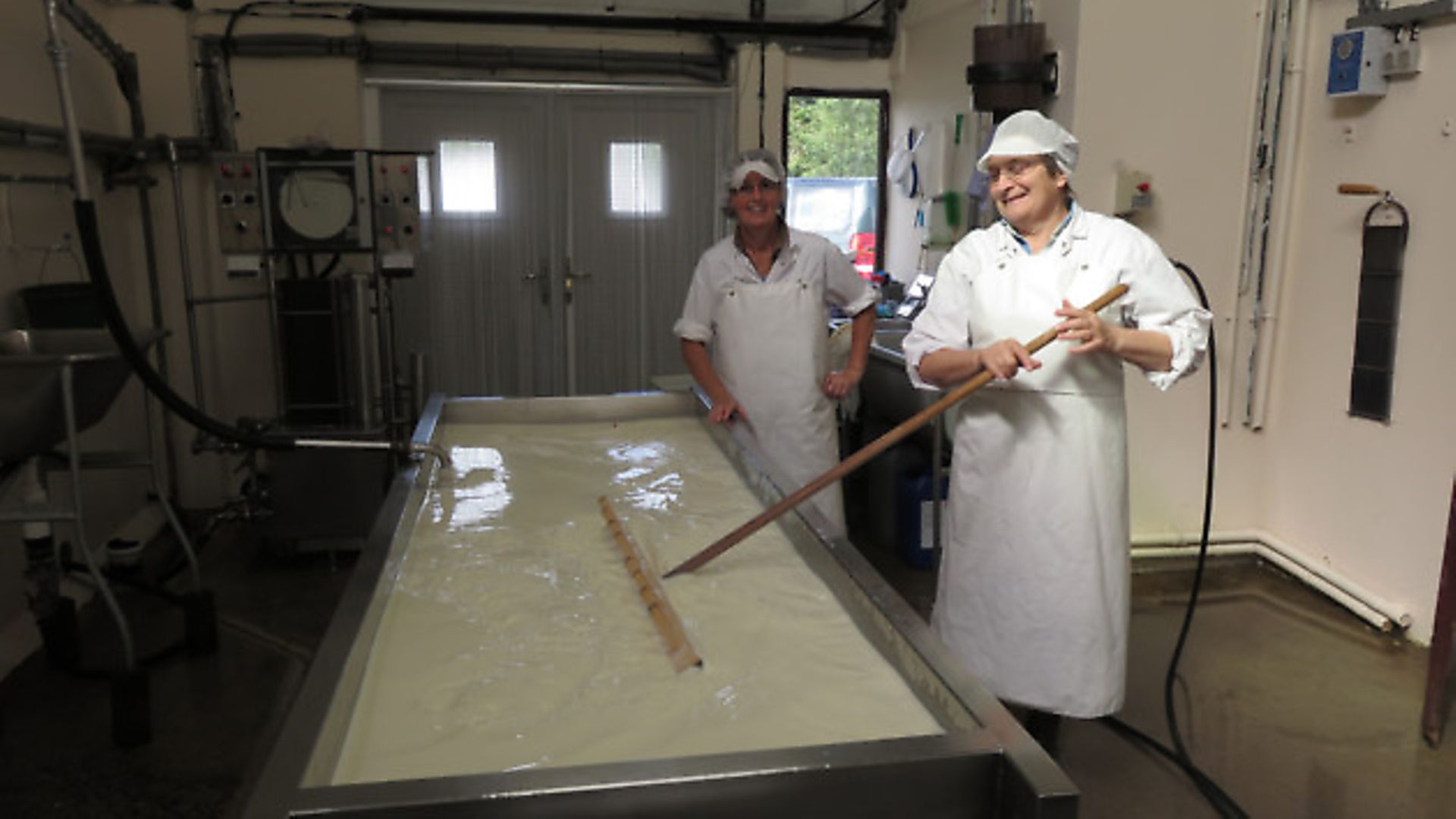 Sarah and Chris don’t have cows or goats of their own so they collect the milk direct from a local dairy in sealed 15 litre buckets, paying £1 a litre. Sarah started out following cheese recipes from American books and took detailed notes and then combined processes, experimenting, making mistakes and coming up with recipes of her own. “A particular cheese might use the same recipe and process but every cheese is slightly different,” she says. Sarah continues to get a buzz from seeing milk turn into curds. “You need to be in a calm mood to make a good cheese; it’s a therapeutic process. You can’t go off and mow the lawn, although Chris might do a quick bit of ironing. You have to keep a constant eye on the temperatures. It’s quite a selfish occupation – you just have to concentrate on the cheese.”

The couple move around the kitchen as if in a fully choreographed production – one moment Sarah is gently whisking two vats simultaneously as Chris takes one whisk from her which allows her to test the temperature with her now free hand.

They sell their cheeses at a number of food and farmers’ markets and have found their takings increase significantly after adding homemade pies and a salad bar to their offer. So, after I leave them, the kitchen will get another thorough cleaning and pies and salads will be made the same day ready for that week’s market. Chris in particular loves the markets, the camaraderie of the traders and the response from the public gives him real pleasure and lots of laughter. 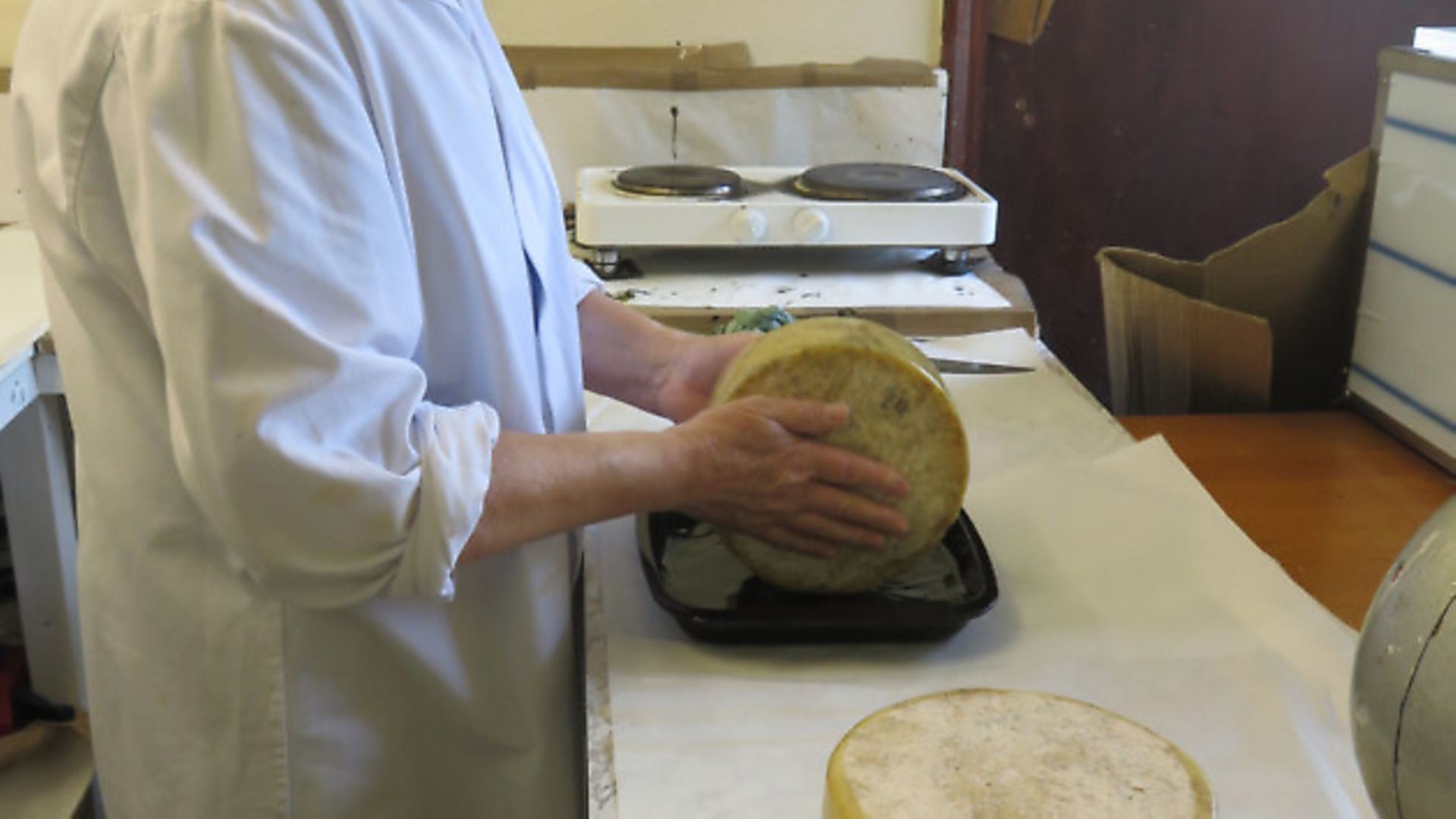 Rachel Stephens and Elaine Morgan of Curworthy Cheese are just a few miles away at Stockbeare Farm, near Okehampton. They are one of the few remaining makers still stirring their milk by hand (using wooden stirrers that look a lot like hay rakes) rather than relying on the mechanical stirrers used by the majority of small-scale cheesemakers. Curworthy was set up originally by Farmers Weekly in the 1980s to provide readers with a regular insight into dairying and the cheesemaking process, and twenty-eight years ago Rachel took over the business and transferred it to Stockbeare Farm and a purpose-built dairy. For more than 20 years the farm provided all their milk, but it’s now bought in from local dairies. They process 850 litres of milk in a single vat big enough to take a bathing Cleopatra or two, producing 180 kilos of cheese daily, four days a week. The rest of the week is used to sell the cheese and Tuesday mornings brings customers to The Cheese Pantry, their tiny and much loved shop bang in the middle of Hatherleigh market. Here they sell their 17th century recipe cheeses: Haytor, Meldon (with real ale and mustard), Curworthy, Devon Oke, Dartmoor Chillie, Chipple (with spring onion), Vergin (with fresh ginger) and more, plus a selection of cheese from other artisan makers in the West Country. But it’s not just a once a week retail effort for Rachel and Elaine; I can’t remember a Devon agricultural show without them, plus farmers’ markets, garden shows, food festivals, Christmas markets and more.

Unlike Shebbear, they receive their milk raw and pasteurise it themselves. Elaine says she now makes 90% of the cheese and Rachel experiments with new products – while I was there Rachel waxed the Meldon cheeses and was constantly at hand to add ingredients (there was a delicious smelling garlic and chive cheese being made during my visit) and do hundreds of other tasks. “I play around with small quantities of about 18 litres of milk to try new things,” says Rachel. On the shelves was an experimental soft cheese with the glorious name Devon Maid which Rachel shared with staff Anne and Rene (and me) for lunch in a version that had been ripened for a fortnight, and another that had been in the cheese store for six weeks. The two were blazingly different, which highlights how critical the maturing process is; Curworthy cheeses take up to 17 months to mature.

In contrast to the 50 or so cheeses kept at Shebbear, Curworthy’s splendid store houses over a thousand maturing cheeses, from the small 500 gram truckles to the massive wedding cheese bases that are becoming increasingly popular with people who want a change from celebration fruit cake and icing. “And every single one of these has to be turned at least once a week,” explains Elaine “to stop the top of the cheese drying out and to ensure the moisture in the cheese is evenly distributed. It takes Ann and Rene most of the morning to turn them all”. The cheese store is also where the brining takes place. “No salt is added to the cheese initially, so all are bathed in brine once pressed; this suits our ancient recipes and helps the cheese retain rather than expel moisture.”

Curworthy’s approach might be larger scale but it’s still all very hands on, from the stirring, measuring for acidity levels, filling the moulds with curds, pressing, brining, larding, turning and waxing, and it’s easy to see how such a delicious smallholder hobby can become a micro business and then expand into something rather more ambitious.