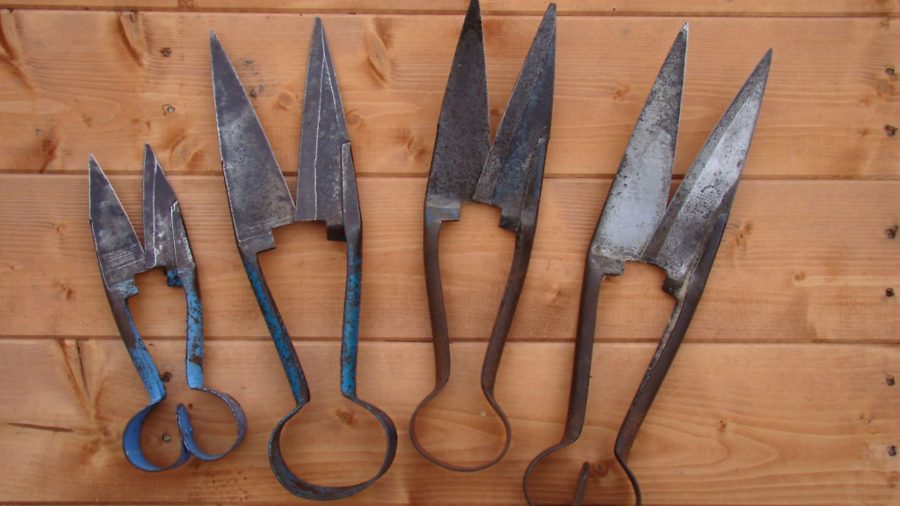 Most breeds of sheep require shearing. Tim Tyne explains exactly how to tackle the vital job of shearing a sheep 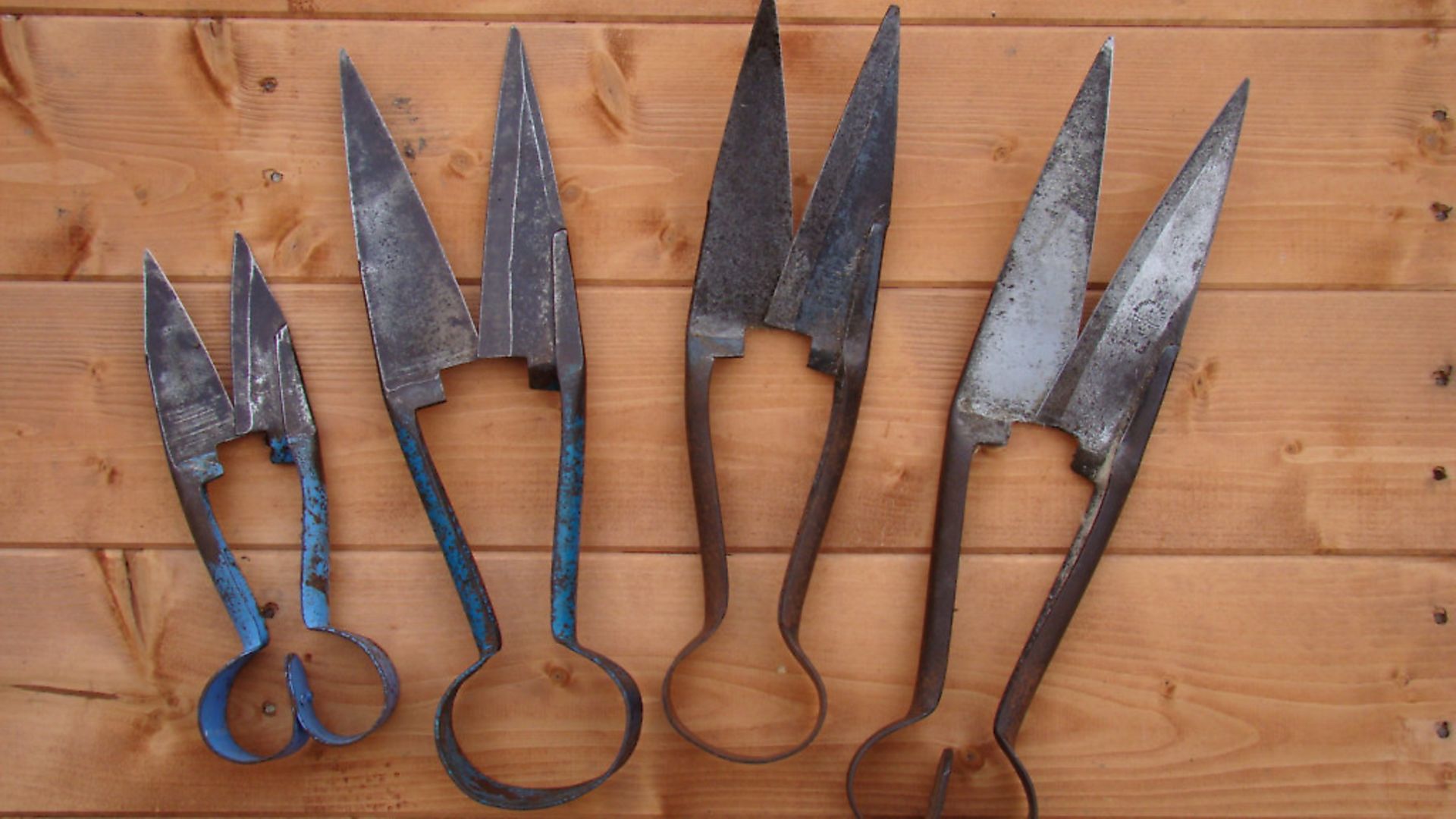 Although sheep were first domesticated around 8,000 years ago, several thousand years elapsed before they began to be exploited for their fleeces. In fact, early breeds of sheep had a hairy coat and were kept for their meat, their hides and their milk. It wasn’t until about 2000BC that the use of wool really began to catch on in Britain, by which time breeds similar to today’s Soay had been developed that produced a short fleece rather than hair.

However, these breeds didn’t need to be sheared as they shed their fleece naturally each year. It was the Romans who introduced ‘modern’ sheep to Britain, the ancestors of the currently recognised longwool breeds. These heavy-fleeced animals required shearing in order to harvest the wool, a practice that has been a part of the shepherds’ annual calendar ever since.

For a while, wool became the principal output of British sheep flocks, although its importance began to dwindle at around the time of the industrial revolution. Nowadays it has largely been superseded by synthetic materials, but with increasing concern regarding pollution of our oceans by man-made microfibres which have a detrimental impact on the very foundation of the global ecosystem, it is perhaps time for wool to rise to prominence once again. 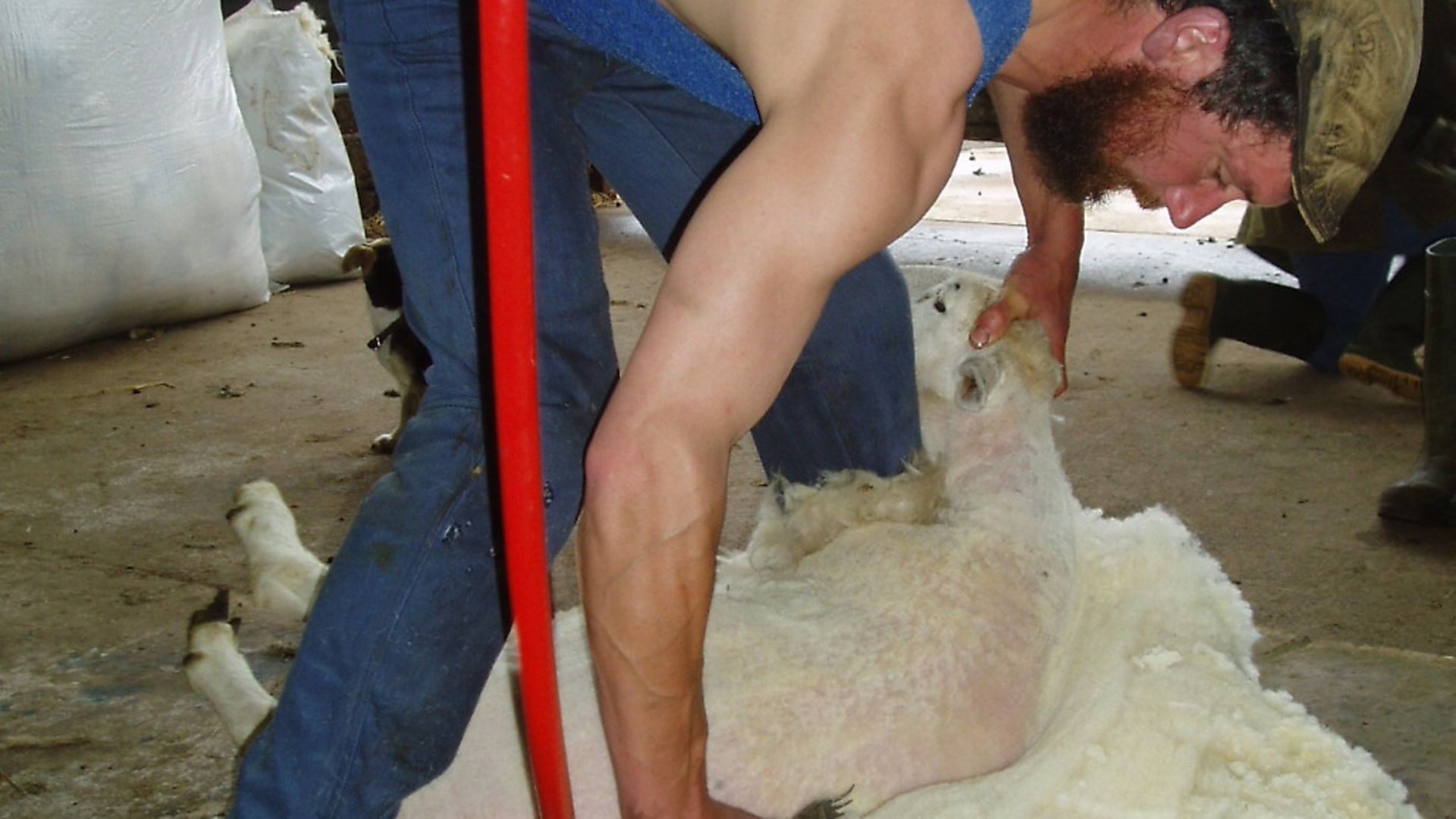 Although there are a few alternatives to shearing (see below), the majority of breeds must be shorn every year. Leaving them unshorn would result in health and welfare issues, such as high parasite burdens, flystrike and overheating. As a smallholder keeping just a few animals, it makes perfect sense to learn to do the job yourself, particularly when you consider that professional shearers will usually charge a minimum callout fee, which may push the cost of shearing a small flock beyond what is financially bearable. One of the nicest things about shearing your own flock is that you don’t have to do them all at once. If you clip just a few each day over a period of a week or so it is not too strenuous at all. 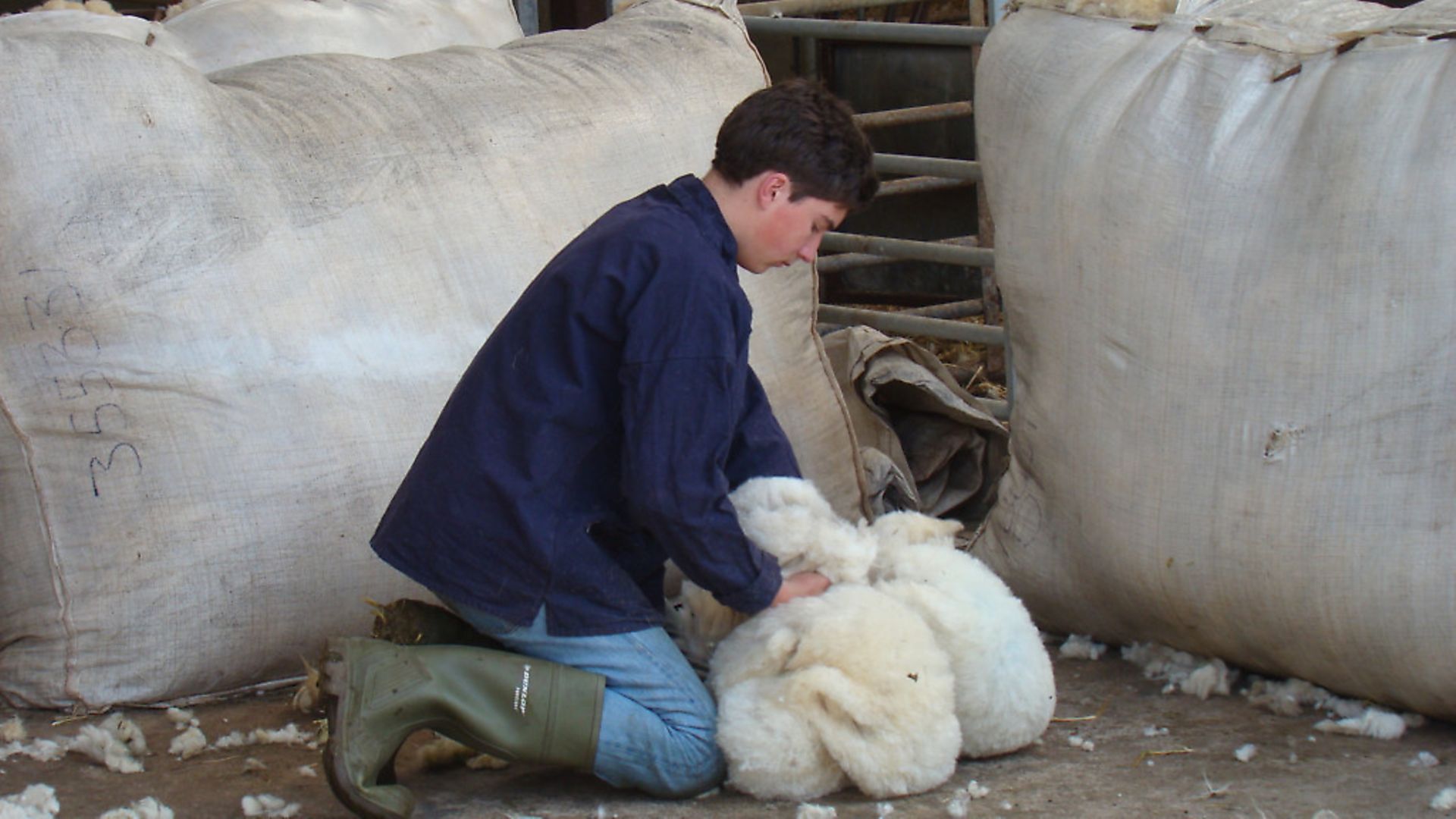 As I mentioned above, some primitive breeds such as the Soay will naturally shed their fleeces and so don’t require shearing. If you want to make use of the wool from these types of sheep then you will need to either collect fallen wool from where it has rubbed off on fences, brambles, etc, or catch the animals at the appropriate time and pluck the wool away. Another alternative to shearing would be to keep a woolless breed such as the Wiltshire Horn, or its derivative, the Easycare.

Shearing these days is generally carried out using mechanical clippers. Most have an electric motor (either mains or 12V) that is connected to the handpiece via a flexible shaft, but some smaller sets contain the motor in the handpiece. These tend to be a cheaper option and are often favoured by small flock owners, but they are rather cumbersome to use. Either way, a shearing machine is an expensive bit of kit, as are the replaceable cutters and combs. For very small flocks I would recommend the use of traditional hand (or ‘blade’) shears, which can be purchased for around £25 and will last for years if well looked after. Whether shearing by hand or machine you can follow the same basic sequence of movements required to remove the fleece all in one piece without causing undue strain to yourself or stress to the animal. 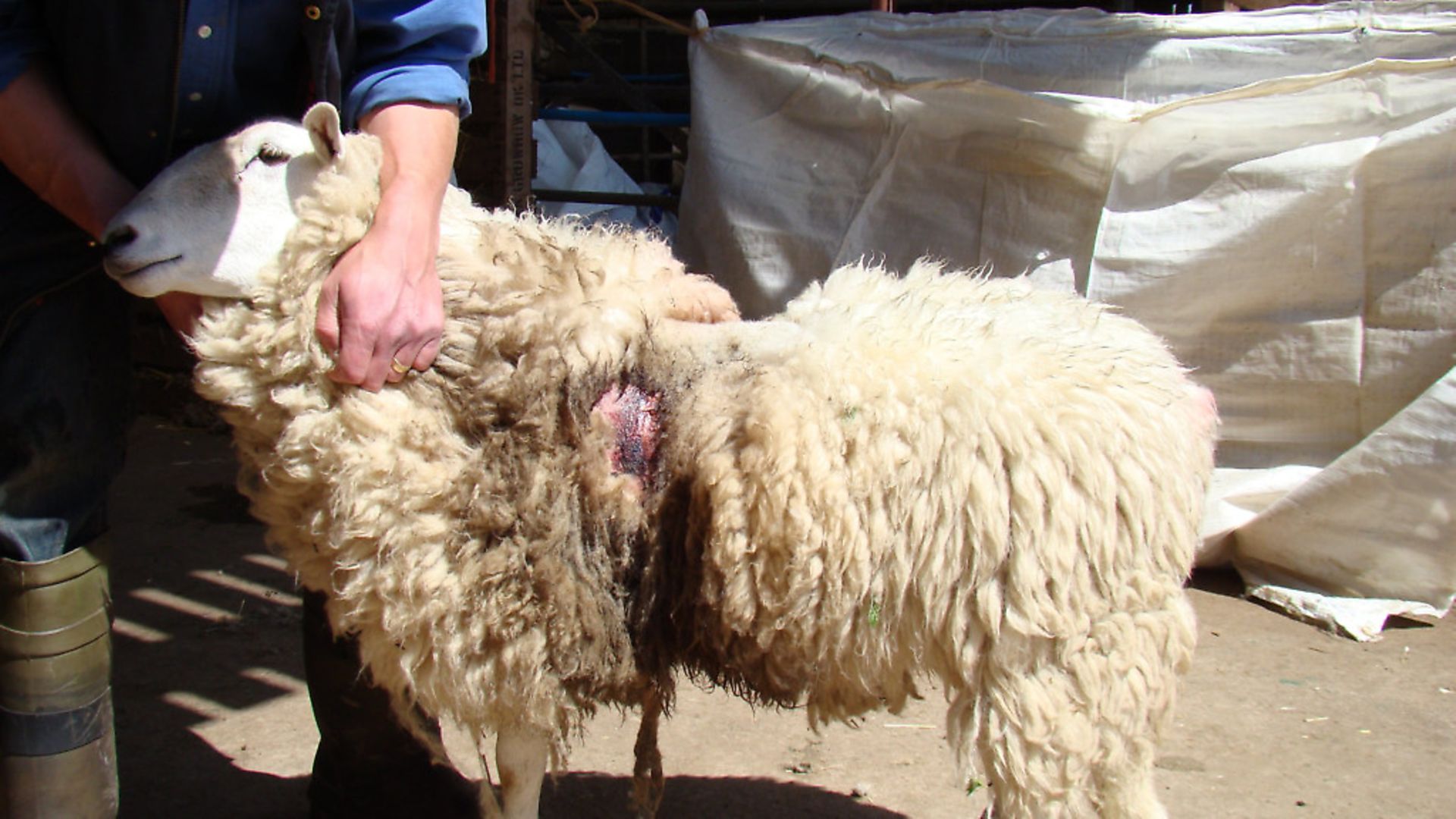 To the untrained eye, a pair of shears is just a pair of shears, but there are, in fact, various designs and sizes available and it really does make a difference to the work in hand if you have the right shears for the job. For hand shearing, you really need a pair with 6in blades. These are often erroneously sold as ‘dagging’ shears when, in fact, they are quite unsuitable for that purpose. Dagging (the removal of soiled wool from around the back ends of sheep) is best carried out using a very small (3½in bladed) pair.

Shears may be either cranked or straight, with the straight ones being better suited to shearing. Cranked shears are generally used when preparing sheep for the show ring.

There is also the question of whether to choose single- or double-bow shears. The single bow gives a nice crisp squeeze and the blades spring apart smartly between snips so the points of the shears don’t catch in the fleece as you slide them forward for the next cut. However, beginners may find that a double bow is less tiring. Shears are available with a ‘regulator’ bow, which enables you to vary the stiffness according to the situation. 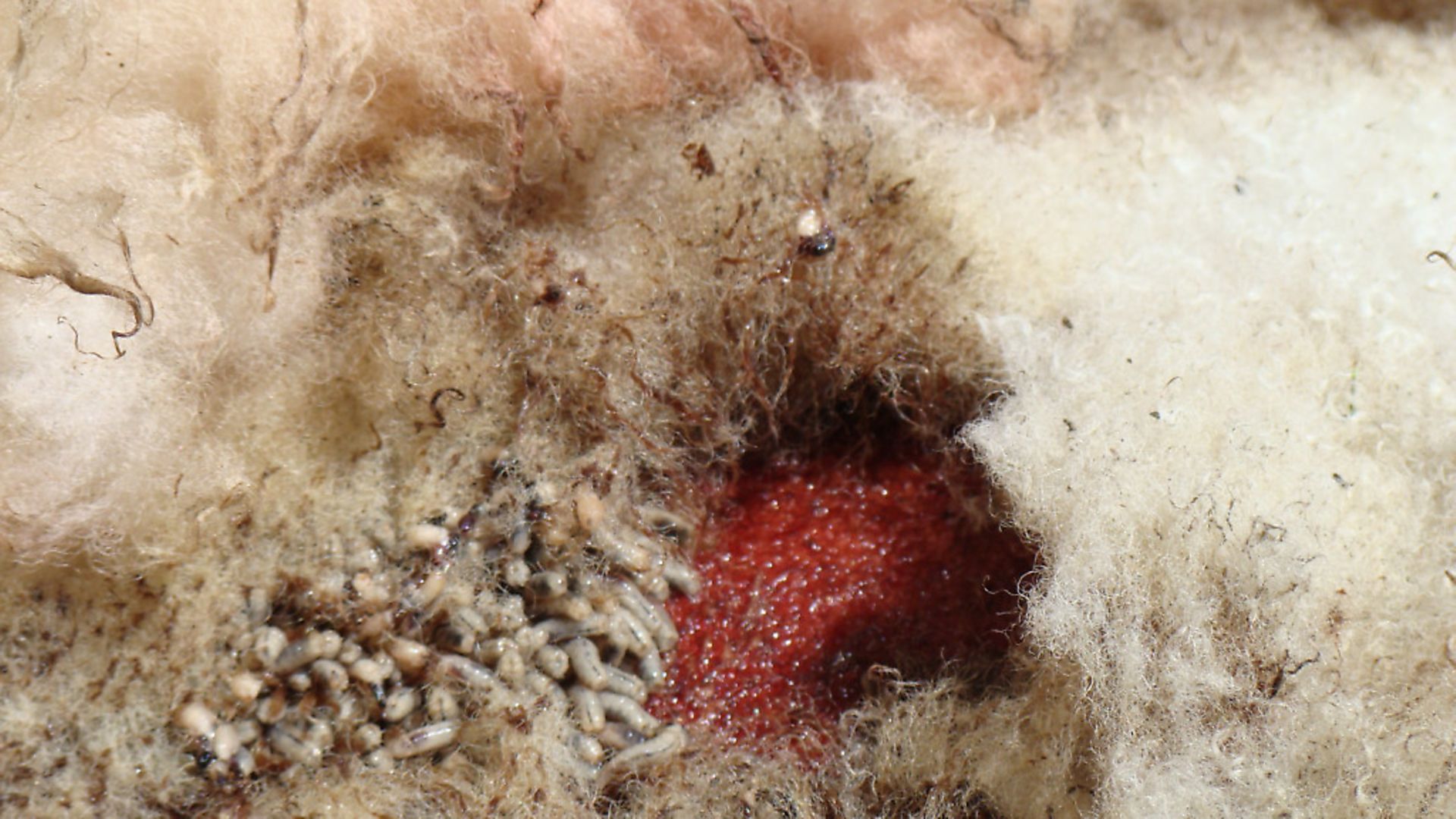 While dagging shears have a relatively short lifespan due to the nature of the work that they are subjected to, a decent pair of shearing shears may last a lifetime if well looked after. I purchased mine in 1985 and they are still going strong.

In addition to shears, you will need a clean, level surface to work on. A piece of plywood is ideal. If shearing outdoors it is a good idea to spread a sheet of tarpaulin over the ground as well in order to catch all the little snippets and oddments of wool and to prevent the fleeces becoming contaminated with grass seeds, etc.

You will also need a handy pen nearby to contain the flock. Pen the sheep up quite tight so that they sweat a bit as this will make shearing easier. The position of the pen relative to the board should be such that you can tip a ewe over as you exit the pen and end up with her sitting on her bottom on the board, held between your knees with minimal effort. You certainly don’t want to be manhandling each animal over any distance. If you haven’t got a helper to open and close the pen gate for you then it’s a good idea to fit a piece of bungy cord so that it automatically closes behind you as you will have your hands full.

If you are shearing just a few sheep then there is no need to worry about specialist clothing, but you will need to wear slippers or moccasins rather than work boots or wellies. Alternatively, shear in your socks. Much of the manipulation of the animal during the shearing process is carried out using your knees and feet and heavy boots don’t allow sufficient manoeuvrability.

Start by shearing the sheep’s brisket, belly and crutch while she is sitting up on her bottom. Next allow her right front leg to slip back between your legs and use your knees and feet to turn her onto her right hip. This puts her into position for you to shear the whole of her left hind leg right up to (and preferably a little over) her backbone, and her tail. Having done this you then step forward while lifting the sheep up into a higher sitting position in order to shear the left hand side of her neck.

This is followed by the left shoulder. On completion of the left shoulder, lower her down onto her right side and keep her in position by placing your left foot under her right shoulder. Now you shear the ‘long blows’. Starting from the forward edge of the area that you cleared when shearing her left hind leg, each blow runs the whole length of the sheep parallel with her backbone. At the end of each blow, lift her head slightly and make a short blow around the right side of her neck.

Once all of the wool is cleared from her left side, step over the animal with your right foot and lift her head up and hold it between your legs. In this position, shear the remainder of the right hand side of her neck and her right shoulder. From here you gradually shuffle backwards, which has the effect of pulling the ewe back up into a sitting position. Continue clipping as you move until the whole of her right side is done. Finish of by shearing her right hind leg and then allow the ewe to stand up between your legs and run off behind you. Using hand shears the whole job ought to take you about five minutes.

To roll the fleece, scoop it up in your arms and then toss it out on to the board in such a way that it lands neatly spread out, with the skin side underneath (except for Blackface, Herdwick and Rough Fell fleeces, which need to be skin side up). If you do this correctly, the hind end of the fleece will be closest to you. Pull off any daggings and place the belly wool in the centre. Fold in the sides of the fleece and then roll it up, starting from the hind end. Finish off by loosely twisting the neck wool and tucking it in to hold the rolled fleece together. The fleeces are then packed into hessian wool sheets or, on a smaller scale, into paper sacks.

If you are intending to make use of the fleece yourself then instead of rolling it as described above you might choose to divide the fleece up straight away into its different quality areas and store each part separately. The best quality wool is found on the shoulders and then the back. Other areas to separate out are the sides, neck, haunches, tail and hind legs, plus the forelegs. You might also want to keep different coloured wools separate from one another and the fleeces from younger sheep.

Registration with the British Wool Marketing Board (BWMB)

If you keep more than four adult sheep you will have to register with the BWMB and, in most cases, you will have to sell your wool to them. However, certain rare breeds are exempt from this requirement. You can also request an exemption for the purpose of retaining home-produced fleeces for artisan craft purposes.

The nasty affliction of flystrike

Flystrike (or ‘maggots’) is one of the nastiest afflictions of sheep. It can affect other animals too — hutch kept rabbits are particularly prone — but sheep are the species with which the condition is most usually associated. Flystrike is caused by the greenbottle fly, which lays its eggs in damp and soiled areas of wool, such as is found around the dirty backends of sheep. It can also occur on other parts of the body, for example in bad hooves (from where it usually spreads onto the animal’s side), around the base of horns, under the belly of male sheep and on the back and shoulders if the fleece is contaminated with bird droppings. When the maggots hatch they will quite literally eat the animal alive if left untreated, which must be an extremely unpleasant way to die.

The first evidence of flystrike appears as a dark, damp patch on the fleece, but in coloured breeds this is impossible to spot. Behavioural signs include turning and nibbling at the infected area. As the condition progresses large matted areas of wool will fall away, exposing the raw flesh beneath and the animal will become very obviously sick and lethargic.

If caught early treatment is easy and successful. However, advanced cases may die despite your best efforts. To treat flystrike, clip the affected area down to bare skin and clip a good way into the clean fleece surrounding the area as well. Treat the area with an appropriate pour-on, or maggot oil, and possibly administer antibiotics.

The best protection that you can give your ewes against flystrike is to shear them before the high-risk period. Also clip the bums of any dirty lambs and apply a pour-on as a preventative to the whole lot.