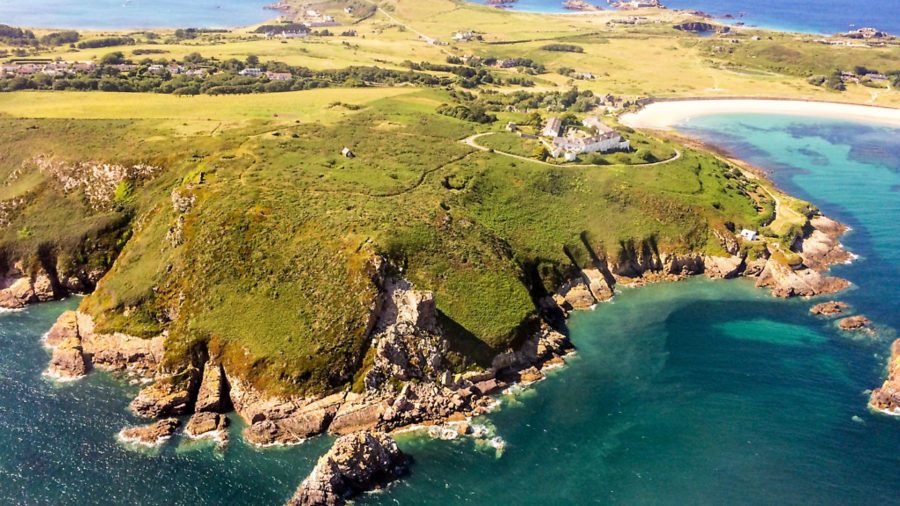 Smallholding on a Channel Island brings unique challenges — including the lack of a resident vet — but Alderney Free Range Pigs has gone from strength to strength over its decade in existence, finds Joanna Woodnutt 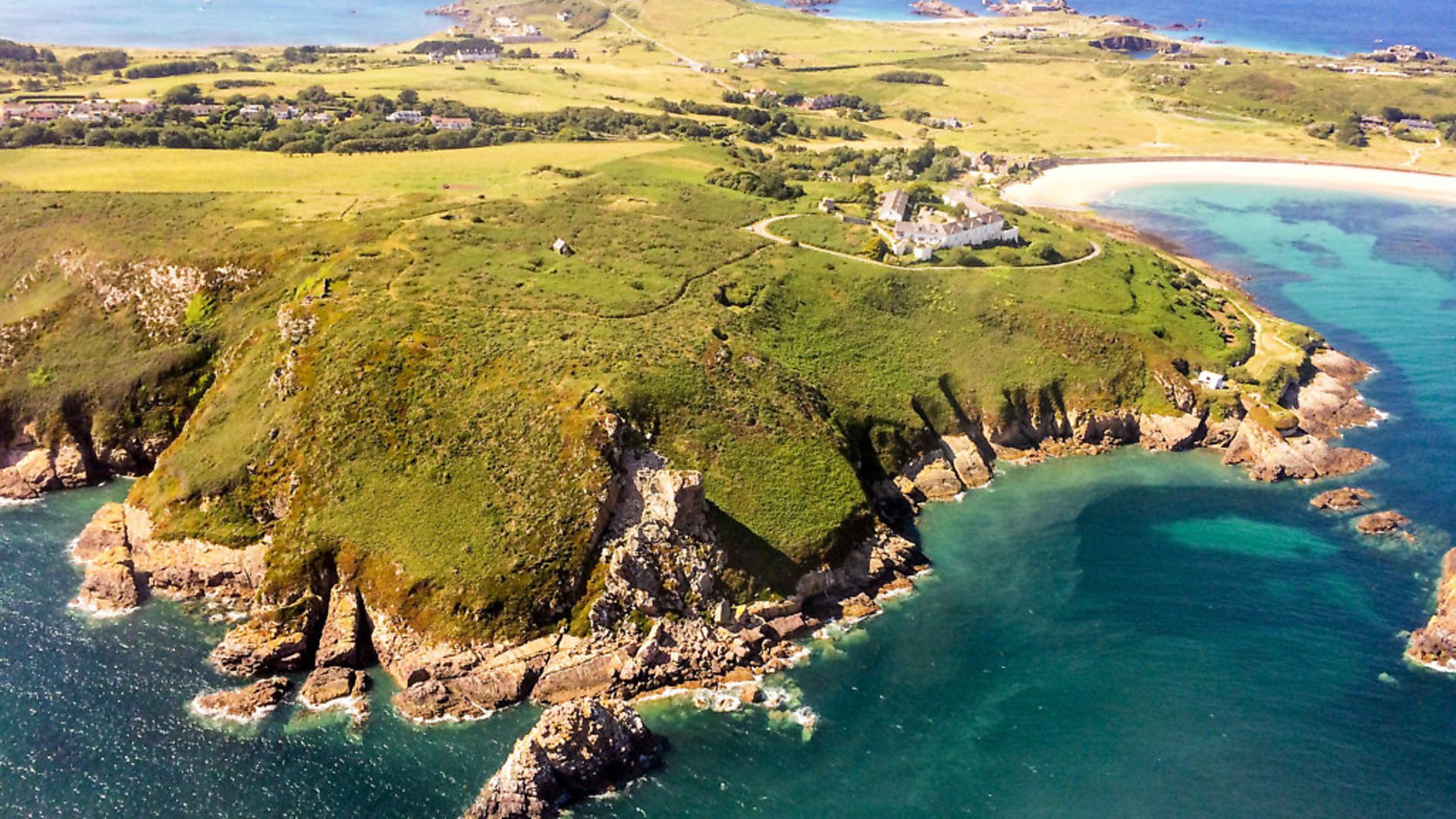 As I reach the crest of the hill, the morning sun starts to warm my back and I am presented with a stunning sight. The sea stretches into the distance and this morning it’s an inviting deep blue. I can see the Swinge — a tidal race that is one of the fastest in the world — by the white tips of water rushing through gaps in the rocks.

Closer, the bracken and gorse that carpet much of this tiny island give way to neat fields that are clearly carefully looked after. Lush grass is interrupted by a muddy wallow, and I catch my first sight of one of the pigs I’m here to see. Her ginger hair glints in the sun and she has an expression on her face that I recognise immediately. It’s that of an over-tired mother finally getting time to herself in the bath. The humanity in her expression makes me smile. I hear a little excited grunt from her piglets and they rush over for a look from where they had been snoozing in the long grass. They’re tiny and so cute I can’t contain a broad smile.

As I wait for Tess Woodnutt, the farmer, to arrive, I take a few minutes to walk around and soon come across a path that meanders along the cliffs. Thousands of gannets nest near here and the sound of their cries reaches a long way. The view from up here is stunning and I spot a little island out to sea — Burhou.

I head back to the farm just in time to meet Tess as she is about to feed the pigs their breakfast. I’ve arranged a tour of the farm and a chat with Tess about the difficulties of farming on the tiny Alderney, the northernmost inhabited Channel Island.

We grab a wheelbarrow each and head out along the path to the first field. The excited grunt from the first pig to spot the barrow almost drowns out Tess’ answer to my question.

“It all started because my husband, Alan, wanted a pig or two for the back garden,” she explains in reference to the early days of Alderney Free Range Pigs, which is sited in the Giffoine area on the west side of Alderney. “We quickly realised that because we were living on an island, it needed to be all or nothing. There are no other pig farms here so we can’t just buy porkers to rear. We have to breed them ourselves. We went on a pig keeping course and realised that it was something we really wanted to do.

“Our first pigs came in from the UK by boat. There was a young boar, a young gilt and a pregnant sow all in their trailer inside a container. They arrived in the middle of a force 8, giving the gilt her name — Gale.”

That was 10 years ago and since then the farm has gone from strength to strength. From those four pigs (and a few more shipped in along the way), Alderney Free Range Pigs now has up to 70 pigs at one time. All are Oxford Sandy and Blacks, and this farm has done its bit to boost numbers of this rare breed. 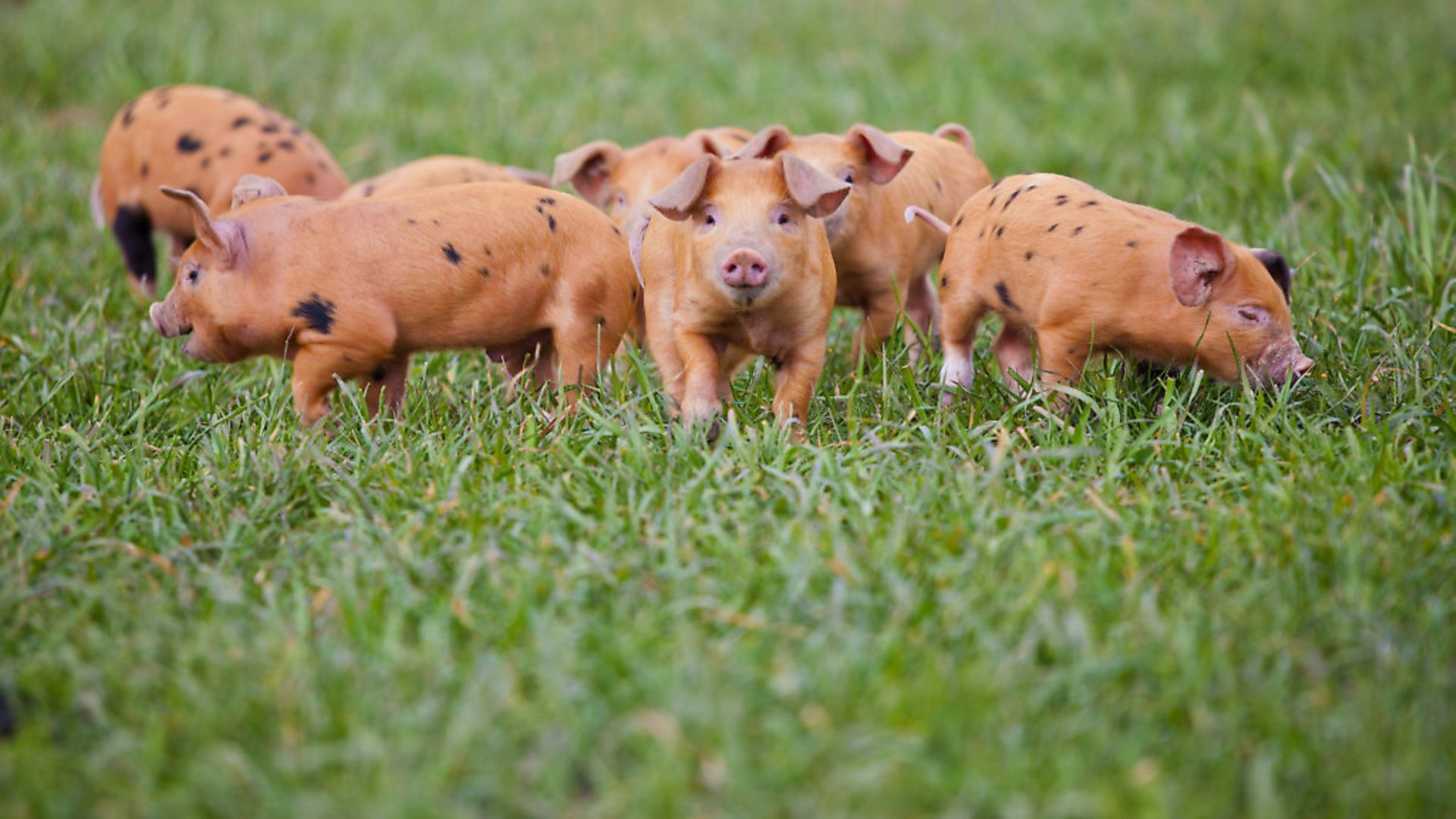 Over the years, Alan and Tess have had three of the four boar lines and four of the 13 sow lines here, forming a reservoir of good quality pigs. The couple sticks rigorously to the breed standard when choosing breeding stock, despite never being able to show their pigs due to quarantine restrictions.

“We would love to show them, but we just can’t get them to the UK and back. They’d have to wait several weeks in quarantine in the UK before returning.”

It seems that there are a few issues with starting a farm on a small island. As if getting livestock to set foot on the island isn’t hassle enough, feed costs are astronomical. Any concentrates are transported from the UK on a container ship, with delivery costs as much as the feed itself. Unfortunately, there is nothing grown on-island that is suitable for pigs. There is also no vet here — one visits every two weeks, so if an animal is ill Alan and Tess phone for advice and do what they can themselves.

I carefully measure out a scoop of feed for the sow with her piglets. She is now clamouring at the gate.

“These were born a week or so ago,” says Tess referring to the piglets. “Mum is Ivy, one of our older sows. She always has big litters. She’s very gentle and loves an apple.”

Tess throws one over the fence and proceeds to fill the water trough. She is also careful to ensure that Ivy has a muddy wallow in which to cool off. As we carry on walking and talking I look back to see Ivy contentedly climbing back into her wallow. They wean late here, with the piglets leaving their mothers at about 10 weeks rather than the commercial three weeks, so there is an older litter of piglets still with their mother a little further along.

After these are bigger pigs, far more boisterous than their smaller cousins. Tess points to one that she plans to keep for breeding, a handsome lad with a long body, neat hocks and black splodges over his rump. The rest will go to slaughter.

In no time at all the pig feeding chores are complete. As we wander back to the shed, Tess reveals her feelings during slaughter day. 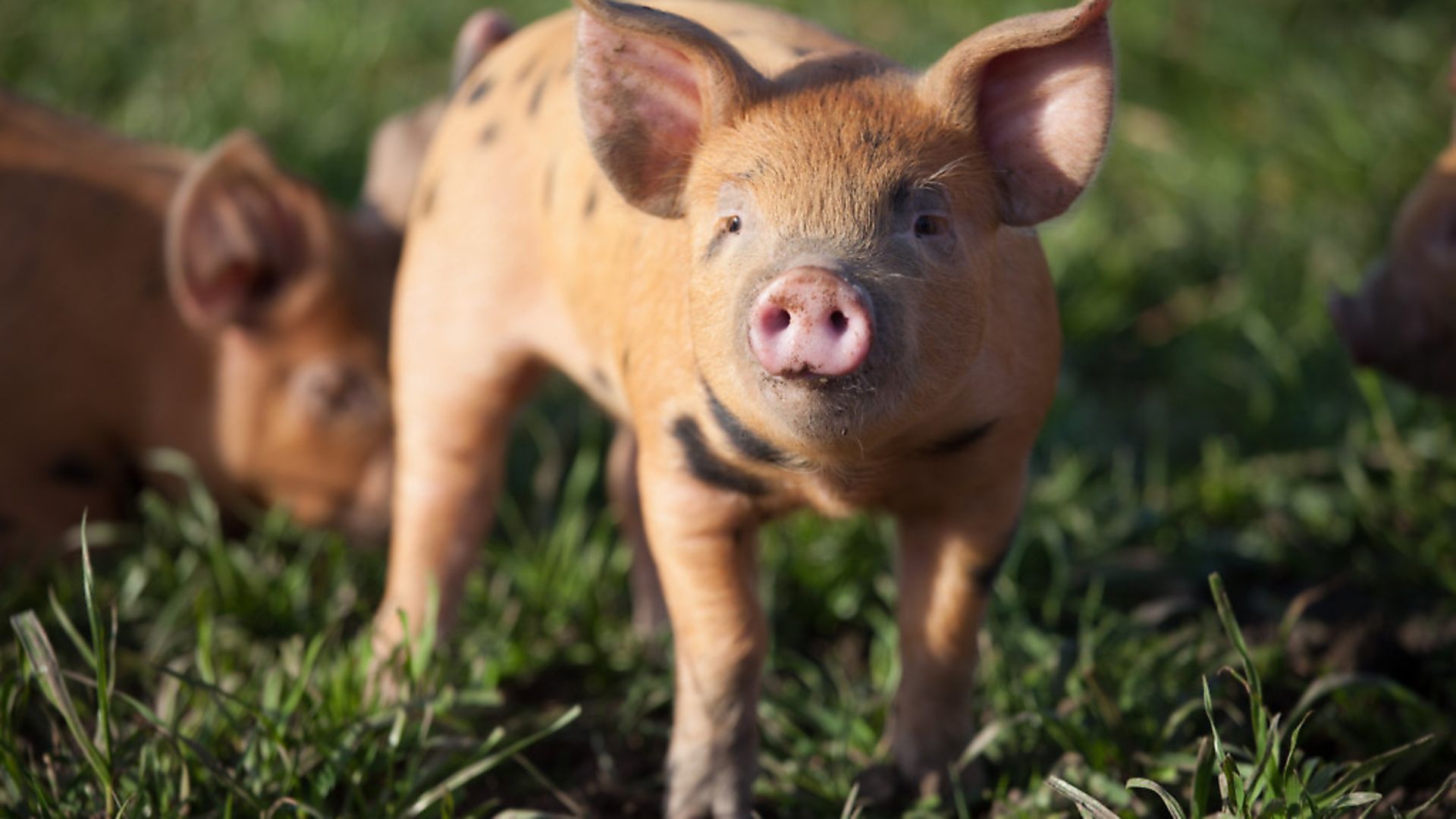 “I hate it. All of the pigs have their own personalities, and it’s especially hard when it’s an old boar or sow who’s been around for years. Still, they get it much better than on the commercial units in the UK — they travel less than a mile to the local slaughterhouse and get given an apple each to distract them when the time comes. We don’t take them until the abattoir phones to say they’ve finished with the cows and they’re ready for our pigs, so the whole process is as stress free as we can make it.”

Looking over the farm, its green pasture, muddy wallows and those glorious sea views and it is easy to see that these pigs lead a charmed life to the end.

Later that evening I head to The Georgian, a local restaurant, and check that the pork they are serving is local. The answer is yes, and owner Holly Chandler explains that they started a working relationship with Tess and Alan from the moment their pig business was up and running. Holly loves the fact that the pork is local, and she says that Tess will butcher the pigs into just about any cut the chefs ask for.

At the bar a local overhears our conversation and he tells me that the pigs have had a big impact on the island. He takes his granddaughter walking to see them every week. He reveals that they have even been added as a stop off for the tour bus. During Alderney Week the pigs are trained to come to the sound of the food bucket, then they are raced to raise money. There’s even a ‘pig club’, where residents feed the pigs weekly and get free pork in return.

A few days later, I’m walking down a tiny lane in search of Tess’ house, which is where her butchery is located. I find Tess and her butcher, Alan Bremner, heaving half a pig inside.

“This is actually our old garage,” Tess says. “We used to time-share a beef farmer’s room, but it’s at the opposite end of the island and it was a hassle arranging to use it, so we decided to build our own.”

Tess reads out a list of orders and Alan starts his work. He’s quick and methodical and before I know it the cheek and tenderloin are already being packaged for sale.

As they work, Tess talks about the different cuts. There are long bellies being sliced, shoulders being boned and rolled and hocks and tongues being packaged. Nothing is wasted and Tess explains how the sales work. Anything that doesn’t get sold goes to the local shops on a sale-or-return basis. Anything that is left when it gets to the best before date is frozen by the shop and returned to Tess for her to use. It’s a great system with one flaw. 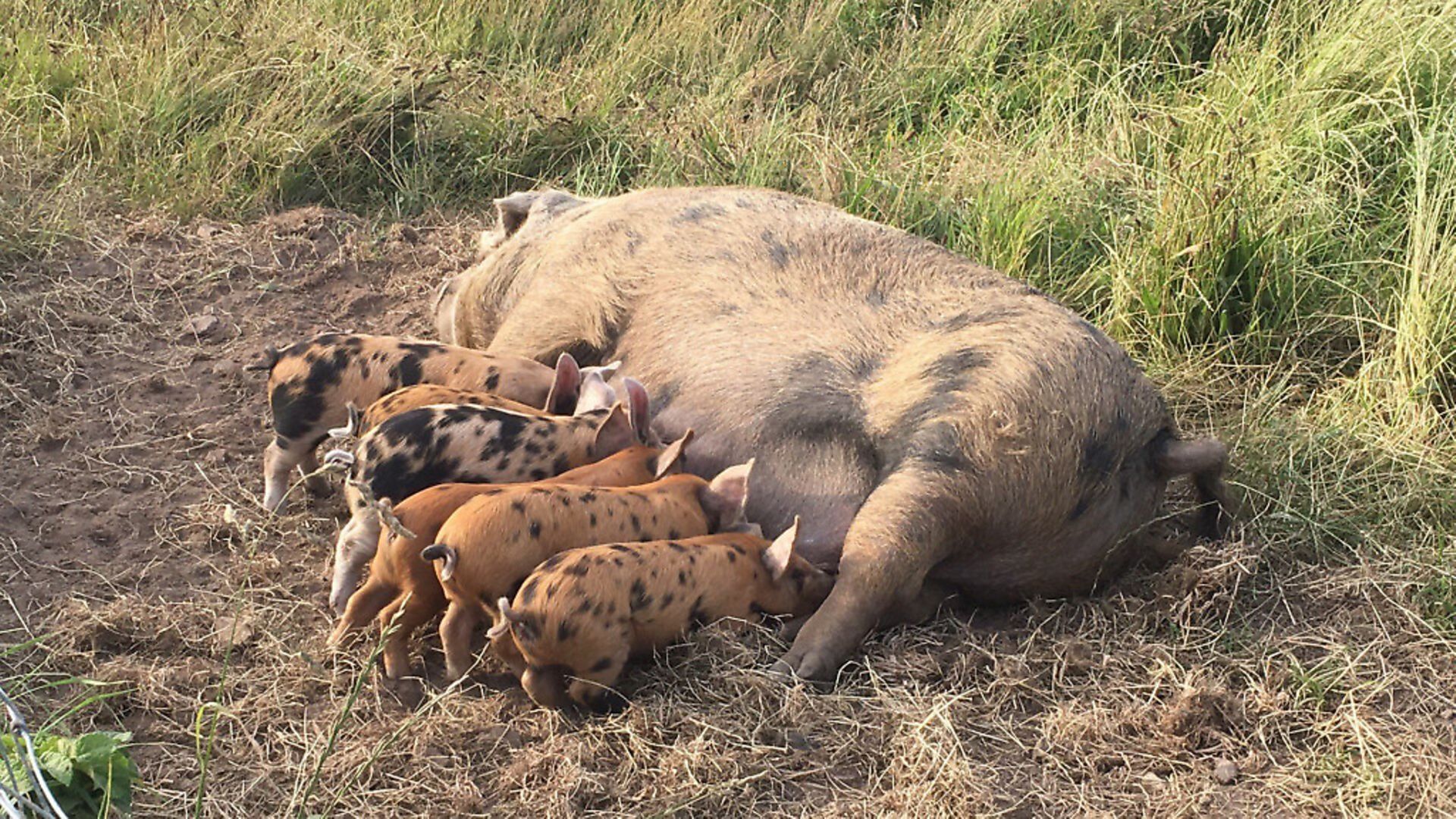 “I never eat pork,” Tess announces. “But then nothing ever comes back from the shop. It all sells, even the offal and the trotters. Every time I package up these chops I desperately hope for them to be unsold and get returned, but no such luck.”

We move on to the trim. These are the bits that have been trimmed off joints to neaten them up. There is 7kg of meat here, but again nothing ends up in the bin. Quite the reverse, plus I finally get to play on one of the big machines. I feed the meat into the mincer and collect it at the other side. It goes into making burgers, meatballs and even sausages.

“Which flavours shall we make?” Tess grins at my wide, excited eyes as I choose a classic pork and apple burger, spicy chorizo meatballs and leek and stilton sausages. The sausage making is the hardest, but despite the giggles I end up with an impressive hank of home-made chipolatas, although I cheated and got Tess to tie them for me. It is clear that she loves her role in Alderney’s small community and having the connection with the people she sells to.

“From delivery to delivery,” she smiles as she drops me off in town, the back of her little van filled with meat for the lucky locals.

It is the third largest Channel Island.

It sits in the English Channel, about nine miles from the coast of France.

The population is about 2,000 during the winter months, although this doubles at the height of the summer.

There are 50 miles of coastal paths to walk, including the one by Tess’ farm.

Other pigs, goats, rabbits, chickens, waterfowl and cows are kept on the island, producing meat, eggs and milk for personal consumption.

A small herd of cattle is kept by the Alderney Wildlife Trust for ecological grazing.

Alderney was occupied by the Germans during World War II, but all the islanders had by then been evacuated — apart from the local dairy farmer who wouldn’t abandon his cows.

After the war, Alderney was run as a communal farm.