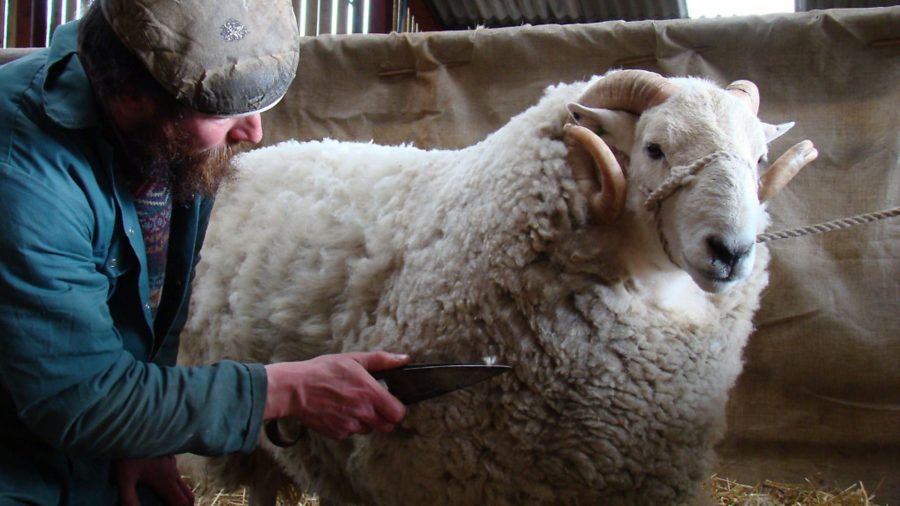 Local agricultural shows are the ideal forum at which beginners to the circuit can show their sheep, says Tim Tyne, who also advises on stock selection and preparation 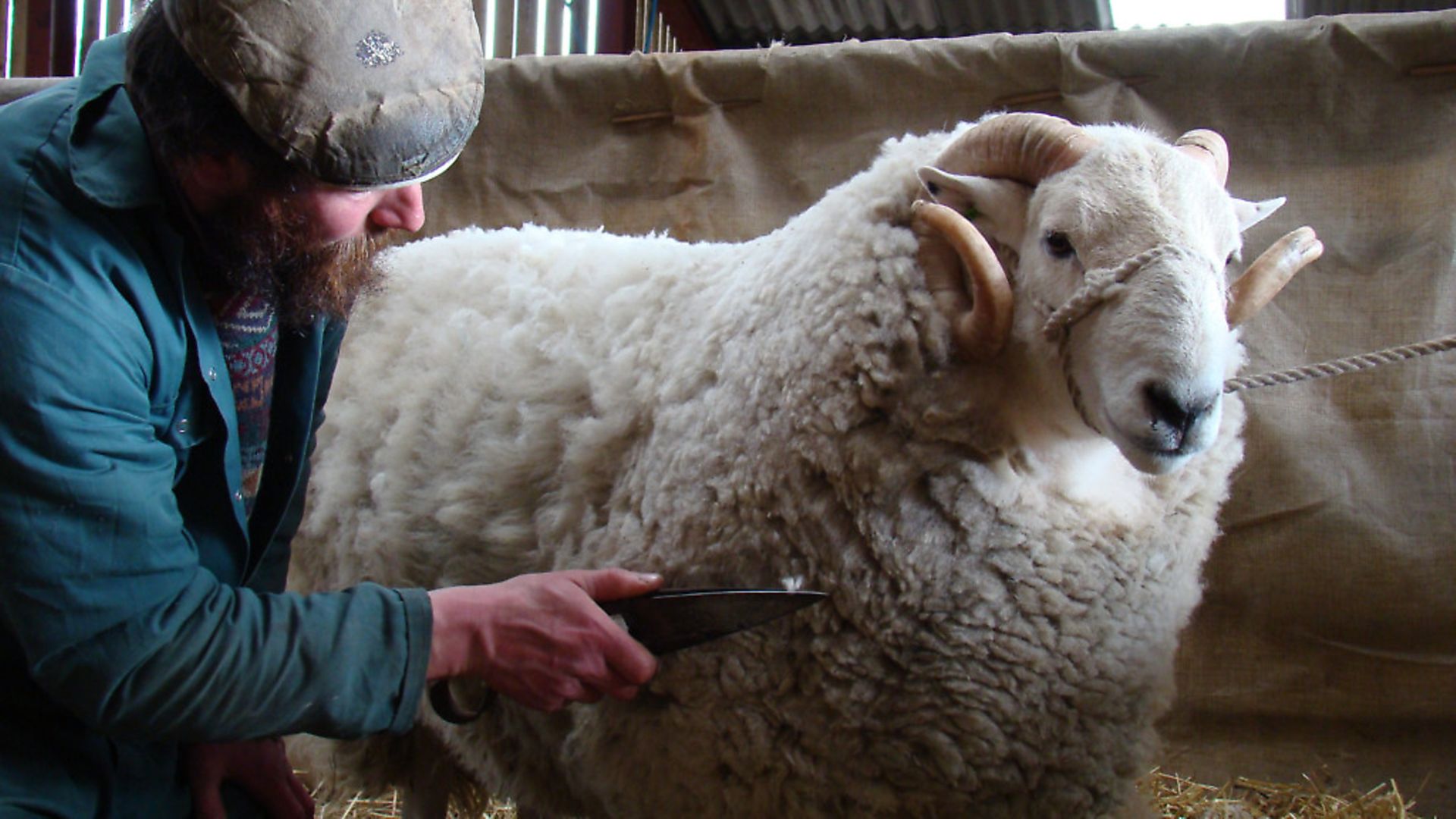 While most people — even those not connected to farming in any way — are familiar with the major high-profile agricultural events, such as the Royal Welsh Show, smaller local events are not so well known, or so well supported. Local agricultural shows have been a part of the rural scene for such a long time that it would be a shame to lose them, although many have struggled to survive in recent years as new legislation has imposed greater restrictions on the holding of such gatherings.

Smallholders, with their passion for a diverse range of livestock breeds, including picturesque native, rare and minority types, are absolutely key to the survival of the traditional agricultural show and these local events make a great starting point for anyone new to the world of showing. They tend to be quite light-hearted affairs, providing either a relaxing day out, or an intensely fought yet friendly competition, depending on your level of involvement.

Schedules are usually available a few weeks in advance, often to be found in a pile on the counter at the local feed merchants’ store. Regular competitors will probably receive a copy through the post or even — dare I say it — by email! Don’t be surprised if there doesn’t appear to be a section specifically for your breed as the categories are often fairly broad at small events in order to ensure that the class sizes are actually big enough to be worth judging.

Generally speaking, if enough exhibits of a certain breed are entered to justify being allocated their own section then this will be accommodated, but it might only be introduced after a few years of consistently high numbers of entries from two or more exhibitors. In the meantime, you might find classes such as ‘Any Native Lowland’ or ‘Any Hill and Upland’, each of which embraces a number of different breeds.

Quite a few of the smaller shows are unaffiliated, meaning that it is not necessary to be a member of the respective breed society, or even for your animals to be registered in the flock book of that society, in order to compete, which is a good thing in my opinion as it enables the event to be truly all embracing and gives total novices an opportunity to compete alongside more experienced showmen.

In addition to the livestock side of the event, there will be other competitions that enable smallholders to show off the produce of their holding and garden. These may range from classes for samples of hay and silage, through to vegetables, eggs and fruit, to flower arranging and baking. 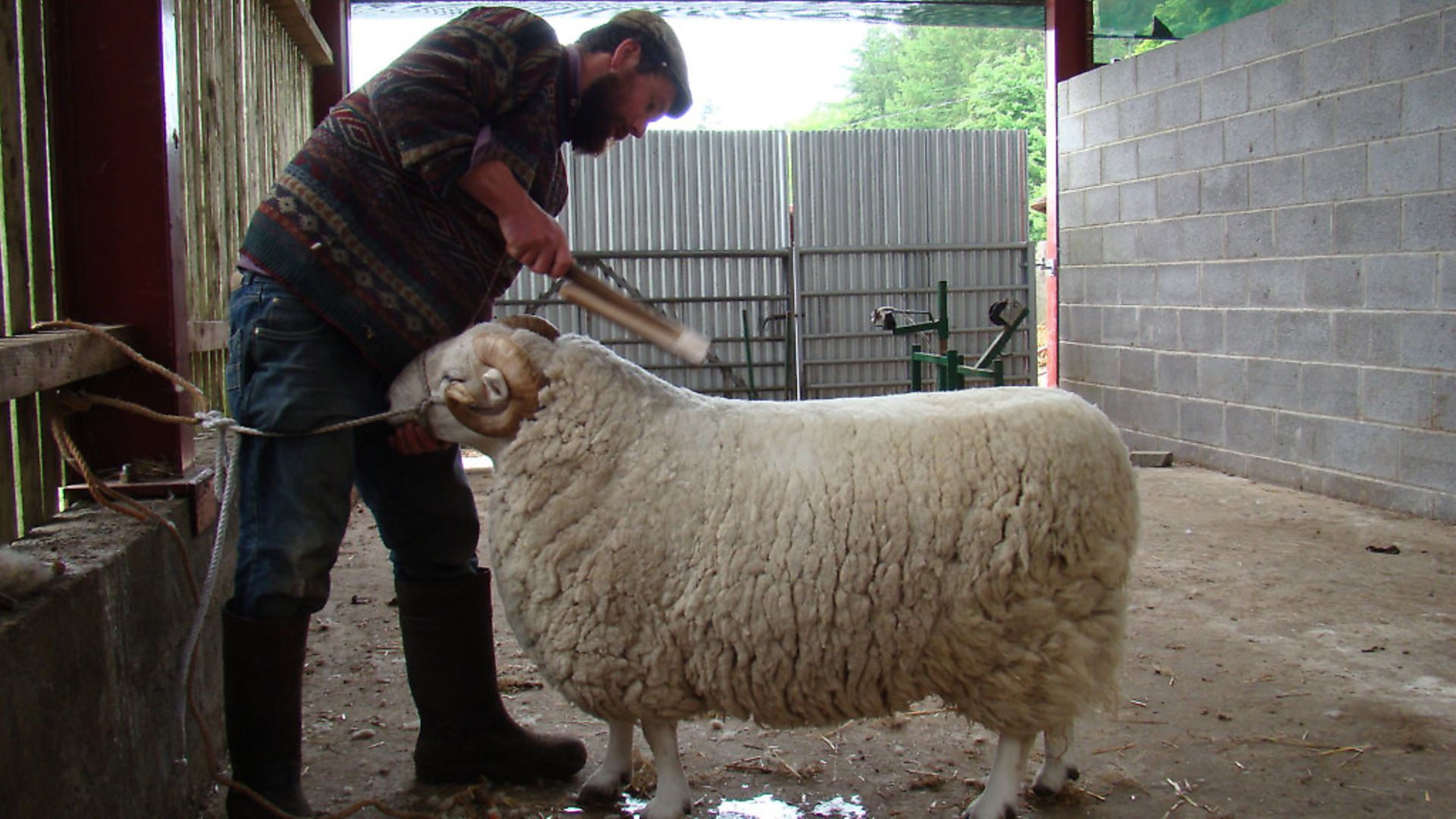 It goes without saying that any sheep you intend to show should be a good example of its breed, although minor imperfections that would exclude an animal from an affiliated event are likely to be overlooked at a local show where the emphasis lies more with getting enough competitors through the gates and having a good time rather than nit-picking over the finer points of selection.

Of more importance than the breed points, in my opinion, is the animal’s conformation. Even so, a perfectly well put together animal can be spoiled by over-feeding in the run up to a show, leading to the development of serious faults, such as poor pasterns and an incorrect bite, which will result in your animal being placed well down the line regardless of the calibre of the event. 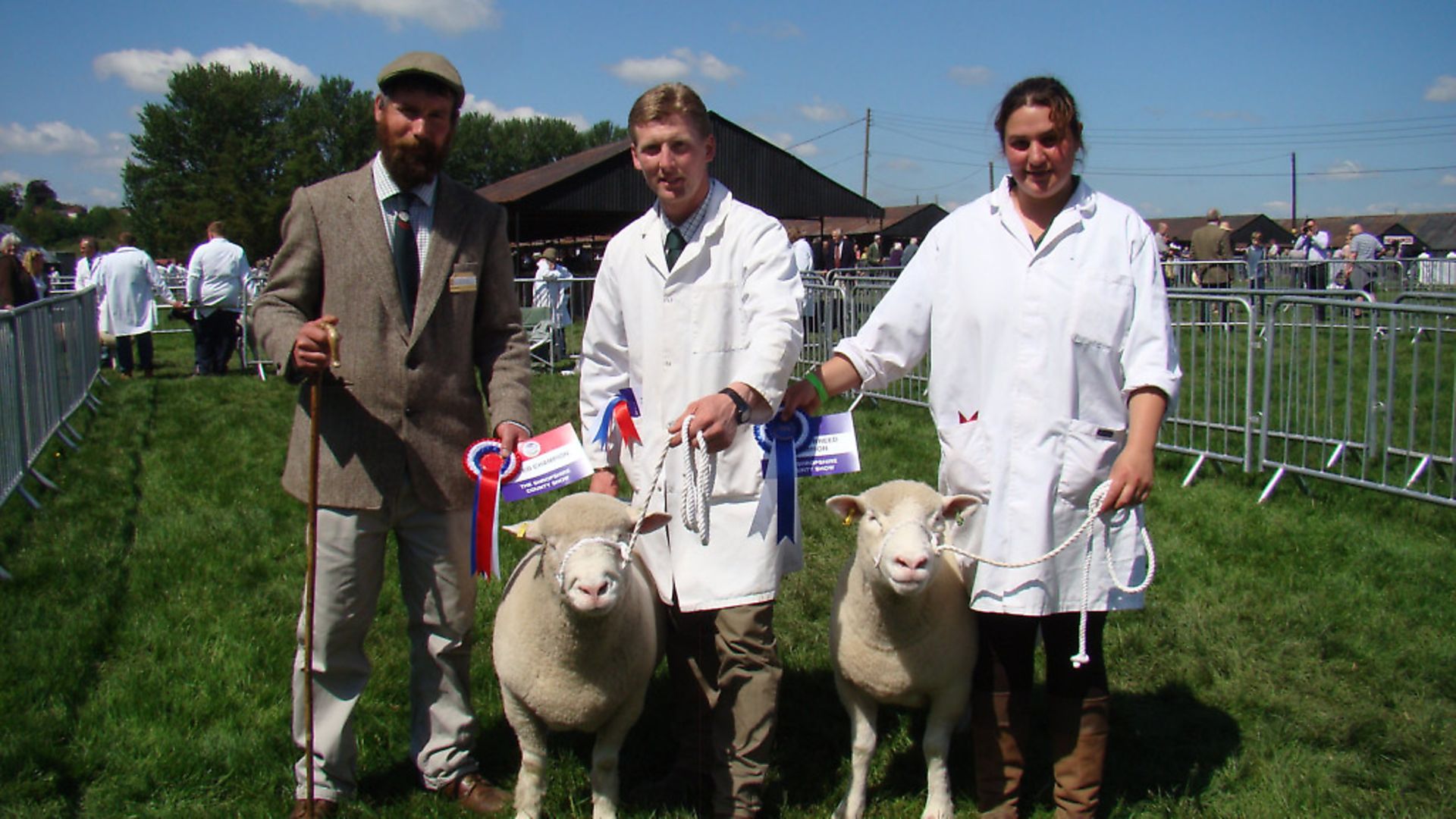 First and foremost, do your homework. Find out what is the norm for pre-show preparation of your chosen breed. For example, whereas clipping (to shape the fleece) for showing is commonly carried out in some breeds, in others it is frowned upon or even forbidden. The same goes for artificial colouring. Generally speaking, the downland breeds require the most feeding and preparation, while, at the other end of the spectrum, the primitive types of sheep are often shown looking rather scruffy and a bit on the skinny side. While I am by no means an advocate of heavy feeding and excessive titivation, I do think that the breeders of primitive sheep could do a lot to improve the image of their breeds by putting just a little more effort into show preparation.

True mountain breeds are usually just washed and brushed, but the ‘improved’ hill types may receive a certain amount of clipping (although not to the same extent as the down breeds). For the longwool breeds, show preparation involves painstakingly separating and tidying up each staple of the fleece by hand. There are also variations in the way that the different breeds are presented in the ring: most are shown on a halter (either black or white, depending on breed), but some types are customarily shown loose, or just held by a hand under the chin.

Pre-show clipping — if required — usually takes place over several days, or even a couple of weeks during the run up to a show. Firstly, the animal will need to be cleaned. This may involve little more than picking hay seeds and other debris out of the fleece and perhaps washing the haunches and around the backend, but some breeds are typically washed all over and shown very white. Once the fleece has dried off it should be carded, using a coarse comb, which fluffs up the wool into a uniform consistency and, incidentally, makes the animal look pretty dreadful!

Now begin clipping. It is a good idea to practice on a few sheep that you don’t intend to exhibit before getting to grips with the show team. Start by trimming the back down level, beginning with the shoulder and going all the way to the rump. Next trim from the front of the shoulder up the back of the neck. Keep all the surfaces fairly flat — the animal can be rounded off later if need be.

Now for the chest — keep this broad and square in a ram, but slightly more rounded in a ewe. After trimming the back of the neck and the chest, join these two areas together and trim down the front legs which completes the whole of the front end.

At the back end of the sheep now, tidy up the base of the tail, the sides of the hips and down in front of the stifle. On my sheep I leave the thigh area untrimmed and then comb it into shape, but for some breeds the hind legs need to be heavily trimmed.

Next I trim the sides of the sheep, joining together all of the areas so far completed.

This first clipping is primarily just to give the animal the basic shape that you want. Subsequent and repeated carding and clipping over the period leading up to the show will further refine the shape and firm up the fleece, giving a crisp dense feel.

On the morning of the show, finishing touches include spraying the fleece with a lacquer and patting it all down and giving the animal’s face and legs a good scrub with an appropriate shampoo. On white breeds, you might also want to hide any blemishes (such as scuffed/stained knees) using tennis shoe whitener.

Be ready to enter the ring as soon as your class is called. At small local shows there may not be a ‘ring’ as such, just a clear area between the rows of pens. Wear a white coat if circumstances dictate and, if you have been provided with an entry number, make sure that this is clearly visible pinned to your coat. Always lead off the left hand side and take care when moving around the ring not to block the judge’s view of your animal.

Initially all of the competitors will be lined up in random order (or possibly by catalogue number), but the order will be refined as the judge handles each animal and begins to make a shortlist. In large classes, exhibitors not drawn forward into the initial shortlist may be asked to leave the ring. Some judges may ask for sheep to be walked, or even turned loose, but the majority of the decision making takes place with the animals held on halters. Don’t relax at any point during the judging, even after the judge has apparently passed you by as he will often look back to make a comparison with another animal further down the line and if he does so your exhibit must be posed to catch his eye. Above all, keep smiling.

If you are fortunate enough to win, then that’s all well and good, but don’t let it go to your head. It is, after all, only the opinion of one person on one day and you might not be so lucky next time.

Whether you net a rosette or not, it is always worthwhile having a chat with the judge afterwards to find out why he placed you where he did, as knowing what a judge is looking for will stand you in good stead next time. And, believe me, there will be a next time because after your first show you will be hooked.

Maedi visna (MV) is a highly contagious viral disease that affects both the lungs and the nervous system of sheep. It has a long incubation period (up to four years) and so by the time an outbreak is confirmed a large proportion of the flock is likely to be infected. Accredited flocks will have been regularly tested for, and found to be free from, MV as part of a flock health accreditation scheme. Some breed societies (mostly terminal sire breeds) encourage their members to attain accredited status and others (hill breeds, rare breeds, primitives, etc) do not. At shows and other events, MV accredited sheep must be kept apart from non- accredited, with different areas used for housing/penning, and separate rings. In inter-breed competitions, where both categories of stock may be competing against one another, the judge must wash his hands as he moves from ring to ring.

If you are a regular successful exhibitor at your local show then it is almost inevitable that at some point you will be asked to take a turn at judging. Even at a small event this is quite an honour, so do go about it in a professional manner.

Some points to bear in mind are:

1) Make sure that you are reasonably smartly dressed (and/or slip on a white coat).

2) Get to the show in plenty of time and make yourself known to the stewards, but don’t go to your section until the appointed time for judging.

3) Don’t engage in conversation with individual exhibitors, beyond what courtesy dictates, until all the judging is over.

4) All competitors must feel that their exhibits (be it sheep, poultry, cakes, handicrafts or whatever) have been fairly and thoroughly assessed.

5) You must be able to justify your decisions.