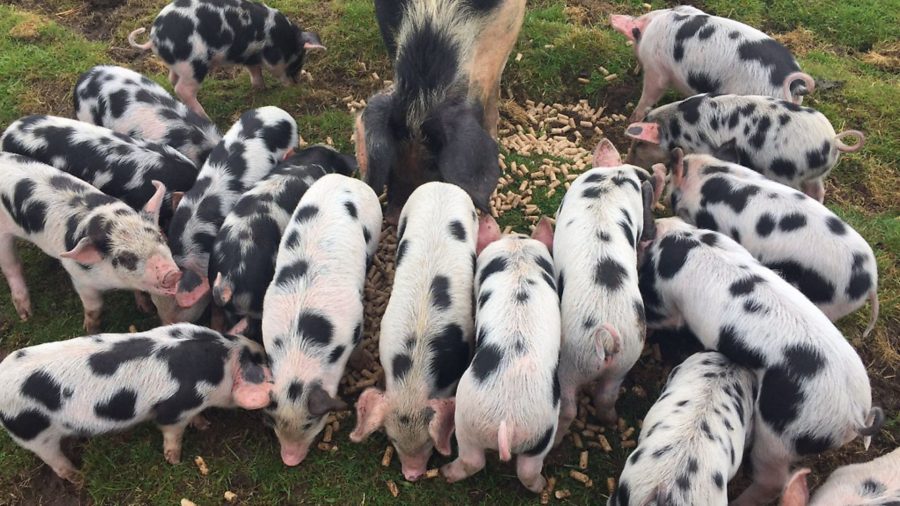 After a hugely successful lambing and a disastrous calving, it was the pigs and piglets that brought the 2017 birthing season to a close. Two sows and a gilt had been with the boar, with the gilt and one of the sows producing 20 lively piglets, within four days of each other. The farrowing went well and I was on hand for both of them. There were a couple of stillborn piglets, but I have learnt that this is to be expected. I moved them outside after around a week and unfortunately lost one piglet, due to its mother lying on it. Again, these things happen and I try not to think about it too much. I’ve been really happy with how they have been growing and exploring the croft. The inquisitive nature of piglets means they are such a joy to be around, particularly in their first few months.

After a few months, however, it is time for them to move on, and that’s what I did with four porkers that were born late last year. Because our local abattoir is only open September to December, it meant a mainland trip for these ones. I had left my small trailer in with them for a few weeks beforehand, so that they would get used to it and not be stressed by it before their travels. The night before they left, I set up cattle hurdles around them, to make things easier in the morning. I had to leave home at 5.30am to catch the 7am ferry, travel two and a half hours across The Minch, followed by a 50 mile road journey, before they reached their destination in Dingwall. The Dingwall abattoir has a chill lorry delivering to Lewis each week, so I received my butchered pork that way and delivered onwards to the final customer.

A week later, I was off on my travels again, this time heading to Glasgow and Edinburgh to deliver the pork to customers. I have been keeping an eye out for a refrigerated van for a while and spotted one near where my brother lives in Glasgow. He went, had a look at it and now I have my own fridge van! It was put to use straight away and proved itself. The deliveries went smoothly and feedback has been great, so I will definitely be doing this again.

Many people ask why I don’t just sell the meat locally, instead of going to the mainland. I do that too, but locally reared meat is readily available at home and, in my experience, the island market looks at price before provenance. The customers I have in the Central Belt of Scotland are more than happy to pay a premium for quality produce, even after delivery has been taken into account. I think it is important to know your market and who you want to target. I have started out very small, just selling to people I know, but word of mouth is growing that market all the time.

Out in the peats

I introduced some of our work in the peats in my last article and promised to go into some more detail this time round. My father, brother and I have spent a good few days out in the peats, lifting them and starting to take them home.

The peats were cut in mid-May. Traditionally this is done with a tarasgeir, a peat-cutting iron, but in recent years, we have employed a contractor who has a specially designed bucket on a small digger (www.peateater.uk). This takes a lot of the labour out of the peats, especially since my dad injured his leg in a fishing accident in 2005. The resultant peats are very similar to the traditional method and the drying/lifting stage is identical.

The freshly-cut peats are left to dry for a few weeks and when they are deemed dry enough, they are ‘lifted’ off the ground, to allow them to dry completely. We build wee houses with the peats, that allows the wind to get to most of the peat’s surface and also raises it away from the wet ground. You can see my brother Innes lifting some peats in the attached photos. This might look relatively easy, but it is hard on theback and hamstrings! These days we tend to go out for an hour or two at a time and do as much as we can, but in the past families would have been out all day long, lifting their own peats and helping their neighbours.

If the weather is dry, the lifted peats could be home within a fortnight. We usually get a lot of rain in the second week of July, so we try and have ours home by then. At home, they are stored in a peat-stack, which is built in such a way as to repel rain and keep the majority of the peat dry.

The cutting and use of peat here nose-dived in the 1990s, when a lot of people switched over to oil central heating, but as heating oil increased in price, peat-cutting has had a bit of a resurgence. The blacksmith in Stornoway, the main town on the island, has been busy making blades for the peat-cutting irons, something that he hadn’t done for the best part of a decade.

It’s hard work but the end product is well worth it, you can’t beat a good fire in the winter!

Where does the time go?

I have been fortunate enough to get a sabbatical from my day job for the summer, meaning that I have been able to concentrate on getting the croft and the business to where I would like them to be. I thought this would mean a long, hot, lazy summer – boy was I wrong!

I’ve been as busy as I’ve ever been, and I’m not sure how I managed to do any of this, while working at the same time!

After the success of lambing, something had to give. Unfortunately, that was calving. Both my Highland heifers were with an Aberdeen Angus bull last autumn and only one of them ended up in-calf. It broke my heart to find that calf stillborn, one beautiful summer morning. I don’t think crofting had ever left me feeling as low as I did that day. I had been so excited about my first ever calf, and to find it dead was devastating. I felt for the heifer too, but she has recovered well and will be back to the bull shortly. I also had to BVD test the cattle for the first time since I got them. That was the first time I had handled them, which was quite a nervous experience!

As I write this, I am preparing to head south, to the neighbouring island of North Uist, where I am selling some weaner pigs and returning with a third Highland heifer. I’m looking forward to this and getting them back to the bull as quickly as I can.

Otherwise, things have gone quite well on the croft. We got the sheep shorn in early July, with myself and two neighbours helping each other. I always enjoy these days, as a lot of the croft work tends to be on your own, so communal working is always more entertaining.

There are always some extra hands around in the summer months too, with students home for their holidays, so my brother Innes and cousin James have been roped into helping out – sometimes they need a lot of persuading though.