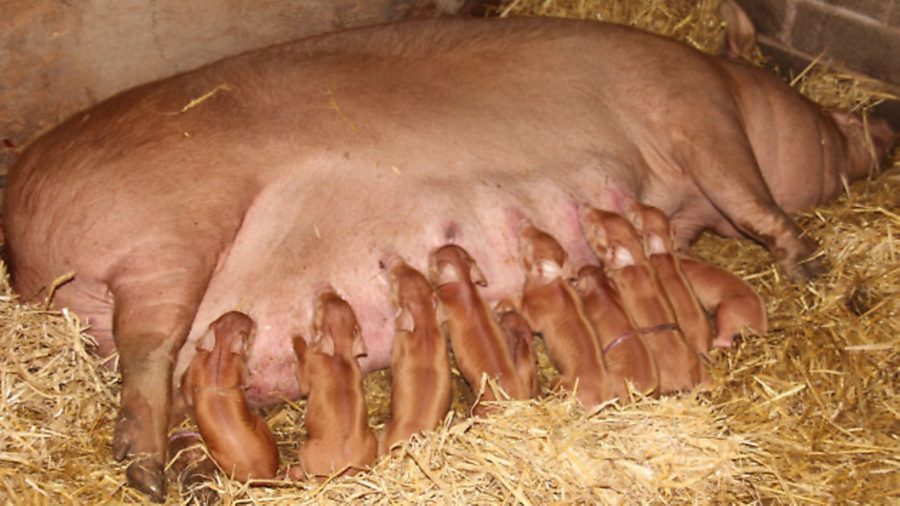 Q We recently decided to start breeding pigs and our sow has just produced her first litter. She had six, which we were very pleased about, and all are doing well.

One thing that puzzled us was that, even though she has 14 teats – and so plenty to go round – the piglets don’t use them all. They seem to prefer sticking to the same ones, and now the unused ones appear to be shrinking back. Why are the piglets so fussy?

A Liz Shankland says: One of the fascinating things about pigs is that, unlike any other animal, they establish ‘teat fidelity’ – a preference for a particular teat or pair of teats – within hours of birth. You will probably have witnessed a few squabbles while the piglets were sorting out who got to suckle where. They normally sort themselves out pretty quickly, but there are always a few who lose track of where they are supposed to be and then cause a bit of noisy disruption while they find their way back.

You may have noticed that the teats nearest the front legs of the sow seem to get snapped up first. It used to be thought that it was simply because these (anterior) teats produced the most milk. However, one interesting piece of scientific research I read lately was that they may be more attractive because they produce more colostrum – that vital first milk, which is high in protein and nutrients and contains the antibodies required for disease resistance. Scientists found that those piglets suckling from teats further forward grew faster and were more resilient than those consigned to teats further back.

Must I tag the pigs again?

Q I bought two weaners this spring and they are now ready to go to the abattoir. They already have a tag with their original herd number so do I have to tag them again with mine? The abattoir is insisting they are tagged with MY herd number – is this right?

A Debbie Kingsley says: This isn’t a situation that occurs that often as under 12 months of age a pig can travel from holding to holding on a temporary mark – a stripe of stock marker spray visible for the length of the journey. The new owner then simply tags, tattoos or slapmarks their new weaners with their own herd number either on arrival when they are small and easy to handle, or at the latest by 12 months of age or prior to going to the abattoir, whichever is sooner. However, a few breeders are (unnecessarily) tagging their meat weaners prior to sale.

Defra’s written guidelines are open to misinterpretation so, to be absolutely sure, I spoke to Defra and they have clarified the situation. The abattoir is right. If a pig has another person’s ear tag on (i.e the breeder/seller had already tagged their pig before you bought it) and you are taking it to slaughter (or a move to a market) it must have YOUR herd number on (whether slapmark, tattoo or ear tag). Wherever possible, you should try to remove the old tag and replace it with your own. If the removal will cause a welfare issue you should contact your local Animal Health Officer to discuss, take a note of the person being spoken to and get the detail of what was agreed confirmed by email. Of course, people who have bought in slapmarked/tattooed pigs won’t be able to remove these marks.

Defra has noted my request that their guidance needs to be improved and with more examples explaining what’s required in various scenarios as is already the case with their guidance on sheep and they will take this into account as part of their current exercise on updating the pig keeper guidance on the gov.uk website.

Mixing chickens and other poultry

Q Do chickens integrate well with other breeds of poultry?

I’ve heard guinea fowl can be bullies and ducks are too messy for a chicken’s liking. What about geese, pheasants, peacocks…?

A Anne Perdeaux says: Chickens are often ranged with other poultry, but there is no quick answer as to whether all birds will get along. Even mixing different breeds of chickens can lead to problems if assertive types are kept with more timid varieties. There are similar differences within most other poultry species, some being more territorial than others. Males, in particular, can become aggressive, in which case cockerels, with their sharp beaks and spurs, usually come off better than drakes.

It’s important to be aware of the possibility of disease transference between different types of poultry. Some diseases can be carried by one species with no ill effects, but are fatal if transmitted to another. A good worming programme is also essential.

Even if they range together, it’s often easier to house different types of poultry separately, according to their varying needs.

Feeding mixed poultry can be tricky, both to prevent the different birds from eating the wrong rations and to make sure everyone gets a fair share. Geese tend to take precedence in the pecking order and will eat more than all the others put together!

Waterfowl do make the ground muddy, as well as the drinking water. They need extra water in which to clean their heads and preen – this shouldn’t be deep enough to pose a risk to non-swimming birds like chickens.

Guinea fowl can sometimes be bullies, especially to cockerels and new birds. Pheasants and peafowl may also be assertive, but in all cases much depends on the space available. The more room they have to go about their own routines, the more likely the different species are to live happily together.

Q I haven’t noticed my nanny being in season at all – what are the signs and how can I encourage her to come in?

A Anke Sieker says: If you do not keep your own stud billy it may be quite difficult to detect a female in season. Some goats shout and even scream incessantly for 48 hours, and others will be completely silent, except for a quiet moan once in a while. The main sign however is the characteristic ‘swishing’ of the tail, a damp and pink vulva and, if she is penned up with another goat, there may be some fighting and pushing about.

Get in touch with the person keeping the billy and ask him/her to send you a billy rag – an old piece of towelling that has been liberally rubbed over the boy. It will be very smelly! Double packed in plastic bags it can be posted without any external odour– just don’t tell your postie what you are expecting! Every morning take the rag out and let your girl have a sniff – if she is in season she will wag her tail and get all excited. If not, it is most likely that she will try and eat it… Keep the rag in a closed container; otherwise the smell will slowly disappear.

A similar route is to ask for a collar, which has been worn by a male for a while, and put it onto your female. That will encourage not only her, but also her stable mates to come into season. Your goathouse will also have a strong whiff of billy goat…

What mating age for sheep?

Q What age would you recommend for a first joining of ewes (ewe lambs)?

A Tim Tyne says: Generally sheep are first mated in their second autumn – at about 18 months of age. However, ewe lambs can be bred from in their first year, provided that they’ve reached 60% of their expected adult weight by tupping time. When breeding from ewe lambs it’s a good idea to leave the ram with them for one cycle only (i.e., 17 days), otherwise the ‘teaser effect’of the ram’s prescence will bring the less mature lambs in the group into oestrus, and they’ll be mated, when really they’d have been better off remaining empty.