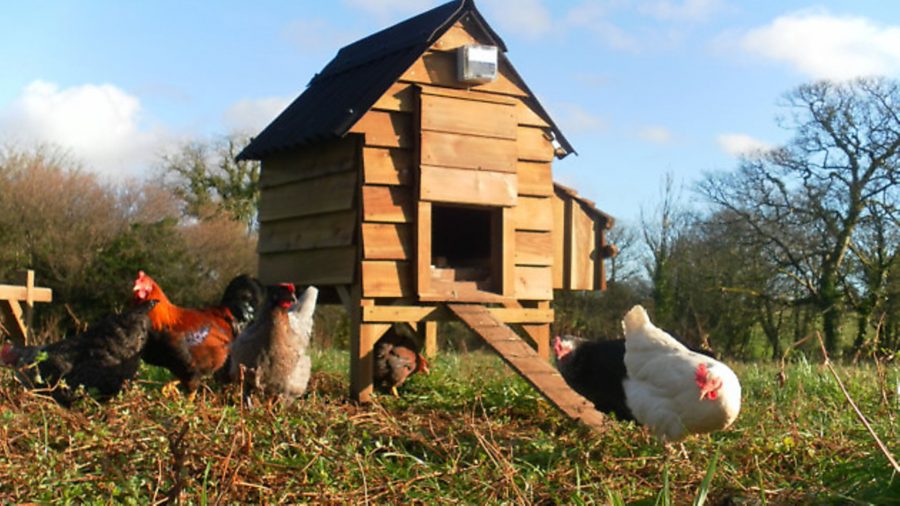 Meet Tom Vaughan, a skilled craftsman whose chicken houses are a big seller. He talks to John Wright 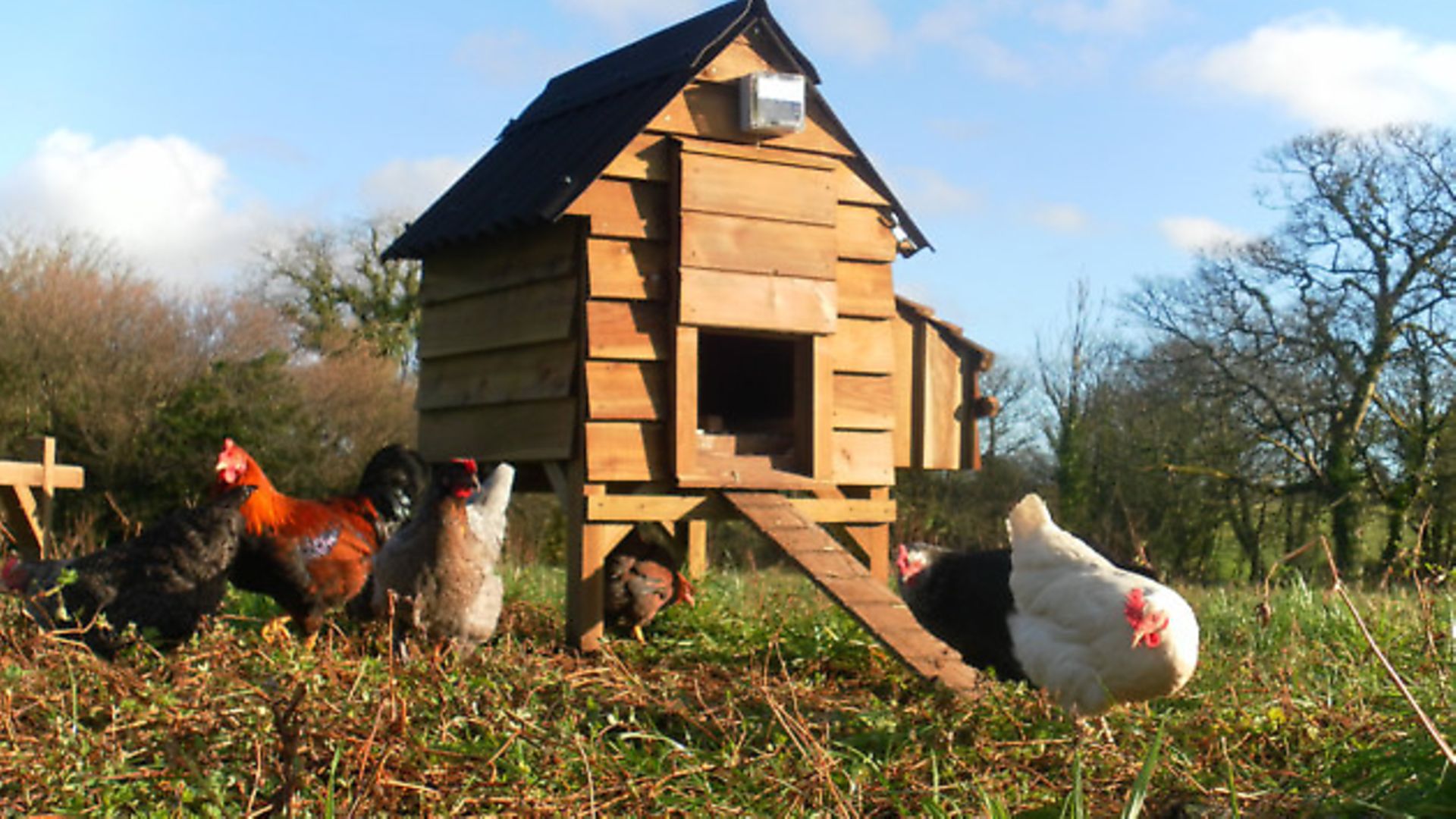 Tom Vaughan has lived among chickens for as long as he can remember. “I was about four, and my twin sisters were two when our parents first got hens for our back garden in a village in South Devon,” Tom tells me from the Cornish hamlet of Ruthvoes, six miles from the surf beaches, where he now lives with chickens of his own.

While his wife Leonie, who has worked in TV production and now physiotherapy, is happy to keep a safe distance from the chickens, Tom explaining that she is “freaked out by their dinosaur feet”, their two young children observe the passing feathery scene and are yet to say what they think of it all. Just as smallholders have various skills, Tom’s affection for poultry and ability with wood has meant he has been able to design and build their houses.

Who better to design a door for chickens, or a floor or ramp, than someone who watches them use them daily? A design technology teacher who taught full-time for two years, Tom introduces himself perfectly on his website, where so often businesses show all their wares but forget to say who they are – it is one of the best ‘About’ sections I’ve read. 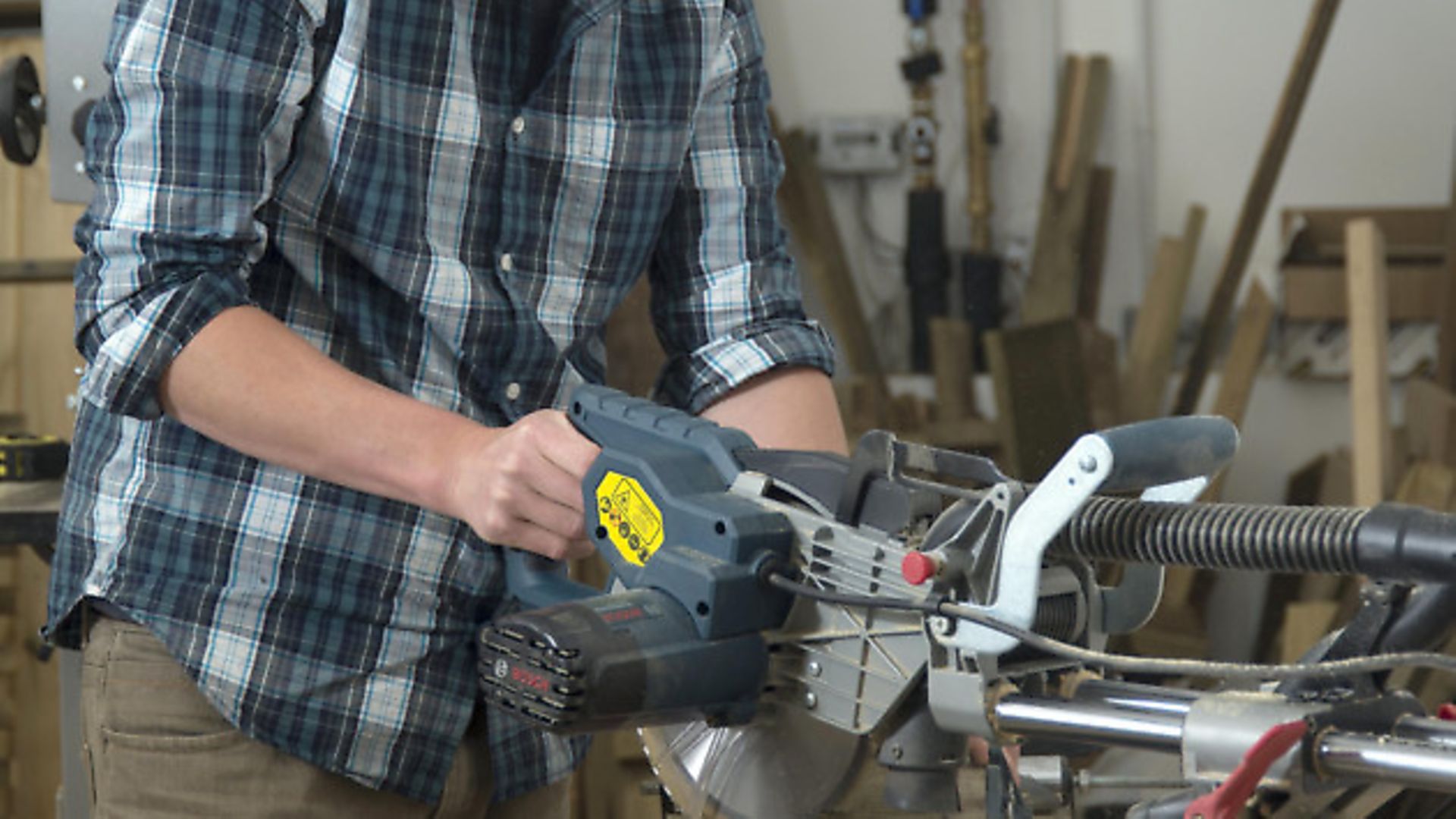 Tiptoeing out of the classroom in 2008 for long enough to travel to Morocco with Leonie, Tom felt drawn to another life. “I decided it was now or never. I have always been inspired by my father’s skill as a silversmith and I longed to work with my hands.” Hen houses soon followed when he noticed that his parents could do with a new one. “It was based on a design we developed around the kitchen table,” Tom says. “The result created such a buzz amongst friends, neighbours and Dad’s customers that I decided to build a few to display at local agricultural shows. They were a big hit.” He has never looked back since.

The first six chickens Tom’s parents bought were mainly for eggs – he remembers his mum, a legal secretary, selling them at work – and family entertainment, their number growing to 20 by the time he was a teenager. He loved helping his dad build stuff in their back garden. “I grew up basically on a building site. Dad built an extension on our house and I helped; at least, I think I did!”

The very things that Tom noticed were wrong with his parents’ old hen house are precisely what he’s careful to avoid in his designs today. “It was rat heaven,” he explains, “because it lay on the ground mounted on bricks so they could crawl underneath. Getting in to clean was a problem. Its pop-hole was fine, but its little door was too small and the roof was too low. The perches and nest boxes were fixed, making it harder to clean and, although they’d never had a red mite problem, the plywood and felt roof made it an ideal breeding ground.” 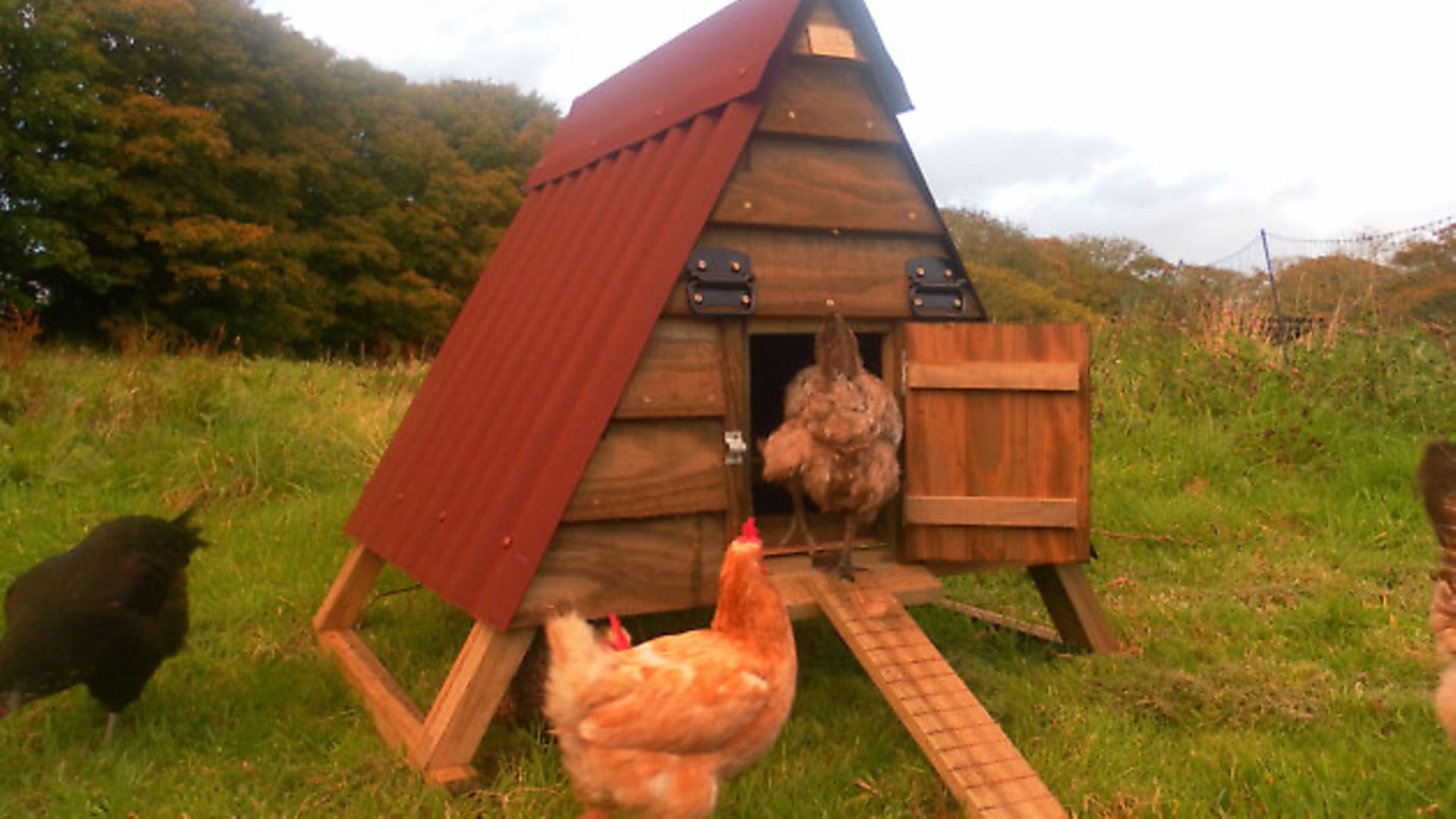 To some, it would have been a mission impossible, but Tom decided to accept it. “You solve the rat problem,” he says, “by elevating the house to a foot [30cm] above the ground.” You can see underneath, the grass keeps growing and the hens can shelter. It’s a manageable height for poultry keepers. That first house was 1.8 metres long and easily cleaned out with a hoe and swept, with a barrow at one end. The nest boxes were loose so they could be cleaned separately, and the perches were removable.

Tom designs hen houses today as a one-man band. He uses pressure-treated home-grown Douglas fir, as it is extremely durable and excellent quality from the local sawmills he uses. The sturdy frames are lined with feather-edge shiplap or waney edge cladding. For roofing, Tom uses corrugated Onduline, made from recycled cardboard and bitumen, or cedar shingles.

Of his own 20-30 hybrid hens, five are pets and the rest are sold as point of lay hens (mainly Marans and Redco breeds, at 19 weeks) which he buys at 10 weeks from an organic chicken producer in North Devon. When a customer buys a hen house from Tom, he sometimes provides a few hens as well. Unsure if it’s common practice, he says it is “a definite selling point”. 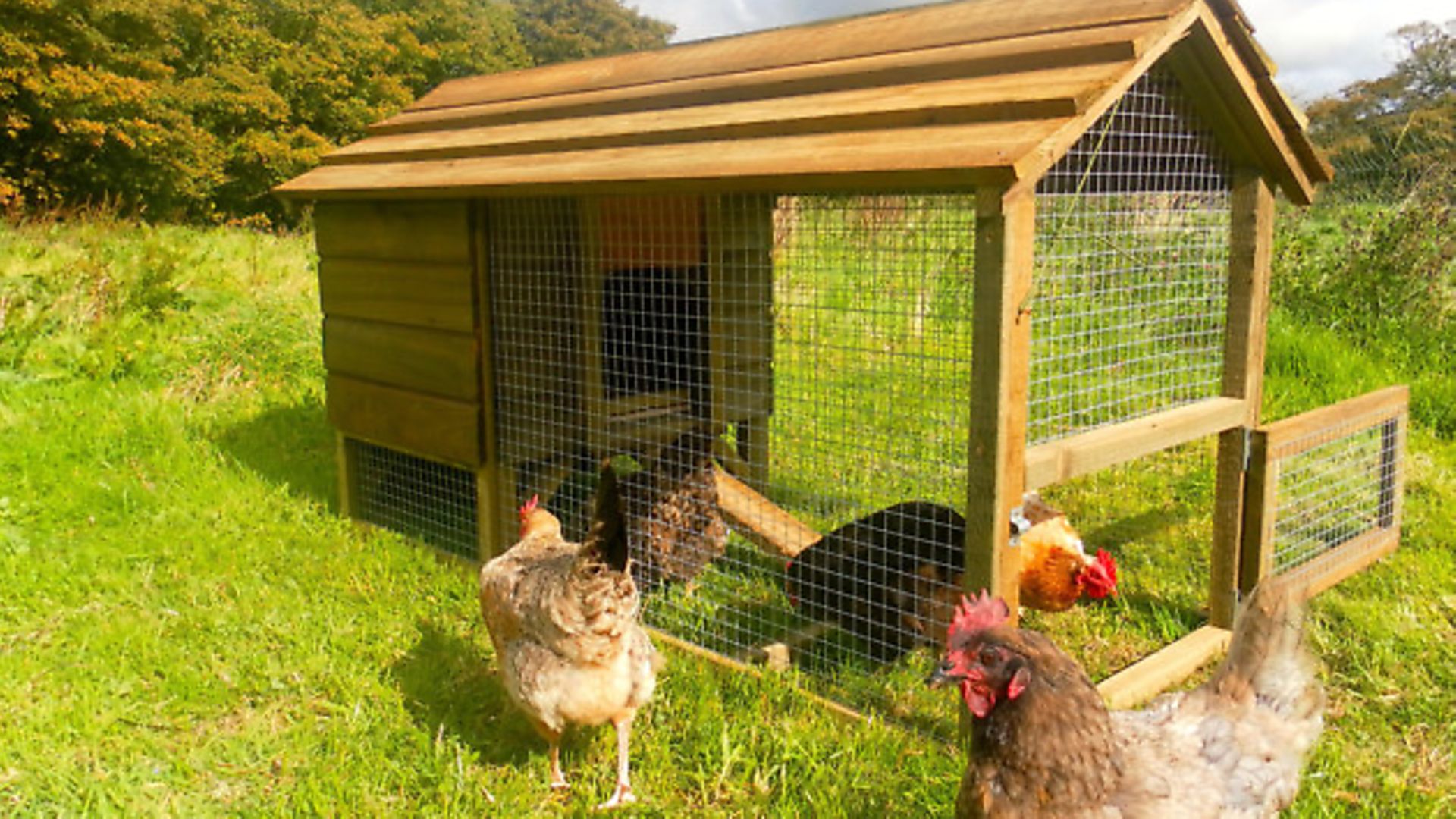 Tom’s start in a hen house business was his nervously taking four to the Yealmpton Show in Devon. He sold them all. People would ask him for a hen as well, and he thought ‘why not?’. An interesting turn of events came in 2009 when Tom ended up on the BBC 2 TV programme Mastercrafts, about rural crafts. He was an apprentice green woodworker, competing with others making a greenwood chair with traditional hand tools and no glue. His won.

While some people misunderstand his business name – “I’ve had people ring to ask if I can organise a hen party,” – the appeal for smallholders is that he only has three basic designs to choose from. Coming in different sizes, they have the option of external nesting boxes, wheels, handles, VSB automatic door openers and timers; he also has starter kits for nervous beginners with drinker, feeder, feed, bedding and a poultry fencing kit.

His first is his All in One (house and run combined) which is easy to move, his advice being to make sure each hen has at least 3-4 square metres of run space. Customers seeking this design, Tom says, want their hens safe in their garden while they’re at work. The door is generally left open so they can be free to wander in and out of an even larger fox-proof run made from easy-to-move ‘Hotline’ poultry netting (4ft [1.2m] high flexible plastic string on plastic posts).

The one he sells most of is his elevated and easy-to-clean Free Ranger. Suiting flocks from three to 20, they have external nest boxes, a removable droppings tray and perches, a sliding pop-hole and full-width rear doors. Its elevation means less bending for cleaning out and egg-collecting, shelter underneath for feed and water, and no rats. Thirdly, Tom’s Ski Arks are the cheapest to buy (being the cheapest to build) and are good for small and large breed hens and ducks, with its wider ramp, all having skids and handles for easy moving, while the bigger ones are movable using ride-on mowers or tractors.

Tom has changed designs over the years in tune with customers’ needs. “Nesting boxes, with a lid that lifts up, are now generally external to be easier to clean,” he says. “The main floor/droppings tray comes out, and automatic door openers on a timer or daylight switch are pretty popular. People know they can go away for the weekend and have a neighbour to put feed and water underneath. “Hens are great,” he says, “because they put themselves to bed.”

Tom sees his future living coming from a variety of sources. At present he averages one day a week supply teaching, two to three days on hen houses (which he thinks could be a practical full-time business), and spends the rest of his time on woodcraft projects, some of them special jobs for customers – quail houses or fairytale chicken coops anyone? Tom is able to make absolutely anything people need for the outdoors (see facebook.com/theyonderwood).

He also has the security of knowing that he could return to teaching if necessary, just as making hen houses can be his full-time living. But this craftsman has the same restless spirit as any artist: “I’d make greenwood chairs for a living if I could,” Tom Vaughan says. “It would be more creative.” No one wins a creative woodwork competition on the BBC without realising that the world is now their oyster. Whether that makes some customers nervous or not, I suspect most smallholders would be delighted that the house that arrives for their hens was conceived, designed and put together by someone like that.