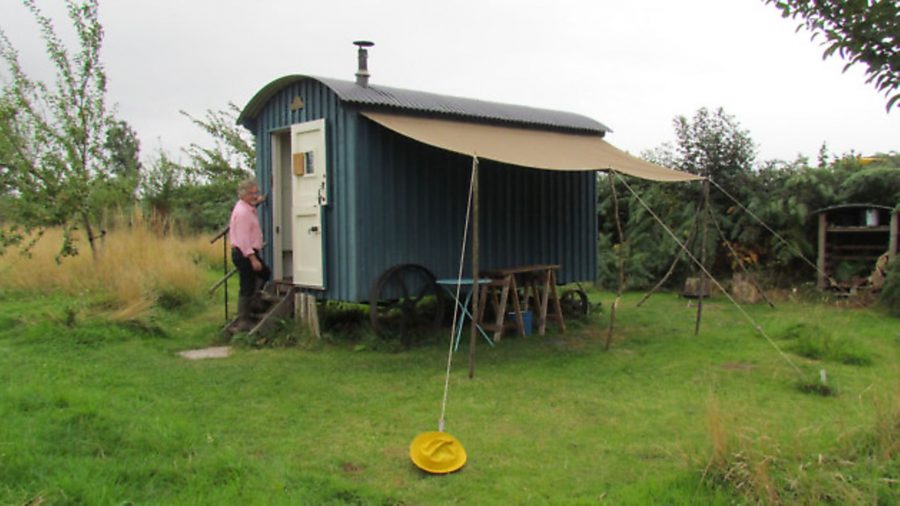 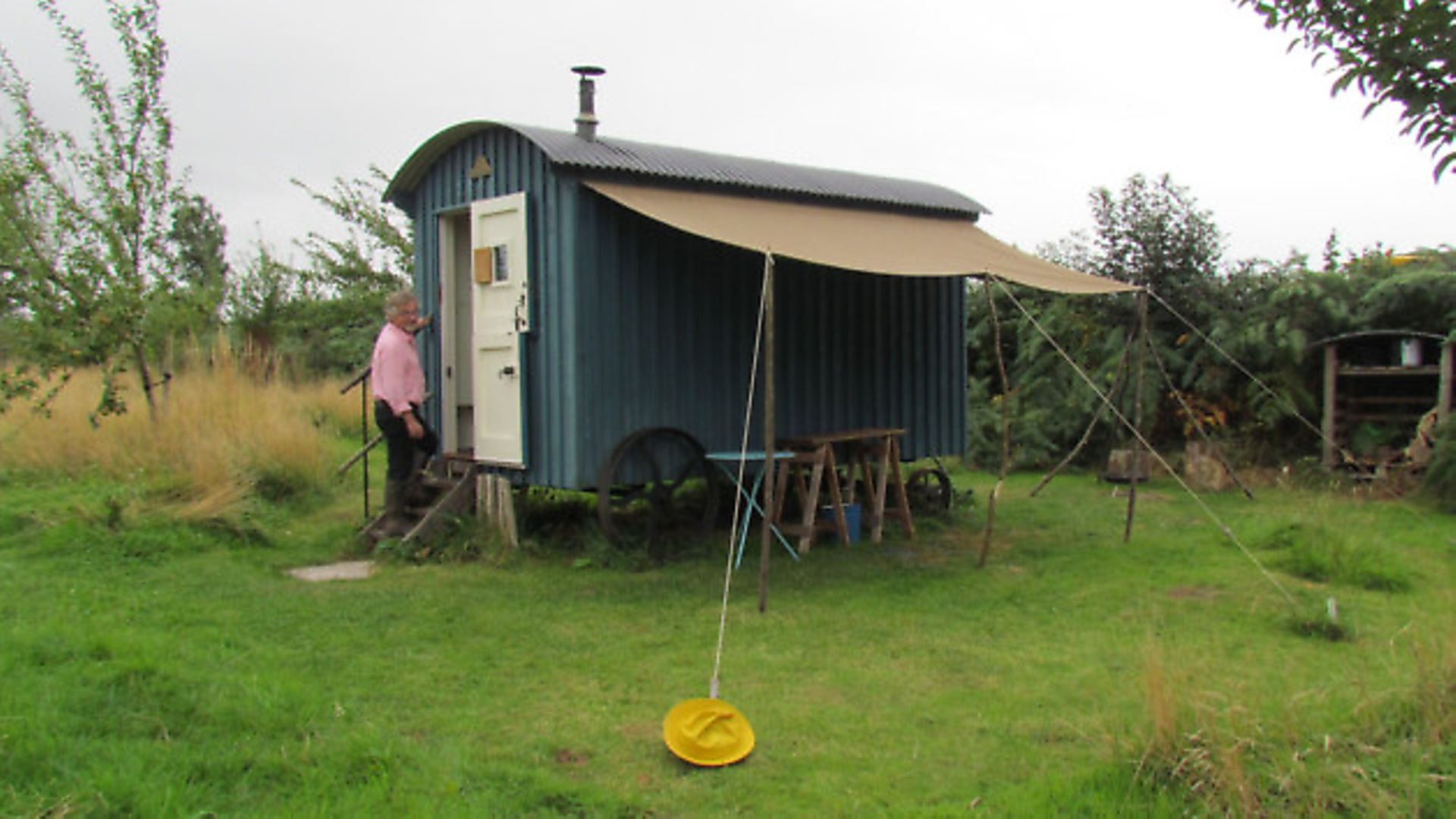 When my wife Gaynor and I were searching to buy our first smallholding, we were looking for a property with enough land to support our two horses, Poppy and Tez, and our companion Shetland pony, Jeffrey. We also wanted to keep chickens, possibly some sheep and pigs and to grow our own fruit and vegetables. In other words, we were after the typical smallholding dream. Years of living and working in big cities had taken their toll and we wanted the good life!

We found a partially converted barn with six acres in the beautiful Wye Valley with splendid views across to the Black Mountains. The land was steeply sloping and comprised three separate fields which had been used mainly for grazing sheep. Around the barn was a courtyard with stables and a single-storey barn which appeared structurally sound and ripe for converting to bedroom accommodation. As well as creating an enclosed chicken run in the field behind the barn and erecting a sheltered area for pigs, I wanted to put a traditional shepherd’s hut at the back of the field which I would use as a study/office and writing room inspired by the wonderful views. In the same field we would plant an allotment with a greenhouse and a polytunnel.

We completed the purchase last September and sat down in front of the log burner to work out our plans. All seemed set fair, we would engage builders to carry out the conversion of the barn. We would level off part of the field for the allotment, put up the polytunnel and greenhouse ourselves and set about creating our dream. Then Gaynor said: “Do we need planning permission for any of this?” It was a good question and one I had been struggling with. “I am not entirely sure, I think it depends.” Gaynor looked at me with a slightly exasperated expression, “A typical lawyer’s answer; well, if anyone knows, you should.”

It was true, I should. I have been a planning lawyer for over 30 years dealing with large complex commercial projects and yet our apparently modest proposals had left me reaching for the legal text books. Putting a chicken coop and erecting an enclosed run with a 2m fence surely would not need planning permission? And the growing of vegetables on an allotment is either not development at all or at least permitted? The shepherd’s hut might be an issue, but more on that later. 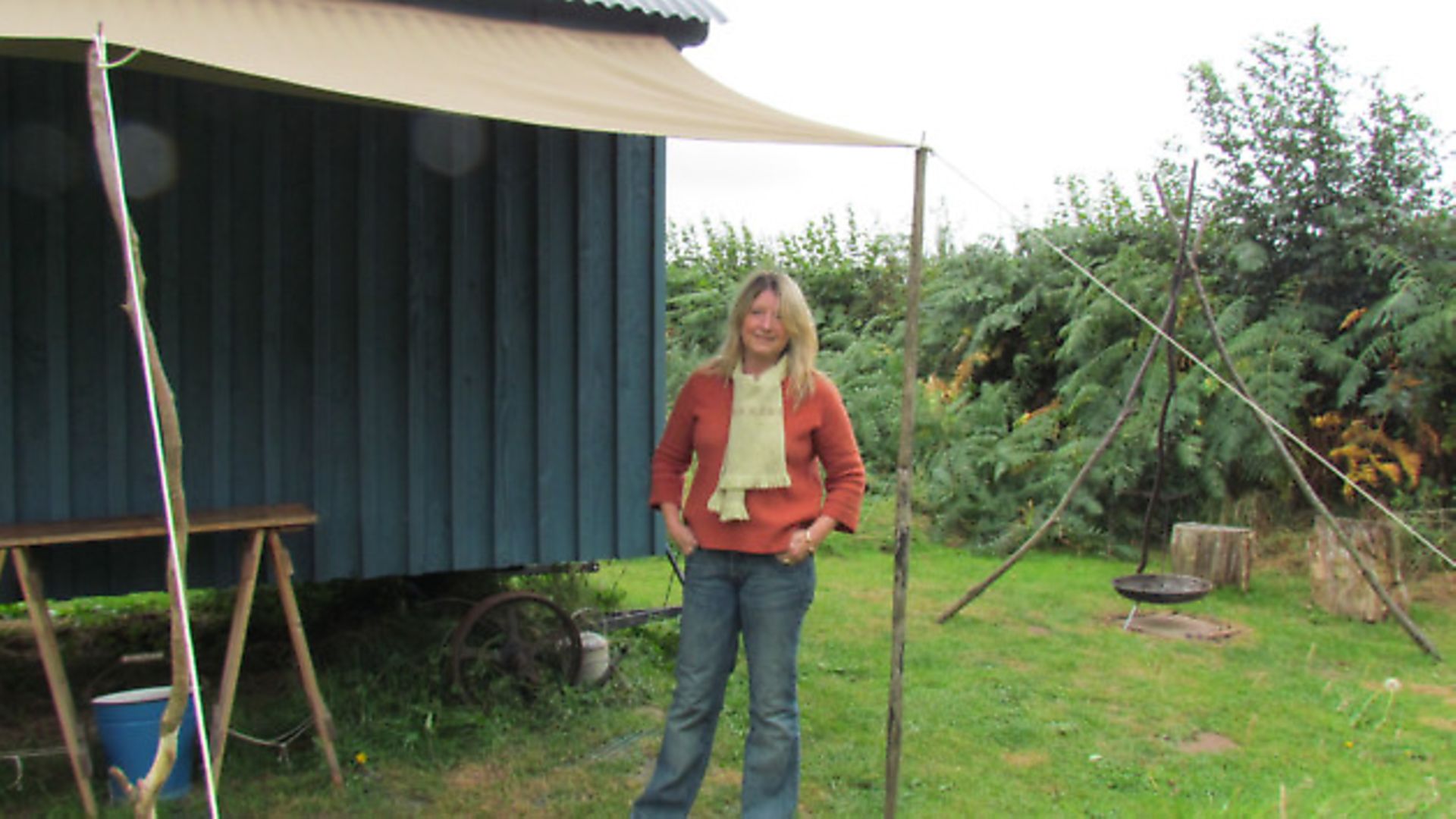 There are different planning rules which apply to land within the curtilage of a dwelling house and those affecting land outside this area. A curtilage is broadly defined as the enclosed area which surrounds a dwelling. In an urban setting it would simply be the garden surrounding the house, but in the countryside it is not always so easy to tell. Often a traditional farm building will have been converted with planning permission to a residential dwelling and an arbitrary garden or curtilage will have been drawn around it as part of the planning application. But over the years that garden area may have been extended into adjoining fields or reduced by using the curtilage for agricultural use. So establishing what is the curtilage is not always straightforward. It is what lawyers call a matter of fact and degree. In other words, it depends. The importance of it is that within the curtilage you are allowed to use any buildings or other land for any purpose “incidental to the enjoyment of the dwelling house”. This includes the keeping of “poultry, bees, birds, pet animals or other livestock for domestic use or personal enjoyment”. Permitted development rights allow you to erect buildings within certain prescribed size limits, although there are important exceptions. 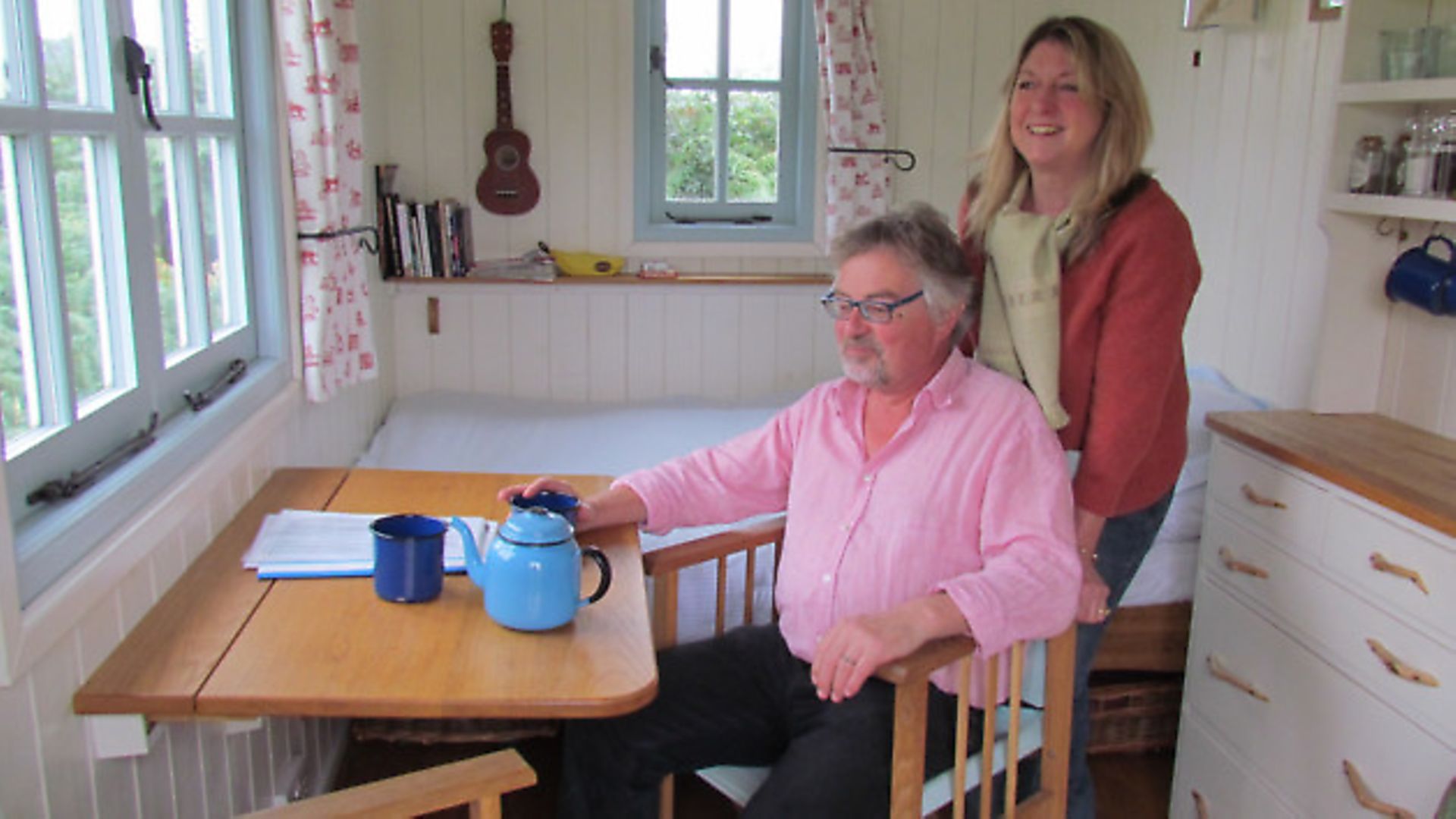 But our problem was that we wanted to put our coops and shelters in the field behind the house, almost certainly not part of the curtilage. The permitted development rights which apply to the curtilage of a dwelling house do not apply to agricultural land. Agriculture has a wide definition in planning law; it includes horticulture, fruit and seed growing and the breeding and keeping of livestock as well as grazing land.

The use of the fields for keeping animals is fine, but the erection of any building, no matter how small, would not be permitted development. But surely our chicken coops and pig shelters would not be ‘buildings’? Planning law defines buildings as any structure or erection or any part of a building and the legal text books are full of examples of interpretation of this phrase. Would our greenhouse and poytunnel fall within that definition?

Three factors determine what a ‘building’ is: size, permanence and physical attachment. It has been held by the courts that poultry units measuring 20m x 6m x 3.5m each housing 1,000 hens not fixed to the ground and capable of being moved within a paddock were nonetheless ‘buildings’. The ability to move the units around the field would not bring them outside planning control. In another case, large polytunnels constructed with machinery with stakes penetrating one metre into the ground, were subject to planning permission due to their attachment to the land.

However, both cases involved commercial farming and our proposals were far more domestic in character. Again, the question of fact and degree comes into play. The general rule for small structures is that, so long as they are not fixed to the ground and are capable of being moved without large machinery, no planning permission should be required. So shelters for pigs, coops for hens placed in a field will not incur the planners’ wrath.

But what about my shepherd’s hut? It is on wheels, capable of movement and not physically attached to the ground. Because I was not intending to use it for purposes connected with the agricultural use of the field, the issue was not so much whether it was a building (although the truth is that most shepherds’ huts usually remain in the same position) but whether there had been a change in use of the area of land on which the hut is stood. This was all becoming rather complicated even for someone familiar with the principles involved. I called the local council for a view. The planning officer was in no doubt. He reminded me about the permanency test and confirmed my fears that a change in use would be involved. I therefore needed to apply for planning permission, not an inexpensive exercise; there is a site visit fee in our area of £120 (different scales apply in other areas) and a standard application fee of £385. However, if I were to site the hut within the curtilage of the barn, then that would probably be acceptable since the use of the hut as a study/office would be a use incidental to the enjoyment of the house. But again, the issue of permanence and whether it counts as a building could still be a determining feature. Whether we will be successful in our planning application will depend largely on so-called amenity issues such as visibility from public roads and footpaths and the effect of the hut on the landscape. Putting up any building in the countryside which is outside the curtilage of a residential building is always going to present planning problems even if it is a structure associated with an agricultural use. And if your smallholding is in an Area of Outstanding Natural Beauty, a National Park or in a Conservation Area, more stringent rules apply. Even our proposed greenhouse, if it is built on bricks or otherwise permanently physically attached to the ground, probably needs permission unless it is within the curtilage of the house. It has been held by the courts, however, that an allotment is agriculture so at least the use of the land for growing fruit and vegetables is not an issue.

And what about the extra accommodation in our converted barn? Well, I was on firmer ground there. Any agricultural use had long since been abandoned. A decision some years ago established the principle that the use of an existing building within the curtilage of a dwelling house for the provision of additional bedroom accommodation is permitted development so long as the ownership of the house and building remain in single family accommodation. All of our works were internal and therefore exempt from the planning system. However, if you live in a listed building, any buildings within the curtilage built before 1948 will automatically be listed as well whether or not they are mentioned in the listing description. As such, internal alterations may well need listed building consent if they affect the architectural or historic interest of the building.

It just goes to show how careful you have to be. Planning regulations are highly complex (probably unnecessarily so) and, whilst you can often get away with minor infractions unknowingly, it only takes one upset neighbour to report you to the local planning enforcement officer and the full might of the planning system can descend. This could well result in you having to remove any structures you have put up or change back to the pre-existing use. It is worth noting that although the principles of the planning system are consistent throughout the country, there are significant differences between the rules that apply in Scotland, Wales and England. And the interpretation of those rules can often differ between geographical areas within each country. One of the most important lessons I have learned over my years in practice is that early consultation with anyone who is likely to be affected by the proposals is always a good idea.

People are often opposed to any changes to their locality no matter how insignificant the project may appear to be. By talking through your plans first and taking on board any reasonable suggestions you can accommodate it is surprising how often initial opposition can be resolved.

Likewise with the local planners. Because of the labyrinthine nature of the system, it is always a good idea to talk through the proposals with your local planning officer as well as your neighbours before doing anything which might need to be undone.

As for our own plans, I am reasonably confident we will be able to overcome any planning obstacles, although Gaynor says that’s just another typical lawyer’s fence-sitting phrase.

But, I respond, experience just tells me that it’s better to be safe than sorry.