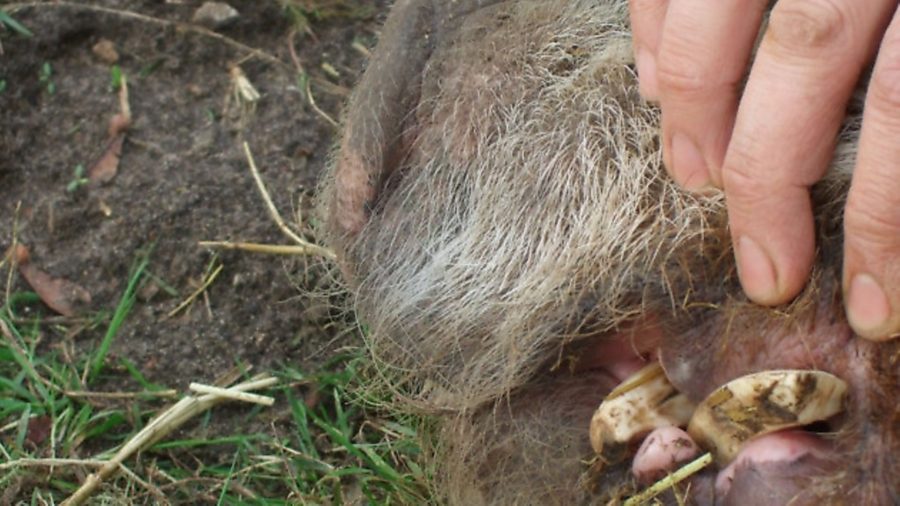 Extracting a boar’s tusk with a hacksaw? Are you serious? Yes, says smallholder Andrew Rock… 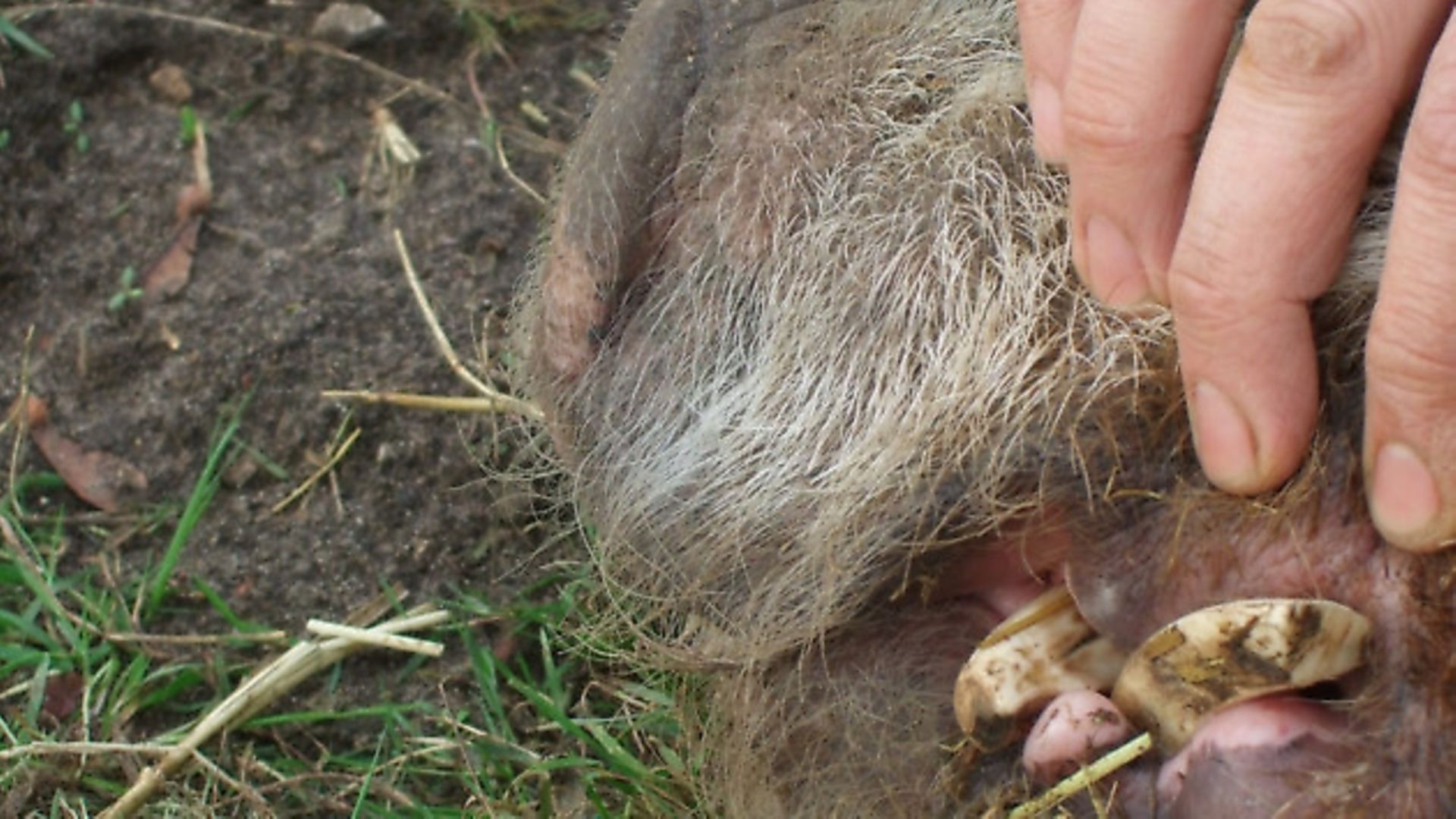 Jack is an Oxford Sandy and Black boar that lives with his sows on my smallholding in Lincolnshire. He is four years old, very large, very strong and very friendly. I have known Jack and his previous owner for some time and, when he was advertised for sale earlier this year, I decided to buy him.

Jack arrived in very good health but had one large tusk that had started rubbing the outside of his cheek. I was concerned that as it continued to grow it would cause problems. The usual process to remove a boar’s tusk involves restraining the animal with a pig-noose around the snout and using a type of cheese-wire saw to cut the tusk off at the gum line. Due to Jack’s size and strength, this option did not really appeal. I was also concerned that such forceful treatment may permanently alter his friendly temperament. Another option would be for a vet to sedate him. I have no experience of this but imagine that it may carry some risk and, depending on how the sedated pig is positioned, access to the tusk could be difficult. On several occasions I had examined Jack’s tusk quite closely and, during one such check, an idea occurred to me. Would it be possible I thought, to cut off the tusk with Jack’s cooperation and consent? Surely not. No animal would allow that… or would they? 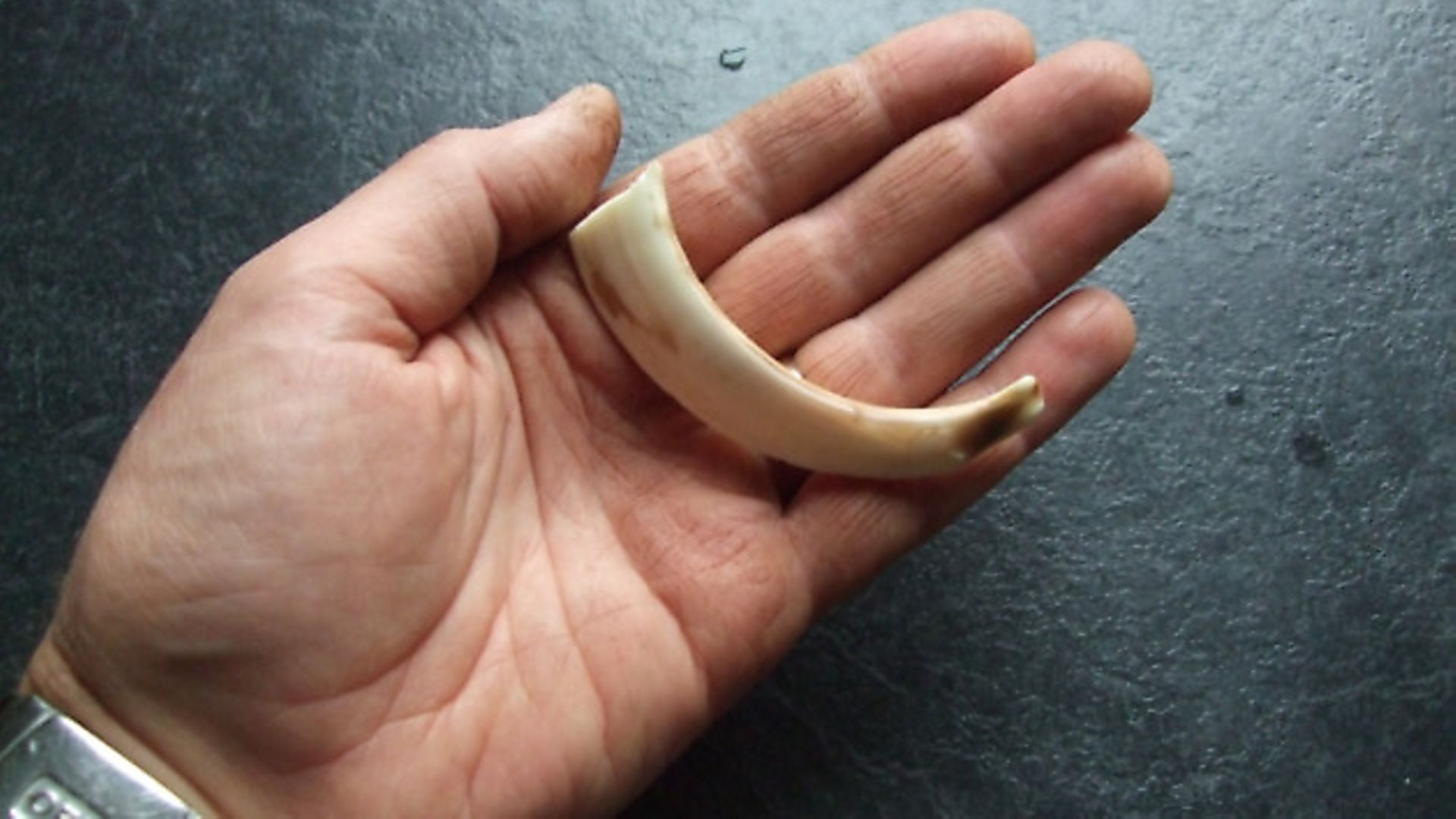 During October we had some very mild weather. The afternoon sun was strong, warm and it felt like summer. Jack would make the most of an afternoon sleep in this sun and would enjoy a rub of his belly and a scratch behind his ear. I picked one of these afternoons to have a go at removing his tusk. I used a junior hacksaw with a fine blade. A cheese-wire may cut more quickly but would be difficult to remove half way through a cut. I had nothing to lose so made a start.

I talked to Jack so as not to startle him and kept him content by the occasional belly rub. I held his gums out of the way and put the saw blade to the tusk. I had previously studied some American research suggesting that cutting a boar’s tusk at the gum line may cause pain and therefore recommended a cut one inch above the gum line. With this in mind and moving gently at first, I started to saw. Amazingly, he did not seem to mind. The blade soon started to cut a groove and Jack continued to enjoy the sun. After about five minutes I was nearly half way through the tusk when Jack decided he had had enough and left. I could not force him to stay so let him go.

A couple of days later, Jack was back in the sun. I tried the same routine but this time Jack let me finish. He hardy moved. Maybe he knew what I was trying to do and was happy to have his tusk removed. I was, however, relieved when the final cut released the large, curved, quite menacing looking item.

From reading internet forums it appears that tusk removal is a common cause of concern with small scale pig breeders. There is no easy solution. Although I have found a method that worked for Jack, I am not sure that I could recommend it for other boars. It may be that Jack’s temperament is unique. In any case, the procedure is potentially dangerous if the boar suddenly objected. A great deal of care and awareness of your boar is needed. But if you do have a particularly gentle animal, plenty of time, patience and a sunny day, it may just be worth giving it a go.