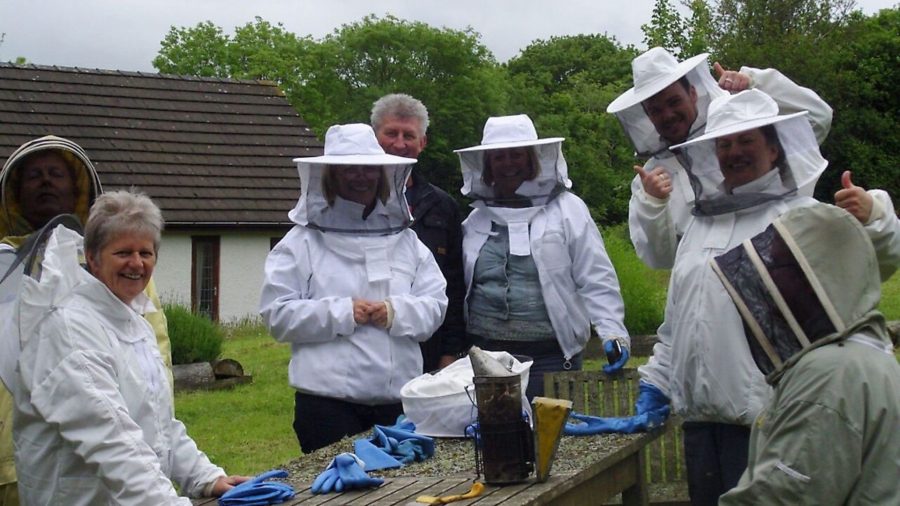 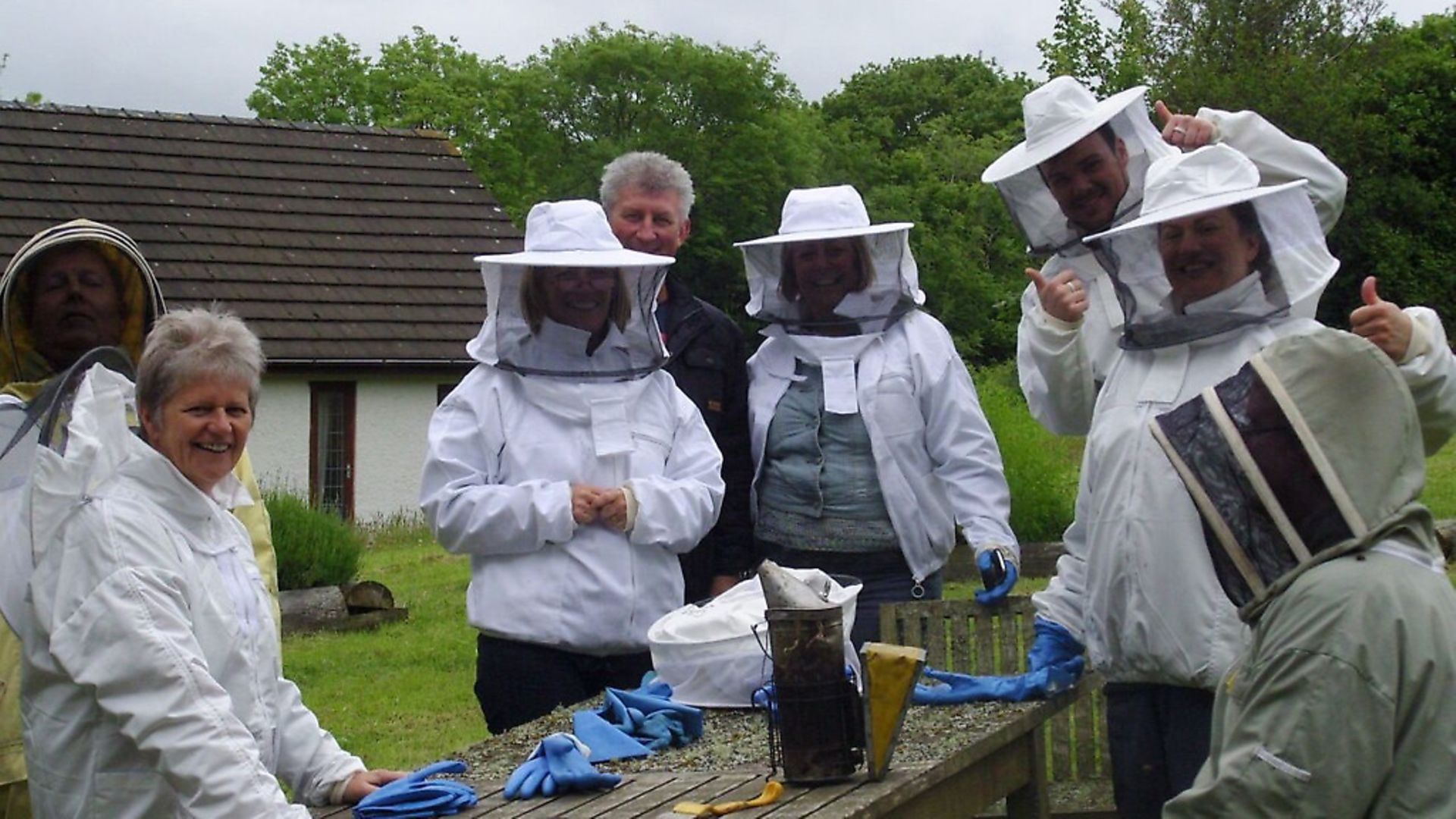 Sam Cooper’s interest in bees started at the tender age of nine and grew when a neighbour offered to show him the ropes in exchange for some help with his hives. One day, Sam’s dad (who at the time was a small-scale dairy farmer) started to read Sam’s beekeeping book in the cowshed and became hooked himself. He started diversifying in the selling of beekeeping equipment whilst still farming, selling honey at the farm gate and eventually setting up a small shop which in 1995 was officially launched as popular tourist attraction and wholesale business to be: New Quay Honey Farm.

In recent years, Sam’s childhood interest has come full circle as he has returned to West Wales to take over the family business which his childhood hobby inspired. “My parents were getting ready to retire in 2011, so a return to the area made sense. I was living in Kent at the time with my wife and young son and there were lots of contributing factors to our move. For one, I’d been beekeeping in London as a sideline to my day job and it was all going well, but I couldn’t work out how to make the transition to do this as a full-time career. It just seemed silly to try to reinvent the wheel in Kent when it was all going on here in Ceredigion.

“I can remember one morning at work (I was a civil engineer) having a moment of clarity. I used to get in for 7am because then at least I got a seat on the train; as I sat down and opened my laptop, I thought, is this me now? Is this what I do for the foreseeable? The spark had gone. I realised I was ready for something new.”

Nowadays, there are two sides to the honey farm business. The old dairy farm (set in 40 acres) is now run on a two-acre site with the rest of the land rented out to neighbouring farmers. The site has been utterly transformed with a visitor centre, comprising a shop, café and a bee display, which enables visitors to see what really goes on behind the closed walls of a hive. It’s popular with both visitors to the area and locals, and enables people to see the interior of a bee nest and a colony at work, something you wouldn’t experience unless you were actually keeping hives yourself. Sam said: “You might see the queen, the brood and the different stages of development, where the honey is stored… seeing bees doing waggle dances and communication and this sort of stuff. If you spend enough time watching you’ll see it all. It’s educational even to me as a beekeeper – watching bees in that sense; it’s fascinating.”

With 500-odd hives scattered across the area, the farm also makes mead and sells honey and lots of related products through their on-site shop. It also supplies shops across the country including Waitrose branches in Wales.

Having taken on the business, Sam also has many more ideas for the future growth of the enterprise besides. “I love driving down the little lanes to the hives and spending half my time crawling through a hedge to catch a swarm of bees or going through a hive and thinking why the hell has this one done that, I really didn’t expect it to .” 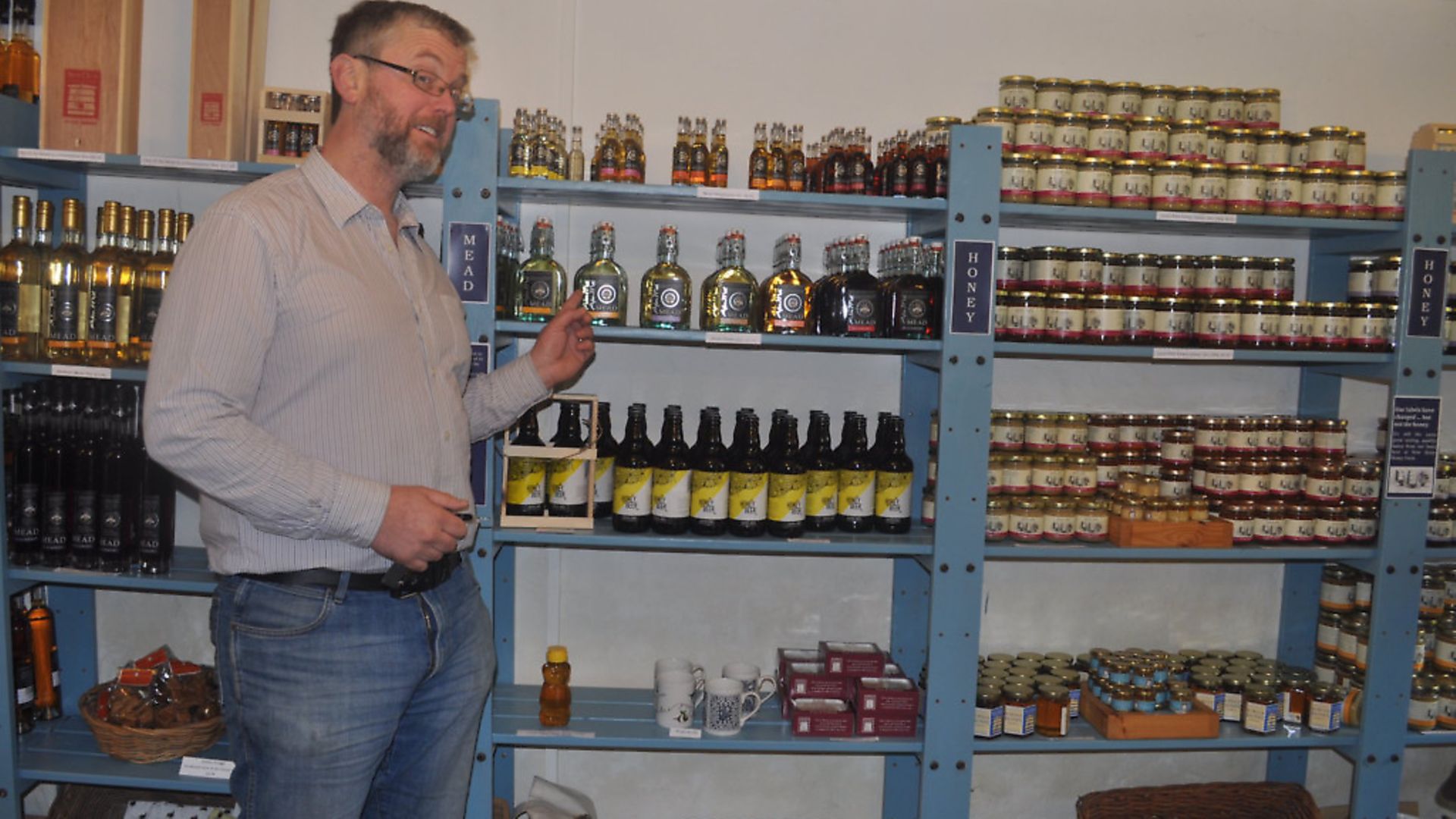 The switch from dairy farming to the honey business didn’t happen overnight; rather it built up gradually over the years until it became the sensible next step for the Cooper family to take when they decided to give up their cows. They started out selling honey from the farm gate and then went onto become the bee equipment supplier for the area, which led to the set-up of a small shop to stock everything. Then a small exhibition hive was added and it became clear that there was a real interest from the public, so the changeover itself became only a matter of time.

Sam said: “I read about a world-renowned concert pianist who still practises several hours a day. Someone asked him why he still practises so much. He replied: “Well, I really feel like I’m actually getting somewhere now.” It’s like that with bees. Nothing is exactly the same, ever.

“Someone else said there’s no such thing as a good beekeeper; there are just good places to keep bees, and that really puts it in context. You might think you’ve got some clever idea and all the rest of it, but actually what you are looking for is good places to keep bees and just to keep them alive. If you can do that then you’re doing well.

“Really, a good beekeeper is someone who does the right things at the right times – the bees do the rest. Sometimes you have to trust they know what they are doing and leave them to get on with it, but also you have to pick out the moments when they have done the wrong thing, as that does also happen. For example, a beehive that swarms on a day when it is obviously going to rain (and will probably do so for weeks). You think ‘why did you do that – it wasn’t very clever was it?’ So they don’t always get it right.

“At the end of the day, we know a few little tricks that can manipulate behavioural patterns amongst bees and, if it’s sunny enough, I collect honey at the end of the year. Even though I’ve been doing this since I was nine, I can’t make my colonies produce more honey in a less sunny year – it just doesn’t work like that.”

MORE: New Quay Honey Farm is in Ceredigion. Find out more about it and their beekeeping courses at http://www.thehoneyfarm.co.uk or by calling 01545 560822.

There are so many benefits to beekeeping on your own land, not least of all the fact that honey itself is delicious. It’s also potentially very good for you. Sam said: “We had our honey tested as part of a Cardiff University project and, although it wasn’t as strong as manuka, it was effective against MRSA in petri dish conditions. There’s no doubt that manuka honey is particularly bioactive, but at £30 a jar for the really good stuff, you could buy twice as much of something else and be in the same place. As long as honey isn’t pasteurised and is raw, it’ll be bioactive to some degree or another.”

A good beekeeper is someone who does the right things at the right times – the bees do the rest.