Ramsden Rare Breeds is a family run smallholding on the edge of the Cotswolds that is an object lesson in generating ideas to make it pay. John Wright reports 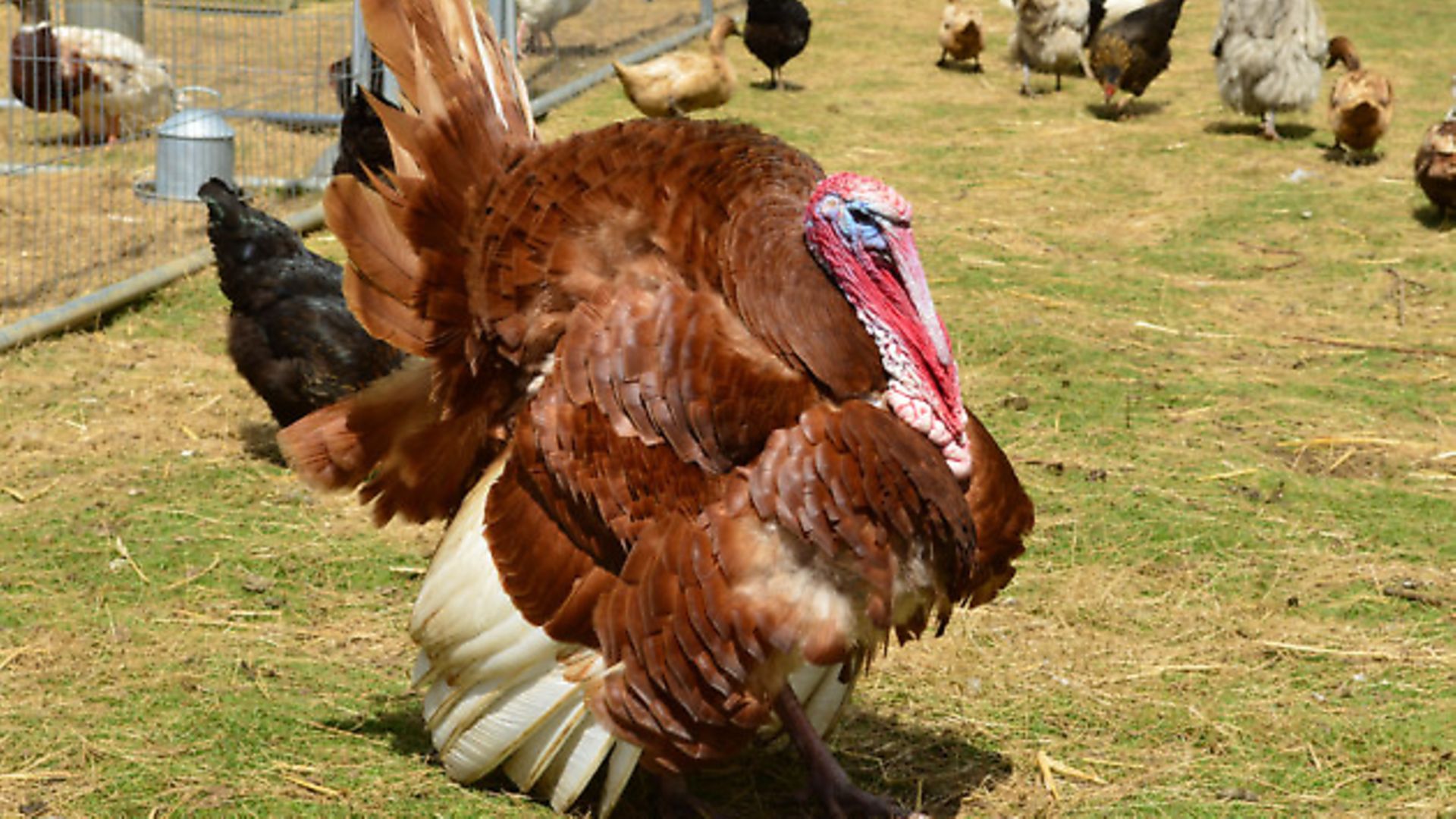 Anyone thought of charging admission? The entrepreneurial idea of starting a smallholding that opens to the public came to Paul Tomlin after a traumatic year when his divorce and tragic loss of his middle son left him with a difficult choice to buy either a house or land. Choosing land, he now either lodges with his children not far from the smallholding or is found on his narrowboat on the Oxford Canal.

Paul is not new to smallholding. “Eight years ago, my ex-wife and I bought 50 acres and went into goats, selling unpasteurised cheese to shops, restaurants and at the farm gate,” Paul told me the afternoon black clouds moved, leaving us in warm sunshine to walk round Ramsden Rare Breeds Farm in Oxfordshire. His children Ben, Susan, Danny, Kirsten and their partners (all with other jobs) are a vital part of this family operation. “I do it for love, pride, passion and wanting to make it work,” Kirsten says.

“We began it,” Paul says, “to sell rare breed sausages, eggs, burgers and meat, and for breeding. Initially I had rams on it and had it in the back of my mind to work somehow with the nearby garden centre.” The temptingly two-fold prospect of generating income by opening to paying guests arose after Paul approached its new owner who was up for new ideas, seeing visiting animals as an added attraction for his customers. Initially renting the land, Paul bought it six months ago: “We’re currently applying for planning permission for change of use to allow us to open to the public, which the planners have recently indicated they would like to support.”

Between them is a one-acre conifer plantation, through which Paul designed a winding gravel path for visitors. “It’s a bit of a punt whether it’ll work,” Paul says, adding that he’d have bought the land had the garden centre not been there. The public got advance notice in more ways than one. “Our curly-coated Mangalitza pigs have caused quite a stir; it’s been so good for business,” Paul says. “People stopped their cars and took pictures, and truck drivers asked, ‘Are you curly pig man?’ 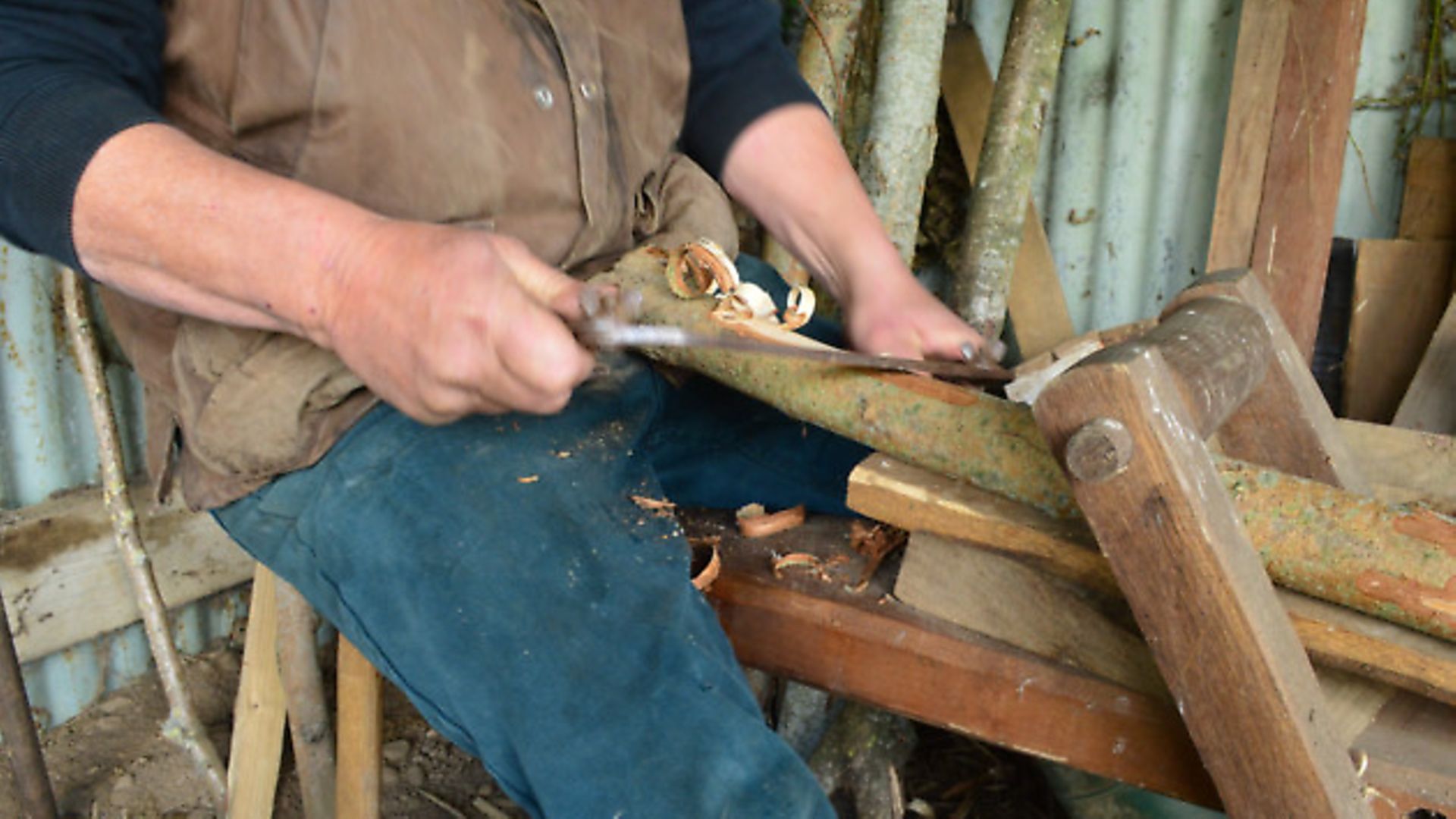 Curly pig man is the first to acknowledge that the pigs’ charming presence amongst his miniature donkeys, pygmy goats, Soay sheep and Sebastopol goslings means his work is cut out blending petting with farming: “We sent two to slaughter with no PR. And it does make it harder if people name them!”

Paul tells me the Mangalitza are related to the Lincolnshire Curly Coat, exported to Europe around the 1960s and becoming extinct in the UK in the 70s. “In recent years, a strain has been imported back,” Paul says, his curly coats certainly enjoying the bit of woodland on his borrowed land to snuffle about in.

“It’s difficult not living here from an animal husbandry point of view. If I began again, I’d find land near a village then buy a house near-by.” He struck lucky as one reason for buying the plot was discovering it had a 3-phase electrical supply. “I wouldn’t have bought it without it,” Paul says. “When cutting hedges we also found a phone line and mains water standpipe from the garden centre.”

Someone not mentioned yet is Katharine, Paul’s long-time friend and assistant who works in admin and comes three days a week, which in her case is no mean feat from Shropshire, a nice two-hour jaunt on the M6! Katharine, who has no farming experience, is gradually finding her feet with DEFRA red tape, Paul stressing the importance of staying on top of paperwork. Generally, their workdays at the smallholding are an astonishing 6am to 10pm. The office is a shed built on an old caravan chassis with windows and doors found in a skip. “We try and recycle wherever possible and keep all buildings mobile to minimise the intrusion on the land’s biodiversity,” he says. 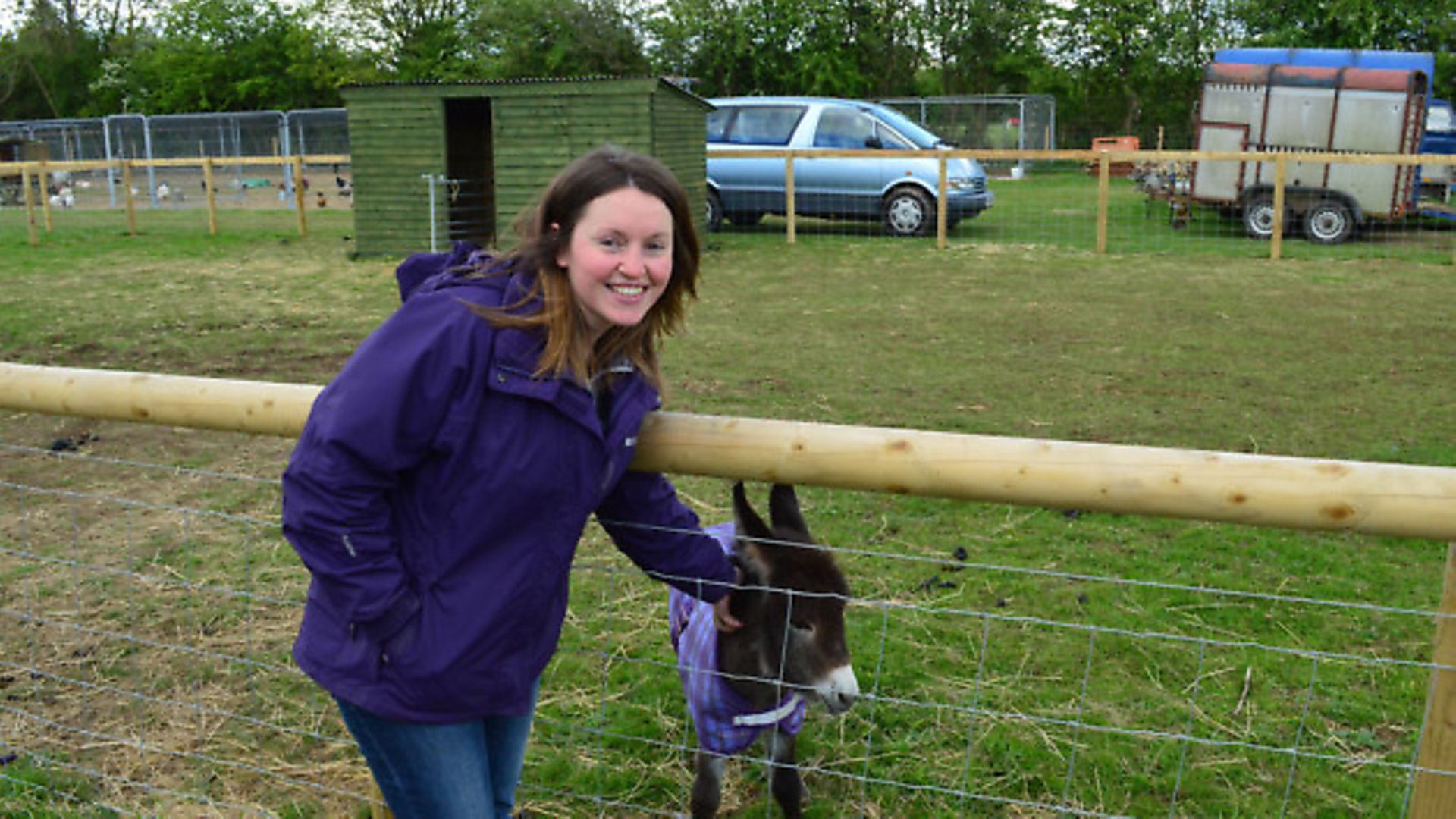 Paul makes it clear that despite being resourceful (“We halved the cost of chicken houses by buying wendy houses for ₤150, put a nest box in, raising it above ground providing shelter underneath”) he’s paid for big jobs such as fencing (₤11,000 to contractors). He leans on the gate to show how tired it would have made him.

“We are feeling our way,” Paul admits. Growing up on a farm as a teenager, he has returned to the whiff of manure after a lifetime in many specialties which seem pleasantly related: “I trained as a harpsichord maker, ran the joinery workshop at Blenheim Palace for 11 years, set up a therapeutic gardening charity, including a five-acre vineyard and had an art gallery in Wales.” His experience makes him a perfect adapter: he built a kidding and lambing barn using a car transporter chassis he bought on eBay.

They try and buy pedigree livestock wherever possible and are members of the Rare Breeds Survival Trust and other individual breed societies. Their black and white Bagot goats are some of only 150 breeding females in existence. Paul says they don’t produce a commercial amount of meat and milk so they only have them for breeding to preserve the line, which they’ll begin in August.

Probably the star of the show when excited kids arrive will be the black one-month-old Mediterranean miniature donkey, named JoeJoe by Kirsten’s niece Evlyn, which came with his mother Daisy. They have golden and white Golden Guernsey goats, their home yet another caravan chassis (free) with shed for ₤50 from a B&Q sale. Paul plans pens within pop-up gazebos and they’re building 2ft [60cm]-high rabbit runs. 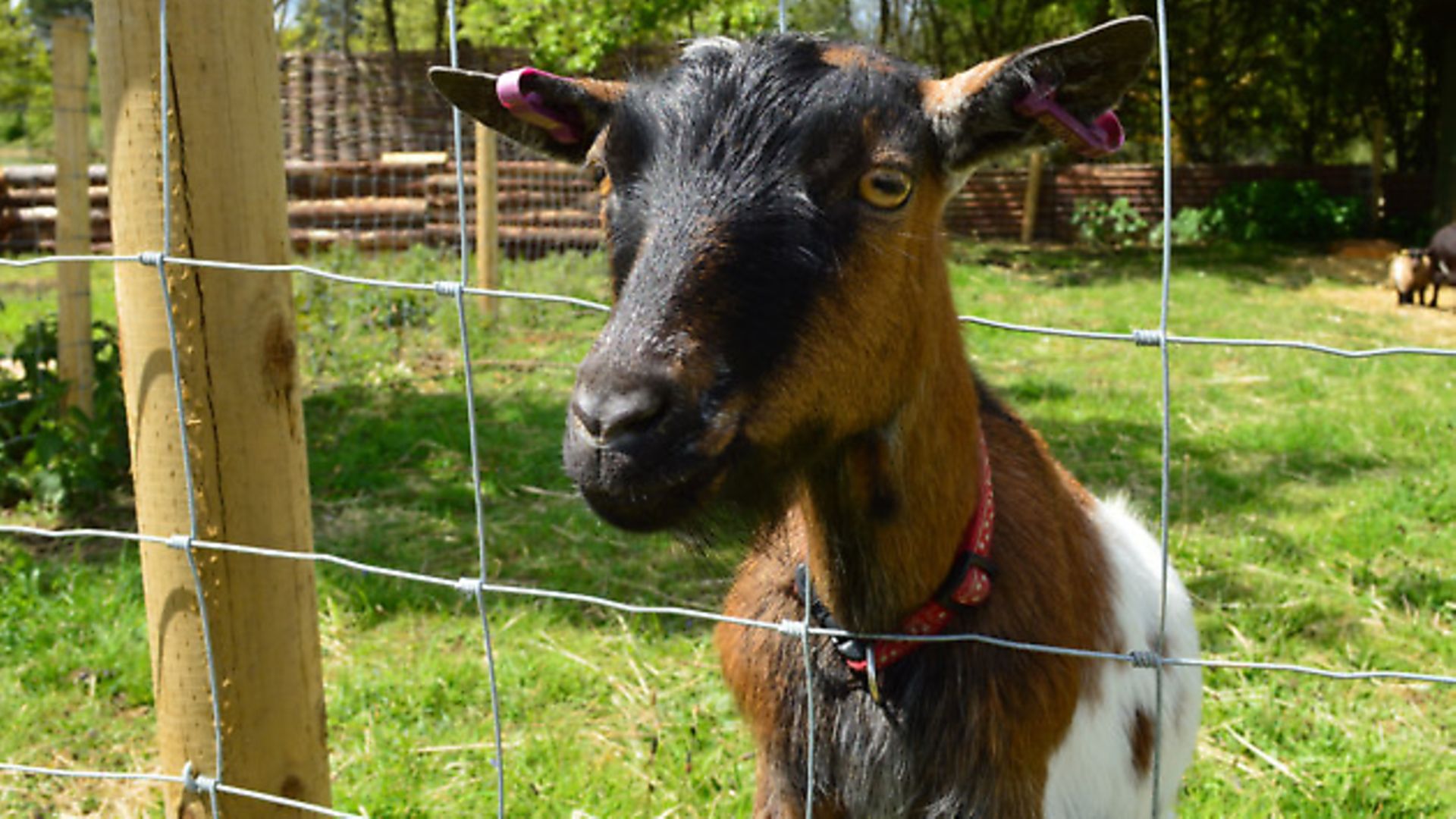 The whole thing is easy to walk round and he’s planning signs such as ‘Pigs like kids, but they can’t eat a whole one’. Environmental Health asks that there be no droppings in walkways, and Katharine’s non-admin job was made clear when she lifted her pan and brush. Paul plans to install a wetland wildlife area and duck pond with native planting like willow.

Other attractions will undoubtedly be his intriguing shed of bygone farm tools, his 1954 Fordson tractor – unused for 21 years, fired up immediately – a rural museum, gypsy caravan-style ‘living van’ he made on a 1933 hay cart chassis, where he can spend the odd night in case of overnight birthing of kids or lambs. Then there’s the exquisite 1931 Singer jalopy he plans to adorn with a sign to promote the business on shopping trips.

Teaching traditional skills is on the agenda too. He’ll run blacksmithing workshops and courses; his green woodworking shed has a shave horse and rakes he made in half a day in woodland bodger (turner) style; and he plans weekend courses in making rakes and stools using branches that have been given to the goats that strip the bark. Sounds exhausting? Paul is convinced that running a 2-4-acre smallholding can be as hard as running a 300-acre farm as there’s so much hands-on work.

He remains cheerful with sobering advice about cost. “If it doesn’t make a living we’ll still have a nice smallholding. It always costs double what you think: ₤20,000pa just to keep the animals with the cost of pedigree stock, feed, fuel and public liability insurance – it only takes one sheep to run onto the road. So if two people are employed at ₤15,000 each that’s ₤50,000 a year the smallholding has to make.”

What he is thankful for is all the help friends and family have poured in. While we contemplated this challenge, a coach went past with kids for a neighbouring Bushcraft course. “We’ll try and entice them,” Paul says with a grin, mentioning the interest shown by schools and colleges in work experience and placements. If anyone can pull off an enterprise like this you get the feeling it will be this family.