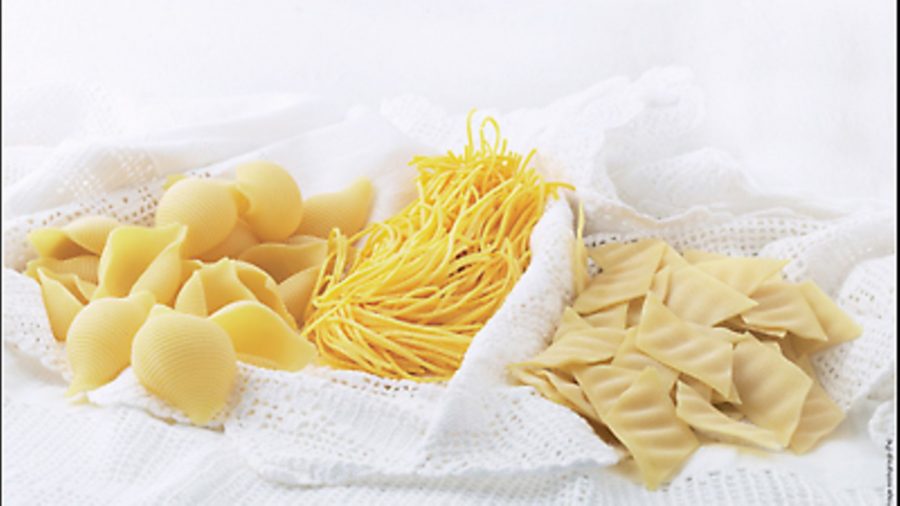 Carol Wilson gives us some easy and delicious pasta recipes

Pasta to Italians is more than just a food – it’s a way of life and an essential part of their culture.  Cheap and simple to make, pasta has always been combined with whatever is available – cheese, mushrooms, meat or poultry, depending on the income of the family. On special occasions and holy days, home-made pasta is an important part of the celebrations.

225g/8oz small pasta shapes1 avocado pear2 teaspoons lemon juice3 sticks celery, diced1 eating apple200ml/7floz extra virgin olive oil5 tablespoons white wine vinegar1/2 teaspoon mustard powdersalt and pepper2 tablespoons chopped chivesCook the pasta in boiling salted water until al dente. Drain and rinse under cold running water then drain again thoroughly. Peel and stone the avocado and cut into cubes. Toss the cubes in the lemon juice to prevent browning. Core the apple and dice it, then mix well with the avocado, celery and pasta.  Place the remaining ingredients into a large screw-top jar and shake well to blend. Toss the salad ingredients in the dressing and serve.  Dolce di taglieriniAn unusual cake for a special occasion. It is made with a fine, thin type of pasta called capelli d’angelo or angel hair pasta. You can use vermicelli instead if you can’t fine angel hair. This cake is always served hot or warm, as it becomes heavy when cold.6 eggs, separated220g/7oz golden caster sugar225g/8oz capelli d’angelo or vermicelli225g/8oz ricotta1 teaspoon ground cinnamonpinch ground clovespinch grated nutmegpinch salt50g/2oz plain flour50g/2oz sultanas soaked in hot water for up to 1 hour225g/8oz apricot conserve300g/10oz honeyBeat the egg yolks and sugar until thick and mousse-like. Cook the pasta in boiling salted water for 2 minutes then drain and rinse under cold running water and leave to drain. Beat the ricotta into the egg yolk mixture with the spices and salt. Gradually stir in the flour, then add the soaked sultanas and pasta. Whisk the egg whites until stiff but not dry and gently fold them into the mixture, a little at a time. Pour into a buttered 23cm/9inch round cake tin, base-lined with greased greaseproof paper, and bake 1-11/2 hours, Gas 6/200ºC. Combine the honey and apricot conserve in a pan over a low heat until melted. Remove the cake from the tin and spread the top with some of the honey mixture. Pour the remaining sauce into a jug and serve with the cake. Serves 6.

This article is from the June 2006 issue of Country Smallholding magazine. << To order back issues click the link to the left.