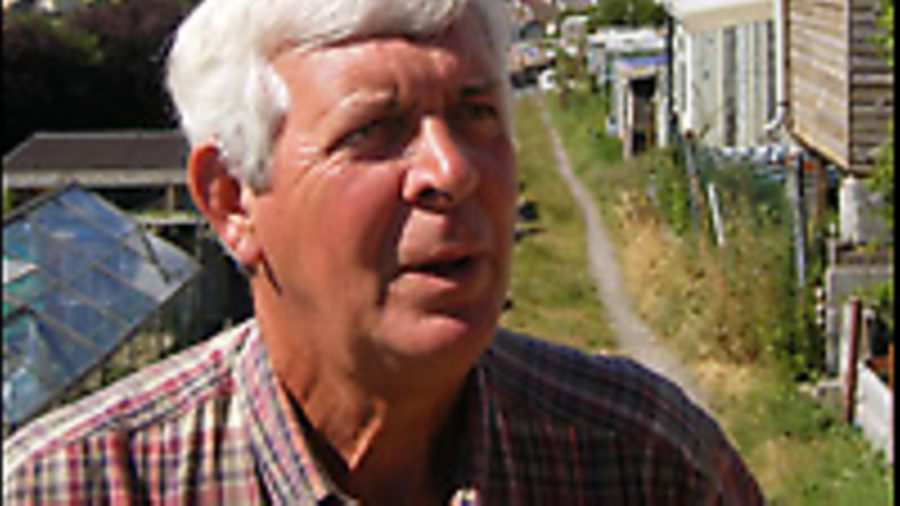 Welsh allotmenteer Terry Walton has become an unlikely star on The Jeremy Vine Show on BBC Radio 2. In the second part of a three-part series, he dispenses more growing wisdom to STEVE CHILCOTT

Welsh allotmenteer Terry Walton has become an unlikely star on The Jeremy Vine Show on BBC Radio 2. In the second part of a three-part series, he dispenses more growing wisdom to STEVE CHILCOTTTerry Walton on the mobile to Jeremy Vine: “DISASTER! This pumpkin … I went to look at it this morning, and it’s HOLLOW. A slug has eaten all the flesh.”Jeremy Vine, on air to 6 million listeners:  “Today in the studio we have John Major talking about his life as Prime Minister … and news just breaking from the adopted allotment: THE SLUGS HAVE EATEN THE PUMPKIN!”Terry’s allotment is five miles from his home, close to the house he was born in. The view is tremendous, whether you look down across Llwynpia to the hills on the other side of the broad Rhondda Valley, or up the valley itself, where you can see the long ribbons of houses hugging the road as it climbs up through Treorchy and Treherbert to the high mountain beyond, all purple and gold in the setting sun. When they do a house repair and fill a skip, it’s empty by the next day … and all the contents have found their way onto the allotments! “We can find a use for everything – every bit of wood, every window-frame, every bucket!” said Terry. “Recently people have had double-glazed units replaced and they are now building double-glazed greenhouses! They make them to suit the size of the frames!”Terry’s own greenhouse is ringed by a chain of second-hand blue plastic drums interlinked cascade-style and fed with rainwater from the guttering or, in times of drought, with ice-cold stream water from the mountainside above.“It runs by good old-fashioned gravity from the mountains. We sink a bucket in the stream and put a pipe in and, with a good old suck and a blow, we get the water running!“If  you are watering you need to spend a couple of hours in one session just doing that; it’s no use just dampening the soil, you’ve got to give it a good soak because tickling just frustrates the plants.“I don’t grow melons … I grow gooseberries, strawberries and cultivated blackberries. No blackcurrants, raspberries or redcurrants because there are so many on the allotments. I can always swap.”In his book, My Life on a Hillside Allotment, Terry says: “The best time on the plot was always early July, when everything was in its full glory. I would look forward to that, and still do … by then the rows of runner beans are covered with their bright crimson blooms, creating a magnificent flowering hedge…”Albie’s café is a converted greenhouse on the allotments. “He grows his cucumbers in there,” says Terry. “There’s a cowbell on the door and when the coffee’s ready the cowbell rings and we all troop in, sit down and put the world to rights!“We do more debating in there than in the Chamber of the United Nations! We pick the Welsh football side, the Welsh rugby side…”

You don’t use grow-bags?“I don’t believe in grow-bags. You get blossom end rot and it’s very difficult to control the watering. They are either too wet or too dry. In the borders you can control it. “I use a small amount of earth, compost and some manure in my borders, and when I empty these onto the plot this is a fantastic medium for growing your carrots.”

So you dig it out and put it straight into the carrot bed?“Yep, only trouble you get is where you’ve dropped a few tomatoes on the floor your carrots are full of tomato seedlings! You pay the earth for tomato seedlings, but they grow like anything! The most resilient seed on earth. You look at a pub that sells food and you look at that garden in the spring and you’ll see tomatoes coming up everywhere! Go to any good sewerage works and you’ll have tomatoes growing all over! These have gone through every process possible and they’re still growing.”

I see you use a wormery“The wormery is brilliant for making compost. When I put my broad beans in this January I mixed 50% wormery compost with 50% multi-purpose and these beans are the healthiest on the allotment! I use the ‘worm tea’ too and I find that a fantastic organic feed.“Worms generally work their way upwards. You do get some fatalities that go downwards and drown, but they are forever moving up if you keep the top layer well fed with the stuff they love, and I do add the little pellets and God knows what … adjust the pH …and they love it and just keep moving up and up. It’s fantastic stuff!“Once a month I give the pH treatment and the ‘treat’, as they call it…“We get plenty of waste. We grow so much veg. I don’t use the bulky stuff like bean pods; they go into the ‘Dalek’ composters. This is just what we put in the caddy in the kitchen; off-cuts of lettuce or fruit. Tea bags … they devour them in no time!“I use Bokashis too. You collect kitchen waste, put it in with a bacterial bran which helps it to break down. Gives off a nourishing liquid feed, then you add it to compost heaps as an accelerated compost maker. I’ve got two of them on the go.”

And composting?I’ve got a regular guy who keeps pigeons and he rings me up on the weekend when he cleans out his lofts. Pigeon and chicken manure are two of the greatest once they’re weathered properly. They’ve got all the right nutrients for fabulous growth, but you can’t use them under nine months old. During the winter I spread them on the plot, and during the summer they go into the compost. I collect lots of strawy manure and inter-layer it with the pigeon manure.“For me, finding a source of manure is a weekend job in summer, when I go scouting to discover where people have the stuff to give away freely. On those mornings I take Anthea along with her yellow Marigold gloves, and her job is to hold the bags open – there’s nothing worse than trying to fork manure into a plastic bag on your own because you end up missing the bag, which makes hard work of the job. I aim to get about 12 bags in two journeys.“I’ve had this plot, and been manuring it, for 18 years. It’s in fabulous shape and I can pack them in! I’m the greediest gardener; you have to tiptoe between my plants! And I attempt to double-crop on at least half of it.”

What about chemical versus organic?“I am 98.7% organic! I still use the mini blue pellets under my cloches!Lindane, DDT … in the ’50s I was using them all to blast anything that moved! As soon as a pest attacked, you came out with a little pack, puffed the white powder all over the plants and nuked the pests. This  practice spread steadily during the mid-60s and into the ’70s. By the early ’70s I had gone from fully organic to almost completely inorganic on my plots.“Artificial fertilisers became more common – simple compounds such as sulphate of ammonia or nitrate of soda – no more worries about collecting large amounts of humus to feed the soil. Instead you raked in a couple of good handfuls of National Growmore … they’d shoot up green and healthy overnight.“But the realisation came that maybe we were storing up troubles for ourselves. I had two kids and I couldn’t be sure exactly what we were eating with our vegetables. I haven’t used anything since the ’70s.“But I’m a great believer in liming. Looking back at the records of sales at the allotment shop in the 1930s I see the only entry in the ledger is for the sale of lime. Lime is the perfect additive for adjusting soil conditions to a pH in the range 6.5 to 7.0, which is near perfection for most of the vegetables we grow. I  use it regularly to this day for improving soil fertility and texture.”Terry pointed to a pot that looks like a terracotta top hat. “I am trialling these for someone. It’s got a mushroom inverted on top and underneath it’s sprayed with copper, and the slugs can’t cross the copper and get to the marigolds. Some guy in Cardiff has invented them and I’m trying them out. Up to now they’re working brilliantly, on lettuce and marigolds.”Catch Terry Walton every other Friday on the Jeremy Vine Show on BBC Radio 2 (check their website for full details).Terry’s delightful book, My Life on a Hillside Allotment, is published in both hardback and paperback by Transworld Publishers/Bantam Press at £12.99 and £9.99 respectively. It is available through the CS Bookshop.Feedback please to steve@thecountrysmallholder.com