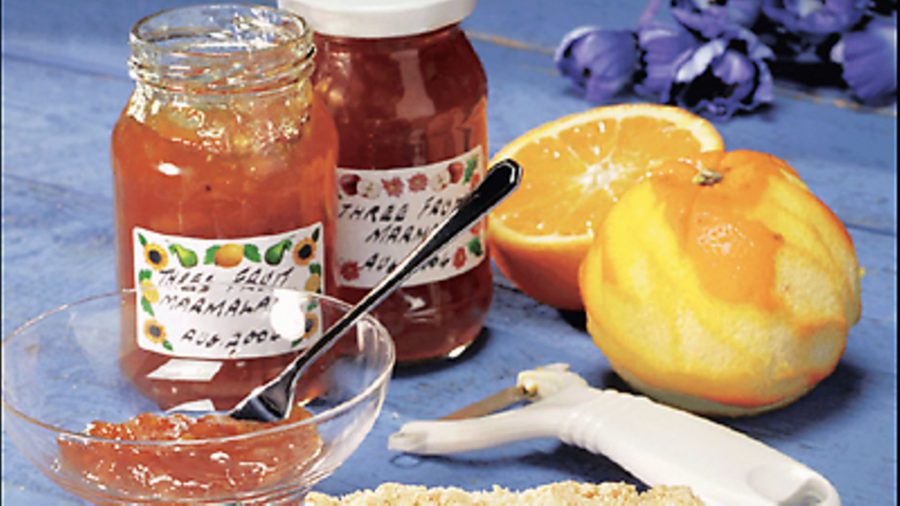 Just after Christmas, gloriously fragrant Seville oranges make an all too fleeting appearance in our shops. Snap them up when they arrive (from the end of December until the end of February) as they can be frozen (whole) successfully. Wrap each fruit individually in cling film, then pack into freezer bags and freeze until needed.  The conquering Muslim Moors in the 8th or 9th century took oranges with them to southern Spain, and by the 13th century, orange groves were a feature of an area extending from Seville to Granada. These early oranges were valued mainly for their ornamental and medicinal properties, rather than their bitter tasting fruit and the aromatic peel and sharp juice were prized by the Moors for their invigorating effect and healing qualities.They pounded the zest into a paste, shaped it into pellets and ate the pellets at the end of a meal as a digestive. The astringent juice was recommended to ‘mitigate the thirst’. The bark of the orange tree was chewed as a breath freshener and the waxy white blossoms were distilled into orange flower water to use both as a perfume and as medicine. Modern Spanish brides still carry orange blossoms in their wedding bouquet as the small, fragile flowers symbolise purity.  Monks and nuns in Spain’s monasteries and convents used Seville orange juice in fish dishes, candied the rind with sugar, made orange marzipan and dipped the fruit into a sweet batter and fried it. Oranges were put on the table with the salt at monastery meals. The peeled fruit was sliced crossways and sprinkled with salt and a little olive oil. Sevilles were also served sprinkled with sugar as a luxurious treat. The fragrant peel and sharp juice of Seville oranges also inspired the creation of the famous liqueurs Curaçao, Cointreau and Grand Marnier and of course, bitter orange marmalade. In Iran, the juice is used instead of lemon with fish and other dishes.Although best known for their use in marmalade, the flavour and high acid content of Seville oranges work well in many other dishes too. In any dessert calling for oranges, Sevilles will give much more flavour than sweet varieties. Sweet oranges just can’t match the unique flavour of Sevilles in both sweet and, particularly, savoury dishes when sweet orange juice and peel would be too bland and lacking depth of flavour. Sweet oranges were unknown in England until the 15th century when they were imported from Portugal and China. As late as the 19th century, whenever oranges were required in recipes in English cookery books, this meant Seville oranges. If sweet oranges were to be used they were described as ‘China’ or ‘Portugal’ oranges.  Before using, scrub the fruit well in hot water to remove the protective wax coating and use a potato peeler to remove the rind.  Don’t include the white pith as this is too bitter. To obtain the maximum amount of juice from the oranges (or any other citrus fruit) warm the fruit first by pouring boiling water over them and leave to stand for five minutes.

Making marmalade The pectin (which gives the set) is mainly contained in the pith and pips, so these  must be kept, tied loosely in a piece of muslin and added to the pan. The secret of good marmalade is fast boiling. To tell when setting point has been reached, remove  the pan from the heat and put a little of  the mixture on a chilled saucer. As it cools, the jam should begin to set, will wrinkle slightly and will remain in two separate parts when you draw your finger through it.Test after 15 minutes, then every five minutes after that. When setting point has been reached, remove the pan from the heat and let the mixture stand for about 10-20 minutes, when a skin will form on the surface. This prevents the peel rising to  the surface after potting. Stir once before pouring into the jars and the peel will be suspended evenly in the jelly.Jars must be clean and warm before filling them to the brim to allow for shrinkage. Wash the jars in hot soapy water, rinse and put in a low oven to dry and become warm.  Stand the jars on folded newspaper to prevent cracking when the hot jam or jelly is poured in. Wipe the outside of the filled jars and cover the marmalade with a waxed disc when hot, but seal with a cellophane cover  or lid when cold to prevent condensation which encourages mould. Label and store in a cool, dry place. Seville orange and ginger marmaladeYou can use either stem ginger (from a jar) or crystallised ginger in this recipe. The combination of flavours produces a warm spicy marmalade.1kg/2lb Seville oranges, scrubbed2 lemons, scrubbed25g/1oz fresh root ginger3 litres/51/4 pints water2.7kg/6lb golden granulated sugar, warmed in a very low oven227g/8oz stem or crystallised ginger, choppedHalve the oranges and lemons and squeeze out the juice and pips. Remove any thick white pith and chop roughly. Peel and chop the root ginger and tie loosely in a piece of muslin with the pips, pith and orange flesh. Place the muslin in a large pan with the orange and lemon juices. Cut the orange and lemon peel into fine shreds and add to the pan with the water. Bring to the boil, then reduce the heat and simmer for 11/2-2 hours until the peel is tender. Squeeze the muslin bag juices into the pan and discard. Stir in the warm sugar, over a low heat, until completely dissolved and add the chopped ginger. Boil rapidly until setting point is reached. Remove from the heat and leave to stand for 10-20 minutes. Stir well to disperse the ginger and pour into warm sterilised jars. Cover with waxed discs and seal when cold.

Sticky sausagesUse the marmalade from the recipe here, or use a good quality bought Seville orange marmalade.1 tablespoon oil12 sausages150g/5oz dark Muscovado sugar50 ml/2floz lemon juice3 tablespoons sherry or ginger wine3 tablespoons Seville orange and ginger marmalade2 cloves garlic, crushed2 tablespoons soy sauceground white pepper to tasteHeat the oil in a frying pan and brown the sausages on all sides. Drain off the fat and put the sausages into an ovenproof baking dish. Put the remaining ingredients into a pan over a low heat and stir until the sugar has dissolved completely. Increase the heat and bring to the boil, then cook for 2-3 minutes. Pour the sauce over the sausages.  Cook for 10 minutes Gas 6/200ºC/400ºF then baste with more sauce. Cook for another 15-20 minutes until cooked through.  Serves four.

Marmalade muffins225g/8oz plain flour1 tablespoon baking powder1/2 teaspoon bicarbonate of soda4 tablespoons light Muscovado sugar1/2 teaspoon salt1 egg, beaten225ml/8floz milk50g/2oz butter, melted and cooled1 tablespoons grated orange zest6 tablespoons Seville orange marmaladeSift the dry ingredients into a large bowl.  Beat together the egg and milk, then add the melted butter and orange zest. Make a well in the centre of the dry ingredients and pour in the liquid all at once. Mix lightly until just combined. Spoon 2 tablespoons batter into the base of each of 12 paper muffin cases.  Add about 2 teaspoons marmalade then cover with the muffin batter to fill the cases three-quarters full. Bake for about 20 minutes Gas 6/200ºC/400ºF until golden brown and cooked through. Cool on a wire rack. Serve warm or cold.

Marmalade crumble cake200g/7oz butter200g/7oz golden granulated sugar1 egg, beatengrated zest of 1 unwaxed Seville orange500g/1lb 2oz plain flour1 teaspoon baking powder1 jar (450g approx) Seville orange marmaladejuice of 1/2 Seville orange50g/2oz ground almondsCream the butter and golden granulated sugar until soft and light, and then stir in the egg and orange zest. Sift in the flour and baking powder and using your finger, work the mixture until crumbly. Press half the mixture onto the base of a buttered 25 cm/10 inch round springform cake tin. Combine the orange juice with the marmalade and spread evenly over the cake base. Add the almonds to the remaining mixture and spoon over the top, to cover the marmalade. Bake for 40-60 minutes Gas mark 6/200ºC/400ºF until browned. Cool in the tin for a few minutes, then remove from the tin and leave to become cold on a wire rack.

Polenta orange syrup cake (wheat and gluten free)3 eggs110g/4oz golden caster sugar110g/4oz butter, melted and cooledjuice of 1/2 Seville orange225g/8oz polenta (cornmeal) 1/2  tablespoon gluten-free baking powderfinely grated zest of 1 Seville orangepinch salt1 teaspoon vanilla extractSYRUP:juice of 2 Seville oranges140g/5oz golden caster sugarWhisk the eggs and sugar until thick and mousse like. Beat in the melted butter and orange juice. Add the polenta and baking powder, followed by the orange zest, salt and vanilla, beating well. Pour into a 20cm/8 inch round cake tin with non-stick baking paper. Bake for 30-40 minutes Gas 3/170ºC/325ºF until golden. Test with a skewer, which should come out clean.  While the cake is cooking, make the syrup: put all the ingredients into a pan and heat gently until the sugar has dissolved completely. Bring to the boil and simmer for 5 minutes. Remove the cake from the oven and make holes in it with a skewer. Pour over the hot syrup and leave to cool. Turn out onto a plate and serve with whipped cream.

Seville orange tart175g/6oz shortcrust pastry3 tablespoons Seville orange marmaladefinely grated zest and juice of 4 Seville oranges110g/4oz unsalted butter at room temperature4 eggs, beaten225g/8oz golden caster sugarRoll out the pastry and line a 23cm/9 inch flan dish or tin. Bake ‘blind’ for 15 minutes Gas 5/190ºC/375ºF. Remove from the oven and reduce the oven temperature to Gas 4/180ºC/350ºF. Spread the marmalade evenly over the base of the flan case. In a heatproof bowl, beat the butter and sugar until light, and then add the orange zest. Whisk in the eggs, then place the bowl over a pan of simmering (not boiling) water and stir until the sugar has dissolved completely. Remove from the heat and stir in the orange juice.  Pour into the pastry case and cook for 20-25 minutes until just set. Serve warm or cold with whipped cream or ice cream. This article is from the January 2006 issue of Country Smallholding magazine. << To order back issues click the link to the left.