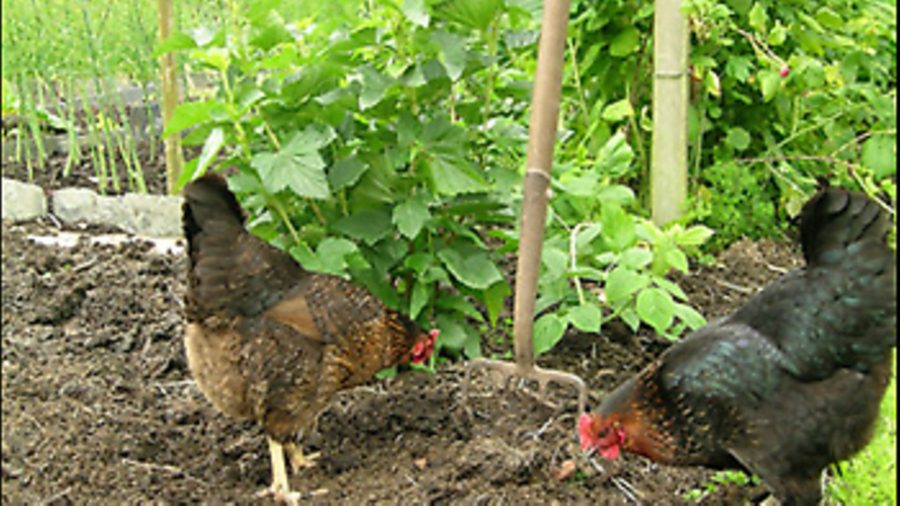 One of the best aspects of a smallholding lifestyle is the pleasure of eating food you have produced for yourself. But how much land do you need? Of course, there is no simple answer. Even a small garden can yield a worthwhile contribution to the kitchen table. ALAN BEAT looks at just what is achievable within a given space.

The next step up from a garden plus allotment might be a little bit more land such as a small paddock. This offers the possibility of keeping more species of livestock such as geese and pigs, or planting an orchard for top fruit, or growing on a horticultural scale. A modest orchard of a dozen to 15 carefully-chosen trees will start cropping within a few short years, and thereafter should soon yield enough apples, pears and plums to keep the family well supplied from August through to March. We inherited five old trees on moving here and planted ten more but, by using wall space as above, the actual growing area taken up by these new fruit trees in the garden is only about five by 15 yards.Geese are grazers and need a decent area of grass to feed on. This needs to be short, fresh growth, for they will not thrive on coarse tussocks of rank leaves. But, at the right stocking rate, they will keep the grass mown short and save you the trouble of cutting it. In doing so, they will find most of their own food and need little or no supplementary feeding from May to September, making them cheaper to keep and to fatten than other domestic birds. Geese lay relatively few eggs during the spring season only, so are most useful in terms of producing meat for the table. Goslings hatched in April will need a good start on bought-in feed, but this can be phased out after a few weeks so that they continue to fatten on grass alone until the autumn, when they can be killed as the traditional Michaelmas goose, or fed a supplement of cereals to keep them growing until Christmas. Use the services of a professional processor if you can, as plucking by hand is notoriously slow and difficult.The pig was once the traditional occupant of the cottager’s sty, and should be so again today; but these intelligent animals deserve better than the dark, cramped prison to which they were often confined and still are today by intensive agribusiness.You must have at least two pigs together, for no social animal should be kept in isolation from its own kind. Their need for shelter is simply a roof overhead and a cosy nest of dry bedding beneath so, during the warmer, drier months from late spring through to autumn, this is easily improvised with pallets, bales of hay or straw, sheets of waterproof material, a few fencing stakes – whatever you have to hand or can readily obtain. Build it solidly, or the pigs will quickly break it down.Over the cold and wet winter months, something rather more substantial is required, while pigs will turn all except the most free draining soil into a quagmire, so the most practical option is either to house pigs in an outbuilding with hard standing or simply to avoid keeping pigs at all during this period. Young weaners bought at the end of April will reach slaughter weight for pork by early September and for bacon by late October, thus avoiding any need for winter housing.Pigs do well on free range but will root up whatever ground they have access to. This may be welcome if there are brambles, nettles or other rank weeds to clear, but not if good grazing needed by other livestock will be destroyed. Use them by all means to plough up rough ground for improvement, but otherwise restrict them to an area that can be sacrificed to their activities. They soon learn to respect electric fencing and stay confined within it.If no land can be sacrificed, confine them further to a sty with an outside concrete pen, but make this large enough to meet their need for exercise and natural behaviour, and provide greenstuffs daily. As a guide, we have often raised groups of four or five weaners within an old stone outbuilding measuring ten by eight feet, with access to an outside yard measuring ten by twenty five feet, where they do very well.Near-neighbours to us have productive flower, vegetable and soft fruit gardens; a large barn full of laying hens; a series of sties and pens housing a boar, several breeding sows and some fattening pigs; and a small shop by the roadside gate where eggs, vegetables, home-made preserves, pork, bacon, etc are sold direct to the public. They do all this on half an acre of land and, if that isn’t smallholding, I don’t know what is!

FinallyWe have seen that it is possible to become largely self-sufficient in vegetables, salads, soft and top fruit, eggs and meat on a relatively modest patch of land, and certainly on half an acre. More land enables larger grazing livestock to be kept to enhance the diet and to fertilise the gardens.  I know of examples where two acres supports a small sheep flock or a horticultural business; three acres a house cow; and eighteen acres a full-time organic poultry business that financially supports the owners.On the other hand, I know many who consider themselves commercial farmers, with much larger acreages of land at their disposal, who are unable to earn a living from their farming activities and rely on B & B, contracting activities or the salary earned off the farm by the wife to keep them afloat financially. How can we draw the line between smallholding and farming, when it is a fact, supported by survey after survey, that very few so-called commercial farms are independently viable today?A smallholding is what you make of it and is not bound by any definition dreamt up by someone else. “Hobby farmer” is a derogatory term used by those who consider themselves (usually wrongly) to be commercial farmers and should be treated with the contempt it deserves!