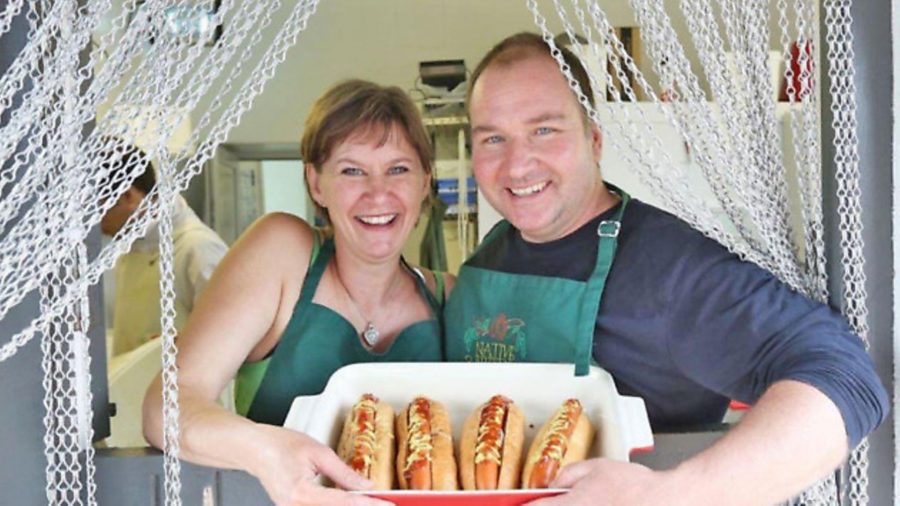 My two Kunekune sows both had litters. The gilts sold, but I was left with five castrated boars that no one wanted. ‘Do you know anyone who can make salamis and stuff like that?’ I asked a neighbour. He put me in touch with Graham Waddington.

Graham and Ruth used to live in Cardiff. Ruth worked with people with learning difficulties and Graham was a consultant working in the public sector. Both loved gardening and hankered after a bit of land. They found a house with half an acre in a village outside the city and made the move. They started to grow vegetables. They got a few chickens and then a couple of pigs. Inspired by the TV programme River Cottage, they tried to make things. “It was chaos!” laughed Graham. “We had the meat from the first pig we’d reared back from the abattoir, and invited family and friends round to help us. We had no idea what we were doing. We had a pile of ingredients, sausage casings and some books. I’m amazed anything was edible at all after we’d finished with it!” But not only was it edible, it changed Graham and Ruth’s whole outlook as far as meat was concerned. Graham had been a vegetarian. He loved meat, he just hated the way it was commercially produced. Raising his own meat was, he said, “a transforming thing. It made me appreciate it in a way I had never done before”.

They borrowed more land, raised more pigs, sold some pork to a local restaurant, made bacon and sausages and sold them to neighbours. And they got great feedback. “It was a hobby; we were still doing our other jobs, but that was great. It meant we could try things, experiment, without it being a huge risk.” Then Graham met James Swift, another small-scale pig farmer at a local food festival. He, like Graham, was also interested in whether he could do more with the pork he produced, add more value. “Europe has a long tradition of charcuterie, but we wanted to see if we could produce British-made charcuterie with our pigs and if there was a market for it.” With the help of a small grant from the Welsh government they embarked on a year of research, going to Germany, Spain, France and Sardinia. They worked in various places, gaining insight and experience and then returned to set up their own charcuterie business. The highlight came when they won a BBC Food and Farming Award. “All the people we revered were in that room, and they were recognising us. We suddenly realised that what we were doing was important, and it had a positive impact. Our products supported farmers raising rare breed animals in a sustainable way and gave consumers a chance to buy something knowing the provenance of every ingredient.”

James wanted the business to expand, Graham wanted to stay small, so they decided to go their separate ways. Graham and Ruth set up Native Breeds charcuterie. “It was wonderful, starting from scratch, working together. But running your own business often means you are spread very thin; it does have a huge impact on your lifestyle.” The reward for all their efforts is, says Graham, being able to stay true to their ethos of producing great British charcuterie and provide a market for small-scale farmers rearing their animals in an ethical way. “And every day is different. I’d never done anything with Kunekunes until I met you! I get to experiment, to innovate and that’s what I love.”