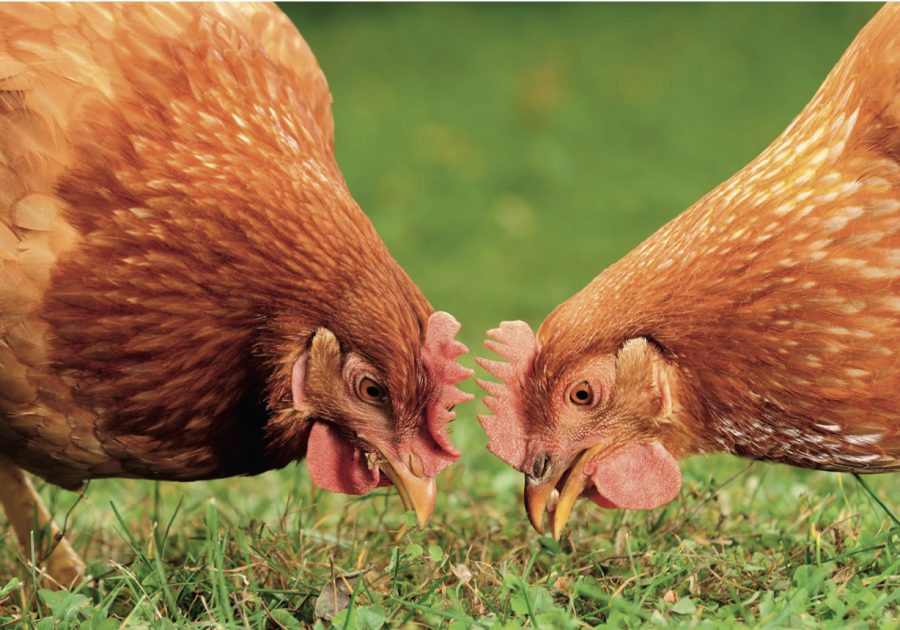 The obvious thing to ask a poultry specialist of some 45 plus years is why chickens? I am fascinated by all poultry and would take the British Poultry Standards as my Desert Island book (I’m sure Radio 4 will ask me soon, but I don’t meet so many people that have made it their life’s work.

David smiled when I asked him, from his zoom office.

“ Well by accident really. I was working as a cattle vet in the much mentioned summer of 1976 and there was not much cattle work due to the lack of pasture caused by the prolonged drought. My practice at the time transferred me to poultry work and I became very interested in it. For one thing, at that time you could do far more tests to establish disease in poultry than in cattle and there was much to learn. I went on to do research at a Central Veterinary Laboratory and at that time, the disease we all worried about was Newcastle disease and to a slightly lesser extent, Marek’s. Without good vaccinations in the future there would have been no poultry industry. 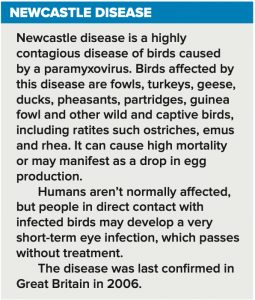 I was interested in how many vets specialise in poultry and David told me that when he started, there were about twelve which was just about sufficient for commercial poultry at that time. The number has increased as has the number of commercial poultry. I wondered if there was more of an incentive now so many more people are keeping chickens partly for eggs but also in a more companion type way.

DO ALL VETS GET TRAINING IN POULTRY?
David said that the amount of specialist poultry training varies from university to university and depends on the interest too of the student. He explained that veterinary training was very largely appropriate to all species on a broader level and they are trained to look out for things that are not right and use the experience of how biology works to work out the possible cause. In addition to that the spread of disease between both animals and humans is broadly similar in all species so it’s then a question of working out how their management is contributing to spread. The training on specialist animals is on top of this broad foundation and all vets should be able to spot disease and instigate treatment in most species. When you specialise in poultry you have to learn more on nutrition and management.

However, there is access to more specialist vets if a vet needs to take it further and David himself is just such a consultant.

THE BENEFITS OF COMMERCIAL POULTRY RESEARCH DOES NOT ALWAYS TRANSLATE TO SMALLER FLOCKS
Nearly all commercial hybrid types will be vaccinated when purchased.
But vaccinating back yard birds is not straightforward. We are now all experts in the logistics of covid vaccines, how some vaccines have to be kept cold, and some are live. The same applies to poultry vaccinations and as yet, they do not come in small batches but are geared towards large farming operations. To vaccinate small flocks of poultry, these are the logistics that have to be overcome, something that in the light of the continuing spread of avian flu, will have to be addressed at some point.

David feels that commercial poultry are well ahead in the control of internal worms and that faecal samples from backyard fowls are often remarkable in the large numbers of species of worms in them. Again there are not many options to the small flock owner for really small doses of worm treatments and knowledge of the need to worm poultry is not always well broadcast. He really wishes that poultry keepers would collect faecal samples at least twice a year and get them tested for worms as horse owners do. The cost would be around £15 a sample but the value to the whole flock would be way beyond that. Unlike horses, the sampling is easier as you collect from the general flock, not form a named individual. He’s promised to give more information on this in future vet advice. 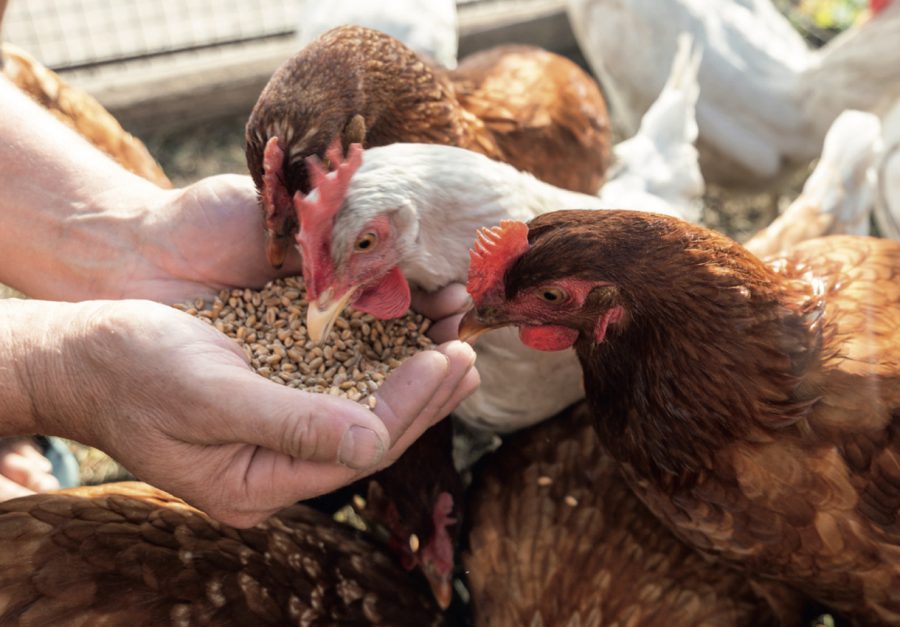 Having written for Practical Poultry for many years, David reflects on the need to challenge himself to give out quality, proven information and to check what you think you know.

“Sometimes, “ says David, “ I feel I am giving out the same information but there are many new poultry keepers and existing ones sometimes need to challenge themselves to continue with the highest standards of management and veterinary advice. It’s all too easy to take what is said on social media and not put in the checks needed to interrogate the value of what is being said. As an example, David feels that claims for herbal/homeopathy sometimes exaggerated although he believes in the benefits that cider vinegar has as a natural sanitiser.

ARE WE RIGHT TO WORRY ABOUT AVIAN FLU?
“The short answer is yes” says David.
“ For many years we hardly saw a case of avian flu, maybe at most one every ten years. We were more worried about Infectious Bronchitis and it took the thick end of twenty years to get it under control. It was lethal as it would cause drop in egg production and the birds would never recover. There was a different strain of IB every couple of years. Later on a new strain, IBQX was first picked up in back yard poultry and resulted in development of a new vaccine. Avian flu too changes, which means that vaccinations have to keep changing. “

I’d sent David the recent statement by The Wildlife Trusts on Avian Flu. He said sadly what they were saying was far too true and an accurate portrait of the sad situation. Part of the statement is boxed below but you can read the full one on their website. 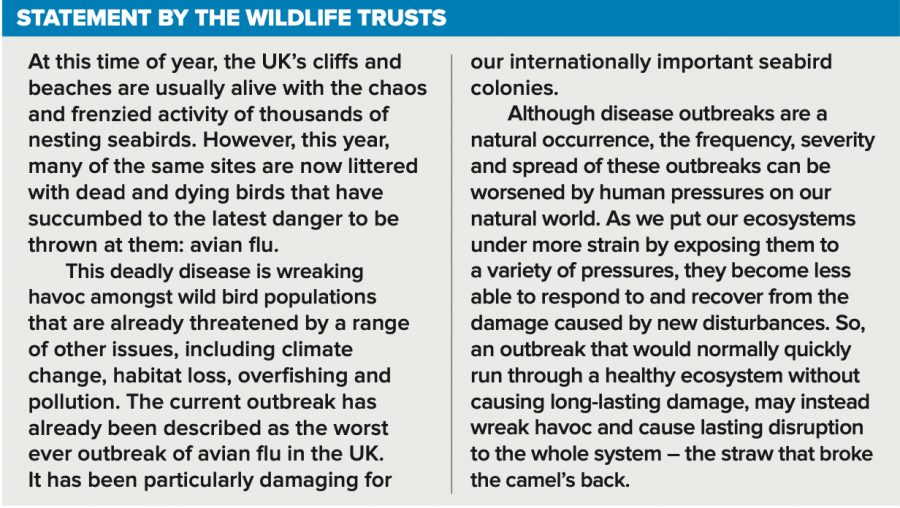 WILL WE EVER VACCINATE?
David thought that zoological collections will have to eventually but the logistics
of delivering the vaccine, as previously discussed, will be horrendous. Clearly there will have to be a plan to deal with this threat to wild birds, domestic birds and of course, the poultry industry and for many of us, a vital food supply.

HOW CAN SMALL FLOCK OWNERS PROTECT THEIR BIRDS AND OTHERS FROM AVIAN FLU?
“The best thing that any small flock owner can do is not to over stock. It is vitally important that they identify areas where they can keep flocks separate from wild birds and be able to house the flock as soon as they are told to by DEFRA. Also know your birds. By the time I see a bird they are often nearly dead – birds are good at hiding things. Backyard owner should come into own as they can get to know their birds. ”

So why can’t David keep poultry himself – although I am beginning to work it out by now.

“I can’t keep poultry because of the nature of my job. My bio-security going into flocks has to be really excellent and keeping birds at home would endanger this. If I could keep fowl, I think I would keep Khaki Campbell ducks rather than chickens!”