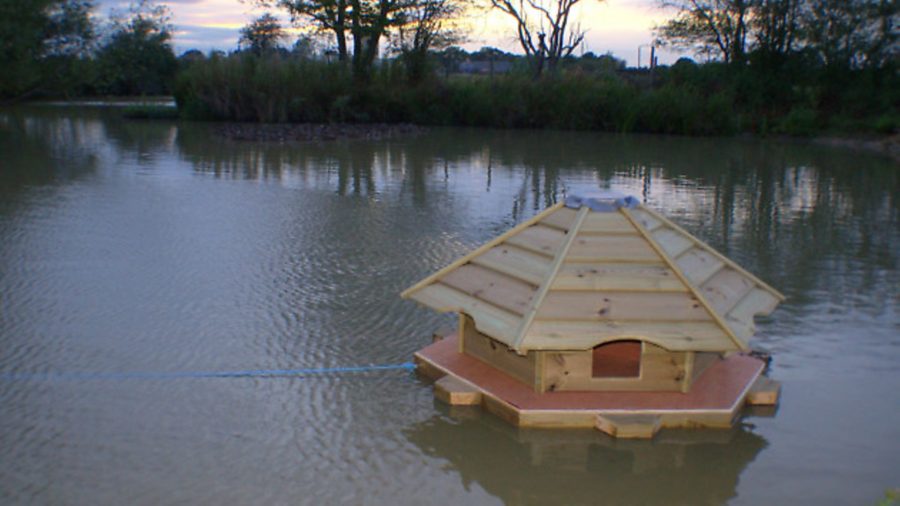 Dan Cherry is a leading supplier of housing for chickens and other livestock. He talked to John Wright 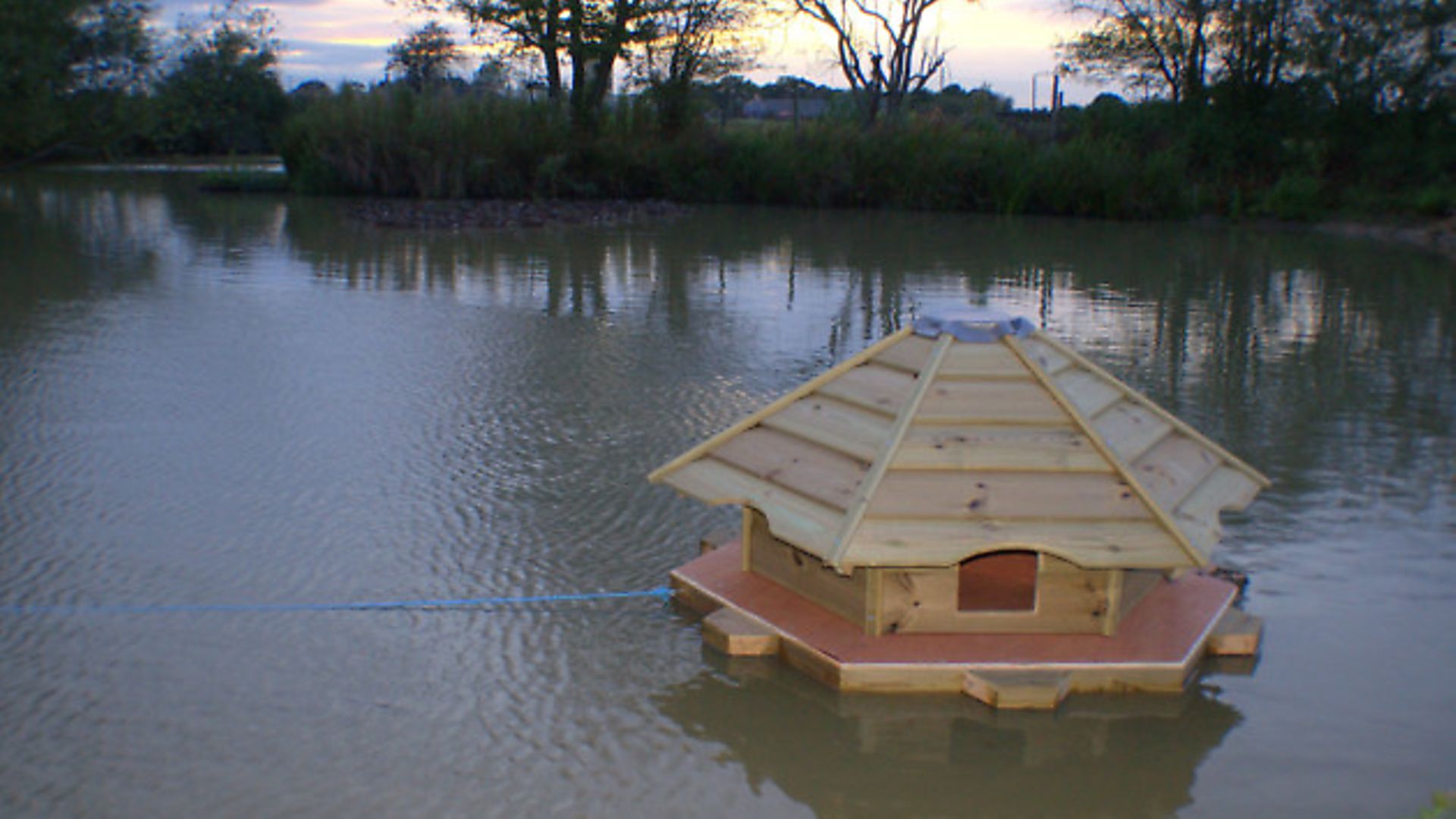 Anyone called Dan Cherry who comes from the fruit-picking haven of Kent can be expected to make the most of his business name. Dan had eight years of working with a large manufacturer of chicken houses and dreamed that one day he would set up Cherry Acres Animal Housing and go solo…and five years ago he did just that.

Describing the good-humoured Dan ‘busy’ hardly covers it. As a one-man-band, he is here, there and everywhere – making, delivering, installing (for free), showing or marketing. And if he’s not in when you call, it’s not long before your phone rings. As well as houses for chickens and ducks, carpenter/joiner Dan makes mobile field shelters, nest boxes, bird tables, dovecotes, donkey or pony stables, goat sheds and pet houses (Orinoco Cat Chalet anyone?).

“One customer told me she’d been sold an Egyptian tortoise that would grow no bigger than her hand,” Dan tells me, “until the vet explained it was an African spurred tortoise that grows to about 3ft (90cm)! So I made her a giant tortoise house.” His poultry houses are hand-made and can be standard designs or tailor-made.

He uses pressure-treated imported Scandinavian Redwood joinery-grade pine; and for smallholders who don’t like the grey look it weathers to, he suggests they apply an annual coat of yacht varnish. He feels that it’s better than creosoting hen house interiors as a deterrent for red mite. “It seals every area and makes it easier to clean,” Dan says. He concedes that plastic hen houses are easy to clean, but there are nooks and crannies even in a plastic coop where they can go.

“I have had customers with hens for years who have never found red mite and some just starting who get them immediately. People have to take the usual precautions such as Poultry Shield and red mite powders.” Dan says that customers should buy plastic houses if they prefer them, while suggesting that one advantage of timber houses (he has about 10 designs) is that they are more easily custom-built.

“Another customer had a vision of a dream poultry house. She wanted to buy battery hens for it and had seen one like a Spanish villa. So I made her a white one, 5ft (1.5m) by 12ft (3.6m) (run and house), adding extra space, a nest box with underneath storage box and covered area for feed. Customers have said ‘I could live in that myself!’ I’m doing another soon for a stockist who is doing a show.” 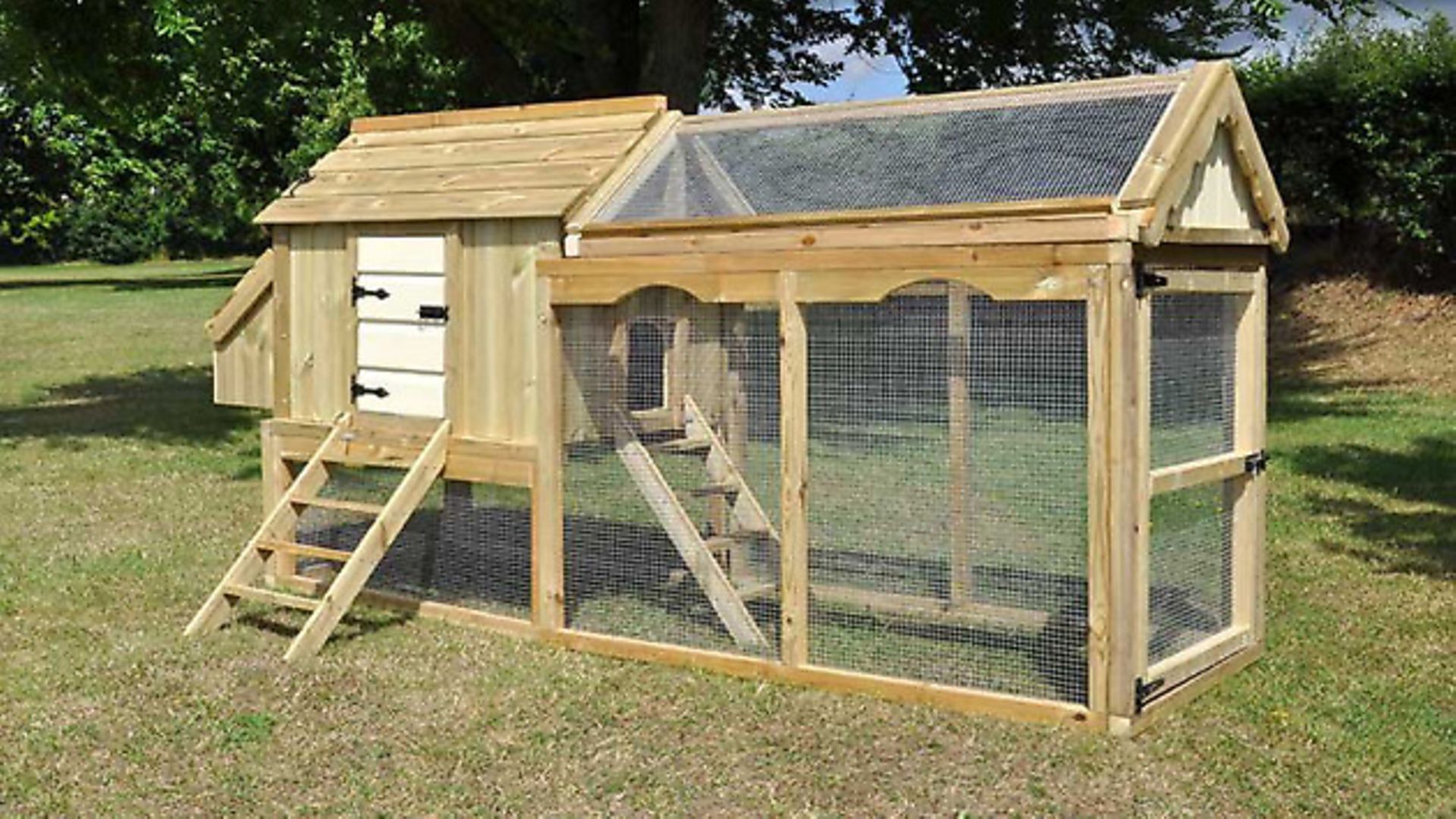 The Acres Cottage design has been Dan’s biggest seller. A simple house with a gabled roof, elevated with steps up, and next to it often a run with a matching mesh gabled roof. Or the roof can be shiplap for extra strength in case it needs to be installed under fruit trees so it can withstand windfalls. “I’ve made it with a walk-in run, different orientation, a longer run, nest box on the side or sliding pull-out tray for droppings that owners can wash and put back.

“I listen to what customers tell me. The Acres Cottage design is easy to clean, high off the ground so no back strain, and has shade. One restaurant/B&B in Somerset bought one on wheels. It has a pop-hole to the run, operated by a drawstring and through the painted side door hens can go and free-range, and it keeps rats out. The nest boxes have sturdy hasp and staple catches so that at night foxes can’t lift them up, and the run is 19-gauge galvanised welded mesh.

“I always encourage customers to think about the future and ask them how many chickens they think they will end up having so that they order a house and run that is big enough. The Acres Cottage holds six-eight hybrids but the standard run only holds three or four birds, or six to eight if they free-range during the day. If they plan to have 10-12 I suggest a bigger house.”

Dan’s customers vary from beginners to those who have had chickens for years and breeders, one of whom is keeping Orpingtons and Wyandottes in theirs. 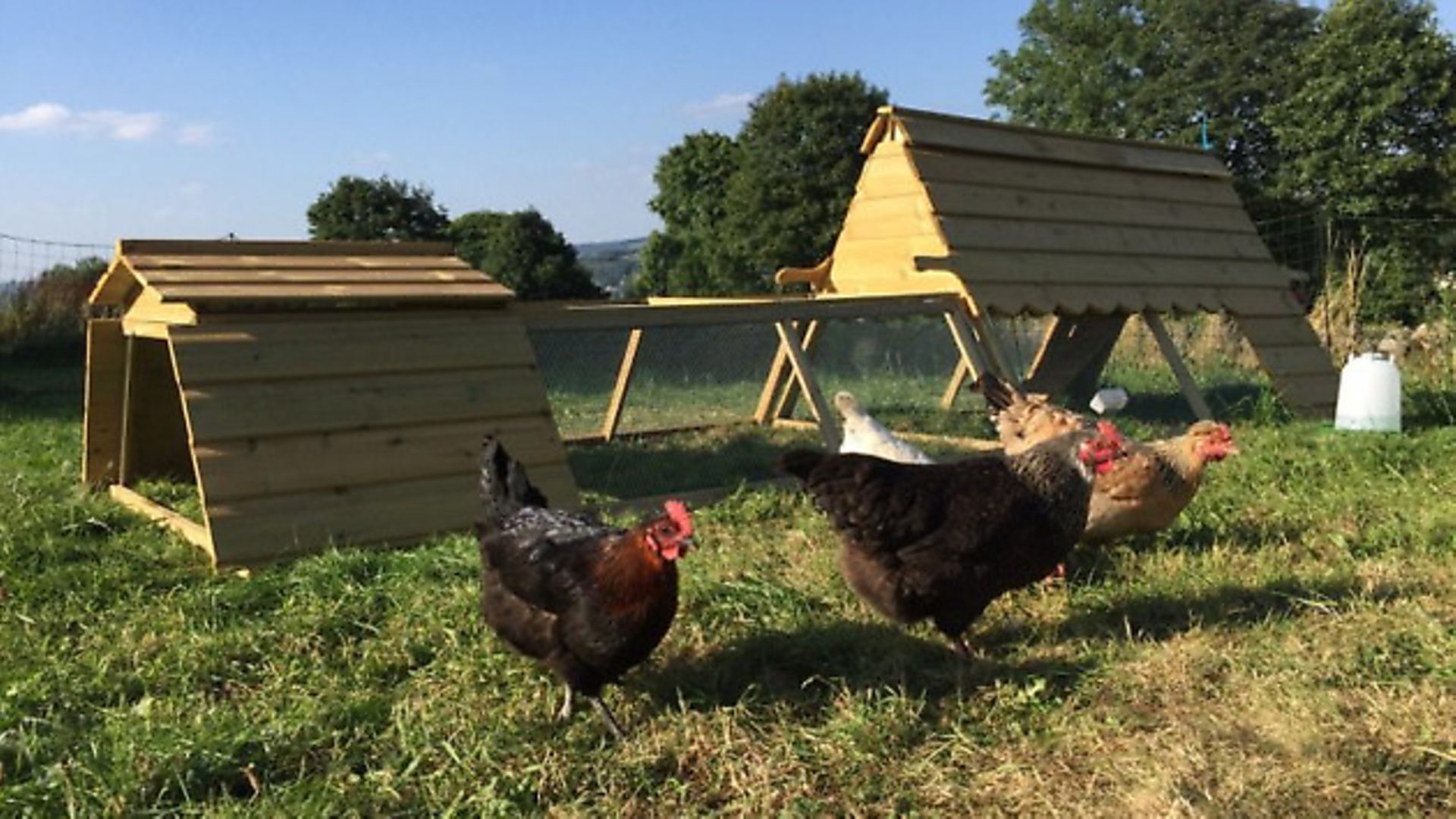 He enjoys the variety in his designs. Noticing that his duck houses float, I imagined a watery Ratty and Mole scenario of ducks sitting on top and flapping their wings to create forward motion so they can range freely around their domain just as chickens can. But Dan spoilt the fantasy, explaining that they are tethered. Some ducks free-range, he tells me, and smallholders have asked him to build an ark to shut them away at night.

A lot of his customers are backyard chicken keepers with three or four hens to keep the family in eggs. Some want a house for egg-laying or for pet chickens that roam in their garden, some for healthy food to eat and some who might, say, also have beehives and like teaching their children where food comes from.

Dan tells me that some customers are so keen on their chickens as pets that their flock has taken over their garden and he has had to install several houses. To Dan it represents a booming trade: the Cotswolds, Midlands, Buckinghamshire, North Wales, Cornwall and Devon having become a solid market recently. “One woman regularly goes to auctions, poultry markets or local breeders to buy more chickens. She started small and soon got bigger.”

It is easy to see why Dan is sometimes working flat out meeting orders. His wife has a full-time job and they have two children. They have a mortgage so they work hard to make that plus his overheads every month. “It’s feast or famine when you’re a smaller operator in the industry,” Dan explains. But he loves his work and has learned to make hay while the sun shines and put money away for a rainy day. His busiest period with poultry houses is February to September, after which his dog kennel work kicks in. “I do more work like that in winter because lots of people have guests staying and they want their dog properly housed, and horsey people need field shelters. Last year I was delivering up to Christmas Eve.” 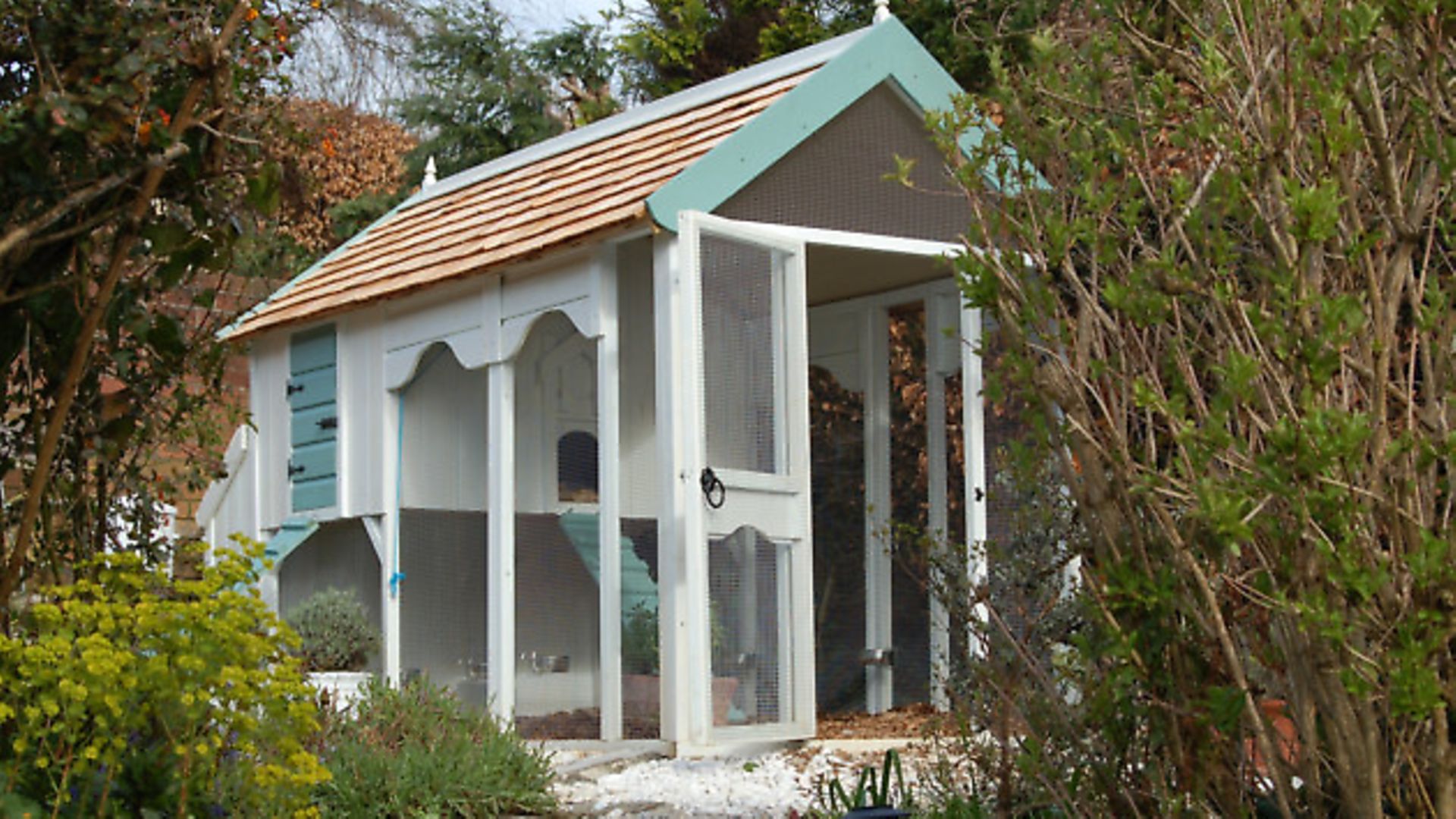 Dan usually makes a chicken house in seven to 10 days and recognises the value of promotion. “Shows are good for me,” he says. “That’s how the Acres Cottage was launched.” He remembers the Stoneleigh Park Pet Show in Warwickshire in 2012 where he sold five at the show plus taking orders for some and finding two more retailers to stock them. He now has some 14 retail stockists around the UK that buy his houses, including garden centres, farm and country stores and pet shops.

When he gets phone calls it is generally for the Acres Cottage or an ark (8ft (2.4m) x 4ft (1.2m)). “Some like the ark with a sheltered end,” Dan says, “so that the hens can get out of the sunshine or rain and have somewhere to keep the feed fresh. Or if customers have a sick bird they can put her into the run with the shelter.” He does get funny requests. “One retailer bought meerkats for his pet shop and needed an enclosure for them. I have done bigger fancy coops, one customer asking for one 20ft (6m) long x 10ft (3m) with the run all painted in Farrow & Ball paint. Variety doesn’t faze me. Another asked for a 12ft x 6ft system for rabbits!”

Customers are always quick to thank Dan and post pictures on social media of what they have done to his chicken house, one erecting a grand slate sign saying, ‘Cluckingham Palace’. He also gets lots of emails or calls with messages such as ‘Chickens are fine and the coop’s still going well after a few years’. Heartwarming reactions like that keep Dan Cherry going and, by the way he talks, he passes the customer test that he is a man who wants to do the best possible job. 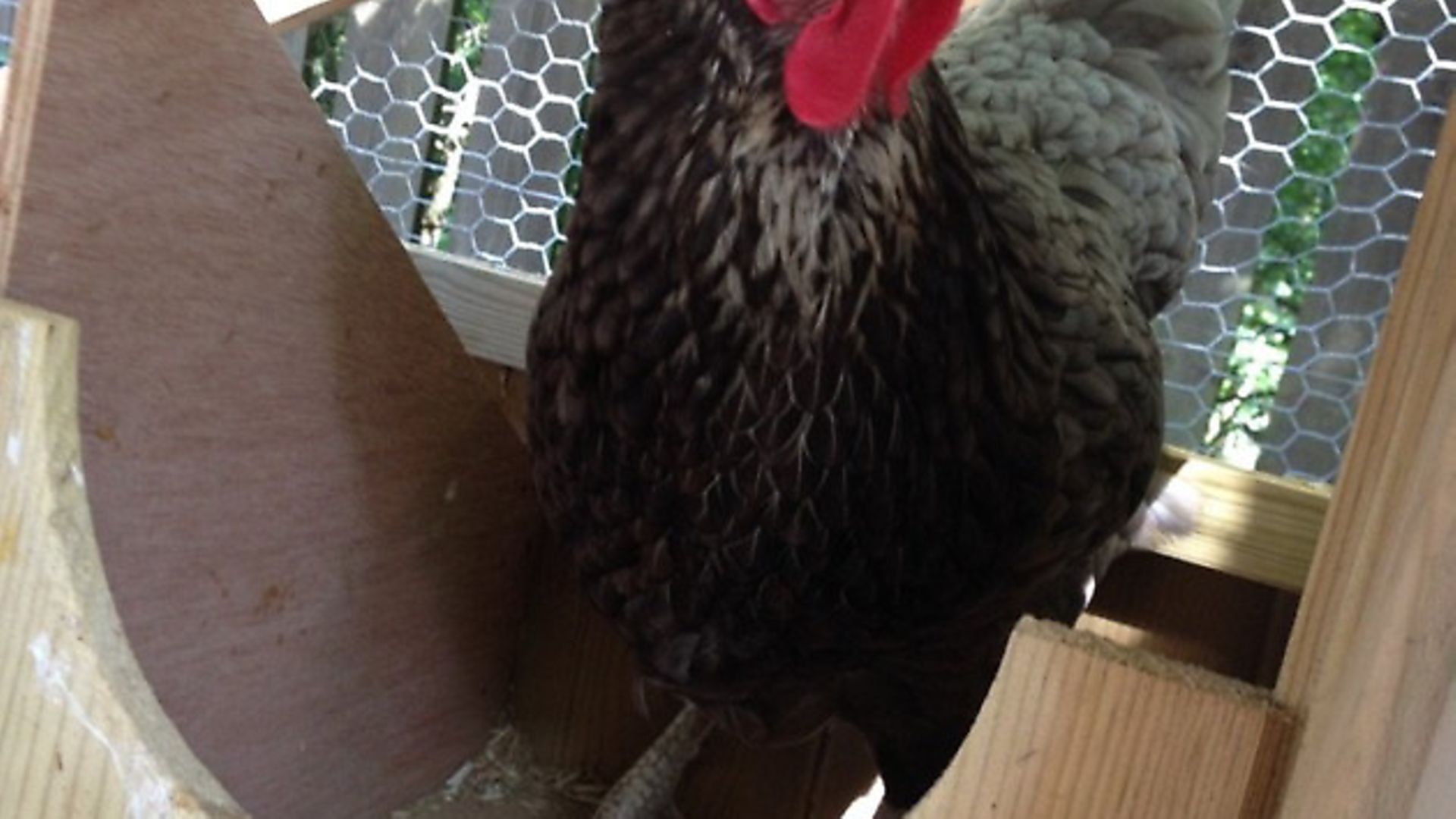