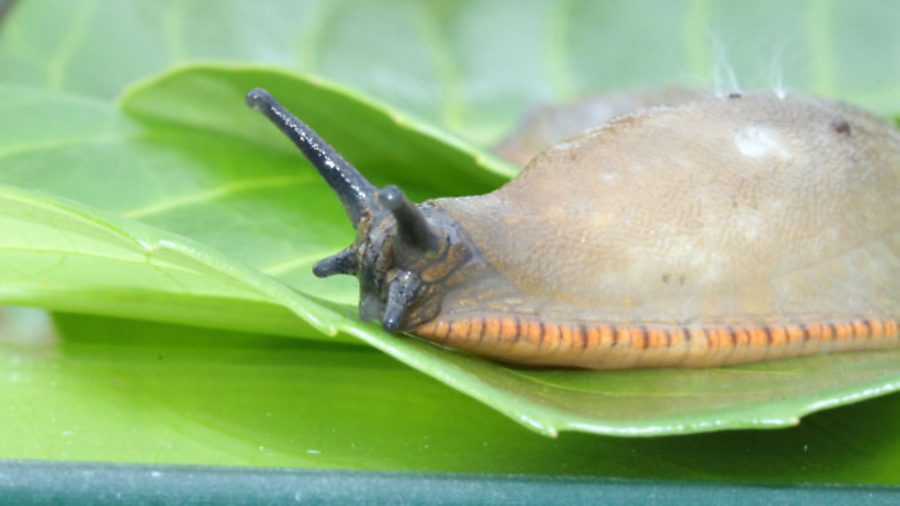 Aim to control numbers, not eliminate them

Although most snails become dormant during the winter months many slugs will remain active down to 50c – a temperature frequently encountered outdoors in winter and almost a constant minimum where crops such as broad beans, sweet peas etc. are overwintered in polytunnels and glasshouses. For this reason, and to minimise problems next year, it is worth beginning your slug control strategy now rather than waiting to become overwhelmed in spring.

Slugs are gastropods, quite literally a stomach and a foot. As this suggests they move about and they eat, mostly at night, but anytime wet and mild conditions prevail. Most damage is caused by a relatively small number of species with the majority quietly performing their role as primary decomposers helping convert organic matter into the humus and nutrients essential to plant growth. These few species, however, cause millions of pounds of damage to commercial crops every year not to mention the mass outbreaks of rage and frustration amongst the many others who suffer the effects of a single night`s attack from a few slugs.

Begin by accepting that slugs play a valuable role in the natural environment and that even the severest control regime is unlikely to eradicate them entirely. The aim is always to control their numbers to acceptable levels rather than elimination.

Slugs are random feeders i.e. they bump into food sources rather than hunt them down and tend not to travel more than a few metres in a night before retiring somewhere dark, damp and undisturbed where they will lose moisture less rapidly. Reduce the number of potential daytime refuges by carrying out a thorough winter clean of polytunnels and glasshouses. Clear out any debris plus the junk which these structures inevitably get filled with over winter. Next, remove the pots, trays, sacks and other growing equipment to another location and place a one or two roof tiles around to where any remaining slugs will gather during daylight hours. Collect them up each morning and feed them to the chickens.

Next, target your efforts. Many crops, such as cabbages and sprouts, can withstand a few nibbles whilst others can be devastated over the course of a night. Soft, succulent leaves such as seedlings, lettuce and other salads are prime targets and thus need the highest level of protection.

Although beer traps etc. do work handpicking, with the aid of a torch, for a few evenings quickly reduces numbers to tolerable levels. Supplement this by standing trays of seedlings on gravel which drains quickly and slugs find difficult to traverse. Finally use grit, crushed eggshells and coffee grounds as barriers around each plant. Outdoors, use winter soil cultivations to reduce population numbers. Rough dig all uncropped ground in early autumn, exposing as much of the surface area to the winter cold as possible. In addition to improving the workability and drainage of heavier soils this will also expose pockets of slug eggs to predators, frost and ultra violet radiation. Thoroughly cultivating the soil again in spring will disrupt the peak breeding time of many damaging slug species such as the field slug. When conditions allow, regularly hoe the surface of soil to aid rapid drying of the surface and control weed growth and any excessive vegetation surrounding areas of susceptible crops.

With methiocarb now effectively banned across most of Europe growers are left with a choice of those based upon metaldehyde (the commonest type) or ferrous-phosphate. Although both types can be equally effective the former is not allowed under organic growing systems due to the toxic nature of its active ingredient which has been implicated in damage to wildlife, domestic pets and water contamination. The use of slug pellets based upon ferrous sulphate is partially permitted within organic systems as the active materials are considered to have low toxicity and are usually present in most soils in lower concentrations as the plant nutrients iron and phosphorous. There are concerns in some quarters that although the iron and phosphorus may be relatively harmless, other ingredients, such as EDTA, which are added to improve the effectiveness of the product may lead to poisoning in other animals and humans. Whichever material you choose, both organic and conventional advice is that an integrated approach to slug control, utilising a broad range of techniques, provides a higher degree of control than sole reliance on slug pellets of one sort or another.