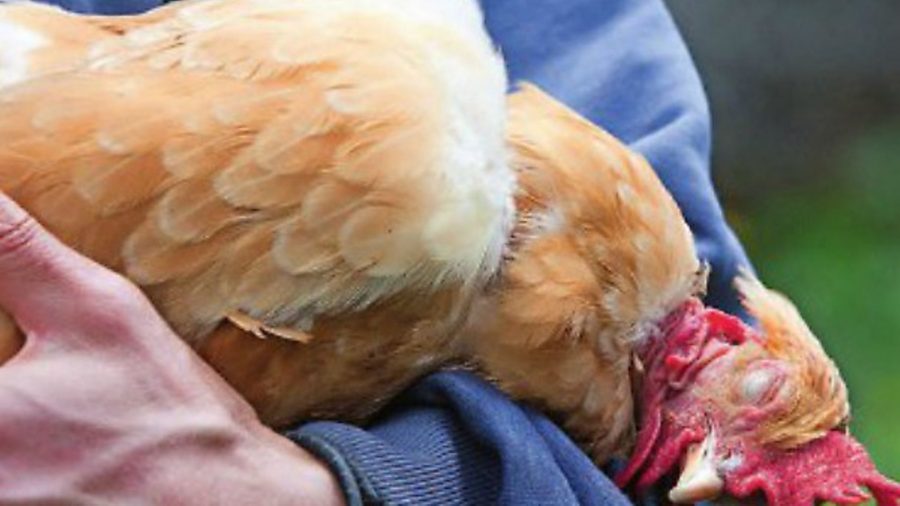 You can tell a huge amount about your chickens from their body language, here we discuss chicken body language and how to read it 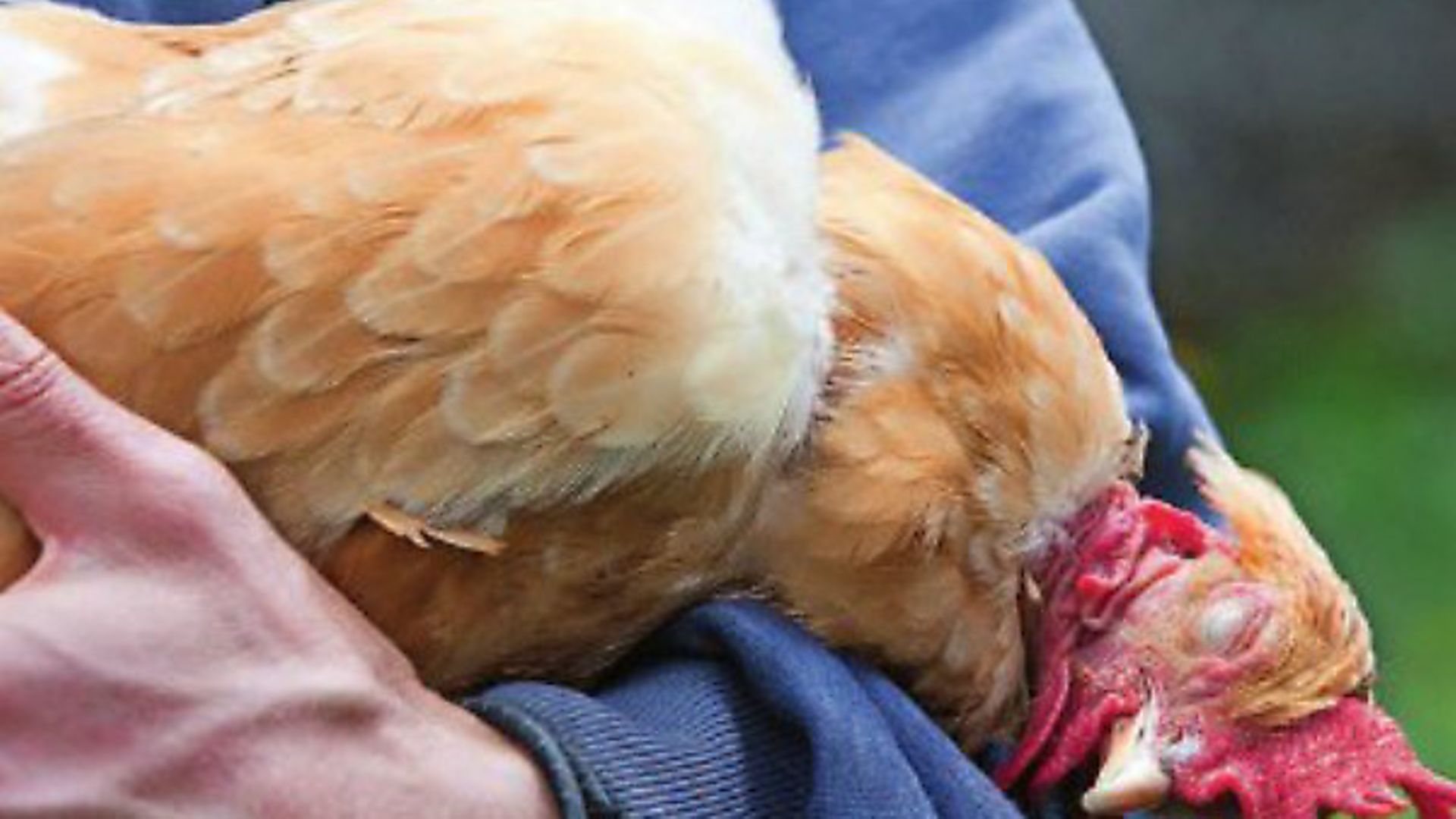 Chicken communication is complex. Scientists and those who observe their own flock closely have learned that these birds can be deceptive and cunning.

Communication isn’t just vocal; chickens have a repertoire of visual displays or body language to communicate a wide range of information. Chickens use sophisticated signals to convey their intentions – when making decisions, they take into account their own prior experiences and knowledge surrounding the situation. Scientists recognise that their communication skills are on a par with some primates.

The Oxford Dictionary defines body language as ‘the conscious and unconscious movements and postures by which attitudes and feelings are communicated’. Body language can be expressed by physical behaviours such as facial expressions, body posture, gestures, eye movement, touch and the use of space. 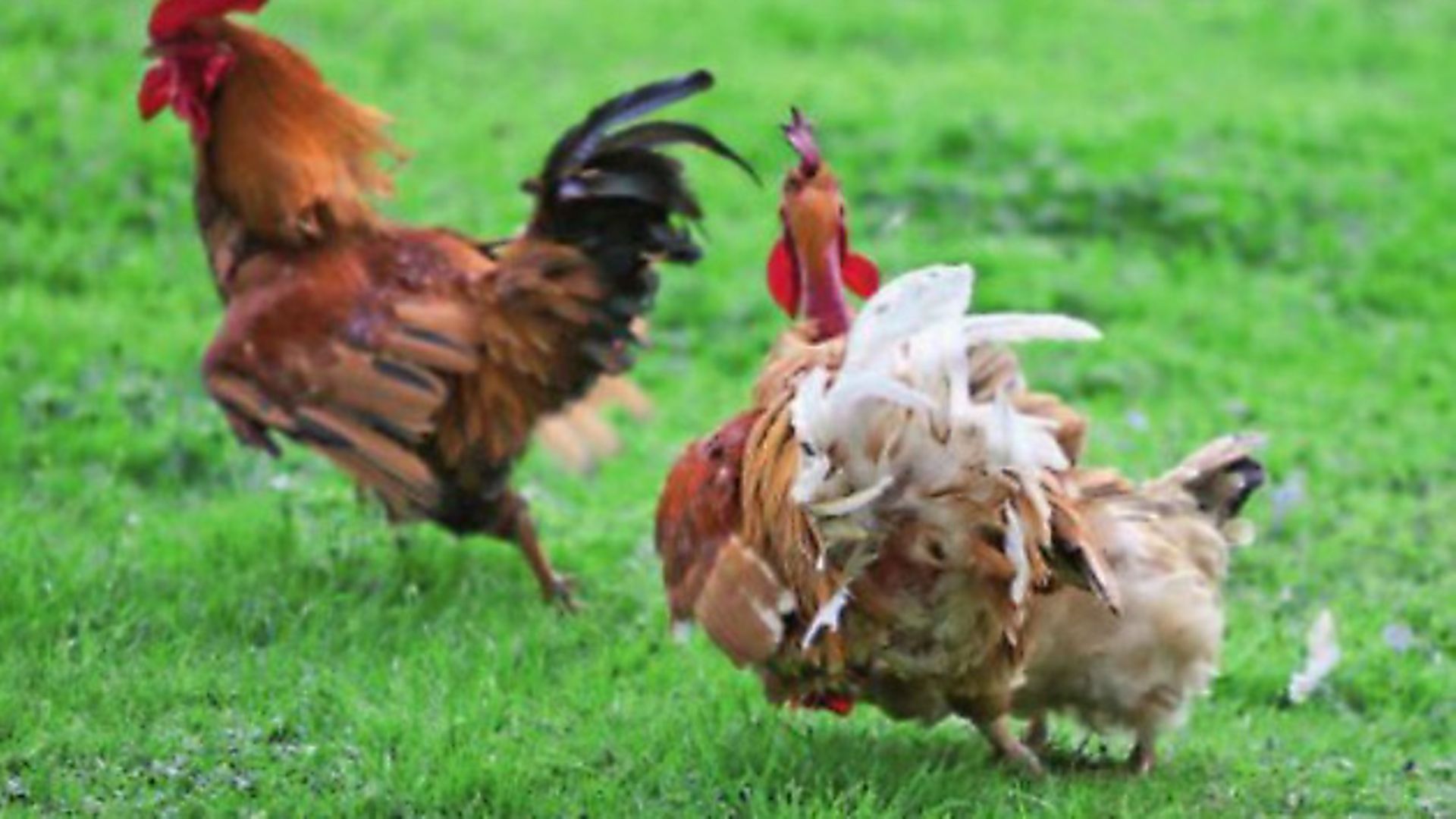 As flock birds, chickens have a complex social hierarchical system in which there is a ‘pecking order’ for both males and females. Each individual has a specific social status which is recognised by the other members of the flock. This order of social dynamics influences many activities including: feeding, drinking, egg laying, mating, roosting and dustbathing with the dominant individuals typically having primary access to food, shelter and mates. 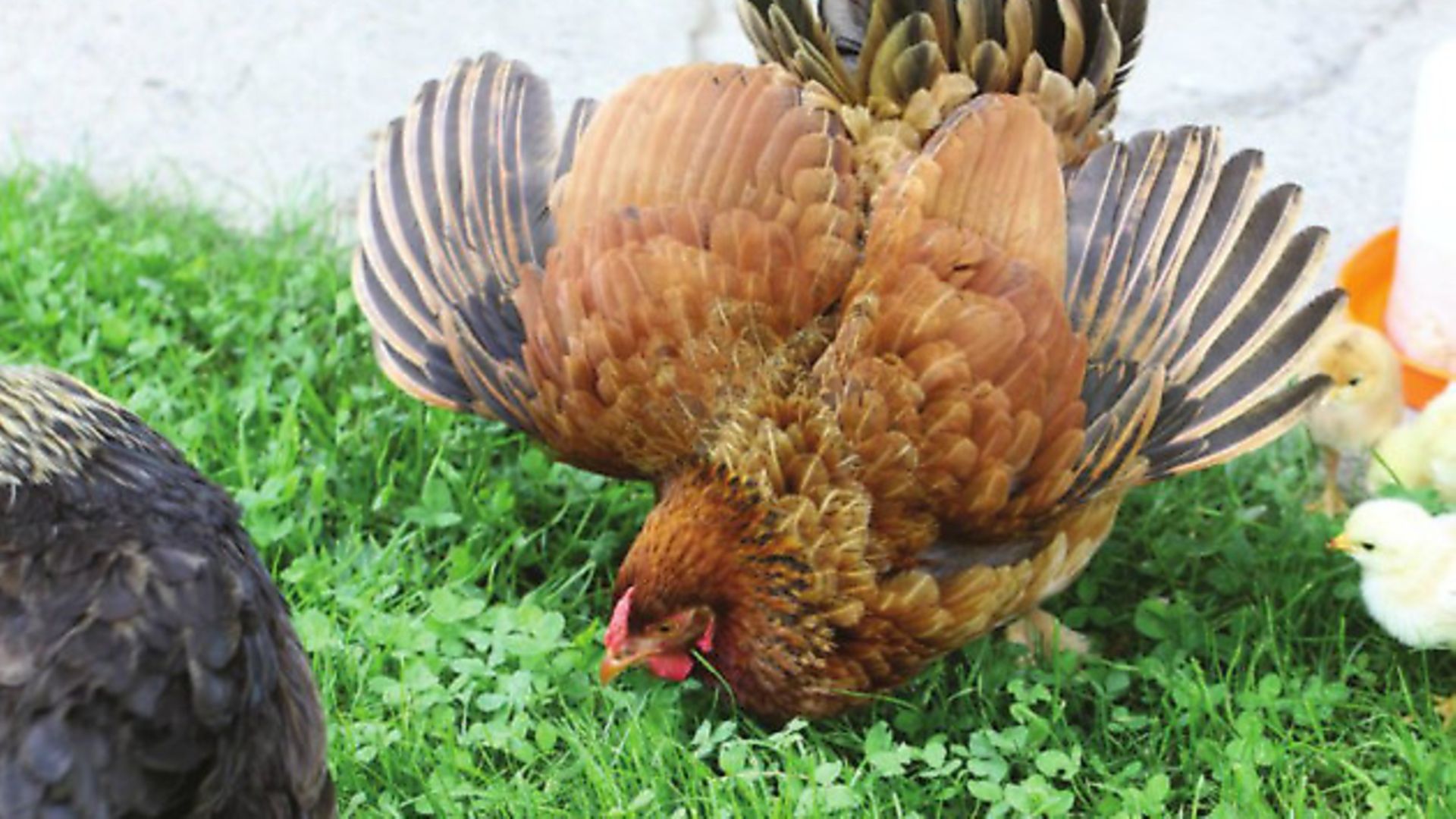 The pecking order is often established and leadership reinforced with a sharp peck on the head or neck from a dominant chicken to a lesser bird. In small close-knit flocks with ample food and space, strong competition is usually unnecessary – I’ve observed principal hens initiate a peck without force or the intention to make contact, but the message is understood!

Other body language is used too. Loud wing flapping with the head held high and the chest puffed out conveys dominance, whilst flapping with a lowered head and running in the opposite direction of the opposing chicken is a way for one chicken to show submission without any physical contact. Flaring hackle feathers with the head lowered is an intimidation technique used by roosters/cockerels and hens/pullets alike.

If neither chicken backs down, a fight is likely to ensue, the severity of which depends on how determined each bird is to become higher ranking. Two birds on the verge of a fight will eye each other, often casually circling around each other, pretending to peck at something on the ground whilst watching the other. The fight begins when the birds raise their hackle feathers and point their wings towards the ground, spreading them apart from their body whilst standing as tall as possible and trying to face their opponent down. If neither bird backs down, they will start pecking and jumping at one another, beating each other with their wings. Crouching or running away shows submission. 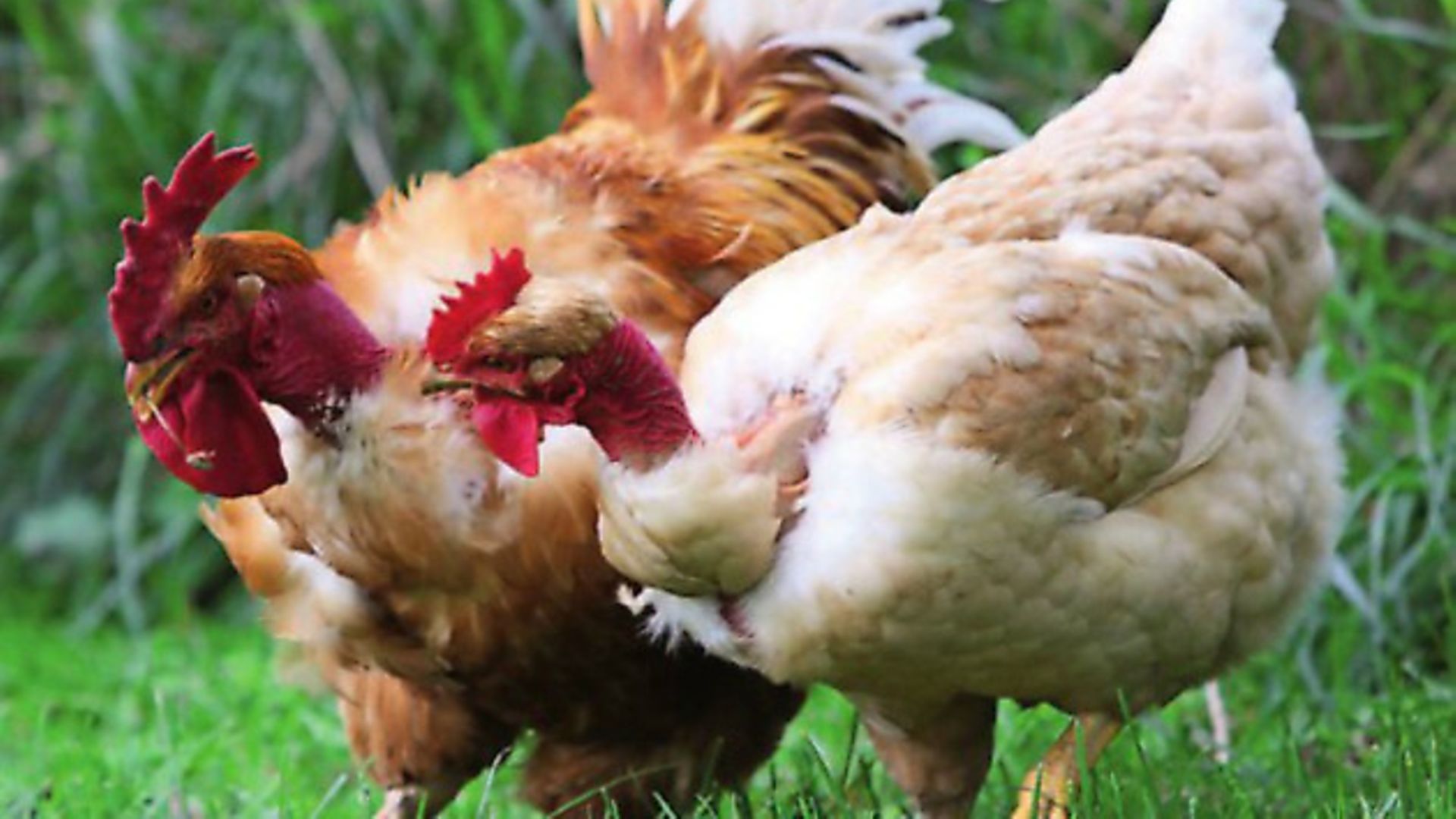 However, dominancy may come at a price. The dominant male must always remain vigilant, not only to protect his favourite hens but to ensure that the subordinates don’t get any ideas above their stations and challenge him for the leadership. Carrying himself tall and erect with chest puffed out displays authority and leadership. The only times that I have witnessed my alpha rooster ‘relax’ his body stance is in the presence of my own company, but even then, he will still alarm call, if necessary.

New birds introduced to an established flock are often subjected to aggression as they learn the order within the flock. This can be simply using eye contact or in the form of face to face fighting or head and neck pecking or chasing the new bird away.

Body stance and head position are important during pecking attacks. The dominant bird will raise its head above the level of the other bird’s head and then peck at the comb, head, neck or wattles. The subordinate freezes on the spot with the whole body lowered in submission before retreating. 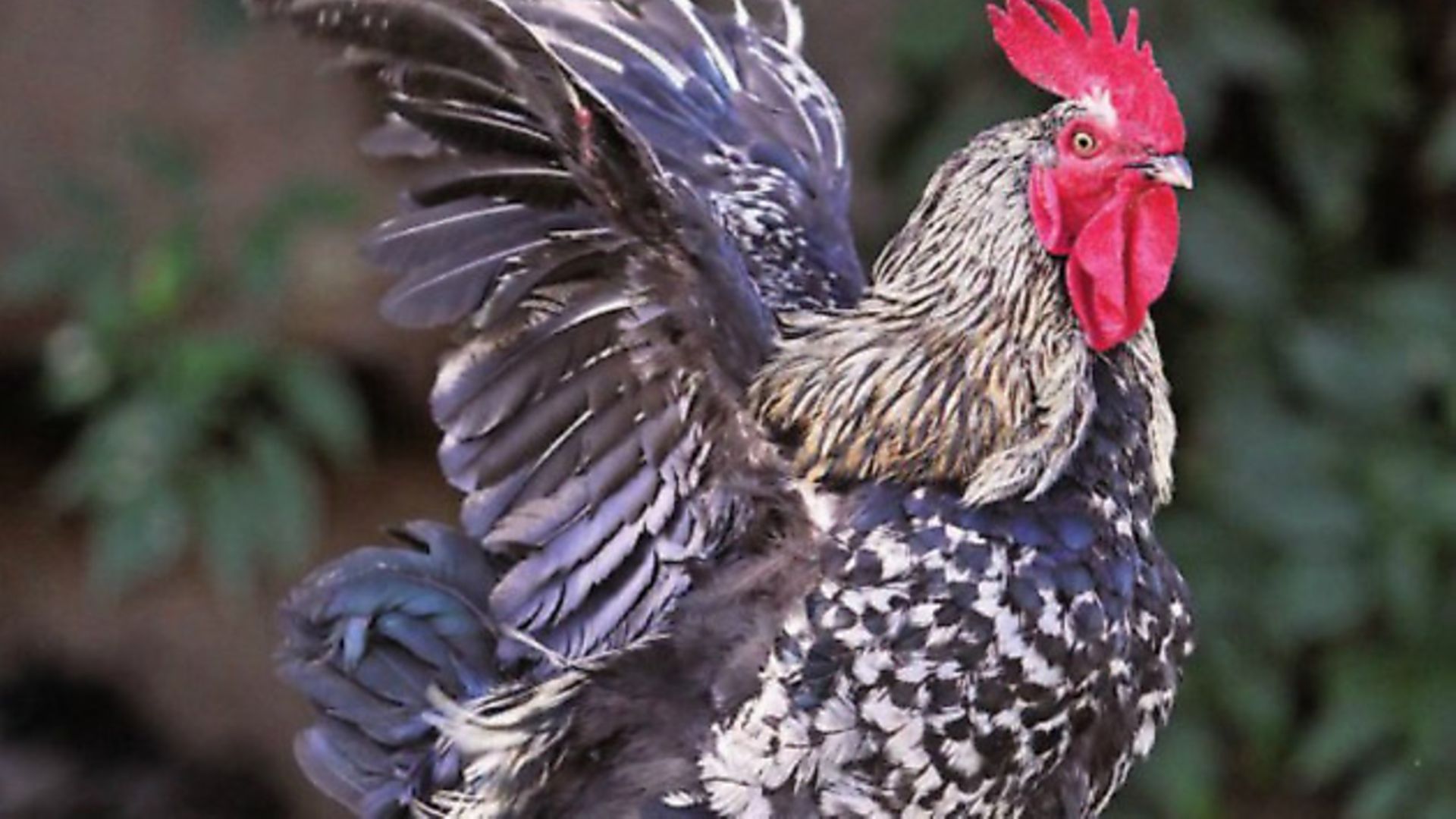 A broody hen uses body language to defend her chicks from predators and other flock members who have invaded her personal space. She will draw herself up to twice her normal height, flaring her hackle feathers and raising her wings outwards. This intimidating stance is enough to make even the most inquisitive bird move away!

Chickens are excellent at hiding symptoms of illness. Their body language can hint that something is not quite right. Tell-tale signs may include standing hunched, with the neck drawn in, feathers ruffled and tail down. However, a number of my hens tend to display this body language on bad weather days to communicate that they’re fed up! Many chicken keepers are tuned in with their chickens’ personalities and know when attention is required.

Chickens communicate contentment through body language. Firm friends will stand touching one another, others will to sit on my lap – I can feel their whole body relax as they settle themselves down and fall asleep.

Once the pecking order is established, there is an acute awareness of personal space. One would expect the dominant females to remain close to the head rooster whilst the subordinates keep closer to the periphery, well aware of the aggressive responses they’re likely to elicit should they invade the personal space of the dominants. However, the social antics of chickens aren’t quite that simple!

Males perform complex visual displays in connection with the discovery of food. The most prominent is a series of actions collectively called tidbitting whereby a dominant rooster food calls and rhythmically repeats movements of his head and neck, including picking up and dropping a food item. A female will come over to take the piece of food – if she squats, it is an invitation to copulate. Tidbitting is the main way he lures a mate.

Body language is often used in conjunction with vocal sounds to convey specific information which is understood by other chickens. When an alarm call is raised alerting the flock to the presence of a ground predator, the language will be understood without the listening birds seeing the predator. The bird alarm calling will face the direction of the danger, as though pointing to it for others to observe. Flock members respond by standing erect, scanning the horizon and may flee for cover or fly into nearby trees. Ground predators hunt using ambush techniques and are more likely to terminate a hunt if detected, so it’s important for the flock to openly display their awareness.

As aerial predators rely on speed of attack from a distance, a slightly different tactic is adopted by the flock. A rooster who has spotted an overhead threat will crouch down and turn his left eye to the sky to watch the threat whilst the right eye is watching his mates and rivals. A female’s response to an aerial predator is to crouch down and sleek her feathers, as though trying to make herself invisible. She will only flee once the predator approaches.

Body language is a product of evolutionary development and encompasses far more than the scope of this feature. Chickens touch and gesture, just as you and I do. As chickens are able to remember and recognise more than 100 individuals, humans included, consider that you are part of their flock, perhaps the ‘super alpha’. Although my hens learn my vocal commands, knowing what comes next (a treat or movement), it is my own body language they respond to better. It always amuses me that I only need to touch my gardening fork or wheelbarrow and they all run or fly to me and follow me to the vegetable patch!

Next month: Do chickens really feel emotions? We hear from our ‘chicken shrink’, Dr Nicola Davies, and other experienced henkeepers.