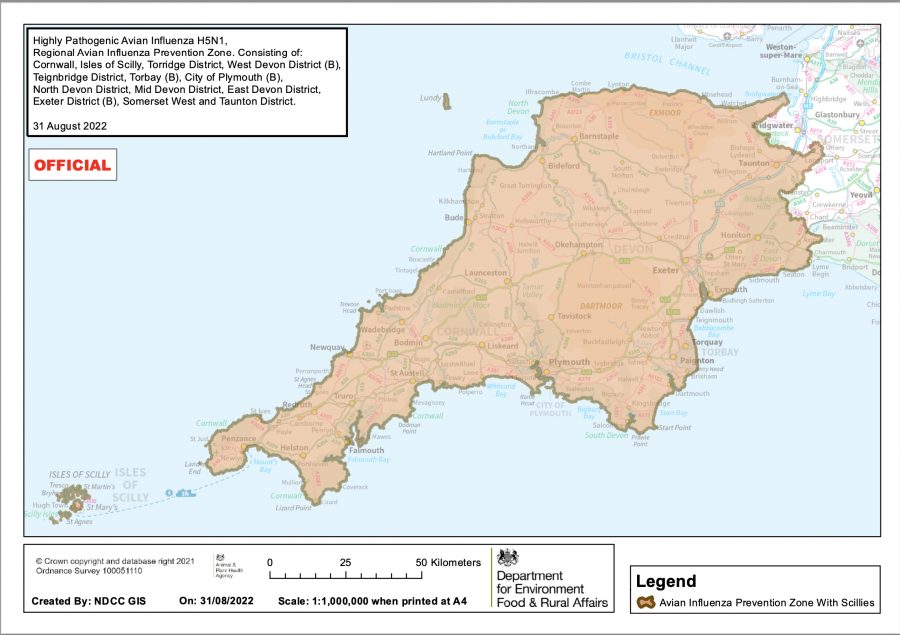 Following a number of detections of avian influenza in poultry and wild and captive birds across Devon, Cornwall and parts of Somerset, the UK’s Deputy Chief Veterinary Officer has declared an Avian Influenza Prevention Zone (AIPZ) across the region to mitigate the risk of further outbreaks of disease occurring.

This means that from midday from Wednesday 31 August it will be a legal requirement for all bird keepers in Devon, Cornwall (including the Isles of Scilly) and parts of Somerset to follow strict biosecurity measures to help protect their flocks, of whatever type or size.
Backyard owners with small numbers of poultry including chickens, ducks and geese must take steps to limit the risk of the disease spreading to their animals.
Additionally, keepers with more than 500 birds will need to restrict access for non-essential people on their sites, workers will need to change clothing and footwear before entering bird enclosures and site vehicles will need to be cleaned and disinfected regularly to limit the risk of the disease spreading.

The UK Health Security Agency continue to advise that the risk to public health from the virus is very low and the Food Standards Agency advice remains unchanged, that avian influenzas pose a very low food safety risk for UK consumers. Properly cooked poultry and poultry products, including eggs, are safe to eat. 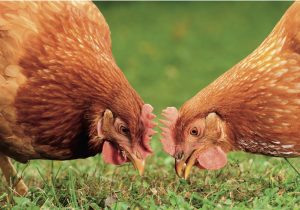 The UK has faced its largest ever outbreak of bird flu with over 130 cases confirmed across the country since late October. The introduction of this regional AIPZ comes after the disease was detected in captive birds at nine premises across the south-west region since last month, as well as several cases in wild seabirds.

UK’s Deputy Chief Veterinary Officer Richard Irvine said: “Following a number of detections of avian influenza we have declared an Avian Influenza Prevention Zone across Cornwall, Devon and parts of Somerset. This means that all bird keepers in the region must take action now to both prevent disease getting in to flocks and it spreading any further.

“Whether you keep just a few birds or thousands, you are now legally required to introduce higher biosecurity standards on your farm or small holding. It is in your interests to do so in order to protect your birds from this highly infectious disease.”
The introduction of an AIPZ follows the recent increase in cases of bird flu in poultry and other captive birds in the area and increased reports of mass mortality in wild birds.
The AIPZ now in force across Devon, Cornwall and parts of Somerset does not include a requirement to house birds. However, this is being kept under constant review. Further disease control measures will be based on the latest scientific evidence and veterinary advice.
The AIPZ means bird keepers across the south-west region of England must:
The prevention zone will be in place until further notice, and will be kept under regular review as part of the government’s work to monitor and manage the risks of bird flu.
Poultry keepers and members of the public should report dead wild birds to Defra’s national dead wild bird helpline on 03459 33 55 77 (please select option 7) and keepers should report suspicion of disease in their birds to APHA on 03000 200 301. Keepers should familiarise themselves with Defra’s avian flu advice.
Defra has also set out practical guidance to support land managers, the public and ornithological and environmental organisations in their response to the growing threat of avian influenza to wild birds. The ‘Mitigation Strategy for Avian Influenza in Wild Birds in England and Wales’ sets out how these groups, together with the government and its delivery partners, can mitigate the impact of avian influenza on wild bird populations whilst protecting public health, the wider environment and the rural economy.
More news like this can be found in The Country Smallholder magazine. Subscribe here.