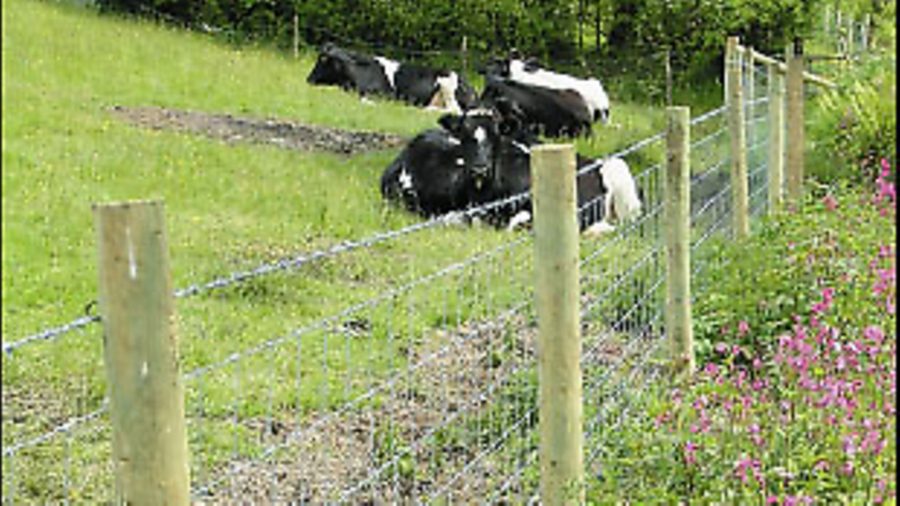 Our smallholding has one boundary that runs fairly straight and level for most of its length alongside a road, where it’s especially important to prevent livestock straying. I put up a fence of sorts along the roadside hedge when we first moved here 18 years ago, but time takes its toll and when I came to lay this hedge for the second time last winter, the wire was sagging and posts were starting to rot in the ground. I decided to dismantle the entire fence and replace it with a more substantial strained wire fence once the hedge had been laid. Here’s how I tackled the job.

PlanningI started by walking the boundary to assess the task and determine the precise line that the fence would take. The intention was partly to protect the laid hedge, so the fence needed to be at least four feet clear of this, otherwise cattle would reach over to graze the regrowth, as I have learned the hard way. A shallow drainage ditch ran along the field side of the hedge for much of its length, so the fence also needed to protect this, otherwise livestock (especially cattle) would damage and eventually fill in the ditch by trampling. I looked for soft ground and marshy patches that might prevent a solid fixing for straining posts, and I tried to avoid any change in direction at such areas, even if this meant diverting slightly from the obvious fence line. I also looked for significant dips or hollows in ground level that a slight diversion might avoid, or at least reduce to acceptable limits. I was thinking in straight lines all the time, bearing in mind that every change in direction requires another expensive straining post, so I tried to simplify the proposed fence line at the planning stage to the minimum number of straight runs that would do the job.Once the line was determined, a steady pace along it, at one yard per pace, gave the overall length and I could start working out the materials required.I also made a point of looking carefully at professionally erected fencing in my locality, to see how it was done.

Wire meshWoven mesh stock wire is effective for most situations. It has smaller size mesh at the bottom to prevent piglets or lambs from slipping through, and then larger mesh up to the top. It’s all too easy to overlook this fact when positioning the wire, so take care when you come to fix it. Stock wire comes in 50 metre rolls (about 55 yards) by 80cms wide (about 32 inches) to provide a fence of that height. Additional height, if required, is obtained by placing one or more strands of wire a few inches above this. Stock wire alone is adequate for young pigs, and for most sheep (but not wild or some primitive breeds which may jump over it). Cattle lean over the top and soon flatten fences unless a top strand of barbed wire is added. For goats and jumping sheep, top strands of plain wire are normally used to avoid risk of injury to their udders should they go “over the top”. Adult pigs may need a taut strand of barbed wire at ground level, or an electrified strand low down, to deter them from digging underneath.All fence wire is galvanised, but any break in this coating allows moisture in and the steel beneath will start to rust. With this in mind, it’s worth handling new rolls of wire with reasonable care, and making sure that any second-hand wire is still in good condition. For instance, if the galvanised coating has been bruised every few yards by careless stapling to, or removal from the previous posts, it won’t be suitable for a permanent boundary installation, though good enough perhaps for short-term protection fencing.Contractors often work with high tensile fence wire which is springy, strong, with very little stretch or give under load. Strained really tight between solid posts, this produces the piano-wire professional result, but be warned, it’s not easy to handle and work with. Indeed, high tensile wire is potentially very dangerous under tension, with the risk of whiplash, so in my view it’s best left to professionals. The commonly available mild steel fence wires are more easily and safely worked by amateurs, being softer and less springy with more give. The downside is that they take a permanent stretch when overloaded, so are more difficult to keep tight over time.My own requirement was to contain beef cattle and tame sheep, so I chose standard mild steel woven stock wire, topped by a single strand of barbed wire.

PostsWooden fence posts or stakes are available in a wide range of sizes and qualities. Heart of oak or chestnut will last up to 50 years in the ground without preservatives, but in my area these are not only expensive but difficult to find. Pressure treated softwood stakes are much cheaper and widely available, but they won’t last anywhere near as long, perhaps 15 years on average. It pays to be selective when buying posts. Choose straight ones that have been cut to a central point (not lopsided) and with a square top (not angled), otherwise the post will be difficult to drive in vertically. Posts should also be properly debarked before treatment so that the chemical penetrates effectively, and free from any major splits or faults in the grain which might open up and allow water to penetrate. My own preference is for round posts, as those sawn from larger timber have the grain exposed on the cut faces which is a potential weakness in the long term.For the main strainers, I chose pressure treated round posts with 5 or 6” diameter tops by 7’ long. For each straining post I bought two struts at 3 to 4” round by 8’ long. To support the mesh between strainers I chose posts with 3 to 4” diameter tops by 51/2’ long. Sorry it’s not metric, but that’s how they’re sold hereabouts.

Fixings  For fixing the wire to these posts I used 40mm (11/2”) long galvanised staples. Galvanised 4” nails were handy for fastening struts into position against other posts.I also used some short lengths from a roll of high tensile single strand galvanised wire that I already had, as explained below.

ResultThe result of all this was a taut stock wire fence of 38” overall height from ground level to top strand, carried on posts 42” high between strainers 4’ high. The wires had some free movement within their staples so that tension was even along the length, enabling flexing and recovery under load rather than stretching and sagging. The fence presented a substantial barrier that should safely contain our livestock for the next 15 years, perhaps more (see pics: cattle and fence 1,2 & 3).Seen alongside the laid hedge, it represented the public face of our smallholding and I wanted it to look the part. After all, as John Seymour once said, if we don’t care what our countryside looks like, who will? n

This article is from Country Smallholding magazine’s January 2006 issue.To order Back Issues of the magazine click on the link to the left