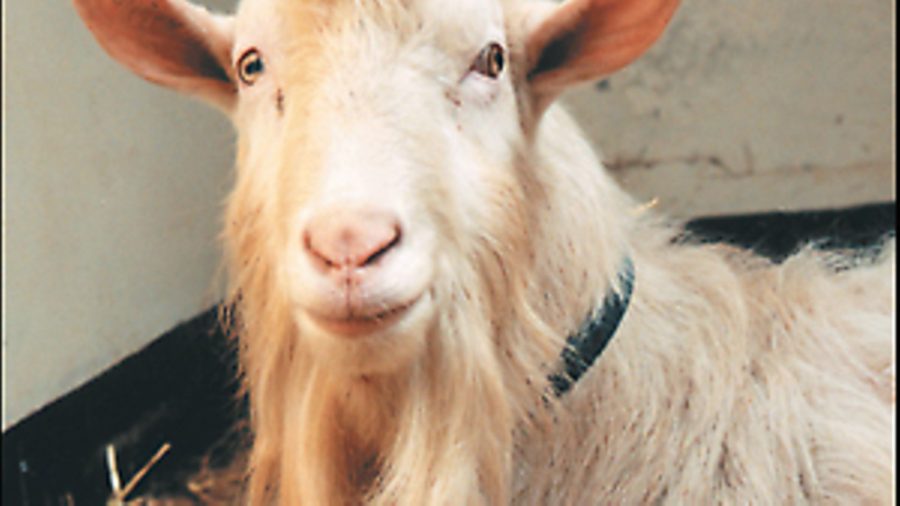 Although there are vastly improved Artificial Insemination (AI) facilities for goats in the UK, unfortunately, they’re not readily available in all areas, and most goat keepers will still have to rely on a natural service in order to get their goats into kid. This can prove almost as difficult in some regions as using AI because with health issues concerning CAE (Caprine Arthritis Encephalitis) and the restrictions on the movements of goats imposed by the Animal Health Regulations, there are fewer males standing at stud. The solution for some goat keepers has been a decision to keep a male goat on their own holding. This isn’t a decision to be taken lightly.Most modern dairy goats have the ability to remain in milk for extended periods, therefore it’s not always necessary to have every milker kidding every year to provide a milk supply for the household. Being herd animals, goats should always have the company of another goat. Owning two milkers will enable each goat to kid in alternate years, and with careful management and the use of an efficient freezer to store milk when there’s a surplus, only one excursion to a stud male would be required each autumn. Goats are seasonal breeders and females will come into season every three weeks from autumn through to the end of February until they’re successfully mated. If you don’t have the convenience of having a stud male on your holding, it’s important to be able to recognise the signs of a goat on heat. You don’t want to make wasted journeys to a stud male with a female not ready to co-operate. If you present the goat to the male too early and she won’t stand for him, she might have to return home. She would then need to be held in Defra-approved isolation facilities in order to visit again within the six day standstill period or wait until her next season three weeks later. If you’re lucky, the stud goat owner may have isolation facilities to enable females brought for service to be boarded for a day or two. This is helpful but can be expensive, as well as incurring an additional journey and adding to the goat’s stress.

Signs to look forA rhythmically wagging tail – which may be sticky around the edge or on the underside – accompanied by excessive and monotonous bleating are the obvious indications that a goat is in oestrus. Most goats will leave you in no doubt when they’re ready to be mated. Even the quietest and most docile animal will ‘call’ loudly when she comes into season. Of course, there are always exceptions. You need to be especially vigilant with goats that simply ‘stand and stare’. They will need watching on a daily basis. Often the only signs of oestrus that they exhibit are restlessness and maybe a disinclination to eat, but examination of the vulva will show it to be pinker than normal, swollen and puffy with possibly a clear sticky discharge. If you’re in any doubt, make a note of your findings on a calendar. There are goats that will cycle every 19-20 days, instead of the usual 21. Keeping a record of oestrus and mating dates is useful for checking if a goat has held to service and to establish the date she is due to kid, which will be around 150 days from a successful service.During September, oestrus may only last for a few hours and can easily be missed by the goat keeper – although never by a male goat running with the herd! During October and November, most goats will stay in season for 48 hours or more. As the winter progresses the duration and intensity of the heat will reduce. Consequently, the chances of a successful mating will start to decrease from December until, by the beginning of March, there’s not much hope of a successful mating unless the female is able to be in the company of the male for at least three weeks. The problem then, is that you may not witness the mating and, unless you’re able to use a ram raddle on the male, you can’t be certain he mated her.

MatingThe first time I witnessed a goat being mated was something of a revelation. The female was well in season and following a preliminary nuzzle of noses, the male was up on her back, penetrated her and, after a few thrusts, threw back his head and resumed his normal stance with all four feet on the floor. The whole exercise was completed in a matter of seconds and it was only the reassurance of the male’s owner that convinced me that the characteristic throwing back of the head meant that ejaculation had taken place.

Male goats on your smallholding

Given the difficulties that some goat keepers have in accessing a stud male, it’s tempting to consider having one on your holding. It’s sometimes possible to borrow a male, especially towards the end of the breeding season when he’s already been successfully used to cover the owner’s own stock. The problem is that if you’re not an experienced goat keeper with previous experience of managing a male goat, you’re unlikely to be considered as a suitable candidate.

The usual advice is that for just a few females, it’s not cost effective to keep your own male due to the initial cost of purchasing him, followed by the cost of feeding him all year and any medication he may need. In terms of convenience, it’s extremely useful to have a male on site because the smell of him often brings females into season, and if you’re interested in showing your stock, the earlier the kids are born, the more vigorously they appear to grow. In my experience, male kids that have been treated with kindness and respect from birth, grow into gentle and affectionate adults. However, don’t forget that, especially in dairy breeds, by the time they reach maturity, they’re very large and very strong, and the sight and smell of a female on heat can make them forget their manners. Writing almost 30 years ago in Home Goat Keeping, Lois Hetherington advises readers against keeping their own stud male. Her reasons are as valid now as they were then. The only difference is that 30 years ago, the word bio-security wasn’t in common usage for smallholders, and female goats didn’t have to be conveyed in transport suitable for hosing and disinfecting. We took our first goat to a stud male in the back of our Ford Cortina. We had no idea that his musky scent would adhere so overwhelmingly to our sweet smelling little goat. It took days for the smell to disperse from our goat and her pen. It took even longer to get rid of the smell from the car – despite the fact that we had carefully protected all the rexine upholstery. The additional costs of keeping a male and the need for strong, well-built and roomy accommodation for him are, I think, minor considerations. The biggest drawback is his smell. In the summer, in an airy shed in a field, it’s not too noticeable. But during the rutting season – which lasts at least five months of the year – the musk glands on the top of his head will be working conscientiously to attract any female goat in the vicinity. This pervasive odour clings to anything it touches and is difficult to remove. The slightest contact between him and your hands and clothes is sufficient to anoint you with his pungent scent. Once on your hands, it transfers readily to everything you touch and will contaminate anything from hay to the milking equipment. A quick wash with soap and water is unlikely to remove much of the smell, although iodine-based udder wash and baby wipes do have some success. The most practical solution is to have special billy-handling clothes. A long plastic coat or oilskin and a pair of gloves are all that is needed but they must be kept solely for the purpose and hung somewhere well away from the dairy and kitchen.

Feeding and wateringHis feed requirements are not very different to those of his female counterparts. He will require a mineral block, ad-lib good quality hay, forage, fresh greens and browsing, with a concentrate ration commensurate with his size and how much stud work he is doing. As a rule of thumb, his requirements will be similar to those of a goatling. The only difference is that root crops, such as sugar-beet and swedes, are thought to increase the risk of urinary calculi and are best avoided. The same applies to all other calcium-rich foods. These should be fed in moderation. Alfalfa (lucerne) for example, is an excellent feed but is high in calcium and must be balanced with grass hay.The presence of urinary calculi or stones in the bladder is sadly not evident until a crisis is reached and the urethra becomes blocked. Often, by the time it’s diagnosed it’s too late to save the goat. An operation is sometimes possible but can impair the fertility of a breeding male. To prevent urinary problems in males it’s imperative that they have clean water. Due to their less than endearing habit of urinating and ejaculating into their beards, the water in their bucket is rejected once the beard has been floating about in it. It’s therefore important that the bucket is emptied, cleaned and refilled several times in the day to ensure your male is drinking his full quota.The best way to learn about managing a stud male is to spend time on an established goat breeder’s holding. At this time of year, all mature males will be at their most potent and this is the ideal time to learn how to handle a male and discover for yourself whether you can a) tolerate the discipline entailed regarding protective clothing etc and b) stomach the smell which will at times seem to invade all corners of your holding.