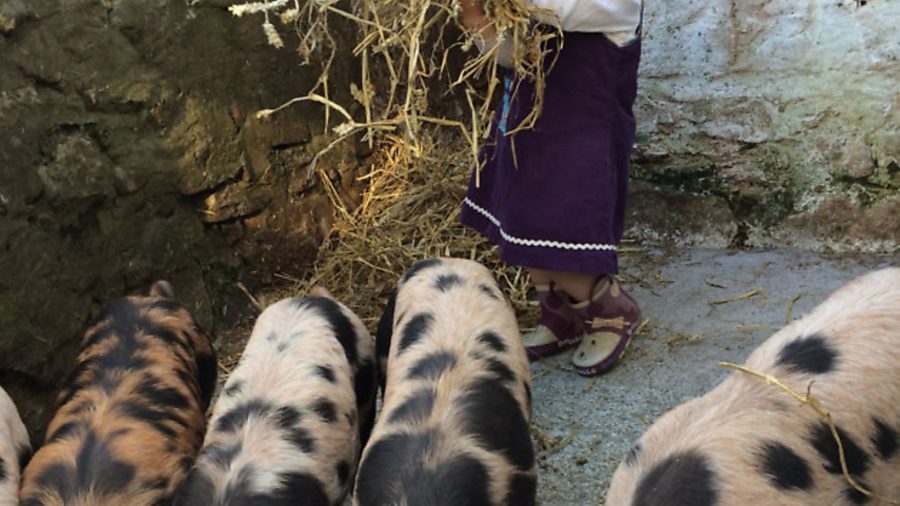 Veronica and Jules Hartley started their smallholding adventure three years ago – and have come on in leaps and bounds. They talked to John Wright Notwithstanding the ‘self-sufficiency madness’ slogan of Veronica and Jules Hartley’s Penybanc Farm, a 14-acre smallholding in South Wales where they arrived with a purpose three years ago (their animals being chickens, bees (two hives), pigs, a Jersey cow, ducks, geese and a Border Collie) I am happy to report that insanity does not appear to come into their operation at all.

With their daughter Melinka, who likes joining in, they are unassuming proof that any effort is worthwhile even if, like them, you have no previous farming experience. Jules has a qualification in natural sciences; Veronica calls herself ‘a real townie’. The first thing she did to spur her along was go on a smallholding course, run by South Yeo Farm West in Devon, where she was soon one of their star pupils.

Three qualities are easy to spot in this couple: a boundless willingness to learn new skills, an irrepressibly positive attitude and that old stand-by, a sense of humour. “YouTube is helpful,” Veronica says. “Jules learnt to plaster and tie sausages, amongst many other things, with the help of videos and lots of reading.” Other skills around the corner may well be permaculture and coppicing which Jules tells me they plan to do on a 10-12-year rotation.

Aiming to become “as self-sufficient for food and energy as possible”, their website’s ‘About Us’ offers a breathless account of their first year: “Trees overshadowing the house have been felled … 550 newly planted trees … brambles cleared, orchard is now neat and productive, new yard dug and gravelled, one hedge … laid, one field … fenced, one ditch … dug … highly insulated windows … solar panels … two wood-fired stoves and a thermal store … knocked down a wall to create a large kitchen, ripped down living room ceiling and plastered that room.”

They both have other jobs which help meet their expenses which include a mortgage, council tax and renovating the house and barns. Veronica describes herself as ’a solicitor, mother and smallholder’ adding that while a lot of farm work takes physical strength, she likes contributing financially – she presumably considers milking the cow with Melinka on her back a doddle. Her legal work from home is four days a week, while Jules does sporadic contract work as an IT consultant, often involving two-hour commutes to Bristol. “We’re always talking about when I stop working properly,” Jules says, both aware that the workload can jump such as in spring when everything grows.

Their pigs are the friendly (and tasty) pedigree Oxford Sandy and Blacks which they sell as weaners (around 8 weeks old) for £55-75, some of which have already gone on to win prizes. “We are interested in keeping the breed going,” Veronica says. “We register them if they’re good enough to meet the breed standards.” The temptation to over-extend themselves, which Jules calls “a bit kamikaze”, is illustrated by a recent offer of a fully grown sow which doubled their number. Veronica says: “We have a young pig a year away from breeding age. Fast-forward to having three sows and we would consider buying a boar. We send them off to a boar. We’ve used AI kits from Deerpark Pedigree Pigs in the past but not at present.” They also have another gilt (young sow), which will be butchered at six months for their freezer.

The couple have pig arks in the field, and keep them behind an electric fence which is moved around. They have a pig sty and plan to build some permanent farrowing space. They built a log store, have a polytunnel, renovated a barn, cleared brambles and dug ponds. “We borrowed sheep for a while and we’d like to raise lambs,” Jules says, for which you’d expect a Border Collie to come in handy. Alas, the former city slicker confesses that ’mollycoddling‘ has made her a disinterested onlooker. “We took her to sheepdog training classes, where she did well,” Veronica says, “but once we got her home she wasn’t interested. Most working dogs are kept outside, while ours is being spoilt rotten inside and plays fetch all day, so the motivation is somewhat lacking!”

Veronica and Jules have six ducks (Cayuga and White Campbell), five geese (two Brecon Buffs – of Welsh origin – and three Emdens a neighbour gave them), and about 12 chickens since a recent fox attack. They are trying to breed Australorps (having half a dozen of the black, docile, dual-purpose birds of Australian origin), and also have four Light Sussex and some Leghorn crosses.

The drama of having animals was highlighted in one sobering experience with their Jersey cow which they’d trained on a long tether “which we shorten”, Jules explains, “near the vegetable patch.” They weren’t prepared for one eventuality they had no control over – its first calf dying inside the mother. Their feeling of helplessness was offset by the joy of receiving unexpected help from a local farmer’s son who calmly pulled out the calf thus saving the cow.

After that incident they were soon producing more than enough raw Jersey milk which all three of them drink which, because they don’t pasteurise, they can’t sell. They now have a portable Italian-made milking machine (with cow and goat fittings, worth about £1,000) since visiting someone who had one, and the cow winters in a Welsh stone long barn. Another local farmer (of the same family) was kind enough to train the cow to accept the milking machine, as previous attempts had resulted in Veronica being kicked in the face. Veronica says about the farmer: “I think I made him blush by hugging him.”

A lot of the early work was clearing. “We had the romantic idea of doing everything with a scythe,” Jules says. They have old heavy duty slashers and billhooks they bought at agricultural fairs and “a very nice Swedish axe”. They also have a 12HP Hayter verge cutter for brambles, chainsaws, a Honda Rotavator (a present) for their half-acre kitchen garden, plus Rotavator and plough attachments for their 25HP Chinese tractor.

While Veronica and Jules feel they have less in common with commercial farmers, they feel indebted for their help. They’re also trying to arrange with local smallholder friends to cut and process hay in exchange for helping them. They try to help nature including small mammals and birds flourish wherever possible with wide borders, wild areas, two ponds, a stream and their 2½ acres of mature woodland.

One thing you sense about their approach to smallholding is a realistic attitude about how to keep the life they want going. Jules says they will always be partly subsidising the smallholding with other income. “The first lesson is that it’s not going to pay for itself without a savvy business plan. Pigs eat a lot and you have to pay for it. To keep land up to standard you need machinery and, until the mortgage is paid down, we can’t leave our other jobs.”

For every new decision they discuss the risks, one present example being whether going to three bee hives is best, knowing you can lose one occasionally. If they need a pub for these discussions the nearest is 20 minutes walk away, Veronica clarifying this in a very Felicity Kendal kind of way: “We try and cycle if we can.”

One thing’s for sure. So apparent is this couple’s affectionately tireless drive to make everything perfect in their country haven, no matter how much muck is involved, visitors need not be clairvoyant to know what might be in store for them when they arrive. I see a cup of tea in one hand and a shovel in the other.