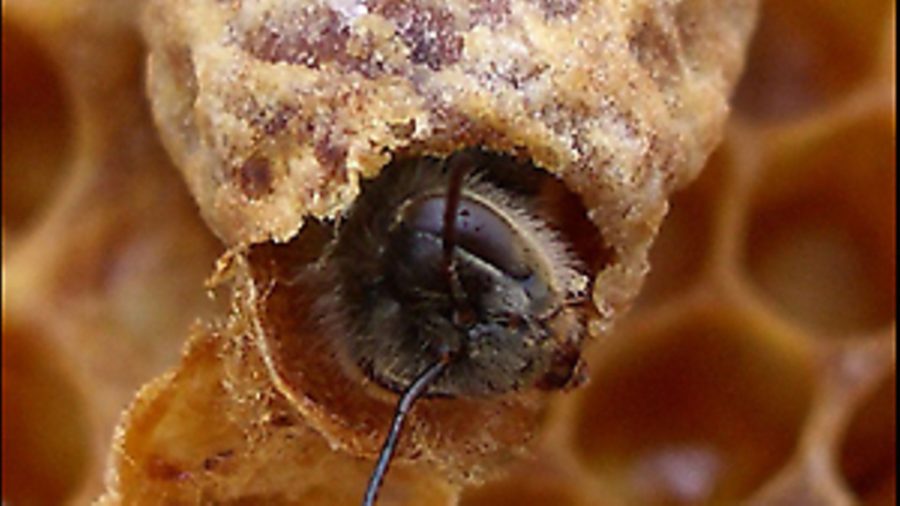 Anna Chambers describes how and why bees swarm

According to the pop singer Katie Melua, There are nine million bicycles in Beijing – that’s a fact. I wonder how she managed to count them so accurately and what would become of her song if one or two unfortunate cyclists crashed on the crowded Beijing streets? Would the song have to be re-written: “There are just under nine million bicycles in Beijing…” and so on? Perhaps I could persuade Ms Melua to visit my hive and count the bees – I can assure her that there are far fewer bees than Beijing bikes, roughly only 50,000 or so, give or take several thousands.At this time of year, the beehive gets crowded. In the darkness of the hive and without the luxury of being able to see where they’re going, it’s the queen’s pheromones, or scent, that control the colony, and in cramped conditions, it’s difficult for the workers to move around and catch the scent that gives them orders and keeps them under control. As beekeepers with limited olfactory skills, we’re not able to smell the queen so we must look instead for visual signs that swarming preparations are taking place.Keeping mumIn 2004, swarms were endemic, with a wet April preventing beekeepers from examining their hives. As soon as warm dry weather arrived, the bees were off. In 2005, swarms were few and far between. Colonies built up strongly in a mild autumn and there is every chance that 2006 will be a year of early and prolific swarming. Historically, and in countries that practice migratory beekeeping, bees are left to swarm as a means of increasing and renewing stock. A swarm consists of the old queen flying off with many of her workers and a hefty supply of honey in their honey stomachs. As they search for a new home, new queens are hatching inside the original hive, one of which will head the new colony. The others take off in much smaller cast swarms until no more swarms are needed. Remaining unhatched queens call from their cells when they’re ready to emerge, attracting the attention of queens already hatched, and are promptly stung to death. They would do better to keep quiet.At the end of the swarming process, one unmated queen remains in the hive with depleted numbers of worker bees and reduced honey stores. After a couple of weeks, when the new queen is mature, she will set off on a mating flight. The mating flight is risky for the queen and one fifth of queens don’t return. She needs to find an area where the male drones congregate to ensure fast and efficient mating. These areas are known, not surprisingly, as drone congregation areas and it’s only in recent years that they have been discovered. Back in 1707, Sir John More wrote in his book England’s Interest: There is a great contest amongst philosophical beemasters how the bees are generated: some are of the opinion that they never generate, but receive and bring home their seed from flowers; others say that they have amongst them both sexes, yet do not agree which are the males and which are the females.We have come a long way. Once mated, the queen returns to lay eggs that will take six weeks to become foragers. The result of the swarm for the bees is more colonies and a fresh productive queen. The result for the beekeeper isn’t so positive – a loss of honey and foragers. It’s time to take control of the situation.SignsIn the expanding spring colony, drone cells and queen cups soon appear. Drones are always produced, but they’re produced in greater abundance in a swarming colony. Dry and dull queen cups are accepted as the bees playing and not an indicator of swarming. However, cups that have been polished and charged with royal jelly and an egg are destined to become a queen cell.Having missed all these signs, the beekeeper’s next hint is the queen being slimmed down for flight, fewer eggs being laid and less comb being built. Bees will hang out together on the alighting board as if at a meeting, waiting for someone to make a decision. The time has come for you to step in and put your well-made swarm control plan into action.Regular inspections must take place every seven days over the next few months. It takes only nine days for swarm thoughts to turn to action. The table here shows how important the timings are.Some beekeepers clip the queen’s wings. This won’t prevent the swarm issuing, but it will stop bees being lost as the queen cannot fly away and the bees simply return to the hive. The queen, however, is lost if she falls from the alighting board and is unable to return to the hive. Regular inspections of clipped queens can be less frequent at 14-day intervals, and whether clipped or not, swarm control should be employed as soon as the desire to swarm is noticed.A swarming revolutionOnce swarm preparations have been identified, the beekeeper must act to prevent the swarm issuing. The most common method is artificial swarming, which splits (and later reunites) the colony to make the bees think they have swarmed. One of the simplest is  the Pagden method. It’s straightforward and can be found in many bee books and on the internet. It was covered in detail in Country Smallholding in May 2005, and in the interests of space, I won’t cover it again here.A new method for dealing swarms is, quite literally, a revolutionary hive. Solar powered, the round frames in the brood box are designed to revolve slowly over the course of a day, the theory being that the bees will be unable to build queen cells. Will it work? I’m sceptical. Regular weekly checks are  the key to a successful honey crop. Whatever your chosen method of swarm control, make sure it’s well-planned and that you’re ready for action. The next few months of the beekeeping calendar are the months for action, not holidays – in Beijing or anywhere else.

This article is from the May 2006 issue of Country Smallholding magazine. << To order back issues click the link to the left.