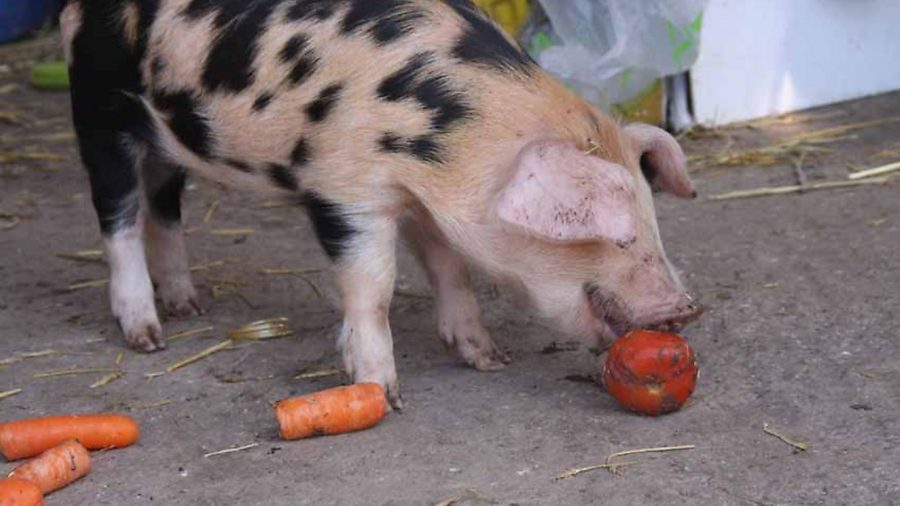 SEPT 18, 2013: Liz Shankland reports on an idea for reducing the cost of feeding pigs

Liz Shankland reports on an idea for reducing the cost of feeding pigsOne of the main things to force people out of keeping pigs in recent years has been the soaring cost of feed. When I started off, about a decade ago, I was paying less than £5 for a 25kg bag. Today, I’d be hard-pressed to find feed locally under £10 mark – and that’s often for a 20kg bag. Even buying loose feed, direct from the manufacturer, at three tonnes a time and with a big up-front payment, it’s hard to whittle down the cost. So it’s no wonder so many of us are looking for alternatives. As I’ve mentioned many times in previous issues of Country Smallholding (see CS February and March 2013), the feeding of kitchen waste to pigs was banned in the wake of the last foot-and-mouth outbreak. However, it is permissible to feed certain types of food industry by-products, subject to registration with your local authority, and provided safeguards are put in place to avoid any cross-contamination with meat or harmful substances, and if comprehensive records are kept. Organisers of a pioneering new campaign are taking the first public steps towards persuading the European Union that regulations should be relaxed to help farmers and cut waste. The Pig Idea (www.thepigidea.org) is the first concerted effort to encourage more use of safe, unwanted food as pig feed – such as bakery and dairy products, fruit and vegetables. It doesn’t take a rocket scientist to see that this would help pig farmers keep production costs down, and, potentially, allowing them to sell good quality pork cheaper. At the same time, it would reduce the amount of waste being sent to landfill, and lessen the impact on the Amazonian rainforests, where vast areas are being cleared at an alarming rate in order to grow soya for the livestock feed that we import. There could even be spin-off jobs created if specialist units were set up to turn waste into feed to sell commercially. As part of a pilot project in London, Stepney City Farm will be rearing a group of pigs on safe waste including spent brewers’ grains, whey, vegetables, and bread. The pork produced will be served up at a free ‘feast’ in Trafalgar Square to raise awareness of the campaign. I’m right behind the aims of the campaign, but slightly concerned about three things. Firstly, I hope that the London experiment doesn’t confuse people into thinking that ALL food waste can be fed to pigs. Secondly, feeding pigs exclusively on waste won’t guarantee a nutritionally-balanced diet, so you have to know what you’re doing and be prepared to buy in dietary supplements. And lastly, should the feeding laws be relaxed, I wonder how long it would take food producers to think that, if there’s a demand for their waste, they should charge people to take it away?